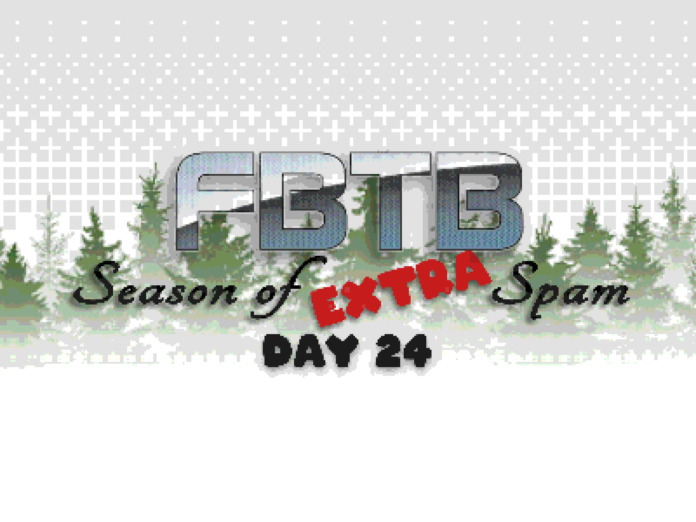 Here we are again, on the last day. Ace got his pictures in at the 11th hour, Nick remembered to come in and edit his post to remove eighteen paragraphs worth of text that he’d put in to a nice succinct twelve pages, and Eric might actually be dead now from all the hot sauces he ate,  so we’ve replaced him with a Roomba. 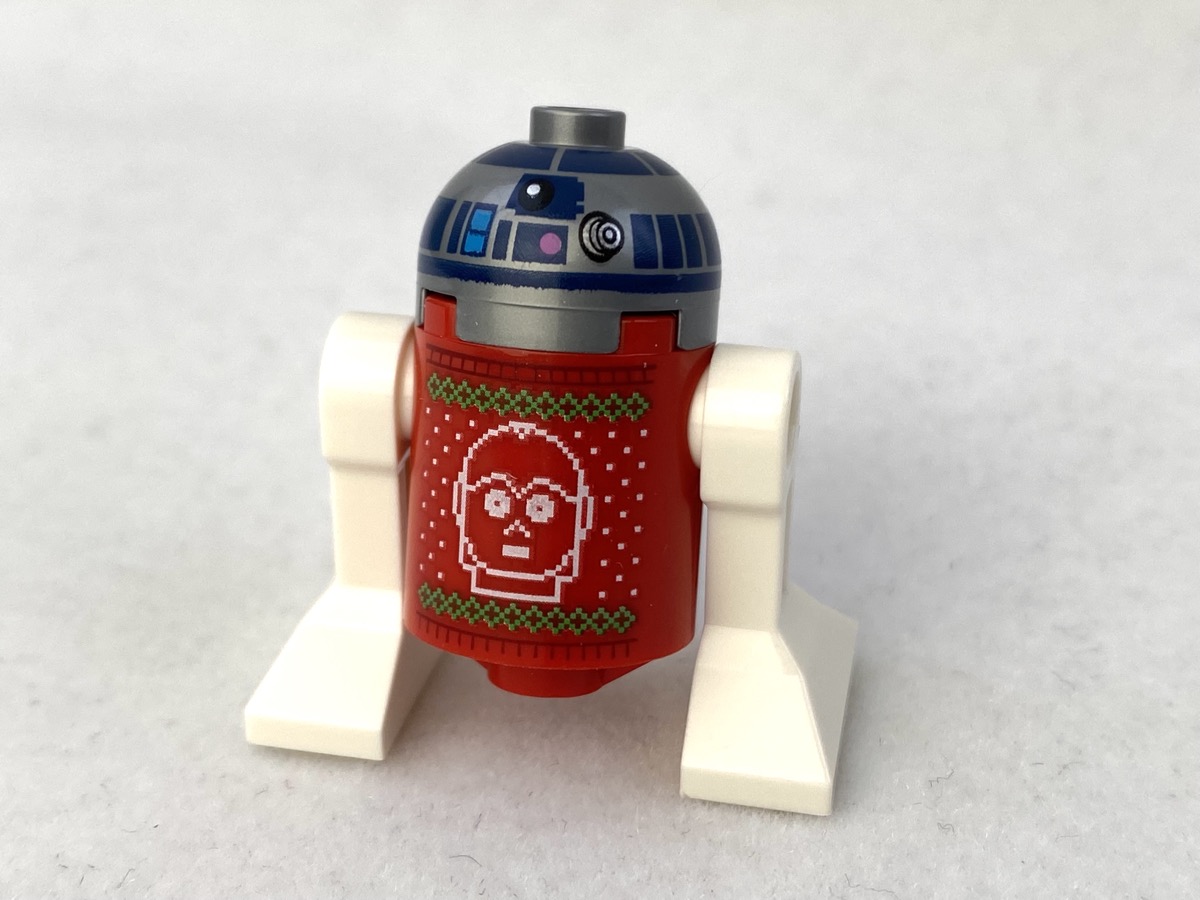 At last, we finally arrive at the last day of the Advent Calendar and we’re treated to an R2 unit wearing an ugly Christmas sweater. R2-D2 here is wearing a sweater emblazoned with C-3PO’s head. A nice counterpart to Threepio from Day 9 wearing a sweater with R2-D2 on it. Only besties would be that coordinated and be willing to wear clothing with the other person’s likeness on it. I realize I said person when referring to mechanical automatons but you get my drift.

Today’s build is quite the winner, ending the calendar on a good note. The average is exactly half: 50% good and 50% bad. If we were in school, that would be a failing grade, so this entire calendar gets a thumbs down.

For 24 days I have been putting one tablespoon of hot sauce in my stomach. That’s a cup and a half, which actually doesn’t seem like that much, but now that I’m looking back, this more than anything has outshone my Christmas season.

Thank God it’s Christmas Eve so I don’t have to do any more.

Fittingly, today’s build has nothing to do with Christmas, a great continuation of the last 23 days. 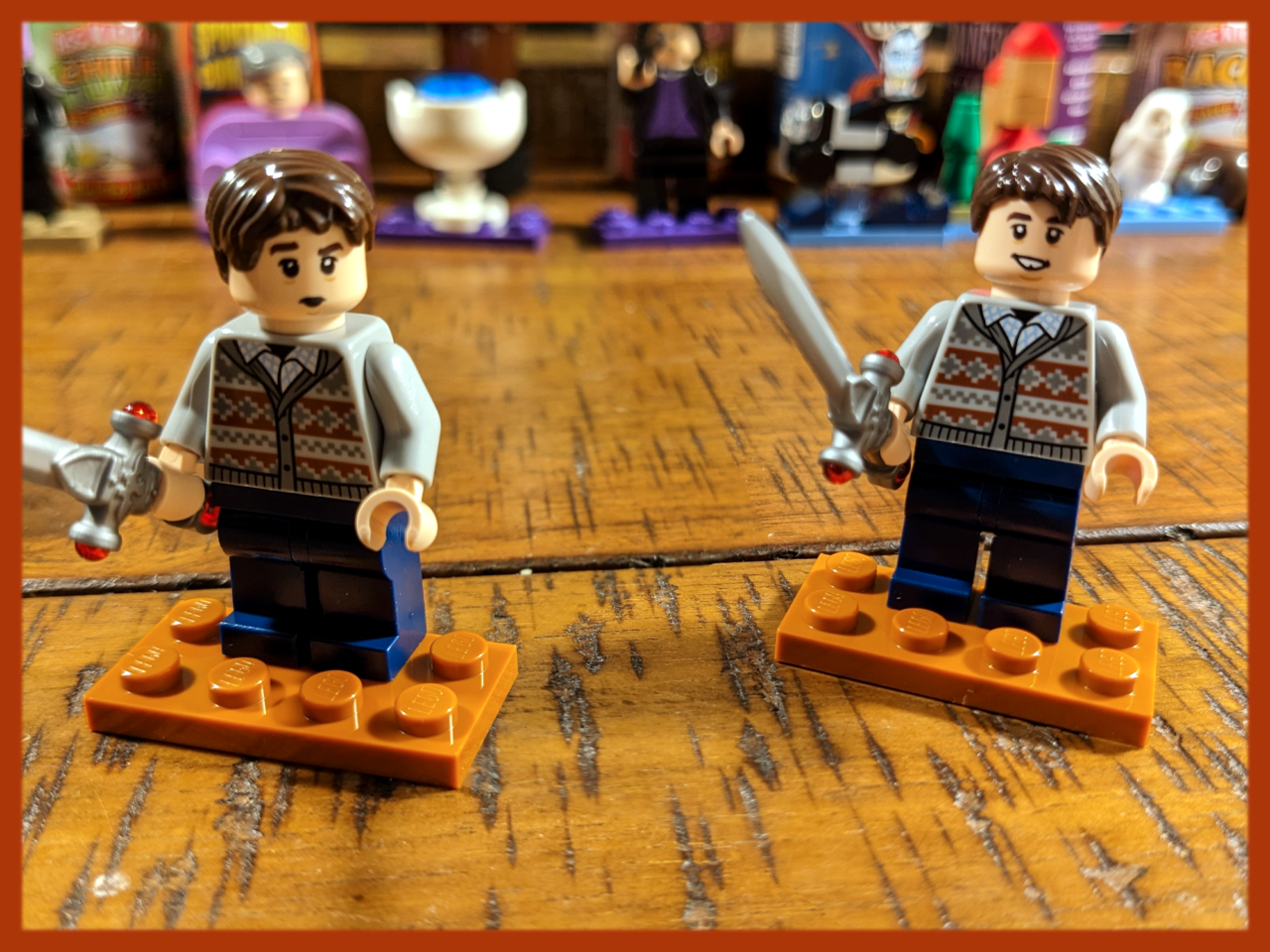 This minifig is fine. I’m just bitter that literally nothing in this calendar has anything to do with Christmas.

Today’s hot sauce – HOT SAUCE FROM HELL – is another version of day 1’s hot sauce, which couldn’t have been more circular if I’d planned it. But I do think it says something about how much my tolerance has grown that I barely felt this one. Or maybe it’s just that I’ve lost a piece of my soul along the way. 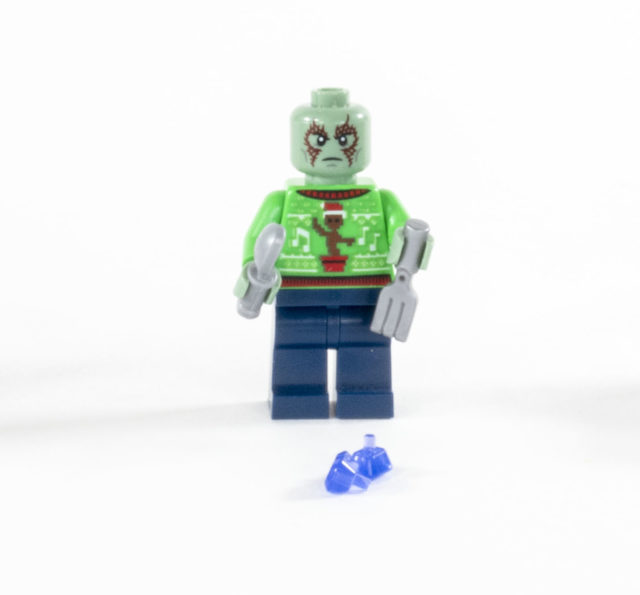 There’s something nice that this wet turd of a calendar isn’t going out on a low note, I guess. All of the minis should have had torsos like this, especially Mantis and Peter, which would have been directly on-theme for the Christmas Special, where they both were a lot more festive (where Drax was not). So this one is a hit, at least. 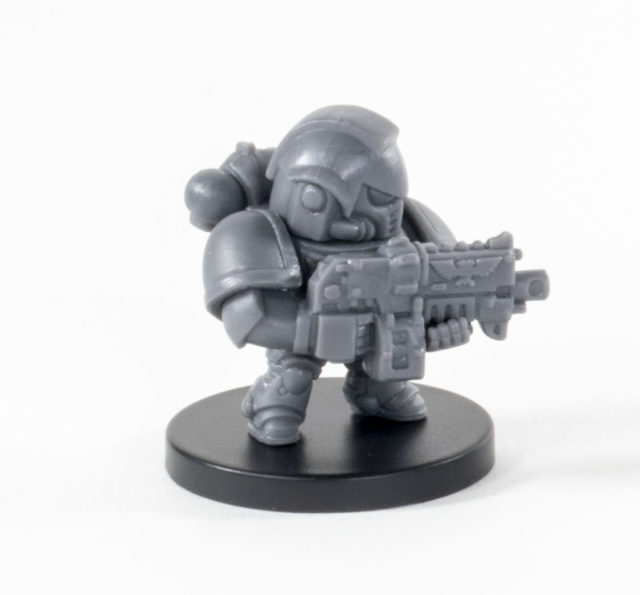 The last day isn’t a chapter, but there’s honestly nothing more representative of Warhammer than this, a simple, unpainted, gray miniature (or grey, because, you know, they’re a British company). I’ve talked about the goofy lore about Warhammer 40k, some of the history of it, and the fandom that can give the bonkers and often infuriating nature of Star Wars fans a run for their money.

Those are all part of the attraction of what draws me to Warhammer, but not the biggest part of what keeps me there. In the end, really, it’s the simple plastic guys. They’re not cheap – they give LEGO a run for their money on cost (though, thanks to the stupid escalation of UCS and adult collector sets, LEGO is a vastly more expensive hobby).

I’ve been into this game several times in my life, and got back into it when COVID first hit. It was a rough time for all of us, and sitting at home, these little guys kept me sane while my family and I were all stuck inside. I’ve found that it’s the sort of thing that can scratch multiple itches of things I want and love. I can build things, I can do hobby things, I can play games, and I can get social fun. I’ve made new friends, gotten into new communities, and found a ton of new things to watch and enjoy.

Of course, the purpose of these minis isn’t to stay as gray plastic, it’s to get primed, painted, and turned into something else. So… obviously, I need to turn it into something. Blood Angels and Ultramarines, the two chapters I collect, are already on done. So, I’m open to suggestions or ideas. Obviously, I should figure out something custom.

Maybe we need an FBTB-themed Space Marine. What would the colors of the Bothan’s Chapter be?