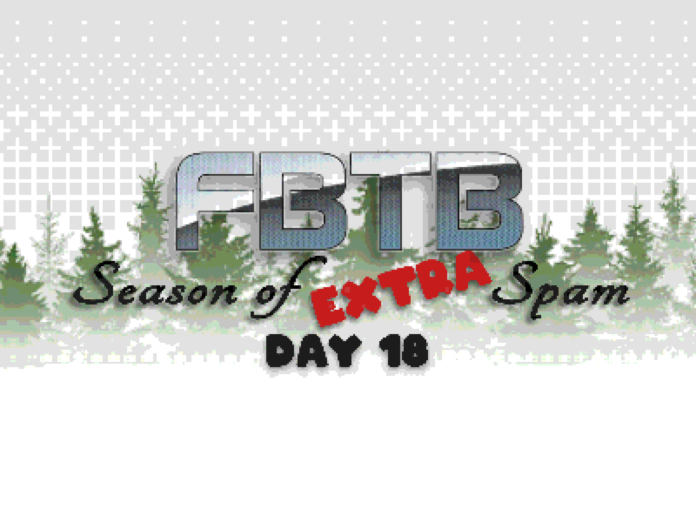 We never know if people read these, and maybe we should start planting secret messages here instead of short snappy quips. Honestly, some of these have been so forgettable it’s hard to even remember what yesterday was even about. 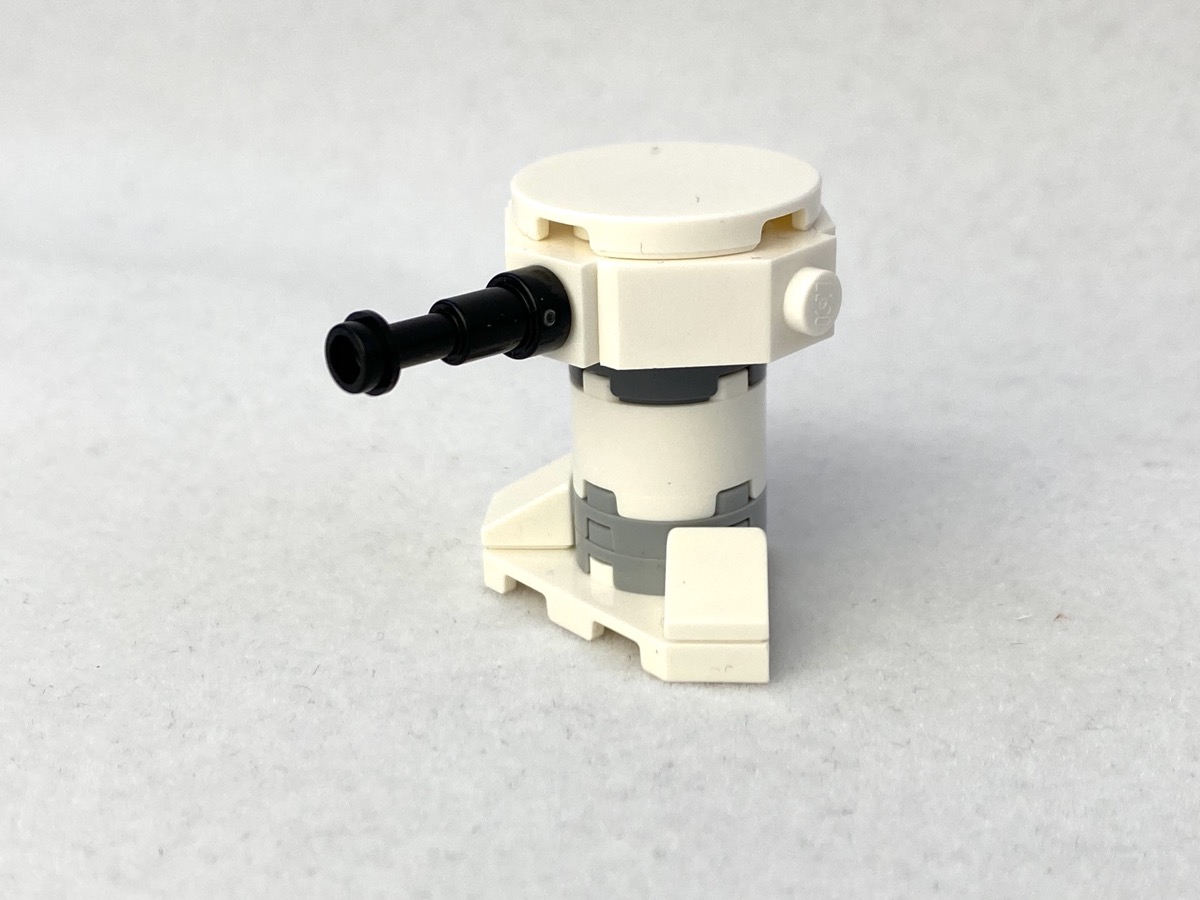 Okay, just when I thought the Hoth well has run dry with advent material, here we are on Day 18 with a Rebel turret. Maybe they’ve done a turret before, in the old days, the days before we started with Season of Spam. With yesterday’s Snowtrooper, and today’s turret, methinks we’ll be getting a Rebel Hoth Trooper tomorrow. But getting back to the turret, it’s actually a pretty nice mini / micro build. The turret rotates fairly easily without falling apart and it looks like what it’s supposed to look like. I know that sounds like a low bar, but these aren’t exactly hundred dollar sets here. Thumbs up from me.

Let’s wrap up the builds from Half-Blood Prince – LEGO can’t mess up a minifig, can they?

Oh, sure they can. 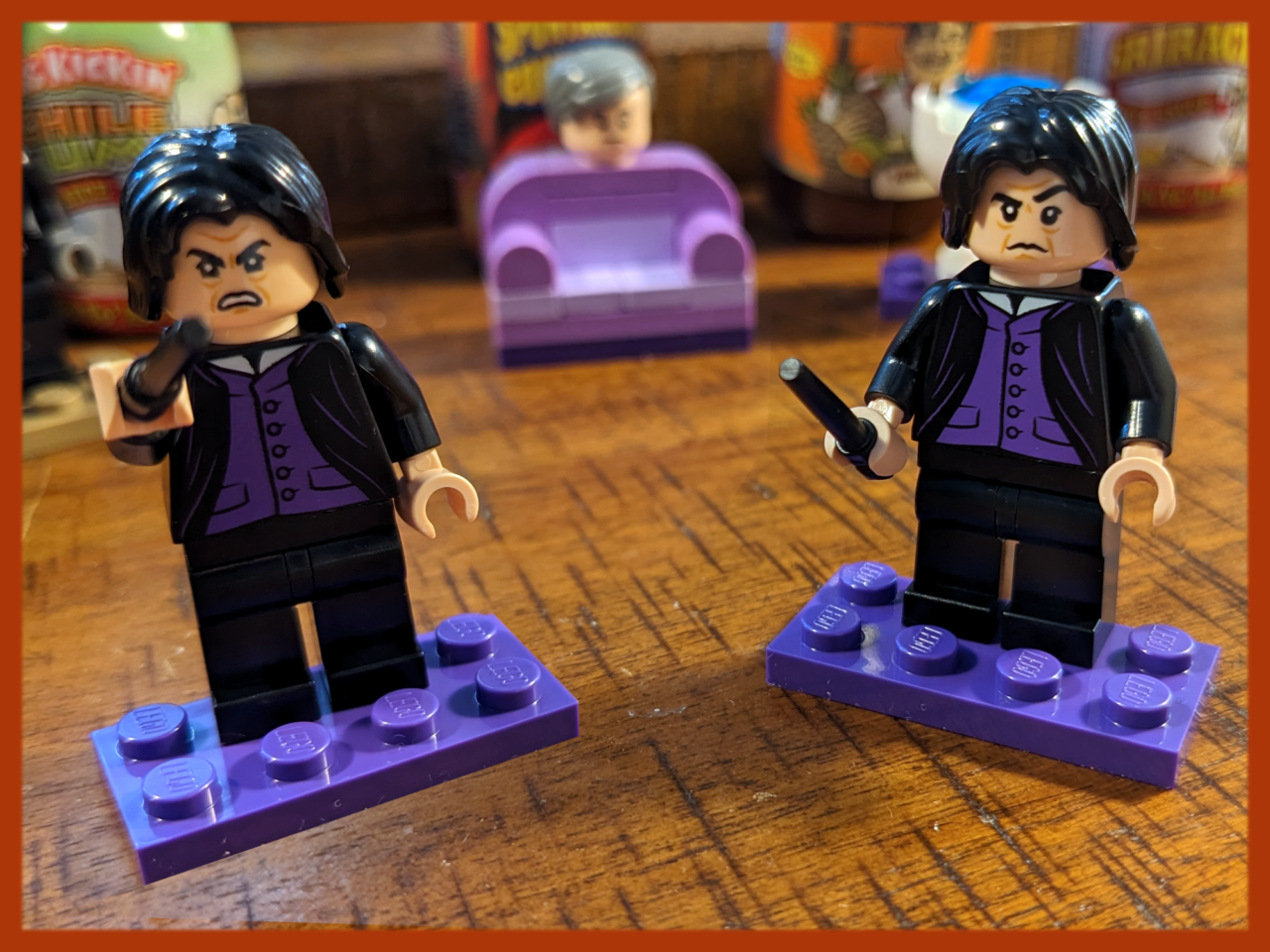 It’s Snape. The same Snape that you’ll get from two other sets. It’s again hard not to feel disappointed with the minifig collection in this calendar. Like, I know HBP is kinda Snape’s movie (in a way), but there are better characters, especially that we haven’t seen in minifig form yet. How about young Tom Riddle? Or someone from Slughorn’s Christmas Party? Anyone that’s not in a set I can grab for 30 bucks?

Today’s hot sauce – ASS KICKIN’ SRIRACHA – is terrible. The worst tasting so far – but I’m not a huge sriracha fan. Man this has been a rough few days.

We get six days to cover the Deathly Hallows (and then we’re done!). My expectations are unfortunately not very high. 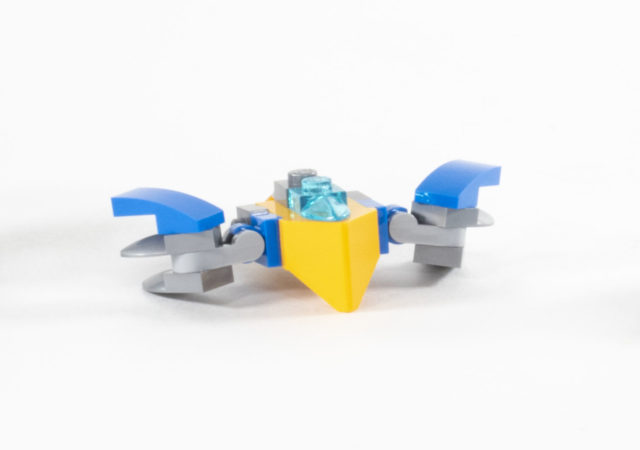 Ah, the Milano. I have a love and hate relationship with this ship in loving the first one, and… not loving the second one. This thing is… I don’t know. Like yesterday’s build, the proportions feel very off-putting, but it works a bit more. The Milano is a fairly chunky ship. It’s light on parts, but that works in an advent. While the snowman was just below the line, this one is just above it, albeit barely, so I will grudgingly give it a hit.

Another one of our original Legion, the Salamanders, are considered the chapter that cares about humanity the most, and often go out of their way to protect the mere mortals around them. In that they don’t just leave them all to die when things go really sideways. I mean, sure, they’ll still commit all sorts of atrocities, war crimes, and genocides in the name of the Emperor and humanity, but they will also give the occasional hug. And that’s what’s important.

They’re… an interesting bunch. Some of the origins of Warhammer 40k are not exactly the best, and Games Workshop has corrected some of it over the years, the Salamanders have kept some of their stuff. The name is not based on the cute little lizard, but more the mythological one, thus the dragon as the logo, so the fire thing. Their Primarch, Vulcan (yeah, bit on the nose there), ended up on a lava planet…

… I suppose I never have really gone into that part of the lore of 40k, because it sort of goes into a lot of what messed things up in the first place. Despite the fact that all of the Primarchs refer to the Emperor has their father, they are more of a science experiment than offspring. They weren’t born, they were made. As in, they were literally a science experiment that in the end went a bit off the rails. The technology, like all technology in the year 30,000, was recovered from parts unknown.

You see, the whole Great Crusade was the process of re-uniting humanity after the “Age of Strife” of the preceding 5000 years that was basically the fall of the humanity. Turns out, humanity and the whole galaxy was pretty awesome for a long time, building a massive empire, having some wars, expanding across the stars, etc. And then things went… badly. Maybe it was psykers, maybe it was Chaos, maybe it was AI gone wrong, maybe it was all of that. But basically humans went all caveman, got trapped on all their various planets, and things went bad.

Fast forward 5000 years, and the Emperor decides to build a bunch of new warriors (the Space Marines) to replace his old warriors (the Thunder Warriors) that he genocided because they were outliving particular usefulness and needed something new. But to make the new things stable and start his Great Crusade, he made 20 different progenitors, his Primarchs, to serve as the templates for the legions. I mean, presumably, before humanity was united and he decided to genocide them. Yeah, if there is one very constant thing in the lore of 40k, is that there is no bigger dick than the Emperor of Mankind.

Once they were made, though, something happened – literally, that is the whole of the explanation – something happened and the infant Primarchs were abducted and scattered across the galaxy to different planets. Yeah, Warhammer thought it up well before JJ Abrams crapped out the worst plot basis of a Star Wars film with “somehow, Palpatine Returned.”

All of the Primarchs were a reflection of the nature of their Legion. The Blood Angels weren’t called that just because Sanguinius was noble and hot, it’s because dude was noble, hot, and had wings. The Iron Hands were named because a writer was exceptionally busy one day. The Salamanders were named because Vulkan was on a lava planet and has dark ashen skin, is immune to fire, and really liked melta and flame weapons.

Oh, yeah, so, that problematic part. Turns out that racial diversity wasn’t exactly the best thing in a setting written by a bunch of British guys in the 80s and 90s, so they were pretty mono-culture and tropey with some things. The Salamanders were the dark-skinned chapter, and the only ones ever portrayed like that for a long time. The White Scars had a similar issue, as I’d mentioned – the Blood Angels did as well on the opposite end, being done as white and blond because that’s how Sanguinius was shown (though was also described with brown hair).

Obviously, the in-lore has been “because they’re with the fire” but still, not always the great look. Beyond that point, though, the Salamanders as a chapter do love their fire. And flamers, melta (guns that basically shoot balls of fusion energy), and guns like that. Their primarch also had an interesting habit of dying, and getting better. He was a Perpetual, so he would regenerate, return to life, or things like that.

Which is how he managed to survive the Drop Site Massacre while his brother, Ferrus Manus, went the pro-level Ichabod Crane cosplay route. He didn’t exactly escape, though… since he ended up captured by one of the traitor Primarchs, Konrad Curze, who the one who was just flat out bad (and open about it) – like, murderous and brutal to the point of censure. He wasn’t seen as a hero like the rest, he was feared and loathed. Also, likely insane, because he could see the future, and that drove him mad. So he spent most of the Heresy killing Vulkan, having him come back, and killing him again. For fun. Eventually, Vulkan escaped, died a few more times… including once by traveling to the Ultramarines homeworld. As in the surface of the planet. From Space. Without a ship.

He got better, eventually.

While none of his chapter seem to have gotten the immortality bit, they absolutely revere their Primarch, because, let’s be honest. Dude is a bit of a legend. He vanished after the heresy, but left a bunch of clues around that the Salamanders are convinced they need to find in order to bring about his return. So basically, the Salamanders are about flamers, melta guns, hugs, massive wars, and scavenger hunts.