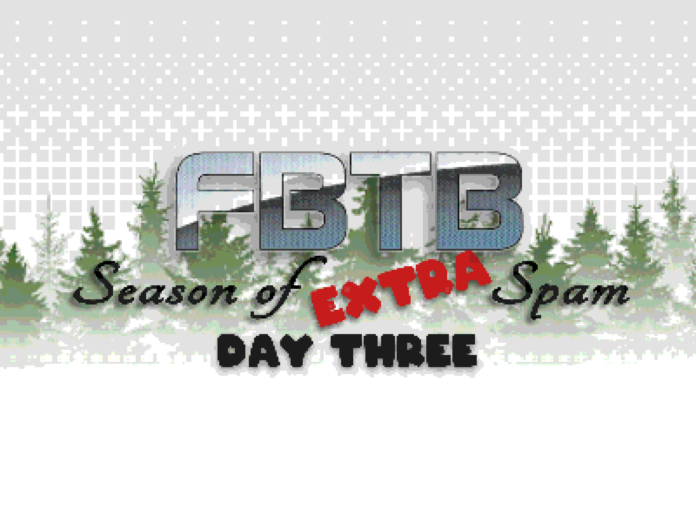 Our annual tradition moves along, another batch of Advent Calendars. Ace handling Star Wars (again), Eric handling Harry Potter (again), and Nick handling Marvel (again). We’re adding a little twist to this and doing our own bonus calendars of silly things, so Ace has fallen for our peer-pressure, Eric is sampling Hot Sauces that may kill him, and Nick is enjoying indulging his stupid amount of knowledge of the world of Warhammer 40k through little chibi Space Marines.

I like to say Day 2 is really where things start averaging out. If LEGO pushes out a cool build for Day 1, it’s never cool on Day 2. Ace got a clone minifig, so at least he can add it to his army. Nick got a fake Walkman that doesn’t even fit in the box that comes with it. And Eric got something that he could build easily even while fighting back the effects of a ghost pepper. So he’s happy, at least. 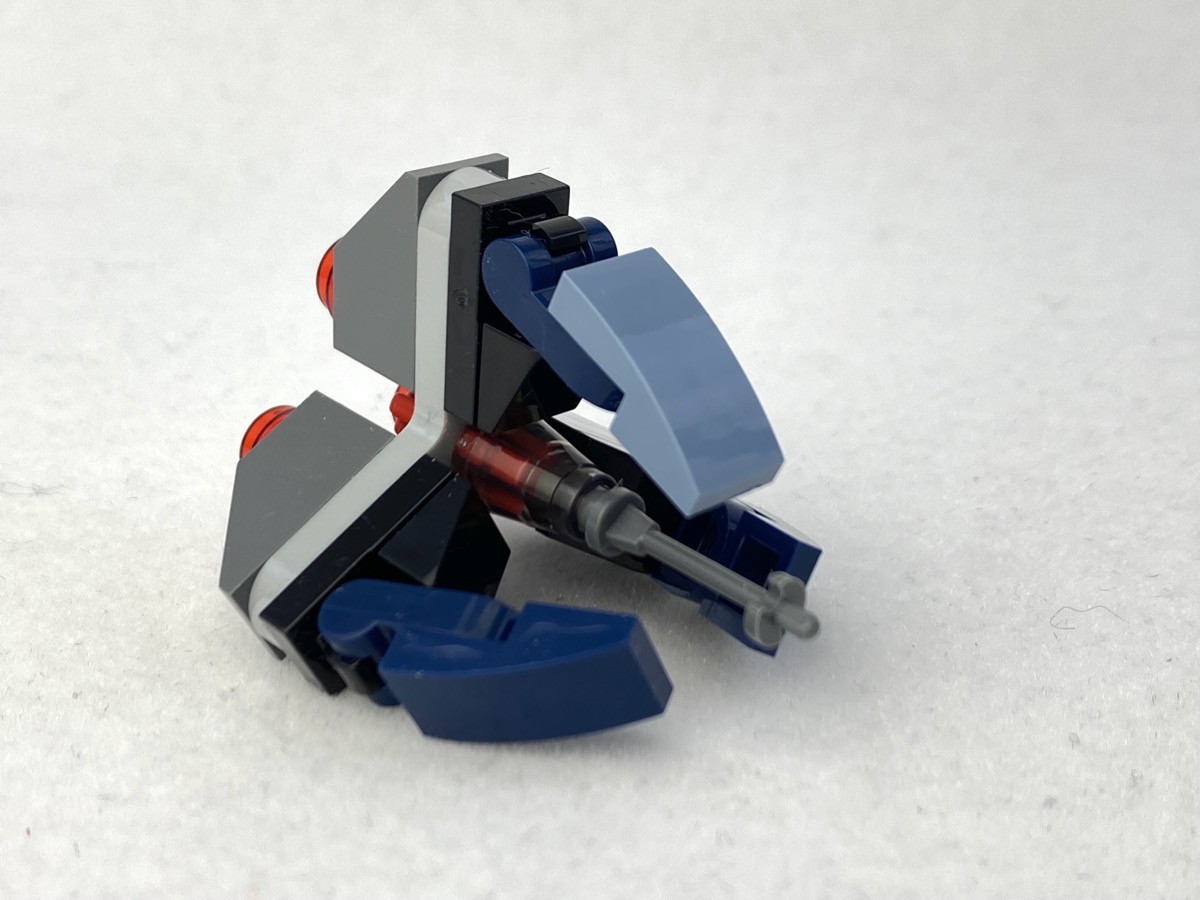 A Droid Tri-fighter! I haven’t done all of the LEGO Advent Calendars in the history of mankind so I don’t know if this was ever done in the past, but today’s model is a really nice rendition. The use of the cheese slope to lock in the angle of plate calms my OCD. It’s really just a neat build. Day 3 and not a stinker so far. We’re due up for some major let downs.

My other themed calendar hasn’t shown up yet. Maybe today or tomorrow. And once they show I’ll go back and edit the previous days’ posts.

Yesterday was bad. Like, really bad. Unfortunately, I looked at the ingredients of some of the other hot sauces I have, and it will get worse. Possibly a lot worse.

Both the hot sauce and the LEGO today have one thing in common – I don’t want either of them. 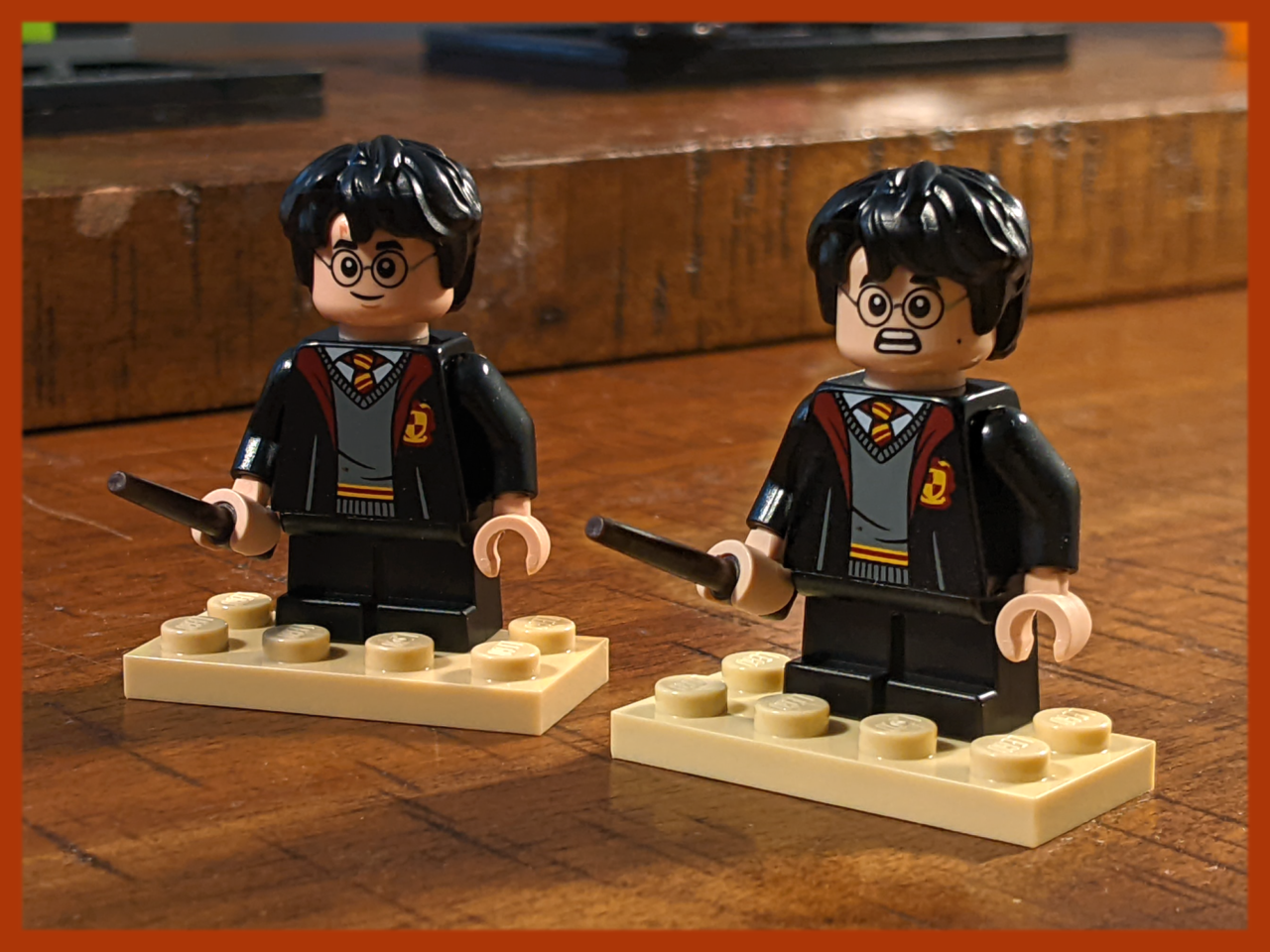 This is the fourth year I’ve done the Harry Potter Calendar, so at this point I’m just completely tired of seeing Harry Potter. Like, I get that we have to have him – that goes without saying. I just wish there was more creativity put in other than just “Hogwarts Robes”. So far, this calendar has completely abandoned any sort of Christmas theme, which means there’s no rules. Give me pajamas Harry Potter. Or cursed fish man Harry Potter. Anything but Hogwarts Robes again!

For the hot sauce – ASS KICKIN’ WASABI – the best thing I can say is that Wasabi never last very long. The heat was gone around the time I finished recording, though the nasty wasabi taste still lingered.

Two thumbs down for these two. 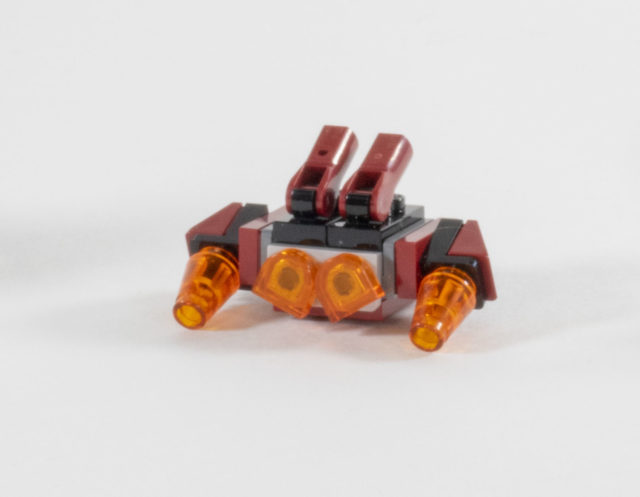 First things first, I know that the Prison Drone is upside down and backwards here in my picture. Going to be honest, didn’t care enough to flip him the right way, because this is how he was pictured on the nominal amount of instructions that LEGO provided and they couldn’t be bothered to show the orientation of how the drone was supposed to look.

It is the right color, though, which is a nice touch. I honestly couldn’t remember, since they were in the movie so briefly. So, yeah. Here’s an upside down drone. It’s not a bad little representation, which could have done with a way to prop it up a bit, but I’ll still give the little micro-ish build a nice hit.

Ah, the Black Templars. There’s a common little saying among 40k fans… “there are no good guys in 40k” – and it’s true, there really aren’t. There are only a whole lot of shades of very, very, dark gray (or grey, since this is a game from the UK), and black. Well, except, the Orks, they’re just innocent and silly, only want a good fight, and their technology works basically through a magic because they believe it will.

The Imperium of Man aren’t good, they’re an oppressive tyrannical and totalitarian regime built around a religious cult that worships a corpse demi-god Emperor trapped on a golden throne. It’s built around genocide, intolerance that could easily be called fascism (though that’s a whole bigger debate), and the whole universe is the epitome of “grimdark” where war isn’t just constant, it’s the only option for survival for everyone. The Space Marines don’t exist to protect the Imperium, that’s a happy biproduct… they exist to enforce the Empeoror’s Will (and in truth, the whim and will of the bureaucracy of the Imperium) on whatever they decide is a danger.

What does this have to do with the Black Templars? Well, they take that whole idea and turn it up to 11. They were formed out of fanatical devotion as one of the first chapters after the heresy, by a particularly devote member of the Imperial Fists (more on them later) who was one of the first converts to the “Imperial Cult” – belief that the Emperor of Man (actual name) was in fact a god. Then they built a whole army to kill anyone that didn’t believe or dared challenge it. And any Xenos (aliens), Pskers (wizards), or generally undesirable things (anything they felt like) along the way.

Basically, they’re a bit touchy, is what I’m saying. I have to ding this little Chibi guy, though, because he lacks a devotion chain, and all Black Templars chain their weapon to their wrist and will not remove it until all enemies have been slain and victory has been achieved. Normally, I’d make a joke about how that’d make it hard to use the bathroom during a prolong engagement, but the lore of 40k has that covered with the space-marine implant called the Black Carapace.