My feelings about Episode II: Attack on the Clones are very much a matter of public record at this point. It’s easily the lowest point of the first seven movies. I haven’t seen Episode VII, but unless it’s a shot-for-shot remake of a community theater version of Hobgoblins with the players all wearing blackface, I can’t possibly imagine that it’ll be worse than AotC was. Though I do like the implication that I just totally jinxed it.

All of that being said, I actually like a fair number of things and sets based on the movies. How clones were used is kind of dumb in the prequels, but it was really a missed opportunity to play on some pretty deep moral themes in the movies with their use (something that the Clone Wars cartoon actually did well, even if it was a kid’s show)… yet Clone Troopers are pretty cool as minifigures. It gave us the Republic Gunship, a bucketload of Jedi figures, and the Jedi Starfighters I like to make fun of and yet inexplicably own every single one (multiples in a few cases).

One could make the case that this is just a glorified battle pack, but you would be wrong, because battle packs have more figures than this typically. Honestly, the only reason I even decided to review 75085 Hailfire Droid is because I hadn’t reviewed one yet (Ken didÂ the last one, though I did own, and not like, the set). At least that version came with a spider droid… this one just comes with a Clone Trooper Lieutenant, a couple of super battle droids, and only 163 parts for you $19.99. It’s also exclusive to Target in the US, so… not a great start.

After building and taking pictures of the thing (which all turned out orange-ish for some reason), I gotta admit… less than enthused to reviewÂ this set. I’ve been sitting on these pictures for months by now, and mostly it was intended as a filler review when I didn’t have bigger things. I still have bigger things to do, but I just sort of want the review gone. 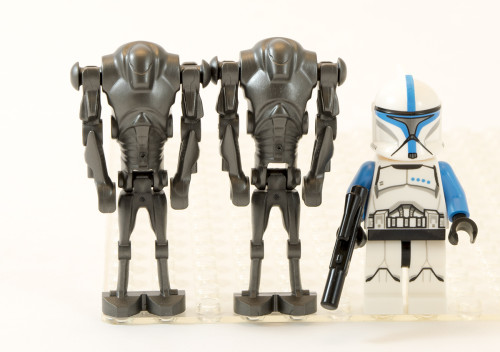 Minifig wise, pretty much our clone buddy and the stock Super Battle Droids. Dear LEGO… if you want to get us enthused about battle droids, may I suggest bringing out the old Geonosis types, or the gun arms, or… well, any difference. We have eleventy zillion of these guys, so do all the kids out there. There is nothing different about the SBDs, so those pictures can do for them. 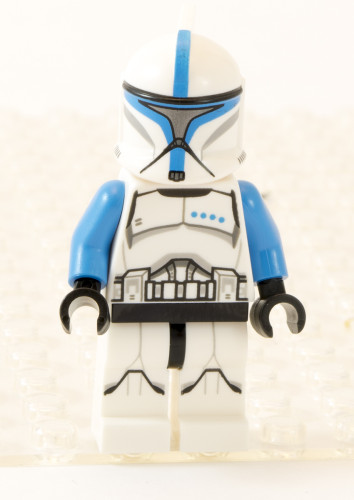 Maybe it’s just me, but that visor printing on our little clone buddy looks especially nice. He’s not unique… sort of. He was released in 2013 as a polybag for Star Wars days volunteers, and then as a promotion in LEGO stores. He’s a Clone trooper… with blue arms.

He’s got the standard clone head as well. At least it makes sense on Clones, instead of on all the Death Star, Republic, Storm Troopers, and First Order troops. That’s just laziness. 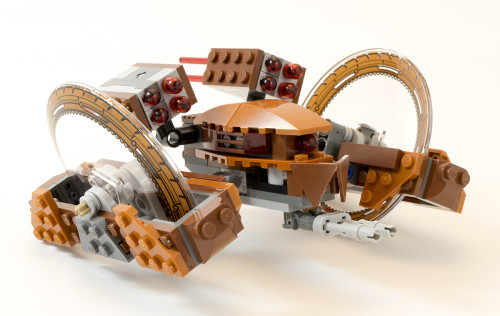 The Hailfire Droid is a set that LEGO has been attemptingÂ (and typically failing) for years. The original technic set is still probably the best rendition, because it’s the largest. While these were only really seen in the background of Episode II and III, they have just as much crazy background information as everything else, and the IG-227 Hailfire-class droid tank was 8.5 meters tall. Most people in the world can visualize that immediately, but us unwashed ‘mericans don’t do none of that there metrics systems (8.5 meters is just under 28 feet tall). That makes this droid just slightly shorter than an AT-ST (8.6 meters). LEGO’s versions of this vehicle are clearly not as tall as an AT-ST. 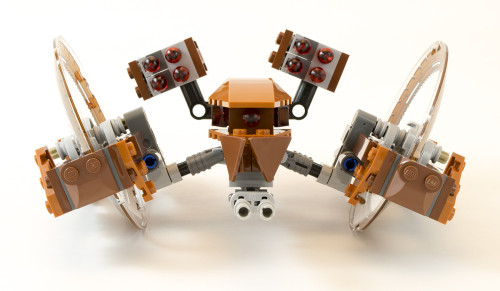 In a lot of ways, this thing isÂ both a downgrade and an upgrade from the previous version. The most notable downgrade is the lack of tread links. The real highlight of that last set was the addition of smaller treads, and the reason that some of us may have purchased more than one version of the thing. 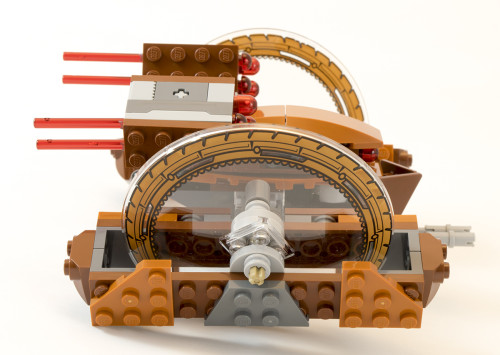 For some upgrades, a lot more thought was put into the wheels on the side, and the structure to hold them in place is a lot beefier. It at least stays on, something that the last one was fairly challenged with. 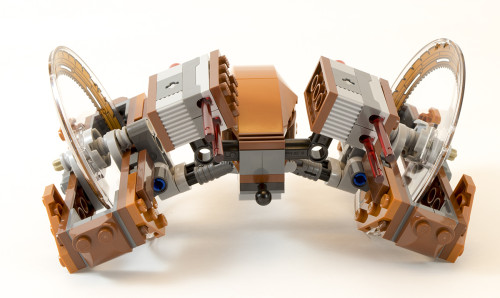 The bigger problem, however, is that the entire thing ends up being far too off-balance, and that weight just serves to tip it backwards. So, if this is a rocket artillery platform, it can get a nice strong parabola. But the rest of the weapons are pretty useless. Luckily, these things were mainly very expensive rocket launchers. 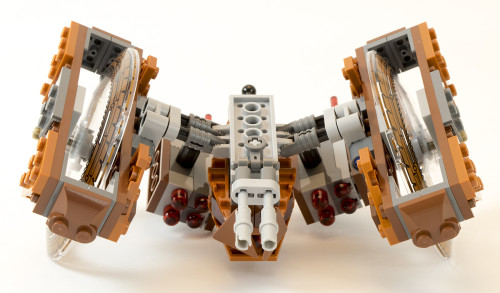 They did incorporate the new flick-fire launchers (or spring launchers, whatever… you still have to flick them) into those rocket packs, which really just makes them look far too bulky take a look at what the vehicle is generally shaped like… 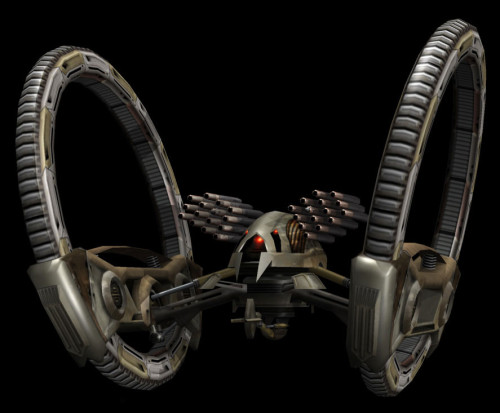 It’s mostly wheels and rockets, with really being mostly wheels. I get that this would be an especially difficult LEGO build, but maybe that’s as much a problem with price point as anything.

Everything about this vehicle is pretty much wrong, and the build loses out on the things that made the last version an attractive purchase, like the selection of parts. The lack of treads, more parts being tied up in technic stuff, and all those Â launchers all make this a lesser set than the last one.Â Even though this should be a good set, as it’s one of the few in the $20 range anymore, it just falls short. You’re better off spending your money elsewhere, and this guy is aÂ two out of five, tops.

Verdict: 2 out of 5.Â You can buy 75085 Hailfire Droid right now on LEGO Shop. Or, if I may suggest some better sets like the Battle Packs or the Marvel Carnage/Miles Morales set. 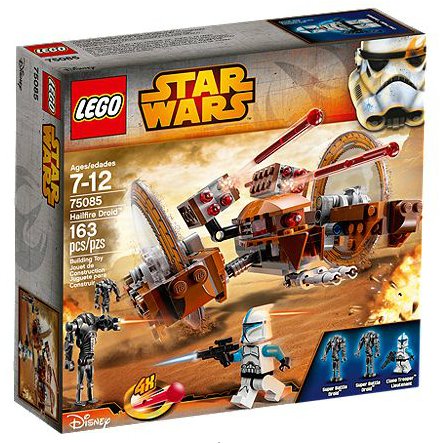