Apologies for the delay regarding the Lego Masters S2 finale recap. I watched every episode of the series, but I think I just got lazy because the builds were pretty boring and the season overall was a massive cheese fest. I know it’s probably aimed at kids and it’s family friendly, but it was pretty meh for me.

Okay – let’s start this long awaited (maybe not) review. The finale was an all around family affair featuring three teams of brothers. We had Zack & Wayne, Steven & Mark, and finally Caleb & Jacob. The final build challenge was a 24 hour build tasking the teams to make a day/night build where the build would look different when the lights were off.

The whole episode was literally a family affair as they sprinkled video tributes from the contestants’ families to say “Hi.” They also did a recap of how all the brothers made it to the finale. Half of it was filler and the other half was about the build.

Caleb & Jacob’s The Lands of Time 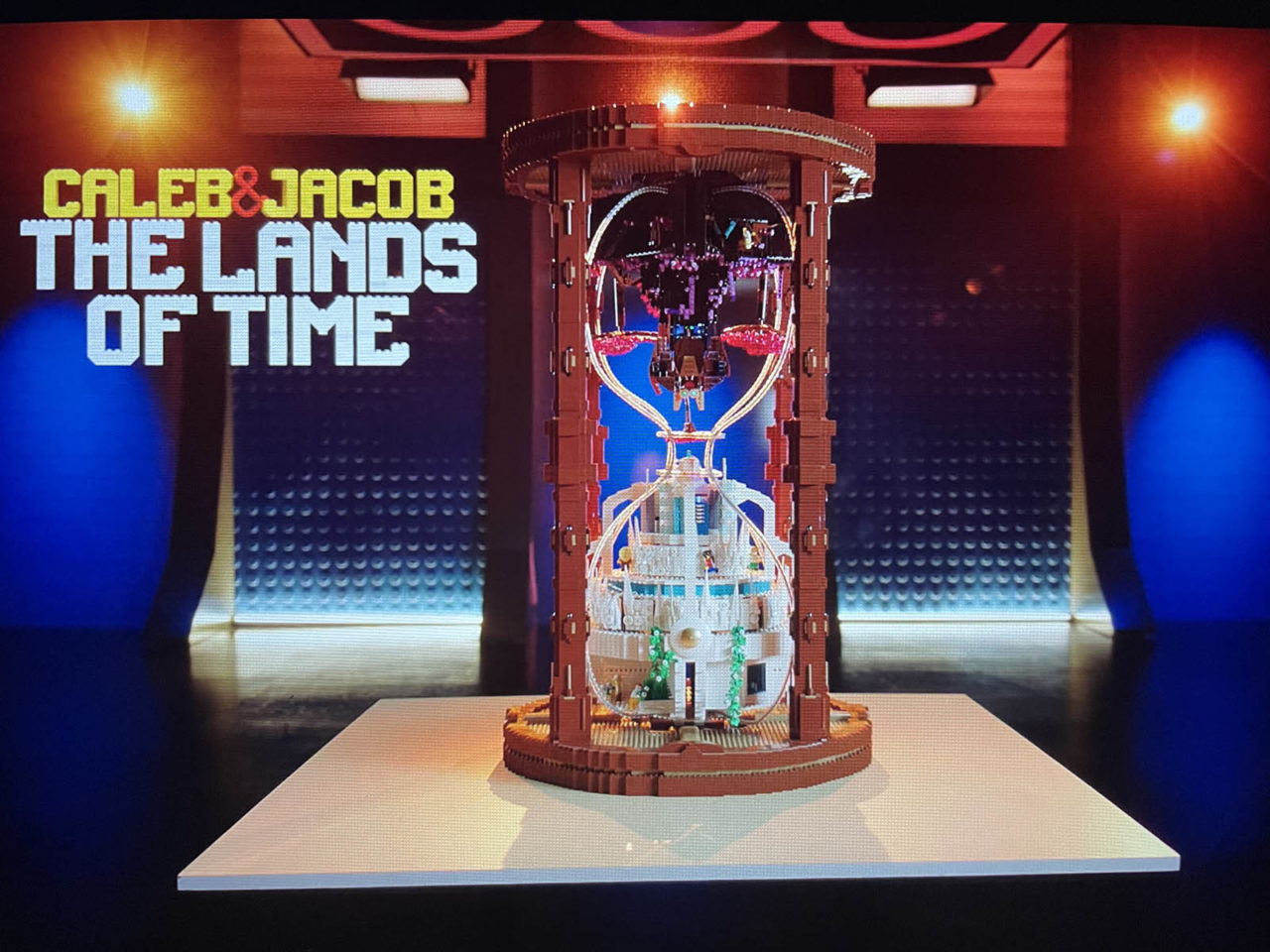 First off C&J decided to build an hourglass called “The Lands of Time” where the bottom half would be the day cycle of a bustling fantasy city and the top half would represent the night with a cave type theme with a giant bat and creatures. The base was split into multiple levels with a couple of the levels rotating around in a circle. The top portion had a giant bat with motorized wings. 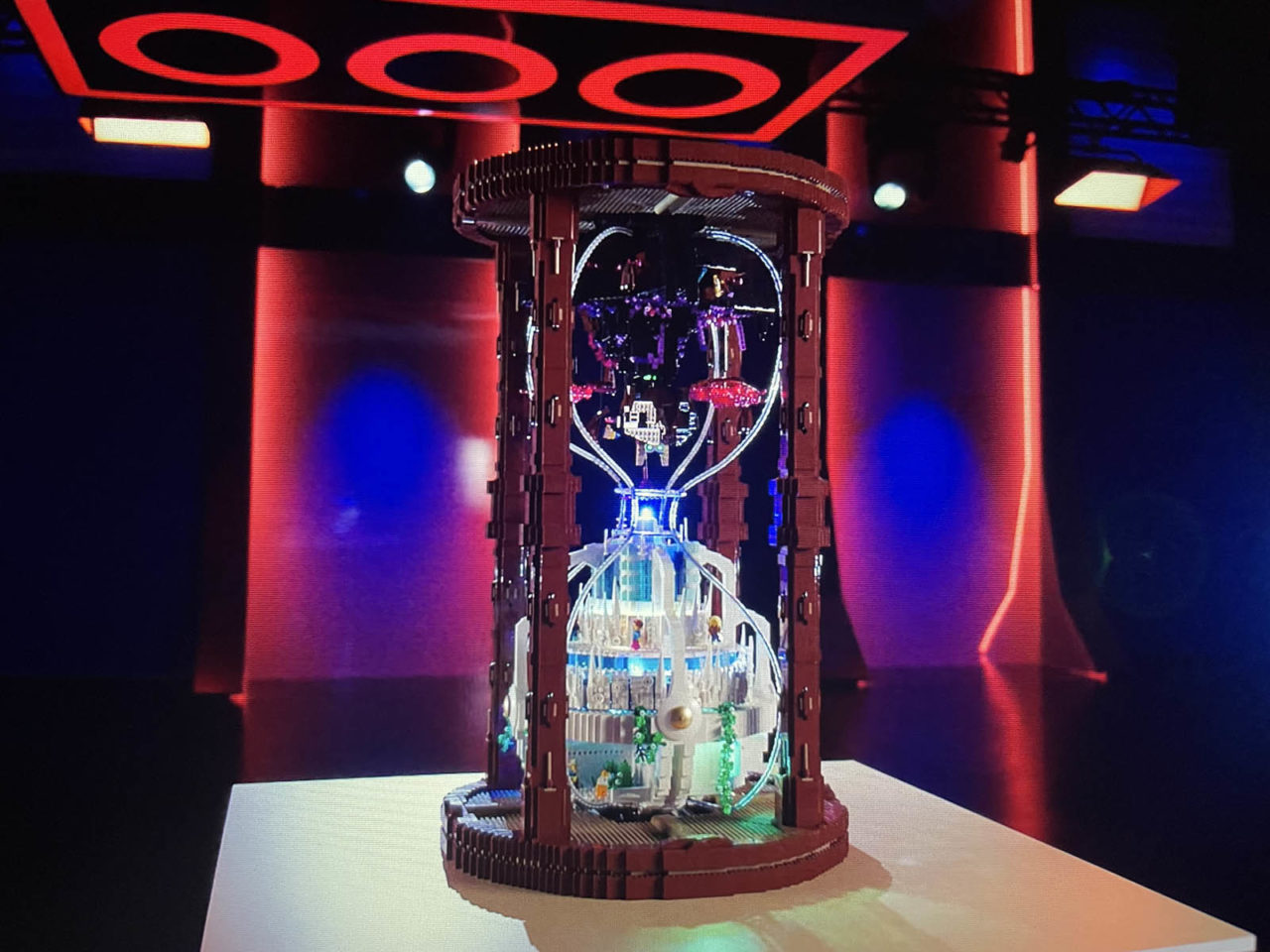 It sounded really ambitious and intriguing and I was really wanting to see this one the most. I was really happy with how the build turned out. It was maybe a little shorter than I had expected, and it did look diminutive compared to the two builds, but it was still an impressive build. Thematically, the concept of an hourglass and the passage of time build fulfills the box next to the “night and day” better than the other two models that they should have won on that idea alone. Their execution of concept-to-build was the best amongst the three. My only other comment would be that I think “The Sands of Time” might have been a slightly better title to go with the hourglass build, but I get why they went with ‘Lands’ instead.

Zack & Wayne’s Pagoda of Our Lives 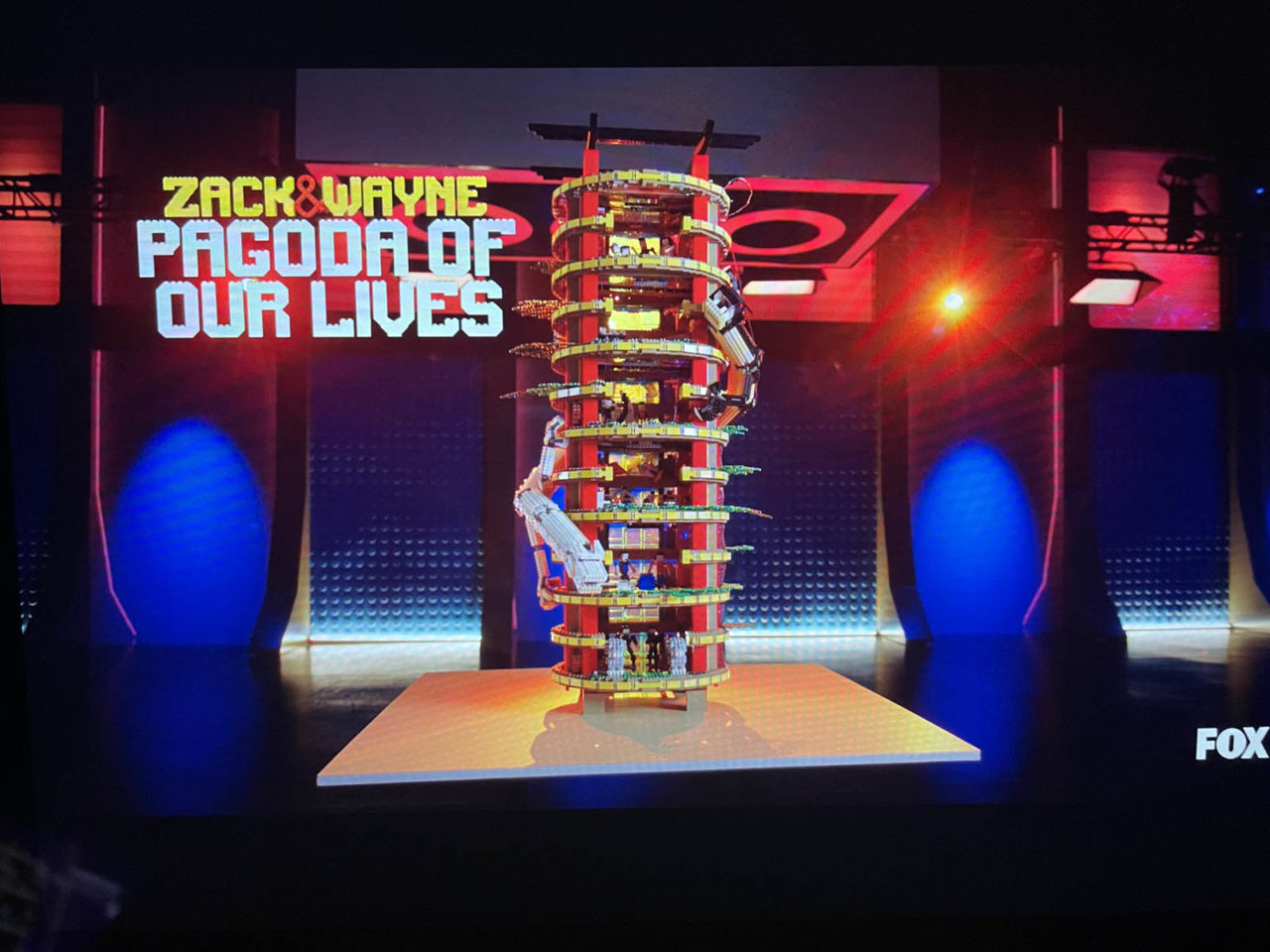 The second team they showcased were Z&W and they were building a “Pagoda of our Lives.” Based on the art concept, it wasn’t that interesting nor was the description, and I’m paraphrasing here: “a giant pagoda like column with two dragons circling it”. I’m not sure what that means and upon rewatching it, I’m still a little confused. It seemed that Zack didn’t entirely believe in their build either with the way he was talking about it. Anyhoo, their build had 6 large levels with a vignette on each level that reflects the brothers lives. Most of the levels had brickbuilt figures while one used minifigures to tell a story. 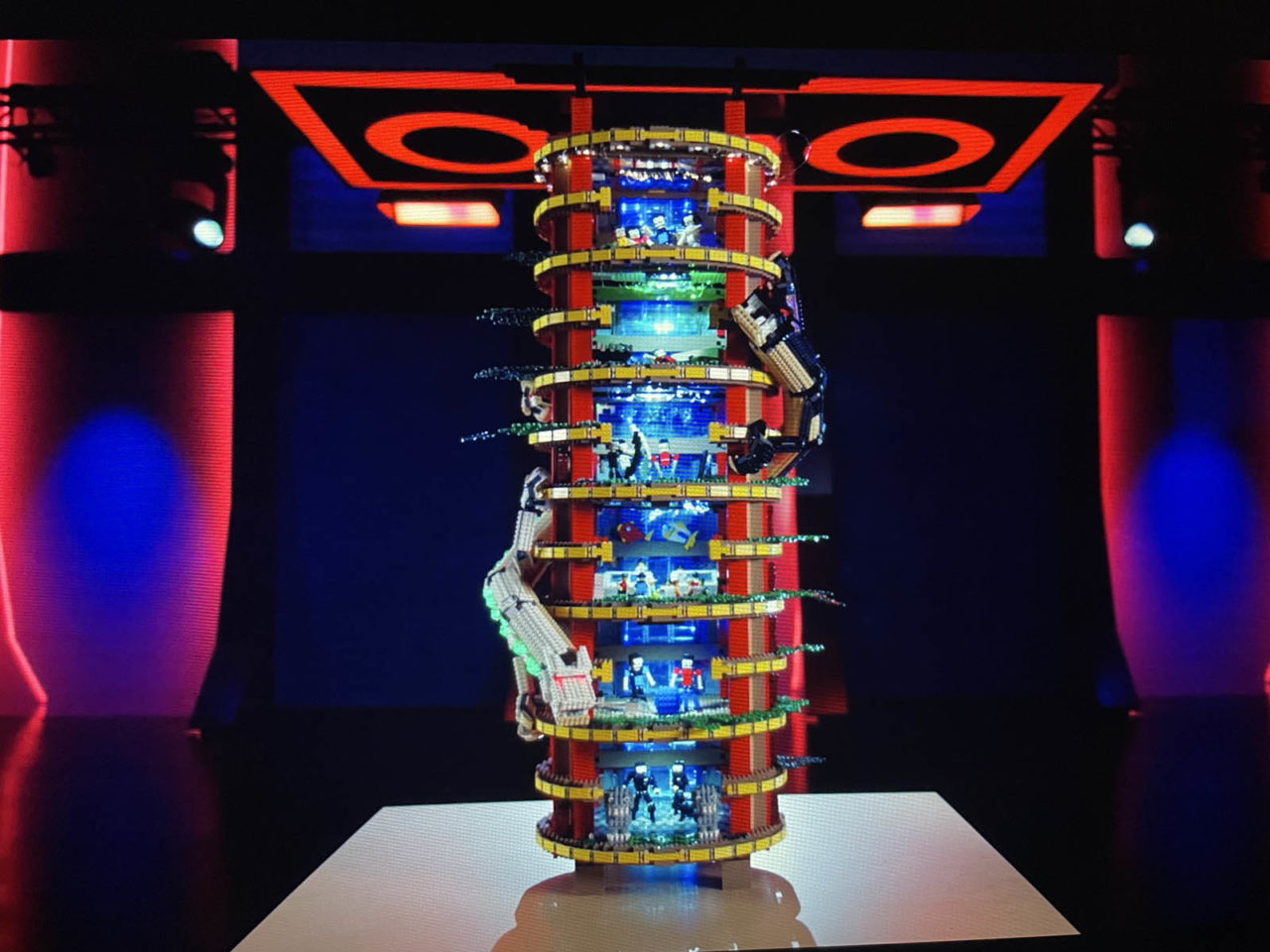 This was the most lackluster build of the three in my opinion. It ended up being less “pagoda with dragons” and more like the Capital Records building during Chinese New Year. Sorry, when you say “dragons circling” something, I imagine them to be flying not crawling. And the night time showed the story of their lives? Really? How does their childhood biographies tie in with the building and the dragons? Thematically there was nothing tying any of this together. Honestly, once this season ends no ones going to remember Z&W, or what was so compelling about their biographies that they felt the need to build it in LEGO form for a competition finale and then broadcast it on national tv. The only people that would find this build even remotely engaging would be Z&W and their family members that don’t mind being around them. The levels were lit up with lights during the night portion and it just allowed people to see the vignettes clearer. As my friend would say, a kid with an endless huge collection of bricks could have built this.

Steven & Mark’ Warden of the Woods 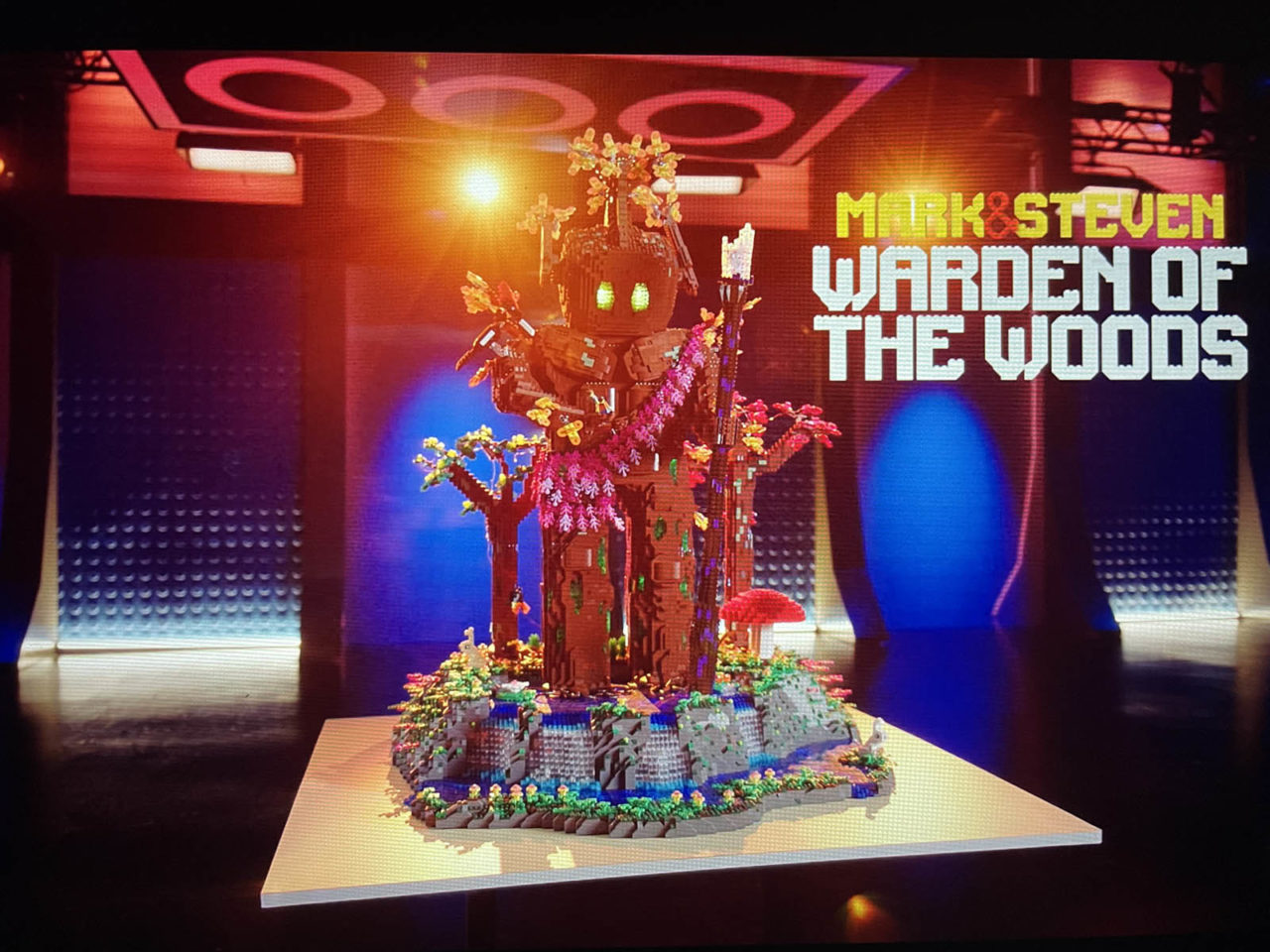 The third and final team of S&M built the “warden of the woods” aka a massive Groot/Ent/Tree Spirit in a forest that’s guarding it/shepherding it during the day. And the night time showed the nocturnal animals standing out. I did crack up a bit seeing the host, Will Arnett, respond with a slightly confused expression saying “that’s nice.” Will is usually at an 11 for this show and this reaction seemed like a true reaction which I thought was great because that’s how I felt when they were describing their build. Upon viewing their final build, I felt exactly how Will commented on their idea “that’s nice” In all honesty, it looks like a giant brick built Groot standing atop a pool of water. There were some motorized tree branches that moved around him, but that was about it. The most impressive part of the build was the lights. It definitely stood out among the three when the lights were off, as they cleverly used the lights in the water and Groot’s eyes. 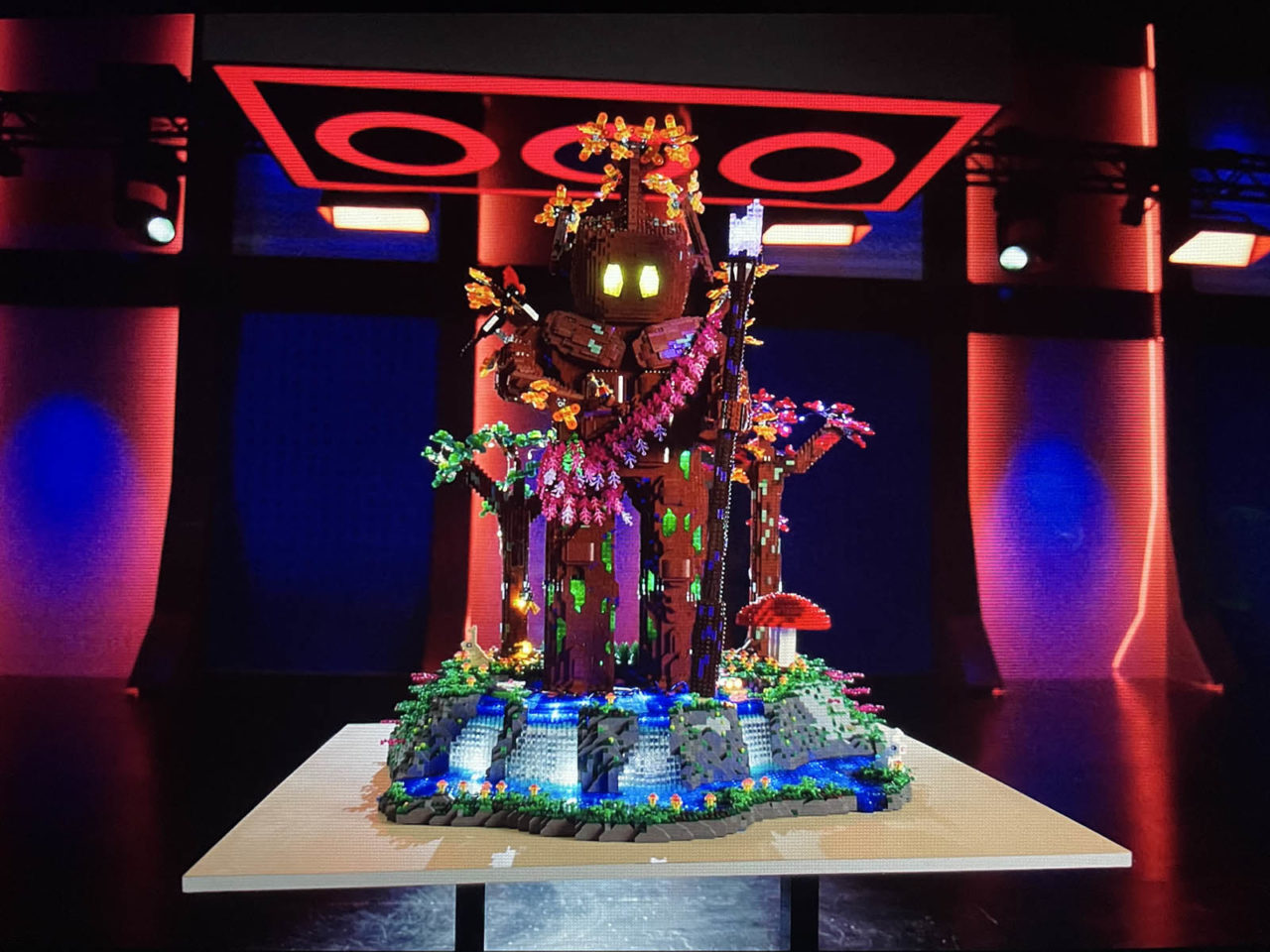 The Judging, Or Lack Thereof

After all three builds were showcased to the judges, it was now time to find out what the judges thought about them and who would be the winner. Just kidding. We had no idea what the judges thought about the builds. There literally wasn’t a single comment on why the judges voted one the winner or why a team finished in third place. This was probably the most infuriating part of the finale. You have three builds that these sets of brothers spent 24 hours on to make their ideas come to life, and Fox or the producers of the show decided to leave out the “judging” part of the builds. I’m not sure why they went this direction as the judges really didn’t get to say much when the builds were fully displayed to them either. You just get to see the judges reaction, or hear them say maybe a sentence or two or hear a couple of “wows”. Then it cuts to the commercial break before they reveal the winner.

After the commercial break, they give third place to C&J with their hourglass with no reasoning as to why they finished third. It was just, congrats and we love the way you build. And then the winner was announced…S&M with Groot wins it all leaving Z&W and their pagoda finishing runner-up.

Personally, I felt that C&J’s hourglass should have won with the Pagoda and Groot builds tying for dead last. I was very surprised to see Z&W’s Pagoda getting runner-up, as I thought they were a clear cut third. S&M’s Groot would have been the runner-up in my opinion as it was just a giant build of a humanoid tree, Groot. The hourglass required a lot of skill and talent to build and it was the most creative and impressive to me. The other two failed in having any specific theme tie everything together and failed check all the boxes for the building challenge.

It really is a shame that we never got to hear the judge’s critiques on why everyone finished where they did. The viewers lost out the most on this because it would have provided valuable insight on why they felt one was better than the other. Isn’t that what judging competitions are about? This isn’t Olympic figureskating or gymnastics, this is more American Idol and America’s Got Talent. This bothered me so much that I had to go back to see if they actually critiqued the final builds from the first season’s finale. And yes – Jamie and Amy actually had comments about each build and it provided the judge’s point of view on them. It makes it more disappointing that this season didn’t show it for the finale at all. It was a meh season, and it finished with a meh ending.

I would have included YouTube clips here instead of photos of my tv, but honestly, I sat through more of these episodes than I cared to and had more than my fill. You can check out all the clips and episodes on Fox’s LEGO Masters YouTube channel to experience the meh for yourself.

Meh the Force be with you.