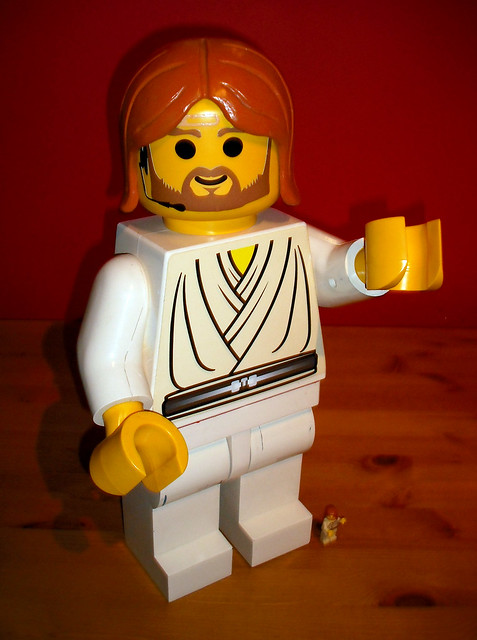 A little while back a plea for help went up in the forums for any info about this large scale minifigure and the facts remain few and far between. It looks like a more detailed print of the Obi-wan figure from 2002’s 7143 Jedi Starfighter set. Aside from that he’s a bit of a mystery, a couple of mysteries really.

Poster Alifbaa has few details himself other than his brother bought it from a shop years ago in the UK and even some of the more seasoned posters on the site have never seen this before. If any one has any info on this big guy drop into the forum and speak up, or drop by Alifbaa’s flickr page if you just want to check out the rest of the pics.

For me the real mystery is the fact that LEGO seems to be missing the boat. These promotional store display maxi-figs are incredibly rare, and I’d bet if I threw down the gauntlet here and asked everyone who had one to post pics in this forum there wouldn’t be too many showing up. Even the basic figures are hard to get, but people must want them because I do (I’m told I am a person) so I can’t be the only one who’d buy. I’d bet they could make a killing selling these figs to kids alone and the vinyl collectable market is wide and varied, there’s bound to be interest beyond the AFOL community. There may be some legal issue holding them back from distributing action figure style large scale figs, but they make the clocks and other accessories which sell so the interest seems to exist on both sides.

There was the Gentle Giant experiment a few years back with the maquettes and as much as I wanted the Boba Fett, I just found them well overpriced for what they were. Non-playable statues which were still on the smallish side. The only one I even had hands on access to was the Luke Skywalker which was a no go for me even when my local TRU marked it down to 75% off. I mean Vader, iconic. Boba Fett, the bomb. Generic looking rebel pilot who happened to pick up a stray lightsaber, pass. Of all the characters they could have chosen, flight suit Luke is just not on my ‘to buy’ list. Tatooine farm boy, yeah. Jabba’s palace Jedi, sure! Just another misfire that leaves me shaking my head. Another missed opportunity.

If you set aside Star Wars, there’s plenty of opportunity to make other big figs from other licences that may not (or definitely don’t) have exclusive action figure contracts elsewhere. The upcoming Superheroes line could be a huge cash cow for LEGO and there are probably plenty of folks who would want a Captain Jack or Harry Freakin Potter! I’d bet you could sell a few of those to the ever hard to crack female demographic. The collectable minifigure line is a great way to see which non-licenced figs could be winners so LEGO could keep a bigger piece of the pie. Go one step further and tweak the figs to fit on standard base plates and proportion the hands, head stud and leg holes to fit the standardized LEGO parts measurements and now you’ve got a winner. A giant, official LEGO, fully compatible figure of your favourite character rampaging through dio’s or just lazily collecting dust with the rest of your priceless geeky chotchkies.

I, for one, will keep my fingers crossed that someday LEGO will give the big fig a real go and on that day I’ll get my giant Boba Fett. What I won’t be doing is holding my breath.