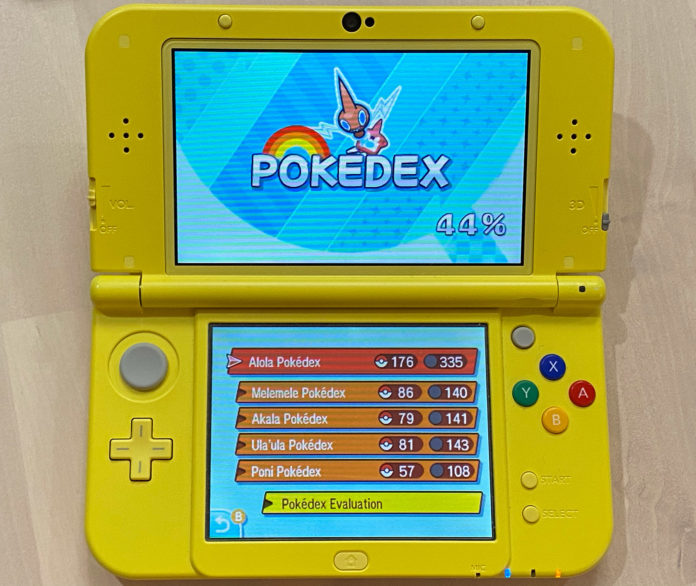 Yeah, I gave up on trying to get a shiny Type: Null. At least for now. I was at 5,200 soft resets combined on both Ultra Sun and Ultra Moon and threw in the towel. It was both anxiousness to start catching Pokémon and boredom of doing the same button presses over and over again. When looking at my plan from a high level, I should be going after the low-hanging fruit first (completing the dex), and then the tasks that are more invovled should follow in order of the amount of time required. I have this habit of jumping right into the hard stuff first and then figuring things out along the way.

It’s how I started Resident Evil 2 Remake; I played that game on Hard difficulty first, which was a huge mistake. Playing the game on the easier levels first netted you items that helped make the harder levels slightly easier to finish. I should have had the same approach with Pokémon: fill out the Alolan Pokédex first, then get the shiny charm, then get a living shiny dex which will help fill out the national dex, and THEN work on getting the legendaries. Easier to harder.

So I gave up and started hunting regular Pokémon. I got 44% done on the Alolan dex which isn’t too bad considering I wasn’t really trying all that hard at first. I only put in a couple of hours of actual trying to hit this mark. I’m still mindful that I have to play through US and UM both again to get a full set of normal and shiny Type: Nulls and Poipoles and as I recently discovered the fossil Pokémon, but I think if I can scratch that itch of catching them all first, sitting through mindless soft resets should be less soul crushing.

Now, having played through all of Ultra Sun, the post-game quest known as Episode RR, where you go and battle Team Rainbow Rocket consisting of all the main bosses from the previous games, really felt like a farewell to the handheld format that I underappreciated so much. The bosses are the same between US and UM, but the legendaries they control are different depending on the version. It was a neat way for me to experience battling them without having to play through the entirety of their respective games. The battles were tough but here’s a hot tip if you’re playing Ultra Sun: use Primarina and level up your team to at least 75 before attempting to beat the bosses.

I’m at 44% and I’m eager to fill out the rest of the dex. I’m looking forward to the SOS battlesÂ  for shiny hunting; the mechanic is pretty enjoyable.