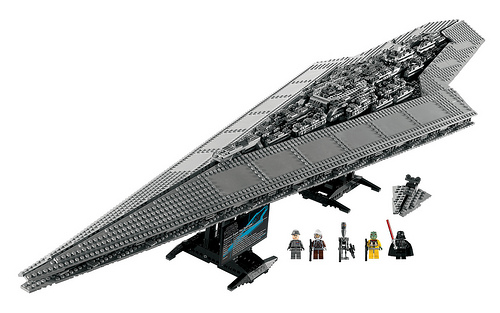 Unveiled at Brickworld in Chicago, LEGO sent out a press release containing assets for their latest LEGO Star Wars model, 10221 Super Star Destroyer Executor. Weighing in at 3,152 pieces, the set goes on sale on September 1, 2011 through LEGO Shop@Home and Brand Retail for a whopping US $399.99. More pictures below, followed by the making of video, followed by the official press release:

Darth Vader gets a LEGOÂ® flagship

The 10221 Super Star Destroyer™ Executor is the latest and longest LEGO Exclusive model to join the LEGO Star Wars™ fleet.

BILLUND, Denmark â€“ One of the largest and most powerful vessels in the Star Wars™ universe has been created as a LEGOÂ® Exclusive model. The Super Star Destroyer™ Executor served as command ship at the Battle of Endor and as the personal flagship of Darth Vader.

It is the first time that the classic dagger-shaped design has been produced as an official LEGO model.

“The thing I was trying to accomplish with this model was to get as close as possible to the original, both with angles and the whole profile of the model from the side,” says LEGO senior designer Kurt Kristiansen.

His biggest challenge with this model was the sheer size. It is the longest Star Wars model made in LEGO bricks, measuring 124.4 centimetres (50 inches). It consists of 3,152 elements and weighs 3.5kg (8 pounds).

“When I was first given this challenge, my first thought was ‘this is going to be a tough one’,” he said. He planned the model by dividing it into separate sections before beginning to build at all.

The build also posed a few problems, though: “When you are developing a model, if you change something at one end of, you have to change it all the way down to make it fit. That’s a challenge on something this big.

“I think Star Wars fans will love this model because it is the first time ever that the Super Star Destroyer has been made as an official model. The thing that makes this model authentic with the movies is the shape, but also the detail on the top. It is like a small city with streets and alleys.”

A section of the top of the model can be removed to show a representation of the command bridge where Darth Vader and the other minifigures can be displayed. The model includes four minifigures: Darth Vader, Admiral Piett, Dengar, Bossk and an extra figure, IG-88.

The Super Star Destroyer is on sale from September 1, 2011 via https://shop.lego.com/ or LEGO Brand Retail Stores. Find your nearest store here: https://stores.lego.com