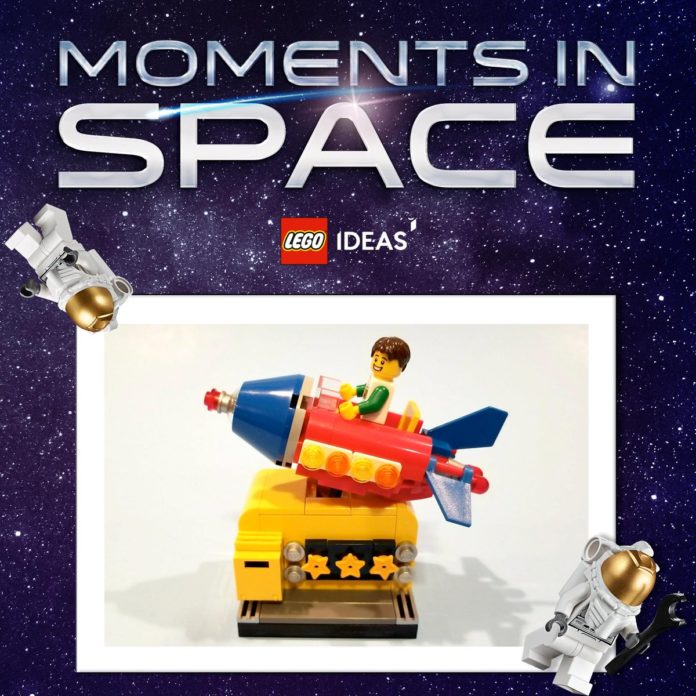 On Friday March 2nd, LEGO tweeted the announcement of the Moments In Space building contest winner. mjsmiley took the grand prize and will see his model be made into a gift with purchase set for sometime in the near future: 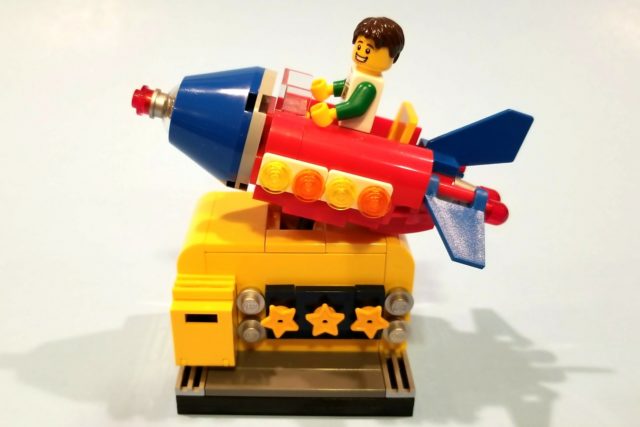 Cute model but here’s where the controversy begins. It looks really similar the exclusive model given to attendess of LEGO’s annual Brand Manager Retail Conference. It’s a conference where all the store managers meet, pow wow, and do managerial things I guess. Here’s a page from the instruction sheet showing what that model looked like:

At first glance, they seem similar enough for even murphquake to call them out on it. Upon closer inspection, they seem to be completely different builds from the ground up. That being said, I’m not sure I’d score it so highly on originality based on the voting criteria. There’s no denying that they are based on the same idea: a coin-operated rocketship that’s placed at the end of a checkout lane to keep the kids occupied while you get your groceries rung up. How many different ways can that be built?

I was all set on giving mjsmiley the benefit of the doubt, but the fact that a dial in the back to make the rocket ship actuate casts serious doubt on the originality of the overall build.

This begs the question of copycat models: how much of the original model has to be changed in a knockoff before it becomes original again? Giving a model a new coat of paint doesn’t really fool anyone. I mean, that’s like sourcing different colored parts for a Snowspeeder, adding a couple of new stabilizers and repackaging it as a new sand-colored Snowspeeder or something. mjsmiley seems to have taken the idea and rebuilt it using new and different parts on the outside. Is that enough to make it an original model? My gut tells me no because I look at the manager’s conference model and the contest winner and my first thought is that they are the same.

It could be that the voting committees, both internally and the “crowd vote” population, had no idea the manager’s conference model even existed. That is certainly a possibility and to mjsmiley’s benefit.

The other possibility is that mjsmiley’s model is in fact, 100% original and just happens to coincidentally share similarities to the manager’s conference model. Even a monkey can type up Shakespeare right?

LEGO probably won’t reverse their decision though, or even acknowledge that this is obviously an issue. So I’ll just go back to my corner and think of more hot air to spew out.

Your LEGO Razor Crest Set Might Not Be Called The Razor...