Back in September, I posted a brief article about how LEGO was seeing a decline in sales and going through a layoff cycle. The holiday season, usually a boon for manufacturers and retailers, has come and gone, and LEGO announced their results for the year. Turns out, that was likely just the tip of the iceberg when it came to some of their problems.

Today, LEGO announced their results for the year, and they saw a 7% decline in revenue. Far worse for any company, however, is that they also saw a 17% drop in profitability along with it, the first LEGO has had since 2004. They commented that a big driver for it was related to “inventory cleanup,” and they gave a peak management-speak answer that “[i]n December, consumer sales grew in seven of our 12 largest markets and we entered 2018 with healthier inventories.” At another point, they mention that the largest markets saw pretty sharp drops (US, UK, rest of Europe are what make up their largest markets), which is likely what drug them down a bit.

I have no special business insight into LEGO, but they call out that they sold more sets to retail partners than they sold and 2016, and they adjusted it to a healthier level in 2017. There seem to be two ways to read that… either LEGO is losing some popularity, or the previous years sales were giving us an inflated number and LEGO had plateaued a few years ago. I suppose, more likely, it could be both; you can only sell so many X-Wings. 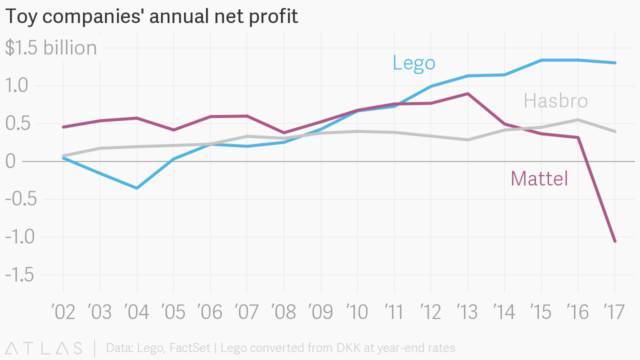 Toy manufacturing, as an industry has been hurting lately. The big three all saw their revenues fall in the past couple of years, and I suppose LEGO and Hasbro both should thank their stars they aren’t Mattel. There are a ton of reasons behind it… kids being more digital than physical, failure of movie properties like the Ninjago Movie or the crash of the Toys-to-Life game market, and the obvious pain that brick-and-mortar retailers are seeing.

There’s some concern in what they call out as good signs, too, at least from the perspective of being a fan of LEGO as a toy. Growth in China, which is great… but is also being driven by non-toy stuff like digital games and a social network that launched there. If it was around toy growth I’d be all in for the good news, but the more LEGO sees its money come from non-toy sources, the less effort we will see go into that. And a lack of effort and innovation is what, in my opinion, has been one of their biggest problems lately.

There are no quick and easy fixes for this, and LEGO is probably in a better place than some others, given that they aren’t publicly traded and have to contend themselves to just making a billion dollars… but continued changes in the retail market affect them, and eventually someone is going to have to mix things up for stuff to change. They also have plenty of money on hand, and they do have room to expand. Of course, the bad news, based on the outlook for retailers and their competition, is that this will probably get worse before it starts getting better.

Your LEGO Razor Crest Set Might Not Be Called The Razor...