I typically upload pictures before I start writing, and usually need to put some filler text in to keep our blog software from going all… well, WordPress-y. Usually it’s just something like “placeholder” or “something.” For some reason, when I started to write this, I was humming “Everybody was Kung Fu Fighting.” Maybe I just needed a little disco in my day after the Imperial Battle Pack review.Â This has nothing at all to do with the review for this set… it’s just hard to come up with intros after a couple hundred reviews.

Of all the battle packs to come out this year, I was most excited to review 75133 Rebel Alliance Battle Pack. My love of Rodians (and Ewoks, but that’s unrelated) is well documented. I mean, as much as I hate on the PT, I own multiples of all of the Rodians from those movies. I also like the irregular nature of Rebel forces,Â and that means it makes a lot more sense to have different looking troops and uniforms.

The big draw, outside the jetpacks (which in gray are just nicer overall that the Imperial White ones), is that we get two different aliens in this set, the Rodian as well as a Duros trooper (Cad Bane was the only Duros figure we’d gotten previously, I believe), to go along with our two generic trooper heads. The speeder bike is an evolution of the Endor bike, though much like the turret in the Galactic Empire Battle Pack, I do not recall this being in the game itself that these are based on. There are bikes, but they’re the normal type we saw in Jedi. Still, for $13 and 101 pieces, both standard for a battle pack, there seems to be a lot to like about this set at first glance.

Should I just get the critique out of the way right now? This pack has the same gap that the Galactic Empire does in gender and person of color representation, which are both in the game (and in the modern canon and comics). Yes, I’m going to keep banging that drum until it gets better, but let me also be clear about one thing: it has gotten better this year. All of the city $10 packs included a female character, the TFA First Order pack had a person of color, and we are getting several sets that represent the cast makeup so much better (like in the Civil War sets).

But better does not mean good enough. Star Wars and LEGO can both be better. We’re seeing change, and that’s cool, but I want this hobby to be approachable to as many people and fans as it can be. I want it to reflect what we see, and in a lot of ways, real life (because all Sci-Fi is ultimately about real life), so there’s still a long way to go. But I also promise I won’t beat that dead horse for the rest of the review. I make no promises at all about the next review.

The minifig lineup is split between two regular troopers and two troops with jetpacks. The pack is basically mix-and-match, as there are also only two torso and leg variations, we just get a little bit of swapping to differentiate them. 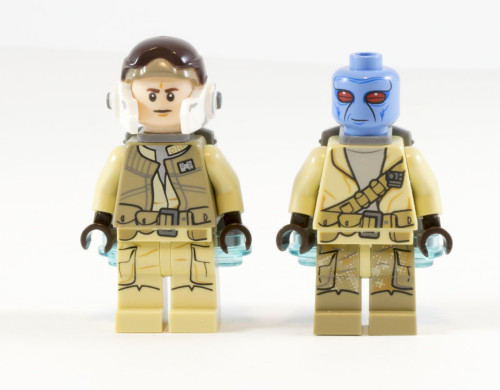 If you follow the instructions, our Duros buddy and captain “sadly born with a chin butt on his forehead” end up with the jetpacks. While they are a cool way to travel, they strike me as wildly impractical. I mean, you’re basically presenting all those Stormtroopers with a nicely elevated target. I mean, armor is strictly “for looks” in the Star Wars universe, but really, these guys might as well hang a bullseye on those uniforms. 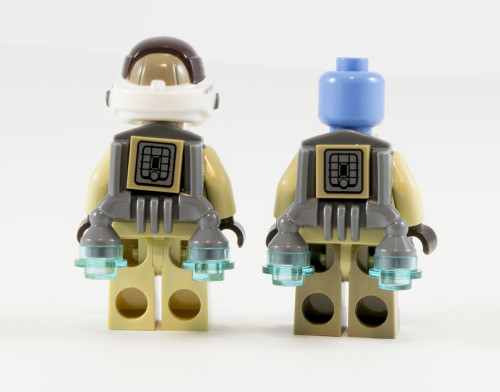 The printed tile is darker, as is the pack, and in gneeral, I just like the look of these guys a lot more than the Stormtrooper versions. The packs really got lost on the white armor with them, which is great for the situation where they are on Hoth and Snowtroopers aren’t available, or it’s an exceptionally cloudy day, but they looked kind of boring. We also get a new version of a pilot’s helmet for one of the troops, which is probably the coolest part of the set. When I end up getting more of these (did I just tip my hand on the final score?) it’s probably because I want to outfit my deck crews with gear like that. 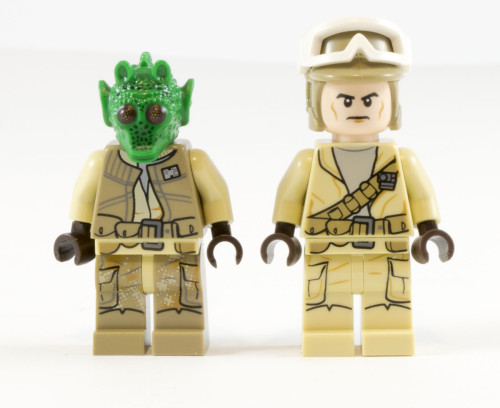 Our regular troopers are a bit more coordinated with their outfits. Apparently Rodians know how to pick separates, which is always a useful skill when trying to die from getting shot in the back shortly after arriving on the planet. Probably from friendly-fire, if Han Solo just spawned. He always shoots a Rodian, just to be safe. The gap on the printing is a bit jarring, but honestly, there isn’t a great solution to that yet. Still, I like the overall look of the torsos and the pants… it’s just a bit of shame that they’re all basically stuck together now. Still, nice that you can swap the legs around for a little bit of color difference. 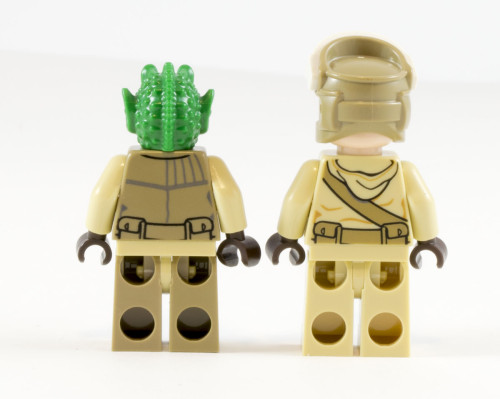 For those keeping score, the Rebel helmet is in a new color (dark tan). Previously, we’ve just seen it in white (Hoth) and light tan (other Rebels), so it’s always nice to get a little variety. Looking at the back, he also has a printed hood on the back, and I sort of wish they’d start providing those hoods as the neck part we’ve seen in a few other figures (Wyldstyle and Green Arrow come to mind). I’d love to start getting more of those type of accessory parts for figures, especially if they’re going to include them in the overall look. 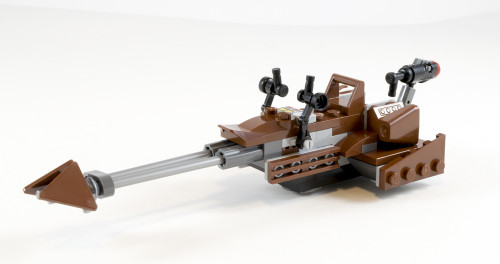 The speederbike is actually fairly interesting. There’s certainly an established aesthetic that it’s going for, which is a little bit weird, given that those bikes were Imperial bikes in Jedi that the Rebels stole. I guess that particular company wasn’t afraid of selling to both sides, or the Rebels just stole a whole bunch of these things.

It’s kind of funny to see a simple addition, like that rear facing seat and gun that would haveÂ vastly improved what our plucky rebels were capable of when landing on the Forest Moon of Endor. It seems like being able to shoot at anyone following you is quite a bit more useful than having to steer your explosive bike through tens of thousands of trees that you are recklessly weaving through at absurd speeds.

Probably the nicest thing about this little build is that they made sure the troops that end up on it have a place to but their blasters. Unlike the Empire pack, which I questioned the usefulness of the cannon, this is something I could put on the shelf for display or drop into a battle scene. Sure, in spots, it’s kind of basic, but it still just seems like more fun than that ugly gun.

There are some useful parts tucked in here, though I’ll admit not as many as on the Empire pack. The engines in brown, always nice to get the triangle flags, and 2×1 brown round slopes are all good things to have.

What this pack does well that the Empire one didn’t isÂ make buying more of them attractive. Sure, you’re going to end up with a lot of Rodians and Duros that way, but there are plenty of uses for those heads outside these troops. There are a couple of combinations for the patterns on the troops as well, andÂ these guys can fit into a couple of different applications. The somewhat generic nature of the troops also makes them easy to drop into either Rebel Alliance or Resistance armies as well (especially since the sourcebooks made it clear that the Resistance was reusing a lot of the Rebellions equipment). That makes this pack a pretty solid five out of five, and one that’s worth at least one, and likely more, purchases.

Verdict: 5 out of 5. This is a great battle pack and a solid army builder. You can pick it up right now on Amazon.com.