Black Panther wasn’t really big in theÂ general arc of my comic fandom. I was a kid of the 80s and 90s, and I don’t even remember him showing up in the stuff I read (which, like everything in that era, used a lot of Xs and was Xtremely Xcessively Xtreme). When I got back into comics seriously a few years ago, I had missed the best of his stories, like his marriage to Storm from the X-Men and the whole “at war with everyone all the time” that seemed to go with the character.

Of course, in the past few years, the character has risen to prominence again, and been at the center of all the big events (Illuminati, Secret Wars, etc), so it was pretty great to hear he was showing up in the movies. I’m curious how they’re going to handle him, and Wakanda, in the upcoming movie. The character was one that always worked according to his own agenda and sense of honor, and it could look like a good guy or a bad guy from the outside. Sometimes, he’s both.

I’m excited enough for the movie that I jumped at the chance to get all of these sets, and start the reviews with 76047 Black Panther Pursuit. It seems to have all the requisites of a Marvel Super Heroes set at this point… Captain America and/or Iron Man, a motorcycle, and a jet of some sort. At $29.99, this is the mid-point set (though much lower than the middle for LEGO’s range), and it weighs in at 287 parts and three minifigs. It seems like a pretty solid set at first glance, so here’s hoping that it holds up.

Black Panther has had increasing importance in the Marvel Comics in recent years, though he’s been mostly quiet since the end of the Secret Wars event.Â He’s part of the Ultimates, but that series is weird even by Marvel standards. The real highlight, outside of the appearance in the upcoming movie, is the new solo title that comes out in April, written by Ta’nehisi Coates, an incredible author for the Atlantic and an absolute super-nerd. I’m very excited about that series, as I’ve been a fan of Coates’ writing for years now.

My first thought when I saw this minifigure lineup was “wow, that will make the resellers kind of mad.” We get a mask-less Captain America, which has only appeared in the $350 Helicarrier set, Black Panther, who’s unique to this set, and Winter Soldier, who has only been in a polybag. Cap has a couple of differences (hair and face), Winter Soldier gets a new torso (though apparently Sebastian Stan has be recast by Chris Pratt). 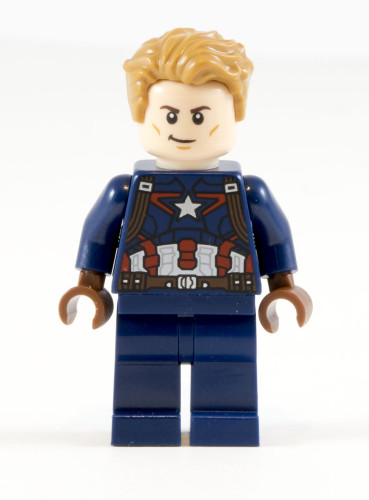 While I own a Helicarrier, I’m glad to see no-mask cap make it into a cheap set. Cap spends probably half his time in the movies without the helmet. I mean, you don’t pay Chris Evans just for his sunny personality and abs that are so firm that it caused HayleyÂ Atwell to improve aÂ certain reaction. The torso is the same version we’ve gotten with the other movie Caps for some time. What’s new here is the hair and head. 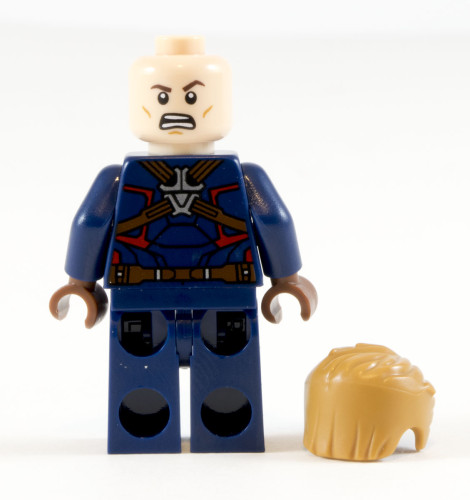 You know, even when Captain America is angry in the movies, he still looks fairly happy and laid back.Â I’m curious what in Civil War ticked him off so much. My money that he finally found out that the Dodgers moved to Los Angeles. 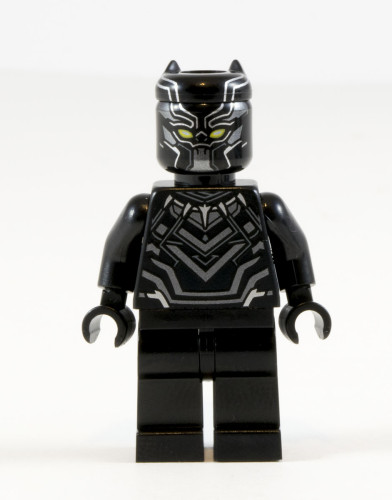 This is a situation where the movie including this character is probably the only reason we ever got a minifigure. Black Panther is a cool character, but his costume has always been fairly boring. At its best, it’s just a black bodysuit with the signature mask (as well as the necklace, typically). Here, we get some nice armor, likely Vibranium, and that gives some distinction. 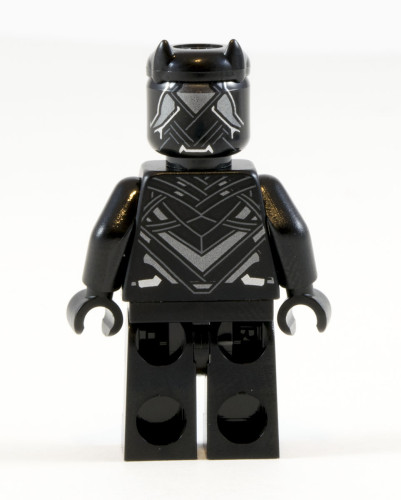 In the comics, Black Panther is almost borderline Mary Sue-esque… rules a country, incredibly smart, marries a goddess (though it was annulled later), and is generally un-killable. He’s kind of like Doctor Doom, except far more justified in the ego. So I am kind of curious how he’s going to work in the movie, and will enjoy seeing what comes with his solo movie in a couple of years. I also kind of hope this is a Kylo Ren-esque figure, where we’ll get a version with a standard head later. 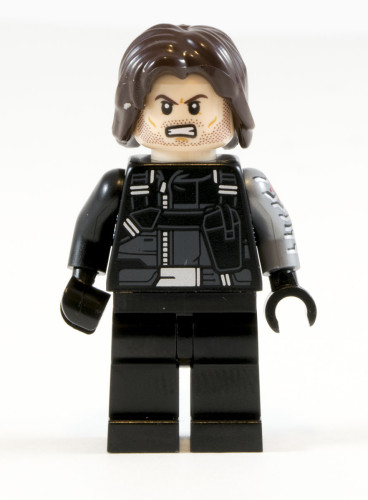 I’d like to say I’m upset that all the Winter Soldier polybags I have are now worth less (all bought the honest way in-store), but I don’t tend to buy stuff to resell. I buy them to trade later, and it’ll still be good for that. This guy is a pretty decent upgrade, with printing on the arm, more detail on the torso… but now a lack of leg printing and a re-used head. 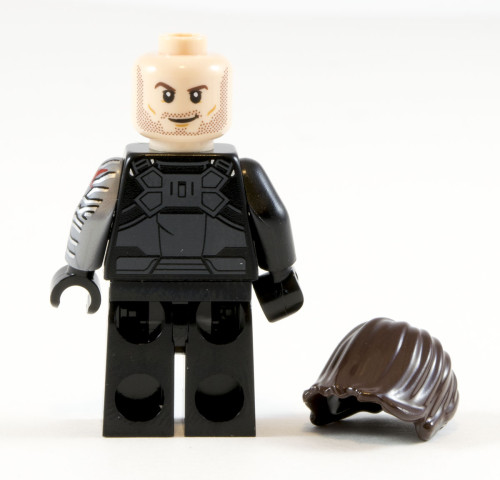 I am sort of curious how the whole Winter Soldier thing is going to play out in Civil War, and why Bucky thought it was a good idea to maintain the exact look and similar outfit that he had when he was a HYDRA asset. You know, given that he’s most likely a highly-wanted person of interest (at best), and considered a terrorist and assassin (at worst). Still, a decent upgrade, though I’m thinking I want to mix this torso with the legs and head on the other one. 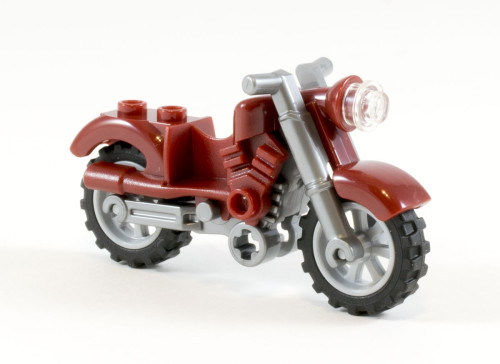 If LEGO really wanted to stick it to aftermarket resellers, they would have introduced this bike in Â light gray, like we got with the Wolverine Chopper in the initial release. That remains the only set that particular color came with… while the dark red was recently in the Captain America / Red Skull set. Still, I like seeing a bike like this over the crotch rockets we normally get. 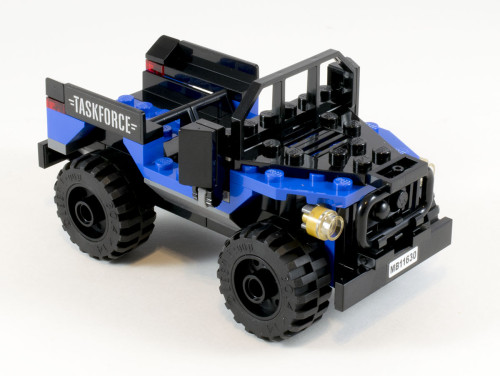 Our Avengers buddies are driving a Taskforce truck, here, which seems to indicate that this actions in this set happen before Steve and Tony have their little throw-down. Given that the trailer shows Black Panther attacking Winter Soldier, that sort of makes sense. The other option would be that the LEGO set is based on a few basic concept art stills, and has nothing to do with the movie. 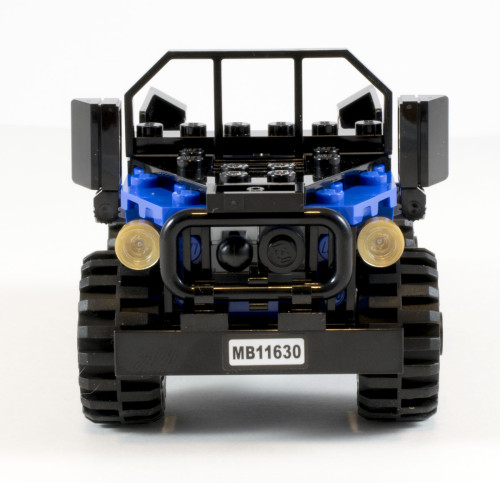 I think I’m just at truck and jet fatigue, however, given that I think this is the thirty-seventh one I’ve reviewed this year or something. I’m sure I’ll make the same comment in a few paragraphs related to jet fatigue as well. It’s kind of a shame that the high-water mark for Marvel jeep sets was the very first set we got in the line. 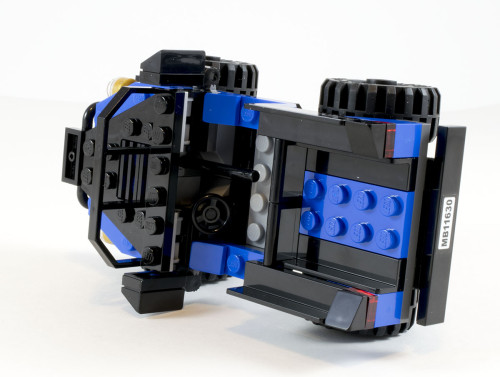 Not to say there aren’t a few cool bits to this jeep, like the stickers for Taskforce and the license plate, and the way that the flick-fire missile is integrated into the engine compartment. Of course, the downside to that is it makes the interior of the jeep touchy, even with a minifig. And I like the idea of the more pane-oriented windscreen, but this is just a grate, and the lack of “glass” in it looks weird. 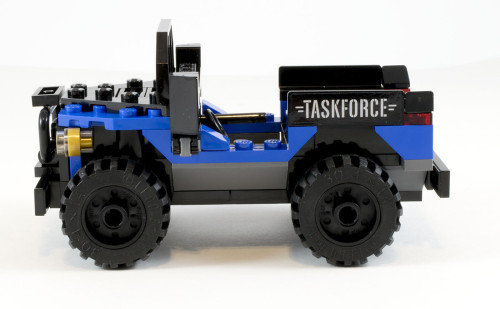 Otherwise, this is a fairly basic setup. I like getting the little air-hockey paddle part in gold (I think they’re called headlights, but I’ve been wanting to make a little air hockey table since I got my first one), and I like the front grill… but otherwise, there’s not much here, and not enough that makes me want to try and mod it into something else. 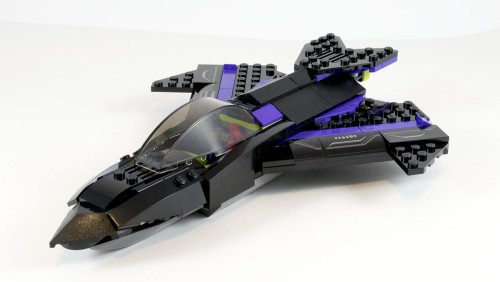 Please feel free to make up your own witty comment to put here about all the jets we’ve had in sets lately. Something with a pun would be ideal. Okay, to be fair, this jet is a whole lot more interesting than the truck. We get some nice slopes, some purple tiles (always welcome), and that nifty new (at least to me) nose piece at the front.

I think the problem I have with the jet, while it is swooshable and pretty sleek, is that it feels just sort of unfinished. I don’t think we saw this jet in the trailer, but it wouldn’t shock me if Black Panther brought his own jet (or, if Bucky stole something, brought his whole army on to American Soil to get it back). That makes it hard to say how accurate it is… but I don’t think T’challa would be rolling with lime green engines. 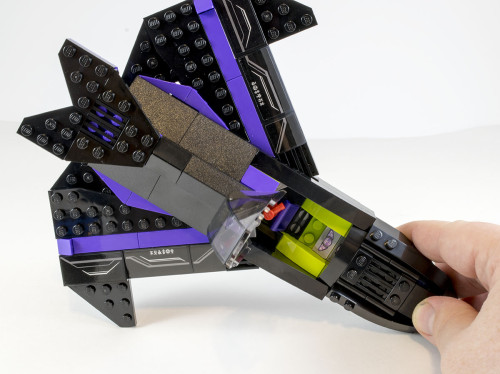 The jet also ends up kind of fragile in a few parts, especially on the curved slopes on the side near the nose. I’m also curious when jets went to the Star Trek shuttle style of cockpit (Delta Flyer not withstanding), and opted just for a straight control panel. Again, we get some light green, and the other thing that’s in all of the Marvel sets… a fire extinguisher.

Honestly, I struggled with the rating of this set more than most. I like the minifig lineup, though it’s hurt by Captain America being… the same guy we’ve gotten like ten of, and Winter Soldier also appearing the the $80 Airport battle set. Black Panther is a highlight in the set, but the rest of the set is fairly mundane, and like so many other Super Heroes sets we’ve gotten recently. Ultimately, I settled on a three out of five, though to be honest, you won’t feel terrible paying the full price. This set is just far more solid if you get it on sale. However, if you don’t have the Helicarrier, and don’t want the airport set (and why wouldn’t you want that set?), this is probably a higher value than that. But, given the rest of what’s available, this set just doesn’t do enough to set itself apart.

Verdict: 3 out of 5. Probably a four if you don’t have a Helicarrier or the old Winter Soldier. You can pick up 76047 Black Panther Pursuit, and the rest of the Civil War sets, right now on Amazon.com. 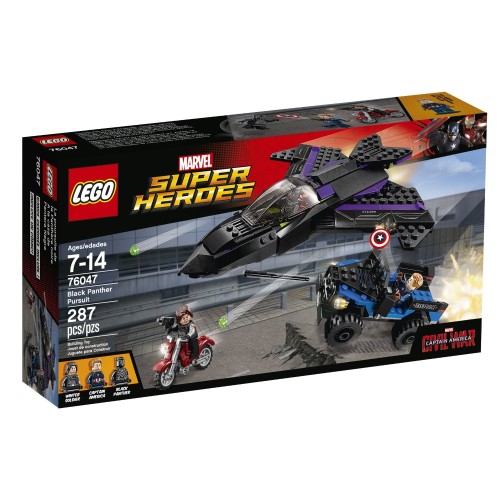