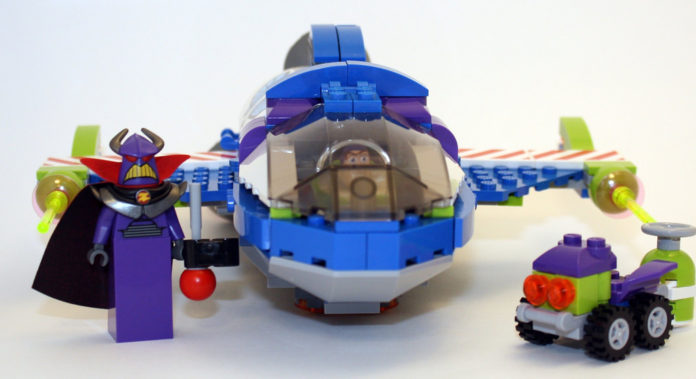 This was among the hardest of the Toy story sets to review, mostly because it was the least iconic of the first wave, and, as I initially thought, the least interesting. It was designed on something never seen in this form in the first two moviesâ€¦ Buzzâ€™s starship was the box the original Buzz Lightyear came in.

So, hitting a level of obscure that only Star Wars fans have touched (see the whole T-19 Skyhopper for an example), we have a whole set based on a box. 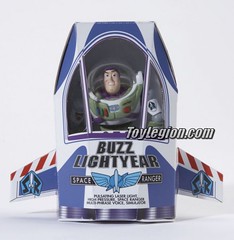 As a ship, I suppose itâ€™s passable. The biggest problem, as I alluded to in my 7590 Buzz and Woody to the Rescue review, is that Buzzâ€™s wings can only be installed in one position, out. You can take them off (which would be accurate in the some circumstances, go watch the movie), and make him considerably smaller, but thatâ€™s not how the ship is built. 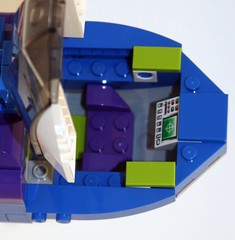 Instead, that design makes it so the entire ship is just too wide, making it look clunky and over-sized. Perhaps that what they were going for, I guess, since that would match the box, but it doesnâ€™t seem to work. Instead of something sleek and â€œspace toyâ€ we get something plain and clunky. And it’s even a bit worse, the cockpit has some of the worst gaps I’ve ever seen in a ship. I usually don’t even mind them on most of the ships, it’s just s necessity of building with LEGO to accept that the nature of brick building means the occasional gap. But here, we have big gap, two of them, really, and when you look at the side of the ship, it just looks terrible. 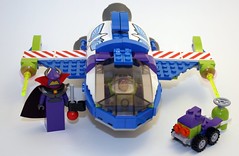 Accuracy is one of the hardest things to measure in this set. We really never see the ship in anything other than box form in the movies (I have no idea if it shows up in video games or the TV series), but even based on that brief view, and the toys it inspired, the ship doesnâ€™t look quite right. First, the wings are just too big by comparison. On the box, theyâ€™re really just tiny little extensions with the stripes up front and some logos on the back. Thatâ€™s backwards on the LEGO build, and the stripes donâ€™t contour with the wing. 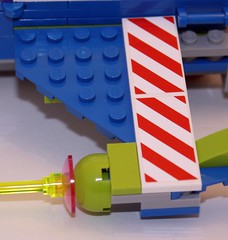 This set also diverges from the rest of the line (save Woodyâ€™s Roundup!) in using stickers instead of printed bricks. In playsetâ€™s, I really have no problem with stickers, theyâ€™re obvious ways to cut costs and give me more bricks. But here, they seem to hurt the set. We got printed parts with RC, why not here, where the assumed â€œswooshâ€ of a ship will take juts as much wear. It gets worse in the stickers being split apart across multiple bricks, Itâ€™s a pain to line them up just right, even worse for kids, and get the ship to look right. On a side-note, however, the wing plates are the delicious new 2×4 variety that I want to just get a pallet of for builds. I love that the newer sets have finally started to extend out the plate sizes (with 2×3, 2×4, and 1×3 all joining the mix this year), but I donâ€™t like those same bricks being used for a sub-par look.

The set also includes a little scooter that pops out of the section that opens in the back. It would almost make the bulk of the set worthwhile if it wasnâ€™t just such a ho-hum addition. Iâ€™m not sure if itâ€™s for Buzz, or for Zurg, or what, but it seems odd that a flying spaceman would need a scooter, or that an emperor would flit around on some glorified Vespa. 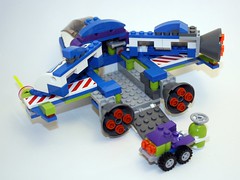 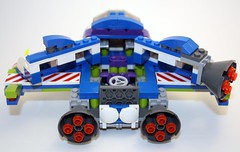 Speaking of the back of the ship, the engines are probably the things that bug me the most. Theyâ€™re just so basic and simple that they do a disservice to the entire build. Simple cones, four bright orange stud bricks, and thatâ€™s it. I wasnâ€™t expecting magic with these, but I would have wanted something that looked more like an engine. Probably one of the first things that should be modded on this ship, but Iâ€™m just not sure I care enough about it to undertake the effort. 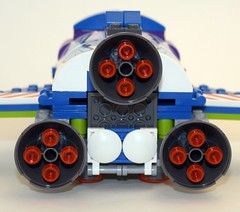 Of course, even some of the worst sets ever created have some redeeming factors, and this one is no different. Itâ€™s the only set that features Emperor Zurg, and that alone is pretty cool. Heâ€™s a sharp figure with custom capes, shoulder pads, and a brick-built weapon. Heâ€™s a great example of why the characters as rendered in LEGO make the entire Toy Story line. Buzz appears in his second set, as well. You can read my review and opinions of him in the 7590 Buzz and Woody to the Rescue set. Much like LEGO Indy, you just canâ€™t have too many Buzz figures!

The entire set seems like it could have been so much more than it was. It’s serviceable, I guess, and certainly swoosh-able, but nothing special. It’s not a bad buy, certainly, and a decent price-per-part ratio for a licensed set.