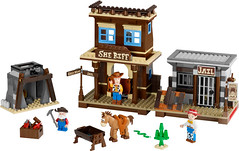 Our first big playset in the Toy Story line, and the most expensive set thus far, is the one that fits into that same little niche as Buzzâ€™s Starship. It wasnâ€™t seen all that long, mostly as outlines, cartoons, and of course, the â€œshowâ€ featured in Toy Story 2. It was also a feature of Disneyland for awhile, with some amazingly creepy looking representations of the Roundup gang (Jesse just makes me shudder… go Google it, sorry about the nightmares that will follow).

This set, however, gets a lot right in building a LEGO style into something without a whole lot of screen time. Itâ€™s a classic playset, much like the Indy Line and the recently released Prince of Persia sets have given us. Itâ€™s not to be swooshed, itâ€™s about recreating the magic of Toy Story. And it does this well! It has the campish wild west feel that Woody was based on, and the LEGO feel to it as well. 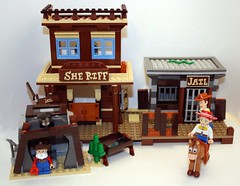 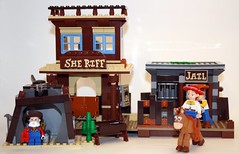 The set consists of two buildings that connect together, a small mine opening, and a few different small accents. The buildings aren’t stellar, but they do work and have some really sharp additions. The roofs of either building are somewhat boring and plain, but they’re easily mod-able. There are some really great parts sitting in these buildings as well, like the saloon doors, and these absolutely beautiful light blue windows (I <3 that blue color). The safe on the top floor of the sheriff’s office is excellent, even if the rest of the interior is pretty simple. 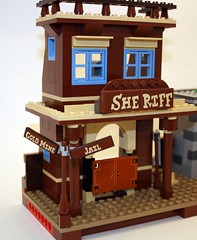 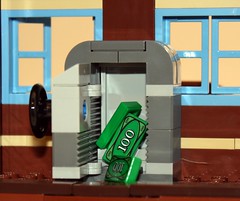 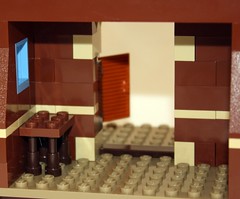 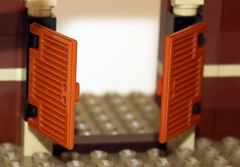 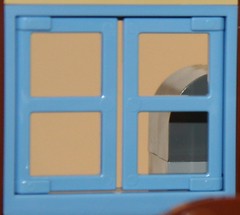 The jail is in a similar boat as the sheriff’s office, simple and functional. It’s got a few playset options, like a removable back wall and a little wheel on the side to hold it. The roof of this one bugs me more than the Sheriff’s office, since it’s just a plain plate with a panel liner. It seems like you could have done something to make it look a little more… prison-like. I’m not sure what that is, but I bet it could be done. There’s less detail to this section of the playset, and both this and the sheriff’s office are connected by a plate and a little catapult type connector. 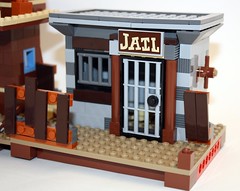 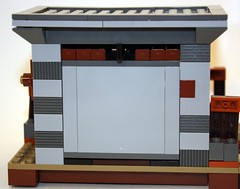 The accents all fit the motif, even if there’s nothing special about them. The mine uses a couple of BURPs and is simple. The cactus is really cool and I’m sure will show up in other builds. The most interesting of the accents is the trough, with a use of 1×1 studs as water and a brown cylinder that I wish was available in a cheaper set so I could put it into some Steampunk builds. Love me some brown cylinders to turn into boilers! All-in-all, they’re all functional, but nothing spectacular to them. And of course, more mini-fig tools, because when in doubt, dynamite!

Of course, like 7593 Buzz’s Star Command Spaceship, this set uses stickers. I’m usually more forgiving of stickers in a playset, since they don’t take as much wear as in a ship. They’re also more like accents than main components of the set: signs above the buildings, the wanted sticker, street signs… not wing accents that could be used anywhere. Plus side is we get some more tiles, this time in brown, which is always nice if you don’t apply the stickers. 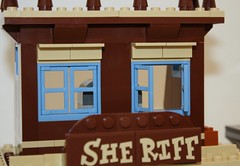 Minifigs is of course, where the Toy Story line really shines, and this set is no different. Woody appears in another set, and we add the rest of the Roundup Gang: Jessie, Stinky Pete, and Bullseye are all there, and they look amazing. Jessie gives us another set of long legs, the face is just perfect, and even the yarn hair looks good. She doesn’t have the pull-string printed on the back, but I don’t remember it being featured in the movie either. Bullseye is just spot-on as well, though his hollow legs make it look better from the front than the back. Stinky Pete has some nice little stubby legs, a you can almost feel him talking just like Frasier. 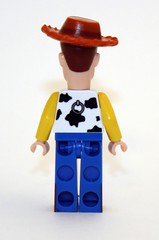 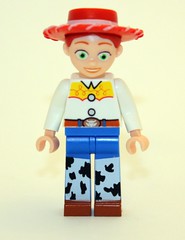 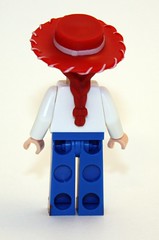 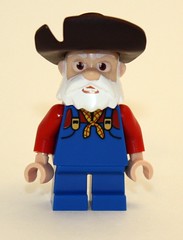 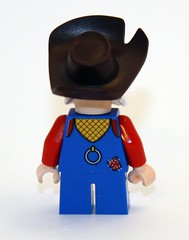 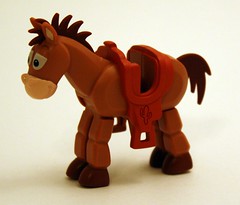 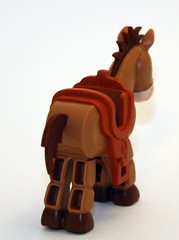 All in all, I enjoyed this set. It was decently fun to build, it came with really nice minifigs, and it is certainly playable. That’s good enough for me… this time…