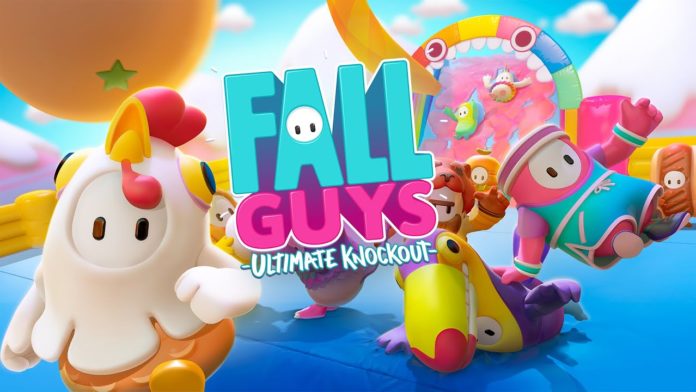 I declared before that Tetris 99 is the best Battle Royale game out there and I still stand by that claim, but Fall Guys: Ultimate Knockout comes in a pretty close second. As part of PlayStation Plus free downloads for August, there was no risk for me to give it a shot so I looked up some stuff on Twitter and YouTube to see what it was all about. And what I saw looked like a whole lot of fun. And it is!

You play as a little bean-shaped avatar and the goal is to be the last man standing through a series of mini games styled after obstacle course TV game shows like Takeshi’s Castle or Wipeout. Each game is considered an episode with several rounds of mini-games that whittle the field down smaller and smaller. The controls are as simple as can be: there’s a button for jump, one for dive, and another for grab; you use the left stick for movement and the right for the camera; and finally the D-pad is used for gestures and that’s it. Pretty much anyone can pick up and play and in that regard it’s very welcoming.

Each episode has a max of 60 players. You’ll bump into each other, trip, be pushed down, pulled to the side, and just like the name implies, fall. A lot. The way the little beans are animated is cute and the nonsensical sounds just add to their charm. You’ll almost welcome getting knocked down by obstacles, flung across the field by a giant fan, or pulled off the stage by a fellow player. It’s chaotic fun.

Yes, there’s griefing but griefing is part of the game. As insidious as it can be in some games, you can’t really help but laugh at some of the antics and chaos that it can ensue. These kinds of clips are probably my favorite ones to watch and, dare I say it, even do myself to others in the game. In one game, Rock’n’Roll, you work as a team to push your giant ball from one end of the field down to the other and into a basket. The first two teams out of three to do this advance to the next round, but more often than not you’ll find members of the opposing teams trying to stop your ball from advancing. Your only defense is to do the same to their balls and grab and block opposing players.

Some of the other games include Fruit Chute where you have to race up a conveyor belt going in the opposite direction while giant fruit is shot at you from all angles by cannons placed around and above the course. Slime Climb has you racing up an obstacle course while the course is submerged slowly in pink slime. My favorite is Hex-a-gone, a very Q*bert-like game where the hex tile you’re standing on will disappear after a second or two. There are multiple levels you can fall through before you hit the inevitable pool of slime:

Hex-a-gone is my favorite game mode and only appears as a final round.

There’s something deceptively simple about the game that makes every round feel winnable. But when you lose due to a bad luck or being griefed, you can easily find yourself yelling at the TV. It’s rare that I’ll loudly express myself in any online game in victory or defeat, but I’ve yelled at the TV playing Fall Guys: Ultimate Knockout more times than I ever have playing video games. Royal Fumble is, like Hex-a-gone, only played during a final round. There are many players but only one tail and you have to be the one holding it when the timer runs out to win:

This one match had the whole family yelling and screaming at the TV like no other game has ever done. It was a good time. 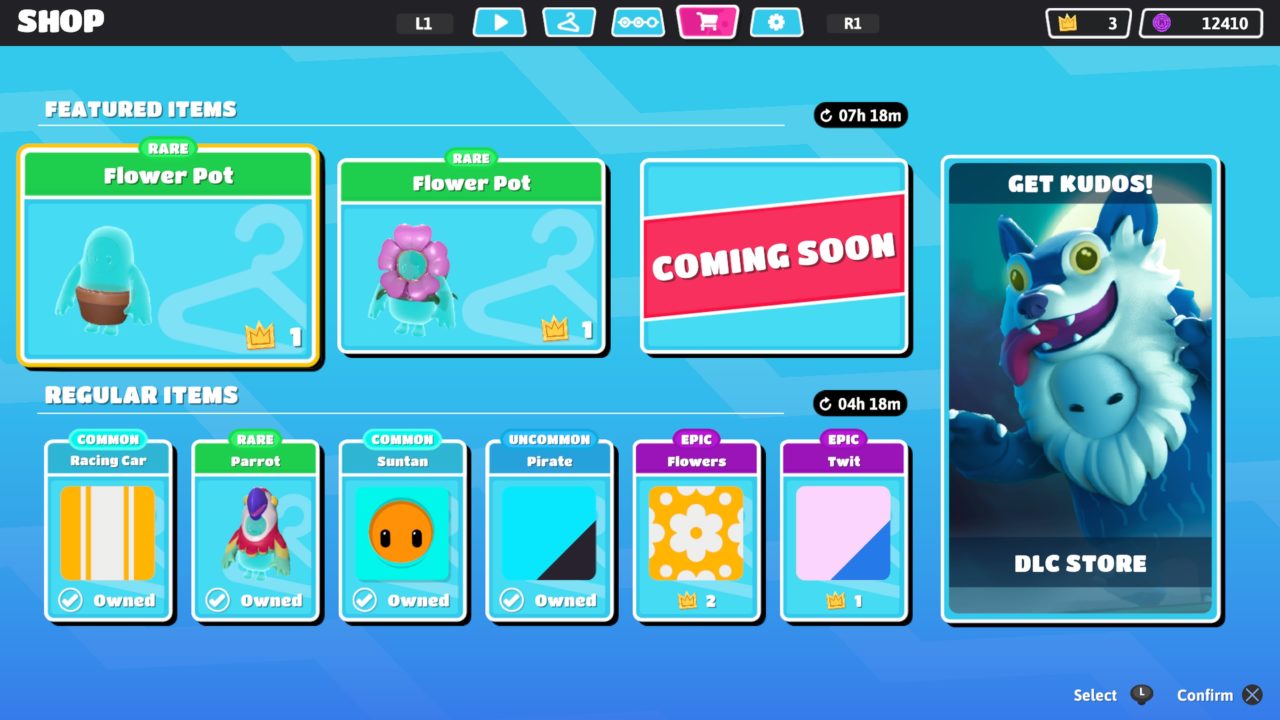 You can dress up the bean in a variety of costumes that can be unlocked as you level up or bought using the in-game virtual currency called “kudos”. Like other games featuring skins, there’s a micro-transaction model where you can buy more kudos but it’s unnecessary as they are really easy to get and amass. There are other DLC packs as ranging from $5 – $10 and the offer some combination of unique costumes, kudos, and gestures, all cosmetic items which have no impact on the game other than your own enjoyment. I normally loathe micro-transactions but I’m okay with cosmetics. Fall Guys makes earning costumes and gestures so easy that there’s little to no FOMO. Because even if a particular costume is slightly out of reach, there is no shortage of other great ones you can dress your bean in.

The other type of in-game currency are crowns and you can’t buy these. You can only earn them from winning an entire episode or as a level up award of which there are exactly 4 on the whole track from level 1 to the cap of level 40. And the crowns will net you some of the more premium costumes. 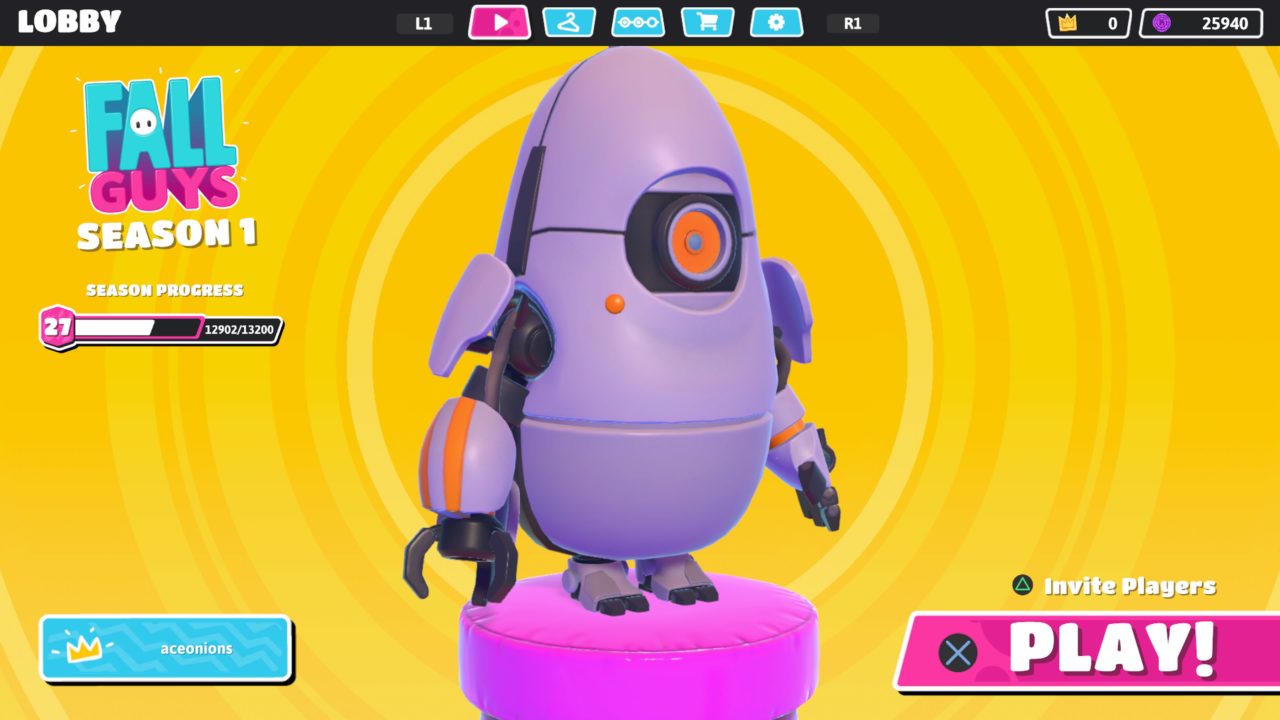 P-body from Portal is one of the most expensive costumes in the game costing 5 crowns each for the top and bottom halves. It’s the first crossover costume but I guarantee it won’t be the last. The popularity of the game combined with how easily the beans can be dressed up as pretty much anything creates an opportunity for brands to want inject themselves into the game. Even Mediatonic, the developers of the game, are aware of this. They are currently auctioning off the chance to have a branded costume in game with all proceeds going to charity.

The game is all very cute and fun with its bright colors and non-violent game play. Shooters certainly have their place in the Battle Royale genre, but it’s not really something that appeals to me. Fall Guys: Ultimate Knockout though is a fresh take on the formula and well worth the asking price. Sony recently declared it as the most downloaded PS Plus game of all time globally. I’m honestly not surprised by that at all. Fall Guys is easy to pick up, appealing to all ages, and, most importantly, fun. There’s a certain kind of joy that can be felt from the cuteness, the colors, and the presentation of it all. It easily gets a 5 out of 5 stars from me. It’s replaced Splatoon 2 as my go-to for a quick gaming sesh and that is saying something. The only thing I can knock the game on is that it’s only on Steam and PS4. I’m hoping and guessing it’s just a matter of time before it shows up on Switch and Xbox because I want everyone to have a chance to play this.