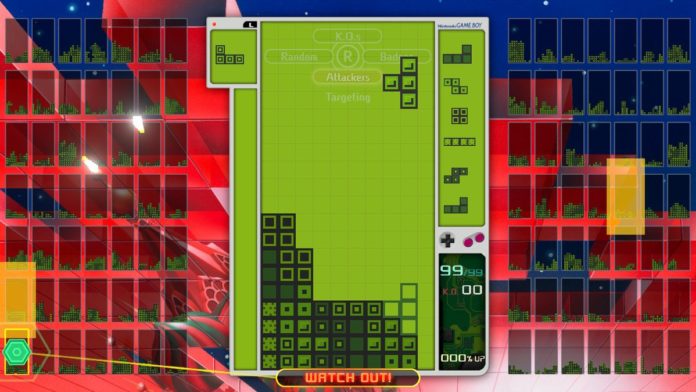 PUBG. Fortnite. Apex Legends. They all have one thing in common: they suck.

Alright, alright, I admit that is an incendiary comment but it doesn’t make it any less true! There’s really only ONE Battle Royale game you need in your life and that’s Tetris 99. Why? Let me count the ways:

Okay, that’s 8 reasons why Tetris 99 is the best Battle Royale game. I tried to come up with 10 but I’ll stop before I sound like I’m scraping the bottom of the barrel. I do think reason number 7 is the best reason though.

If you’re a Nintendo Switch Online subscriber, there’s no reason not to own this game. Tetris 99 is free for subscribers. It compiles all of the best tweaks to the game play (up for fast drop, ghost piece, hold spot), and drops you in with 98 other players. I’ve never had a single instance of stutter or lag, and getting a Tetris (clearing four lines at once) is even more satisfying than before as an attack or counter-attack.

I owned the original Game Boy and loved it. I drained so many double-A batteries on that thing. Tetris couldn’t have been a better pack-in title as it provided an endless amount of fun. The same can be said about Tetris 99 on today’s Switch (with a subscription of course). A solid 5 out of 5 stars.