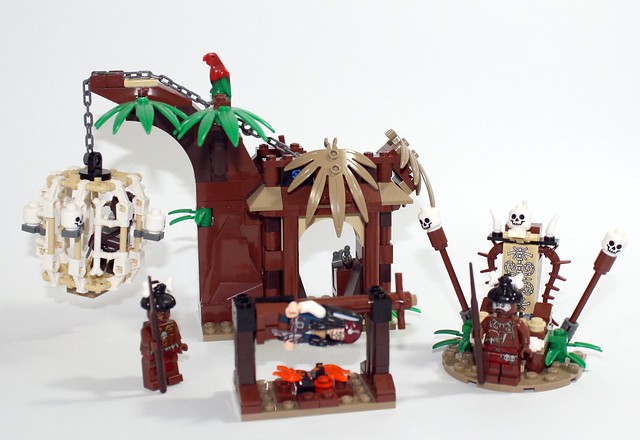 Canibal Escape is one of the cheaper sets in the Pirates of the Caribbean line, and recounts a scene that the majority of us probably forgot shortly after seeing it in the second movie. Can such a throwaway scene make a decent set?

Initial impressions tell us, perhaps. It’s a decent enough playset for the money, and one of the better part/price ratio sets in the line. You get Will Turner, Captain Jack, and two Cannibals (which does make me wonder if all LEGO are cannibals, given that they’re all the same plastic). The set itself is the cannibal throne, a spit, and a hut/tree with a hanging bone cage.

For the minifigures, we get yet another Jack Sparrow in the same white/blue/red motiff we’ve seen in the other inexpensive sets, save another head, this one with a tribal paint pattern. Don’t get me wrong, the Captain Jack figure is done really well, and looks great, but he’s just so much the same.

Will Turner is the somewhat smug and unkept pirate from the second movie, and I have to admit, I somewhat want to build a minifigure of me just so I can pretend he’s there to slap that little mustache off his minifig face. But besides that, we get a new braided hairpiece, a dark brown shoulder sword holster, and a torso that could be used for a less annoying figure. I guess what I’m saying is that the figure is somewhat meh, even if it’s an important character. 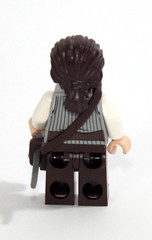 The two savages are an interesting lot. They’re actually a good representation of the characters in the movie, even if the whole scene just keeps slipping out of your memory. The hair pieces sport the little dog bone that’s been popping up in tons of sets as of late, spears, and even have a little implied man-thong going on. On one hand, the movie itself made the savages racist caricatures that no one really cared about, and LEGO captures those caricatures well. Problem is, where are you ever going to use these figures once you decide to take this thing apart?

I know it seems like I’m being harsh on these figures, but they’re all okay. But unlike most of the other sets in the Pirates lineup, which are just glorified battle packs, this set is going in the reverse direction. The minifigures are almost afterthoughts, nothing really special, and the set has more promise.

The main feature of the set is a cave (or what LEGO call’s the “Cannibal Hut”, though huts should have some vaugely hut-shaped features, maybe it’s me) and the cage where you can toss Mr. Turner. The cave is a BURP with a mish-mash of parts. It’s simple, not very pretty, but it works. You get a bottle, which is win, and a parrot. The only real complaint I have with the whole thing is the hinges not matching other colors, so when you look at what’s holding up the tan leaves, it looks bad. But you get a decent mix of parts, and most of the colors match, which solves one of my biggest complaints in sets (colors that are just out of place). 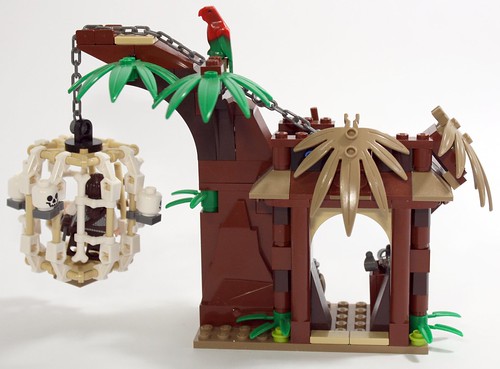 The cage itself is a somewhat fragile mixture of bones and clips, but it works, and it’s actually decently accurate to the movie, for what that’s worth. Not as colorful, to be sure, but you know what it is. The biggest problem is the ugly way the chain connects to the top. It would have been nice to see a way to wrap it around the cage, or at leat match the color. The black brick doesn’t look right.

One nice bonus is that you get a backpack that has been seen in the city sets no one ever buys. So, that’s cool, along with a bottle, crate, and a couple extra swords. Which makes sense, since the cannibals are carrying spears… 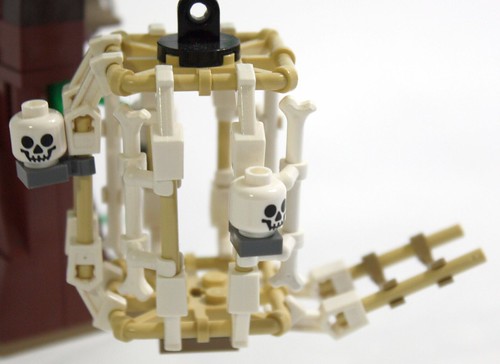 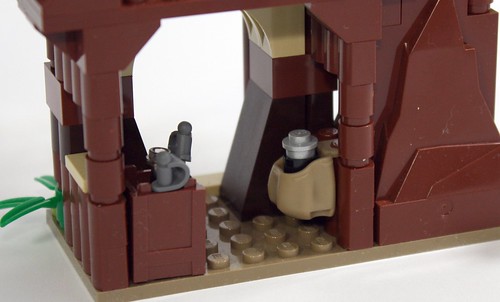 The throne is simple, with plenty of tiles and the pre-requisite skulls that even tea sets in the pirates line seem to feature. It works well when viewed from the front, but do not dare look behind to see what a mess it is. The artwork on the back of the throne is a printed tile too. I’m actually a little sad, I like the 2×4 tiles, would love some more in tan. 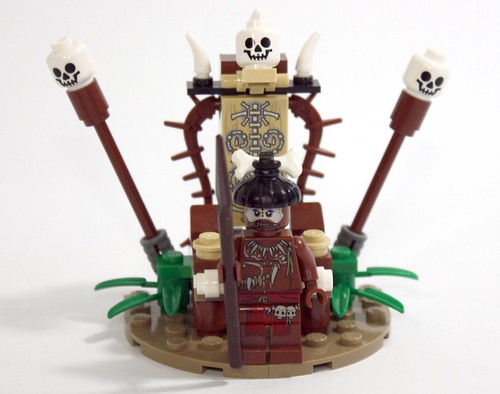 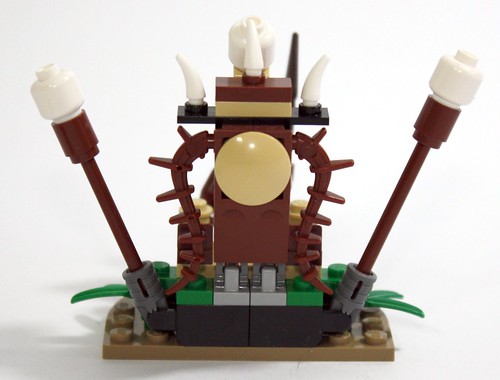 The spit is a surprising star, simple but effective. I quite like the part, and it’s easy enough to do that I could toss it right into an Ewok village and start roasting up Luke Skywalker for an afternoon snack. R2-would be harder to attach, but I welcome the challenge. 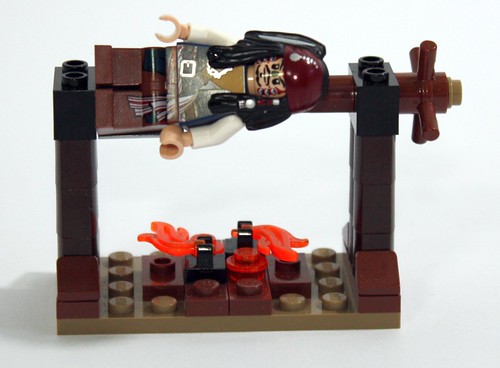 And really, that’s about it for this thing. As a playset, this set has it far better than most of the rest of the line. It has a throne that does it’s job, the fire and spit are simple and fun little additions, and the cage and cave sections are actually a decent little set. But the whole affair is defined as a “good enough” set. Nothing in particular shines, except maybe the spit, but you can actually play with it. That makes it better than the Captain’s Cabin and Fountain of Youth sets. It’s a decent playset, worth it on sale, and has a good mix of parts, if brown and dark tan are your thing. But there are certainly some negatives to the set that detract from it overall.

Verdict: Buy when its on sale