I think I’m safe in saying that behind Spider-man the X-men have been Marvel’s most popular (and profitable) property over time, so it was no surprise that the only other non-Avengers set was X-centric. With a multitude of X-titles to choose from and nearly a hundred different characters who’ve been part of the core X-team alone at one time or another, it must have been really difficult to choose who would headline this set… Just kidding. I’d have been shocked if the first X-set didn’t at least include Logan if not revolve around him and Magneto is the highest profile X-villain, so that’s a no brainer too. The only real wild card in this set was Deadpool. He’s a fanboy favourite to be sure, but he is an odd choice for this set. He’s a fun guy and things are usually more interesting when he’s in the mix, but it’s a bit akin to including the Punisher in the only Spider-man set available. While the merc with a mouth isn’t a “kid friendly” character, that’s not a bad thing for the older crowd and I think it actually opens the door for future edgy characters like Punisher and perhaps even Carnage. No, nevermind. That last one’s probably not happening.

At first look these are primo figs with some nifty unique faces and nice torso prints that are well worth the price of the set in my opinion, but they do have a couple of minor issues. I’m more than willing to overlook them, but they are worth mentioning in any case. Firstly, Magneto’s helmet is fantastic, but it makes his standard face print look like a worried old man instead of a confident revolutionary. The biggest problem is the fact the Wolverine’s hairpiece doesn’t come down far enough to cover the printing of his alternate face. Honestly, I don’t think I even really care, but it could possibly be an issue in the positioning and photography of an MOC and I figure it will probably really bug some folks. Deadpool is just plain awesome. He told me so. Wait… your Deadpool fig talks to you too, right? Forget I said anything. The secondary build in this set is the smaller of the two “choppers”, Wolvie’s vintage motorcycle. Ok, so calling it a build is a bit of a stretch. Pop the top and bottom together, snap on the wheels, slap on a 1×1 trans-clear round stud for a headlight and Voila! Again, don’t get me wrong, this is a rare bike to begin with and this is the only set where it comes in light bley. I will say I question it being listed as light bluish grey. It seems to fit somewhere in between that and pearl light grey to me, but again I don’t really care because it’s a nice bike and a welcome addition to my collection. I mentioned how this style of bike would have been more appropriate for the Captain America’s Avenging Cycle set when I did that review, but it works equally well for Wolverine here too.

The meat and potatoes of the set is the other chopper. The one piloted by Deadpool on the cover engaging Wolverine in some sort of mexican standoff with Magneto, or I guess those two are working together… for some reason. Either way, I think this set was influenced by the ABSOLUTELY TERRIBLE X-men Origins: Wolverine movie and the helicopter scene that made it into all the trailers for that eyesore. I really liked the look of this chopper when the set first appeared, which was nice because at the time the only set in the Marvel line that didn’t do it for me was the Loki’s Big Blue Truck Escape set (I still got it strictly for parts and to satiate my inner completist).

It’s very well built and I like the design, but it just feels like something is lacking everytime I play with it. One thing that really bothers me about the design, is the big open storage area behind the cockpit. They made no handle for a minifig to grasp as he hangs half out of the compartment and that’s not good because there’s no way for a minifigure to stand up in the space. You can have them leaning out as though they were peeking up front or you can sit them down in there, but standing is pretty much out of the question. Also, getting the fig in there is kind of a pain. It could just be that my fingers are too big and my son’s hand-eye co-ordination isn’t fine-tuned enough, but it was kind of a PITA. I ended up taking the roof off to put figs in there, but I don’t think that’s the intention of the design based on the way the cabins and cockpits are usually accessed and the fact the you’re removing the entire rotor assembly in doing so. I’m not a fan of the designer’s solution for the storage of Deadpool’s swords while he pilots the chopper, but it could be worse. Also, the inclusion of dual tail rotors threw me off, but it was a hit with my son and I have a thing for part symmetry. Two _____ are better than one, right? On the plus side, the colour scheme is great and it’s quite a nice assortment of parts that would make for a pretty good draft, assuming you could ever find enough of this set on the cheap. Good luck with that. The only real play feature, other than the general play that comes with any LEGO helicopter, is the pivoting flick-fire missile launchers on either side. It has a very limited pivot range which is not a big deal, but it tends to shift the dark red cheese slope that limits its turning radius as you can see in the above picture . Overall, it’s a solid build in construction and design if a wee bit dull. It can be difficult packing play features into these smaller $20-ish sets, but I think the Shelob Attacks and the new Spider Cycle Chase (which I will review next) sets did a better job with this balance. Vedict: I bought two. Three if you count the one I put away for my son. I got a BOGO deal and looking at the selection of sets in this price range at the time it was an easy descision to stock up. I wanted to get an extra of each of these figures just in case they don’t show up in any sets again. Luckily, the set itself is strong enough for me to warrant buying a second one without it just being about the figures. In the end though, I think the figures in this set are actually overshadowing the build and in that case I can only think of two good reasons you wouldn’t want this set; you don’t like the X-men, or you’ve already got twenty different LEGO helicopters. If you’re Ok with owning another (pretty nice) chopper and you’re an X-fan then you really should pick this set up, Bub. 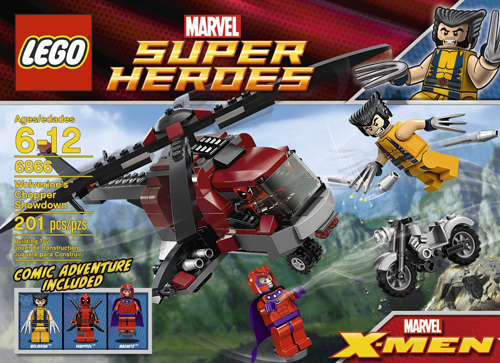