I’ve been on vacation for the past two weeks and just got back into the swing of things this past Monday. But I’m back to blogging now and wanted to share my experiences at Comic Con starting with the LEGO exclusives. I’ve been chasing Comic Con exclusives for a long time and have been witness to all of LEGO’s different iterations of distribution ever since they got into the exclusives game. And long time readers of this blog will know that I’ve never been a fan and criticized their methods, some years more harshly than others. I’m not one to pull punches either and will always be honest in my opinion with them, their products, and their practices. So, know that when I say they got it right this year, I mean it. 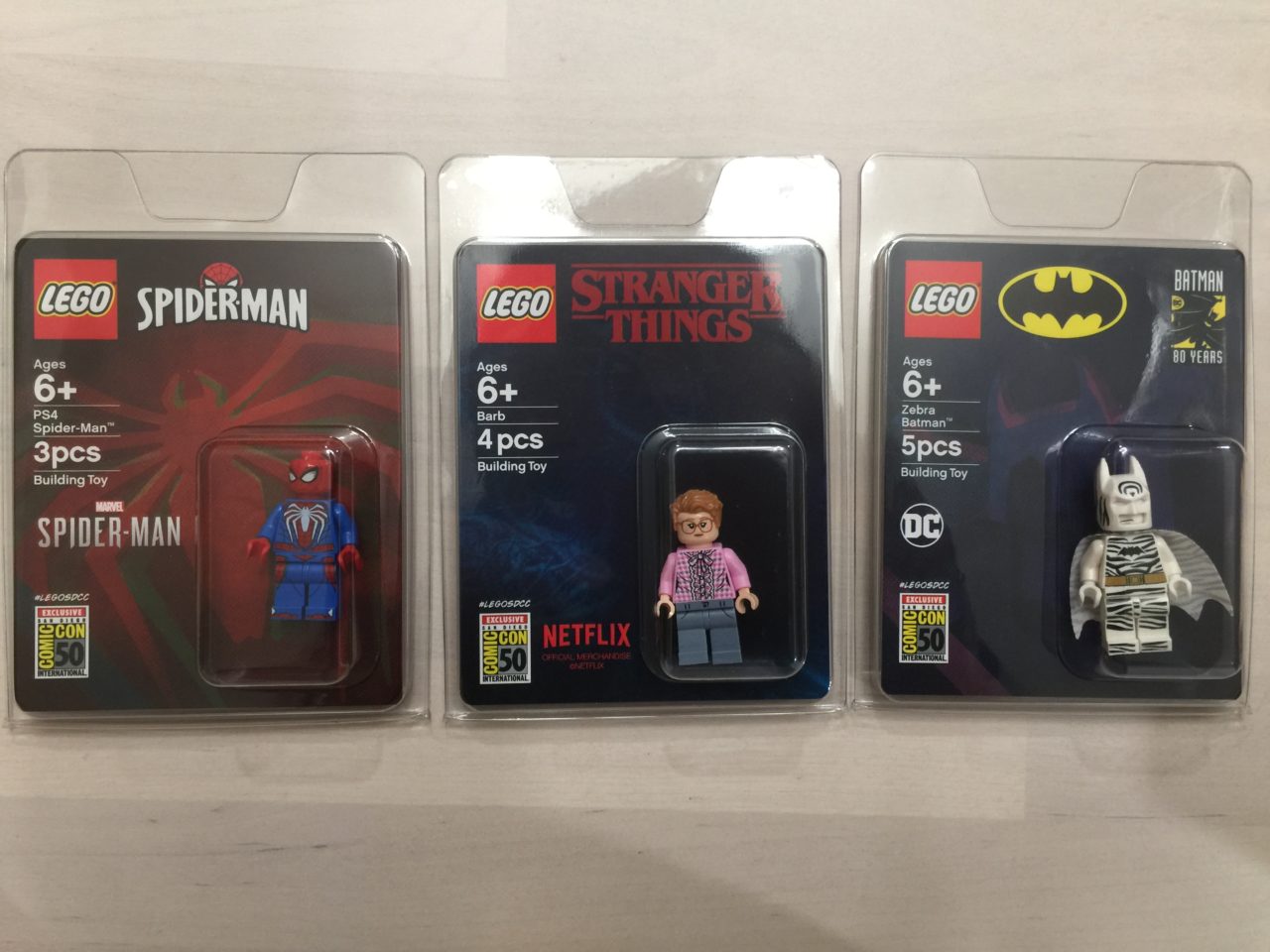 This year, they brought the iPad game back after a 1-year hiatus (last year, they used Comic Con’s exclusives portal to handle distribution) and one of my biggest gripes in years prior was the time they would start that iPad game. It always started at 12:30, sometimes a few minutes earlier but not early enough to make any measurable difference. And that was a bad time because for anyone to have a chance at the game, they’d have to line up first thing in the morning. The line would get so long it would go down the back of the convention hall, run along the marina, and go past the Marriott hotel, even reaching as far as The Cheesecake Factory. Or so I’ve heard. If you found yourself in line anywhere near the Manchester Grand Hyatt, you’d have zero chance. And really, they should send people down there and give them a warning that if they’re that far back in line they probably won’t even have a chance to play the game. That’s just common decency and respecting your fan base.

But back to the starting time. Like I said, having it start at 12:30pm was bad. You’d waste half the day waiting in line and you’ll most likely miss out on getting other exclusives or even attending a panel or two. It didn’t matter to LEGO, they weren’t the ones in line. They’d mosey on up there, set up their iPads and let the line run through.

This year LEGO started processing the line in the morning. The scheduled time was 9:30am but they started as early as, I want to say, 8:15am. This was TONS better because as soon as you were done you’d still have time to get in line to get into the convention hall and have a shot at getting other exclusives. You’d also still have the option of attending a panel or two or attend some other event. It was liberating in a way. I did not find myself questioning my life choices or getting burned to a crisp waiting outside in the sun for hours on end.

Another welcome change was that they tweaked the win-loss ratio of their iPad game. A little birdie told me that it was tweaked to around 80-20 instead of what it was before at about 60-40 or 50/50. While I do like those odds way better, first come first served is still, I think, a better method. Waiting in line for a couple of hours just to lose and walk away with nothing? Still disheartening, but even more so now if you fell into that 20%. 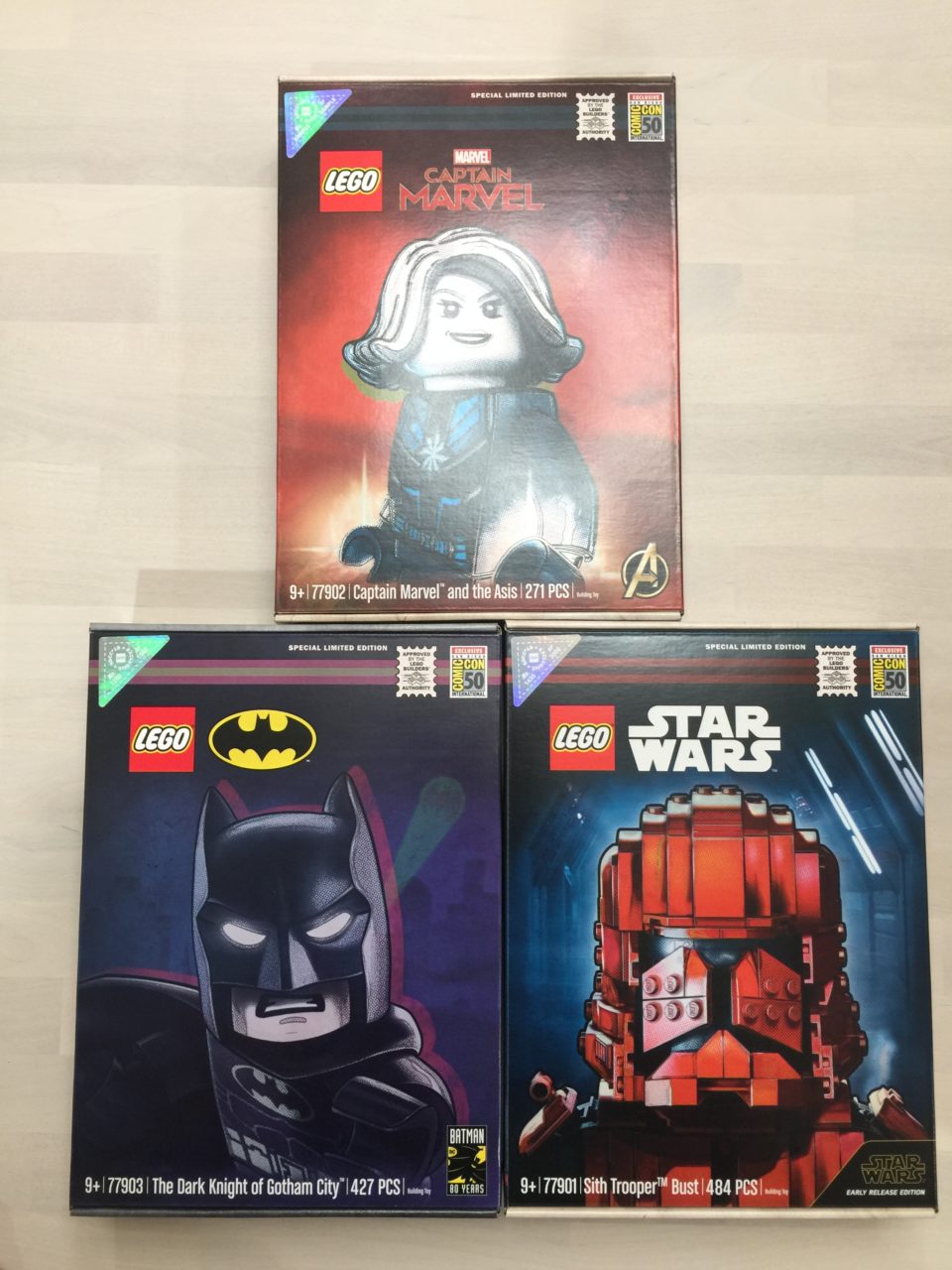 This is the second year in a row that Comic Con ran the most popular exclusives through their portal. Registered and confirmed attendees were given a set number of tickets each day, and they can enter any number of raffles with those tickets. Those who were willing to forego everything else to get in line for one in previous years now found themselves with the same chances as every one else trying to make a buck and/or nab an exclusive. That’s the good and bad of it in a nutshell.

Obviously, there are pros and cons to this approach but I’d like to think of it as having more benefits than detriments. mos_eisley still disagrees with me. With this raffle system there’s way less line waiting. If you win, you get a specific time slot to go pick up your set. If you don’t win, it’s one less thing you have to do giving you more time to do something else. And if you completely missed out, you still had a chance to still get them all.

On Sunday, there was a fair amount of leftover sets from people failing to pick up them up on their assigned days. Leading up to Sunday, it was up in the air as to how one could acquire them but I found out that morning that anyone purchasing at least $50 worth of LEGO would have the opportunity to buy one of the leftover sets. I thought that was a great idea, completely fair, and a win-win for everyone. It’s not too much money to put out on top of the cost of the exclusive, you get some more LEGO out of it, and the retail booth (operated by LEGOLAND California) makes some additional money. Win win for everybody.

How LEGO Can Still Improve

First thing I’d do is not bag the exclusive figures. This year, LEGO decided to bag up every single minifig and hand off the bags to winners of their iPad game. This point of this suggestion isn’t so much a quality of life issue for attendees, but for the poor soul(s) who had to sit there, bag up each exclusive, and then arrange them neatly back into a box.

Second thing I’d do is get rid of the retail booth. A friend brought up this point and it’s something I completely agree with. It takes up space that can be dedicated to more of booth activities. LEGO’s booth foot print is divided up between an activities space and the retail space, about a 70-30 split respectively. This year it seemed more crowded than ever on the activities side. They should stop selling sets, and just have a window where people can come by to purchase their exclusive set and that’s it. Maybe a keychain or two, or a small polybag. Everything they sell that isn’t the exclusive can be bought online and shipped for free. I’d be interested to see what kind of sales numbers they pull during the weekend vs. the cost of paying for staff and logistics.

They’ve addressed every major issue I’ve complained about in the past (the late start times and low win-loss ratio). There are a few minor ones that could be improved upon still but this is a start. Before, it felt like making changes to improve the processes moved at a glacial pace. This year, the process felt so polished and went so smoothly, it’s a wonder why it was never implemented like this before. It could be because half of the exclusives, the retail sets, were handled by Comic Con’s exclusives portal.Â  It could also be because there’s a new crew in charge; I didn’t recognize anyone running the distributions or manning the booth as from years past.

Except for that one guy from LEGOLAND that sells multiples of all of the exclusives and throws in extras and extras of all of the minifigs to the guy from Skybound every year. I recognized that guy. He was still there.