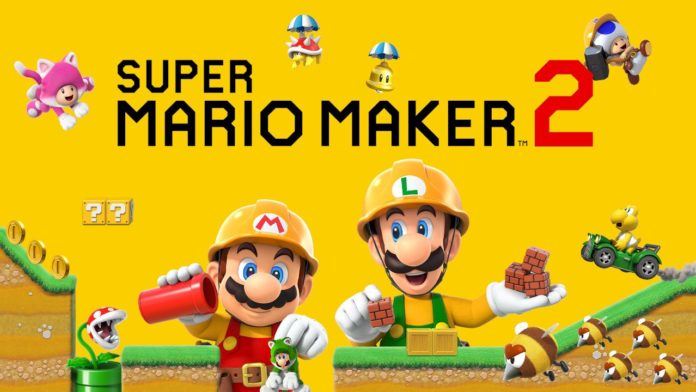 My favorite Mario game is Super Mario World, with Super Mario Brothers 3 as a close second. They allow the player to take things slow, learn the level, but soon enough a moderately experienced player of the game can run through it at top-speed. With additions like the cape and the tanooki leaf, the items only encourage players to find new, faster ways to beat the levels. Stay low to the ground with tight platforming, or soar up high. Those levels offer a wealth of options for traversing the levels, and most can be completed by me (someone experienced, but not great) within maybe a minute.Â

Later games, the infamous â€œNewâ€ series, take a different approach. Slower paced, formulaic levels, more solidified mechanics, but thereâ€™s a lack of that glorious speed, and a lack of encouragement for it. The games therefore play like a boring, samey mush of plastic to me. 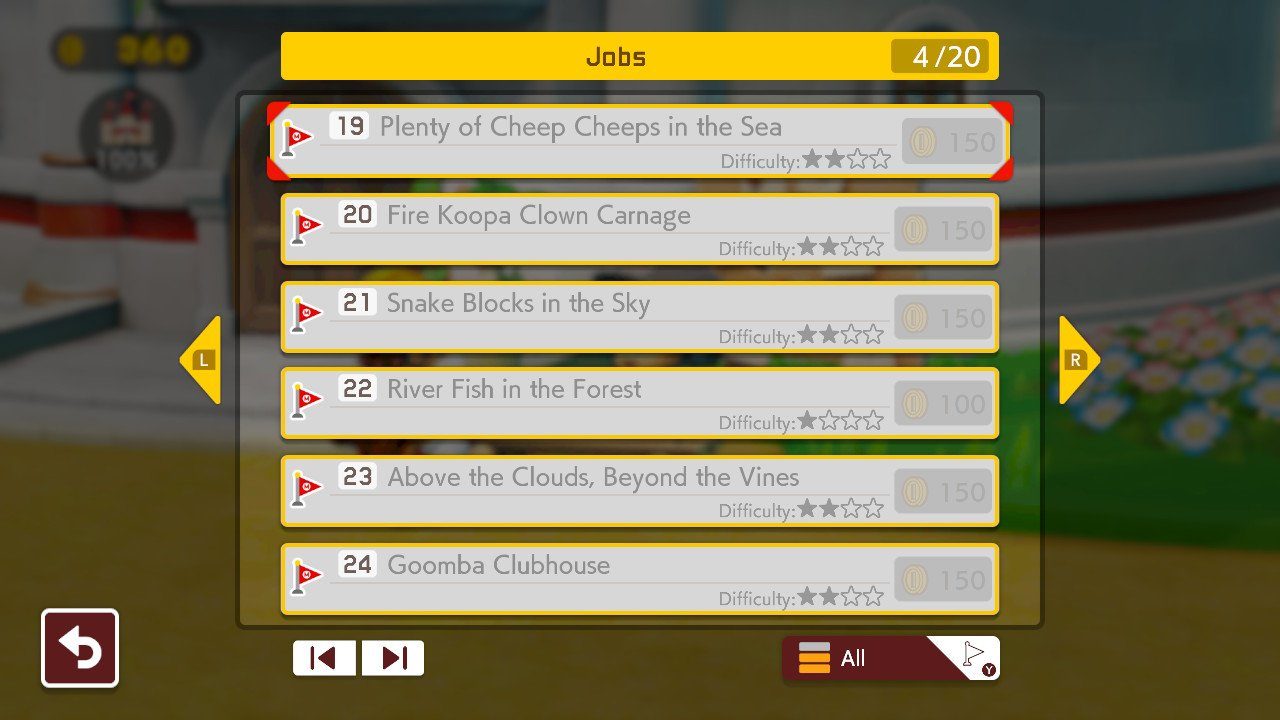 SMM2 offers a story mode with over 100 levels, but many, if not most of them, while bursting with creativity, fail in that quintessential Mario-ness that Iâ€™m used to. It may look like a Super Mario World level, but prepare to inch along slowly. Some of these levels took me five or more minutes to complete. However, the â€œstoryâ€ – the process of rebuilding Peachâ€™s castle – feels like the best part of mobile games. Itâ€™s a nice visual encouragement. And while the levels in general may not be stellar, there are a few bright spots here and there. I found myself thinking â€œmaybe this level will let me run fastâ€, which kept me grinding through the levels. And with a bunch of unlockable side-levels and outfits, it takes a solid chunk of time to beat. Some reviewers call the story mode â€œworth the price of admissionâ€, and while I completely disagree, itâ€™s definitely substantive. 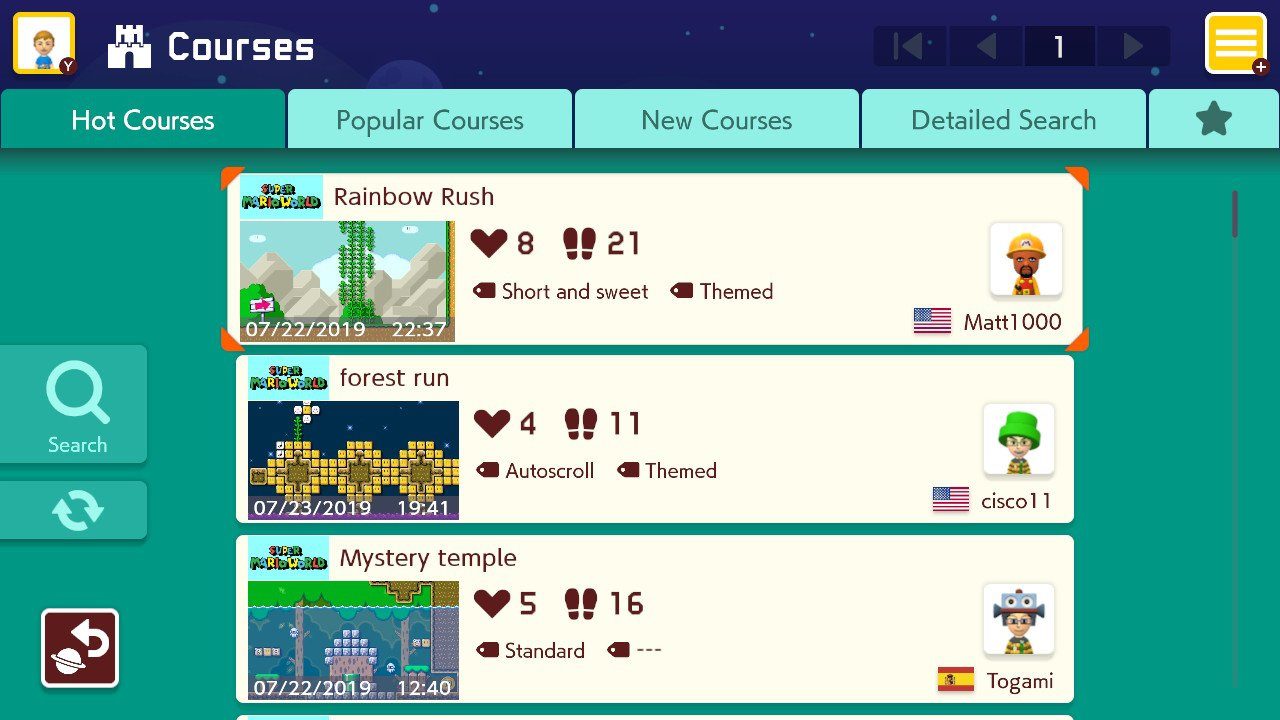 Whatâ€™s worth my admission is the nearly infinite number of Mario levels curated by a bunch of randoms on the Internet. Now, if you know anything about randoms on the Internet, then you know that a lot – sorry, most – of the levels suck. Unfairly hard, or stupidly complicated, or just confusing. Itâ€™s definitely quality over quantity here, and while Iâ€™ve found several good – really good – levels, Iâ€™ve found probably ten times as many levels I quit out at first, cheap death. Now, maybe that says something about my lack of persistence, but I never enjoy feeling cheated in a game. Levels involving pixel-perfect jumps with no room for error, having to know what jumps out at you from off screen, or combining mechanics in incredibly specific ways isnâ€™t fun (obligatory if itâ€™s not fun, why bother? quote). Itâ€™s like banging your head against a wall over and over until you find the perfect spot and it crumbles. You just put enough time into something for it to pay off. I love a good challenge, but it is allows no room for innovation then itâ€™s not a challenge. Itâ€™s a specific set of rules that I have to find out, and then follow. 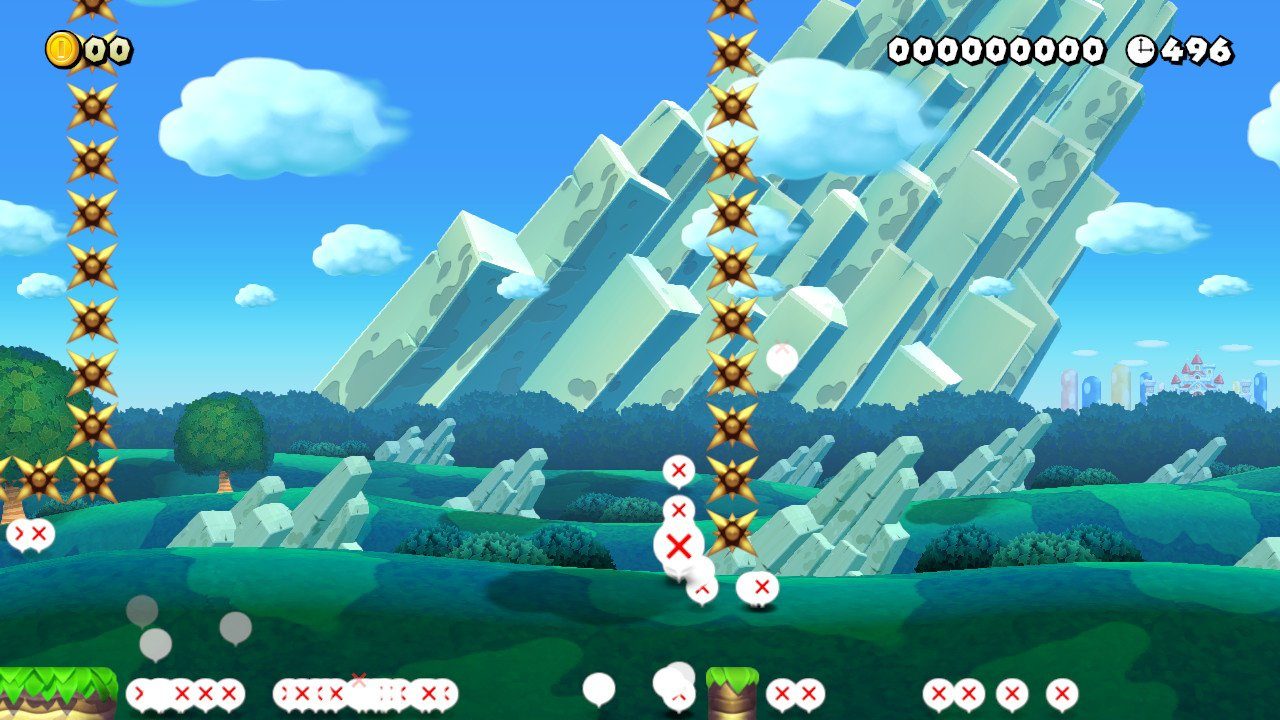 A level like this is challenging. But it isnâ€™t fun.

Timing. Speed. Reacting to fair challenge. A clearly defined set of rules. These are the things I value in a Mario game. Hell, in a platforming game. So itâ€™s a shame, though not a surprising one, that so many of the levels are muck. 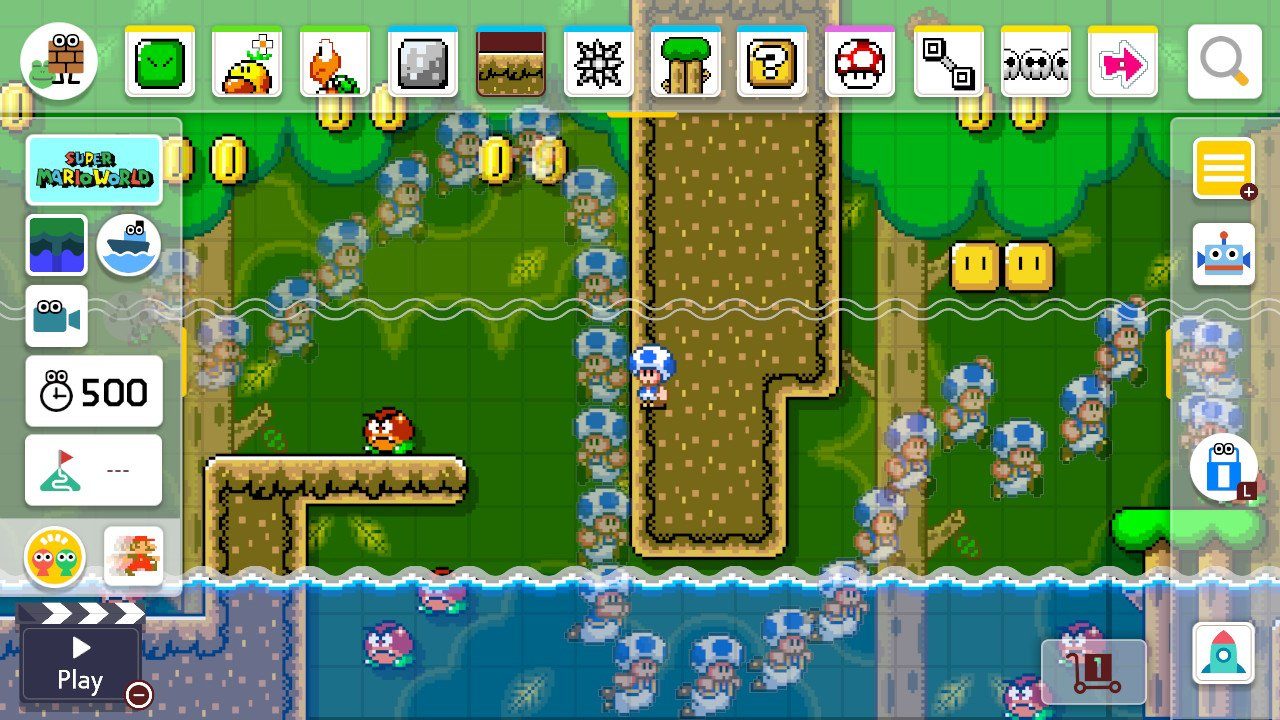 Because the level creator is so magical. A wealth of tools, a great UX, and a quick and easy way to test your level out, as well as see where you messed up. A feeling of pure joy emanates from creating your own Mario level, and I get why people keep dumping out these levels, though I donâ€™t condone it. Itâ€™s fun to make stuff.Â

The new additions can add a depth to these levels not really seen in a mainline 2D Mario game. The grabbers make momentum really strange; the level requirements, while sometimes infuriating, in the right hands can add a perfect challenge; and the tracks and everything you can place on them – blocks, enemies, coins, hazards – lead to some incredibly inventive ideas.

The four modes carried over from the original Mario Maker each contribute enough differently to be fun. The original SMB focuses on tight platforming, SMB3 adds a measure of momentum with the P meter, SMW has the spin jump, which completely changes Marioâ€™s movement, and NSMW adds wall jumps, triple jumps, and ground pounds. Not to mention, each mode has some special items that can only be accessed in that mode – giant mushrooms, tanooki leaves, capes, and propeller hats. The most creative levels take advantage of their specific mode, and use it in conjunction with one or two mechanics. 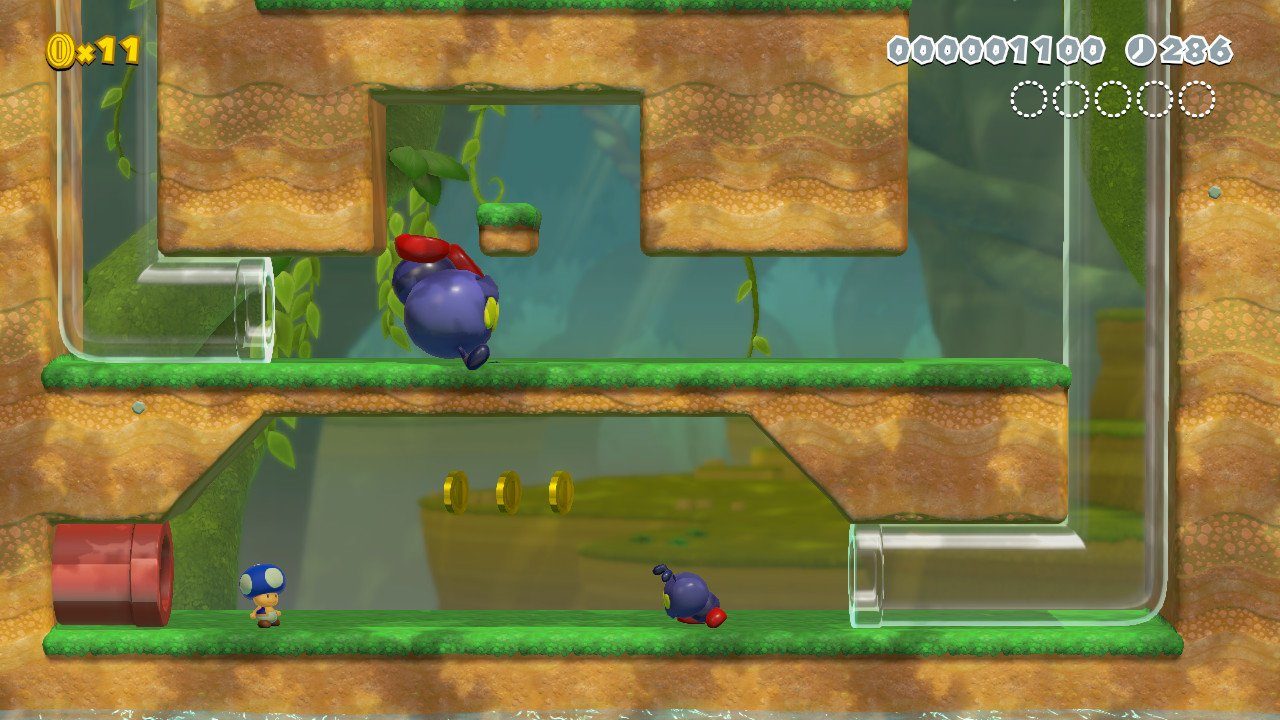 And the new mode, taking inspiration from the WiiUâ€™s Super Mario 3D World, shines. It adds new abilities, including long jumps, crouch jumps, and rolls. The cat suit feels so good to use. Clear pipes add to that momentum I crave. The new enemies are weird in that best way, adding a challenge that regular goombas and koopas never reach. The music carried over from 3D World is good enough to carry an entire game by itself. The new stuff, like the koopa car and builder hammer, can create some really interesting scenarios. Itâ€™s so much fun, and if the entire game was just in the 3D World maker, itâ€™d be worth it. 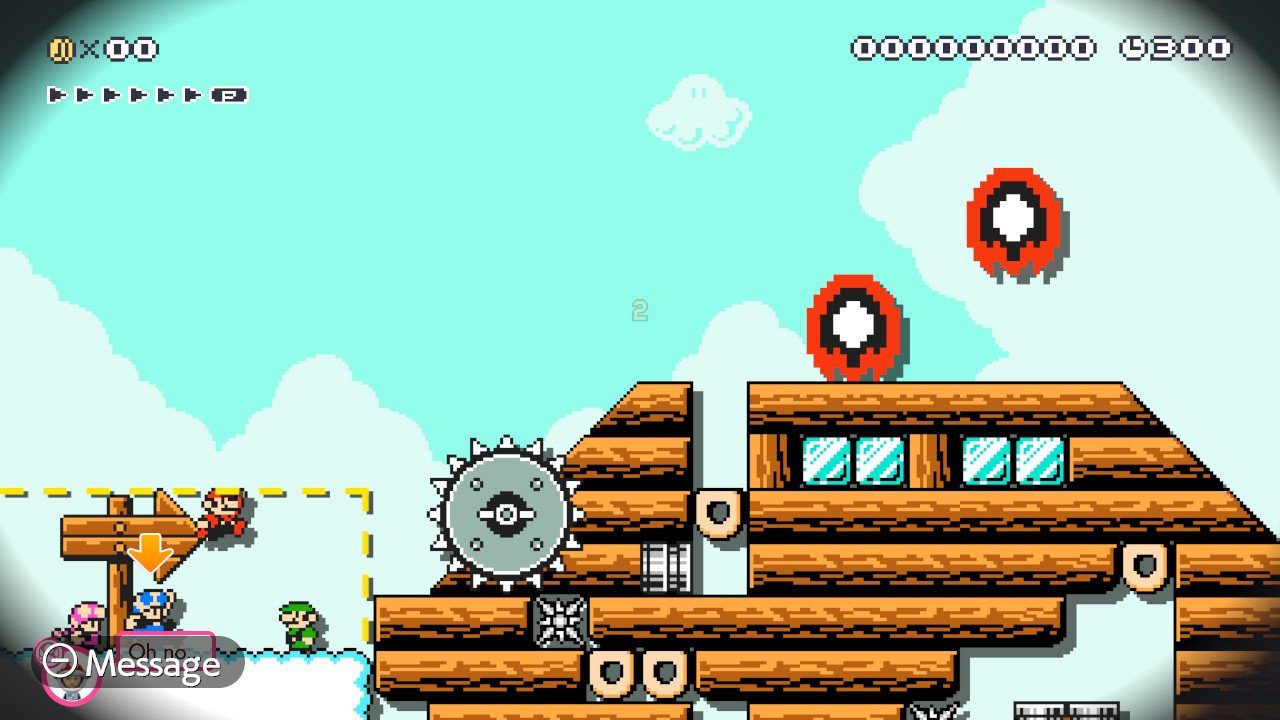 But, even judging the game separately from its users doesnâ€™t leave a great aftertaste.

Multiplayer Versus is a laggy mess, which is unforgivable for an online service in 2019. Especially for a simple 2D game. Some of the game mechanics can have subtle abilities which are never explained but required to beat certain levels. The Endless Challenge levels can feel really random for their modes. Instead of 100% relying on the difficulty based on clears for levels, it also takes smaller levels based on how the maker tags it. You know, a completely subjective judgement. Whatâ€™s easy for me is hard for, say, someone whoâ€™s played only New Super Mario Brothers games. Some of the clothing unlocks for your Mii are damn near impossible and completely contingent on other playersâ€™ response to your level. The advanced search can go either based on level clear or popularity, but for some reason not both. Thereâ€™s no checks on tags, meaning that a â€œshort and sweetâ€ level can take literally any amount of time.

All in all, itâ€™s a game that you get out as much as everyone else puts into it. If that doesnâ€™t make much sense, then, yeah. Neither do most levels.

Still interested? You can purchase Super Mario Maker 2 from Amazon: 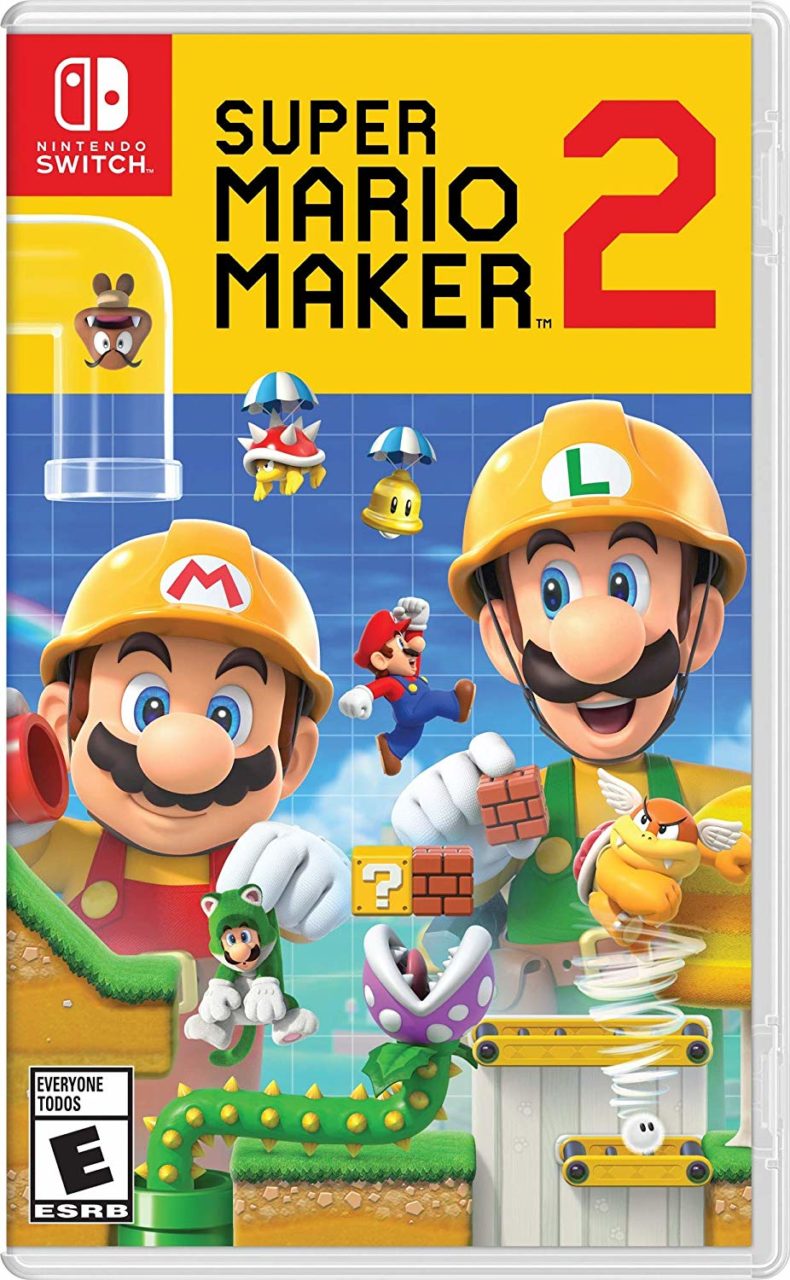 Like the review? Consider helping FBTB keep the lights on by donating or becoming a subscriber. We could always use the help. Thanks for your consideration.