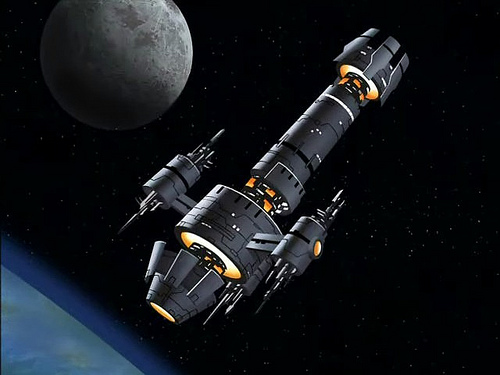 ON board the Watchtower in orbit far above the Earth, the Martian Manhunter is working to coordinate the efforts of the planet’s heroes. Using the station’s main viewscreen, he is able to communicate with a great number of heroes and teams to disseminate information more quickly. Time is not on their side.

“Then we are in agreement,” J’onn said to the group. “We’ll send a small team to investigate this object first hand and assess the potential threat while it’s still far enough away to do something about it.”

The many faces on the view screen nodded and agreed with the Martian.

“The way I see it, J’onn, the only decision left to make is who. We must be sure we make the proper choice. I am already beginning to sense the object’s presence as it moves towards us,” Professor Charles Xavier interjected, his image enlarging on the viewer as he spoke. “In a short time, I fear it may overcome my mental abilities and I will be of no use to our cause.”

Simultaneously, the majority of the faces on the screen began to volunteer and give reasons for their inclusion in the exploratory plan. The Manhunter raised his hands and motioned for the heroes to quiet down.

“We need to be absolutely sure that we send the right team for this mission. They must be able to withstand the possible bombardment of cosmic radiation and have the strength and experience to deal with whatever situation should present itself. We should also send only the two best candidates to better our chances to succeed. Shall we take a vote?” J’onn asked the group.

“It sounds like you’ve already got a duo in mind Mister J’onzz,” Union Jack said as he smiled and crossed his arms.

“I think I can speak for everyone when I say that we trust your choices J’onn,” added the Question and the group all agreed.

“Alright the decision is made. I will contact our team and give them their instructions. For now, let’s keep this quiet to avoid a public panic and keep our discoveries out of the wrong hands,” J’onn finished as he turned and walked away, each small square on the viewscreen blinking out as communications were cut.

A short time later, Barbara Gordon makes an unscheduled stop on her trip back to Gotham city. As she enters a small industrial complex, she is monitored by video surveillance and given an intense bio scan as she enters a freight elevator. After a quick trip down many stories she emerges from the elevator and rolls into a dark, cavernous room.

Moving to the center of the room, her entire demeanor changes and she takes off her glasses as she begins to speak. “They’ve made their choice and are preparing to send their welcoming committee as we speak,” she says as a devious grin spreads across her face.

“Excellent work my dear,” a firm voice calls from the shadows.

“How do we proceed?” asks another as some lights begin to illuminate the voices in the dark.

The Oracle rises from her wheelchair and steps forward as she begins to change from head to toe. The image of Barbara Gordon melts away to reveal the blue skinned visage of Mystique. She stops to stand before a throne where Victor Von Doom sits with several associates surrounding him.

“I suggest we wait to see how their expedition goes before we take action ourselves,” she says as her yellow eyes make contact with a smiling Magneto.

“She’s right of course. We should let those fools discover whether this will be a blessing or a curse for us,” Magneto said with a glance towards Lex Luthor on his right and Red Skull to his left.

Doctor Doom looked towards Brainiac and Sinestro for acceptance of further surveillance. As they all nodded in agreement, he turned back to Mystique and spoke in a somewhat reluctant tone. “You will continue to monitor them Mystique and we will remain here to await your report. We will not move forward with our plans until they have confirmed our suspicions,” Doom said grimly. “For nowâ€¦”