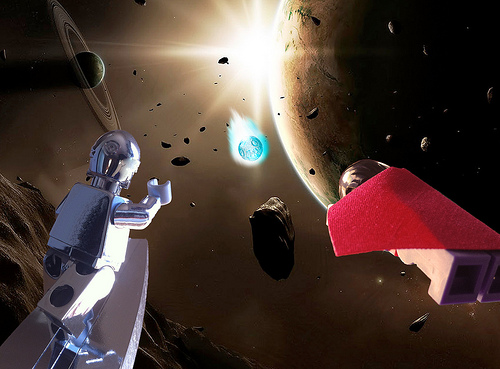 JUST outside of sector 2814, Superman and the Silver Surfer are flying into deep space to search for the object. Their task is to make contact and attempt to analyze it, assessing the potential threat. Chosen for their strengths, the duo have already pushed themselves to reach the object quickly and are already feeling its effects as they approach it.

“We’re getting closer now, Norrin. I can just make it out at the edge of my vision,” Superman said, utilizing the Silver Surfers telepathic link as he strains to see the object in the extreme distance. “The sooner we get there, the sooner we can get this over with and head back.”

“I know. I have been able to sense it for some time now, its power is growing the closer we get,” The Silver Surfer said flatly as the two accelerated to reach the object sooner. “I hope your confidence in our success is not misplaced, Superman.”

“Trust me, Norrin. I’m not that confident, just optimistic and I’ve asked you to call me Clark. It’s not like anyone is listening out here.” Superman said as he glanced at the Surfer with a smirk.

“You would be surprisedâ€¦ Clark,” The Surfer said as the two slowed down.

The object was now close enough to see with without enhanced vision. Its glow had grown since the scans they had viewed before they left Earth on their assignment and it had been picking up speed as well, until now. As they came to a complete stop they could observe the object had actually begun to slow down itself. As the two crept closer to the energy barrier they prepared themselves to breach it and make contact with the object.

“Even now it grows in strength, Clark,” The Surfer said with concern. “We should hurry, are you ready?”

“As ready as I’ll ever be. I have a bad feeling about this, but let’s get to it,” Superman replied as he reached his arms out to breach the barrier.

When the two heroes passed through the outer edge of the barrier, the energy began to spread and engulf them, pulling them in more quickly as the barrier expanded. As the strange radiation engulfs them they begin to feel themselves weakening. Superman looks towards Silver Surfer for assistance, but with his powers being drained, he can no longer hold his breath against the vacuum of space. As he grasps at his throat, he sees the Surfer has already lost not only consciousness, but contact with his board. As the Surfer slumps forward and drifts further into the energy field, Superman’s eyes close and his body begins to go limp.

At that moment, rings of light began to form around the two heroes. They glowed with mystical symbols that moved swiftly, rotating around them in multiple directions and pulling the heroes out of the energy barrier. As they breached the field, the rings pulled them quickly towards a huge glowing portal that had formed in the shape of an Egyptian ankh. As soon as they had disappeared, the portal closed to a single point of light and quickly blinked out. After a moment, the object began to move again, more quickly this time as it grew and sped towards its earthly destination.

BACK in Earth’s orbit on board the Watchtower, Doctor Fate closes his portal and nearly collapses himself. As Superman and the Silver Surfer are tended to by other heroes, Doctor Strange is discussing the situation with the Martian Manhunter.

“We were barely able to pull them through in time, J’onn. We were very lucky this back-up plan worked,” Stephen Strange said as he slumped down in a nearby chair. “Even through the portal it was able to drain our powers and although they’ll recover fully, Superman and the Surfer will be out of commission for some time. I just don’t know what we’re going to do when it finally gets here,” he finished, cradling his face in his hands.

J’onn J’onzz stood looking at his friends as they were being carried to the Watchtower’s infirmary on stretchers. Their attempt to make contact and deal with the threat had failed and he now felt their options were quickly running out. He turned and looked out a window at the earth below, sighed and spoke softly to the sorcerer supreme.

“If might and magic are of no use against this threat, where do we go from here?”