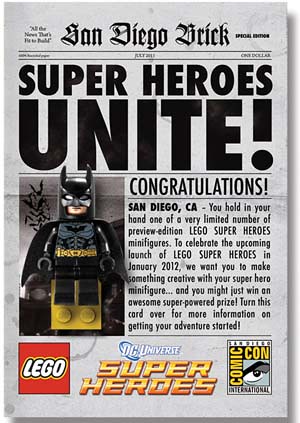 Variety reported a few hours ago that LEGO now has the full DC Comics license. In short, expect to see LEGO sets based on their most popular characters including Batman, Superman, Wonder Woman and villains the Joker, Bane, Harley Quinn and Lex Luthor.

LEGO will unveil the initial wave of sets at Comic Con which kicks off tomorrow night. 3,000 minifigs of Batman and Green Lantern will be “distributed”. FBTB will be there all week, so stay tuned for our full coverage.

Full article snippet below, link to actual article below that:

Warner Bros. has expanded its relationship with Lego, granting the toymaker access to DC Entertainment’s complete library of comicbook characters and stories to launch DC Universe “Super Heroes” as figures and playsets.

The multi-year licensing deal, made through Warner Bros. Consumer Products, will start rolling out the new line in January, starting with 13 characters, including Batman, Superman, Wonder Woman and villains the Joker, Bane, Harley Quinn and Lex Luthor.

The first toys will be shown off at the Lego booth at Comic-Con Intl. in San Diego, where 3,000 exclusive Batman and Green Lantern minifigures will be distributed to launch a promo that runs August-December, enabling fans to create and submit videos, photos or illustrations of the characters to win trips to Legoland and Warner Bros. Studios.

WB and Lego had already been producing toys and videogames around the Batman franchise, and will launch a new set of playthings around next summer’s “The Dark Knight Rises” through the Lego Batman collection. The “Lego Batman: The Videogame,” published by WB Bros. Interactive Entertainment, has sold more than 12 million units since 2008.”This partnership gives builders a chance to recreate the characters, vehicles and worlds of some of the most iconic super heroes, so they can relive the action and even customize it, a proven and winning formula in Lego construction,” said Jill Wilfert, VP, licensing and entertainment for the Lego Group.