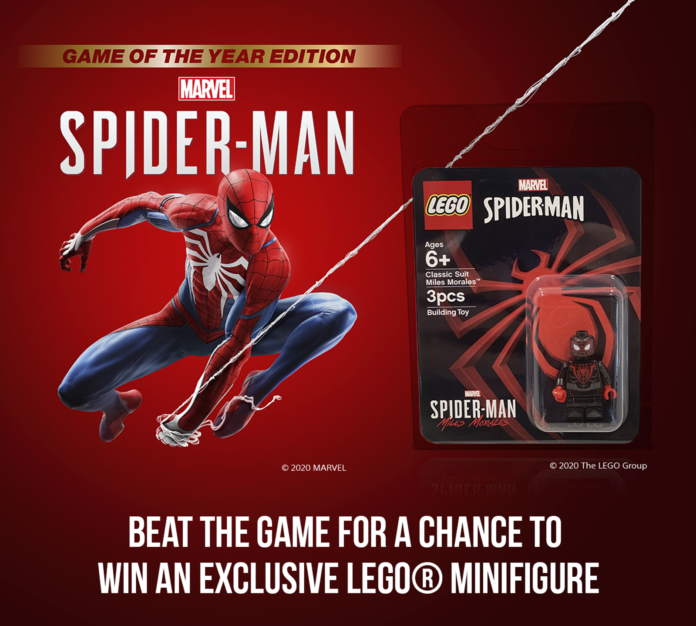 Is this another Comic Con exclusive minifigure distributed by other means since SDCC was cancelled? Looks like it, smells like it*, so it probably is. Just like the Supergirl from the DC Fandome event, Classic Suit Miles Morales is being given away but with a tighter restriction: you have to have earned the “End Game” trophy from the Spider-Man PS4 game to qualify. If you’ve done that, head on over to the The Be Greater PlayStation X LEGOÂ® Sweepstakes page to opt in. Many will enter, few will win. And the most unfortunate thing about this sweepstakes is that it seems to be limited to US only.

The End Game trophy is achieved after you complete Act 3 of the game by beating the final boss. You can’t miss this trophy if you complete the story. Not gonna spoil who the boss is for you in case you haven’t played it and intend on doing just that to try and get the LEGO Miles Morales figure. You have until 11:59:59 pm ET October 29th to get the trophy to qualify. Winners will be notified via email.

Earn the "End Game" trophy in Marvel's Spider-Man on PS4 for a chance to win a LEGO Spider-Man Miles Morales Minifigure.

Finish the game by October 29 and enter to qualify: https://t.co/HF4hVWaxLR See rules for add'l details. pic.twitter.com/9nyRTt4mYO

Thanks to L3g0monster21 in our discord for the heads up.

* For the record, I don’t actually have one to smell. But with a lot of luck, I will.