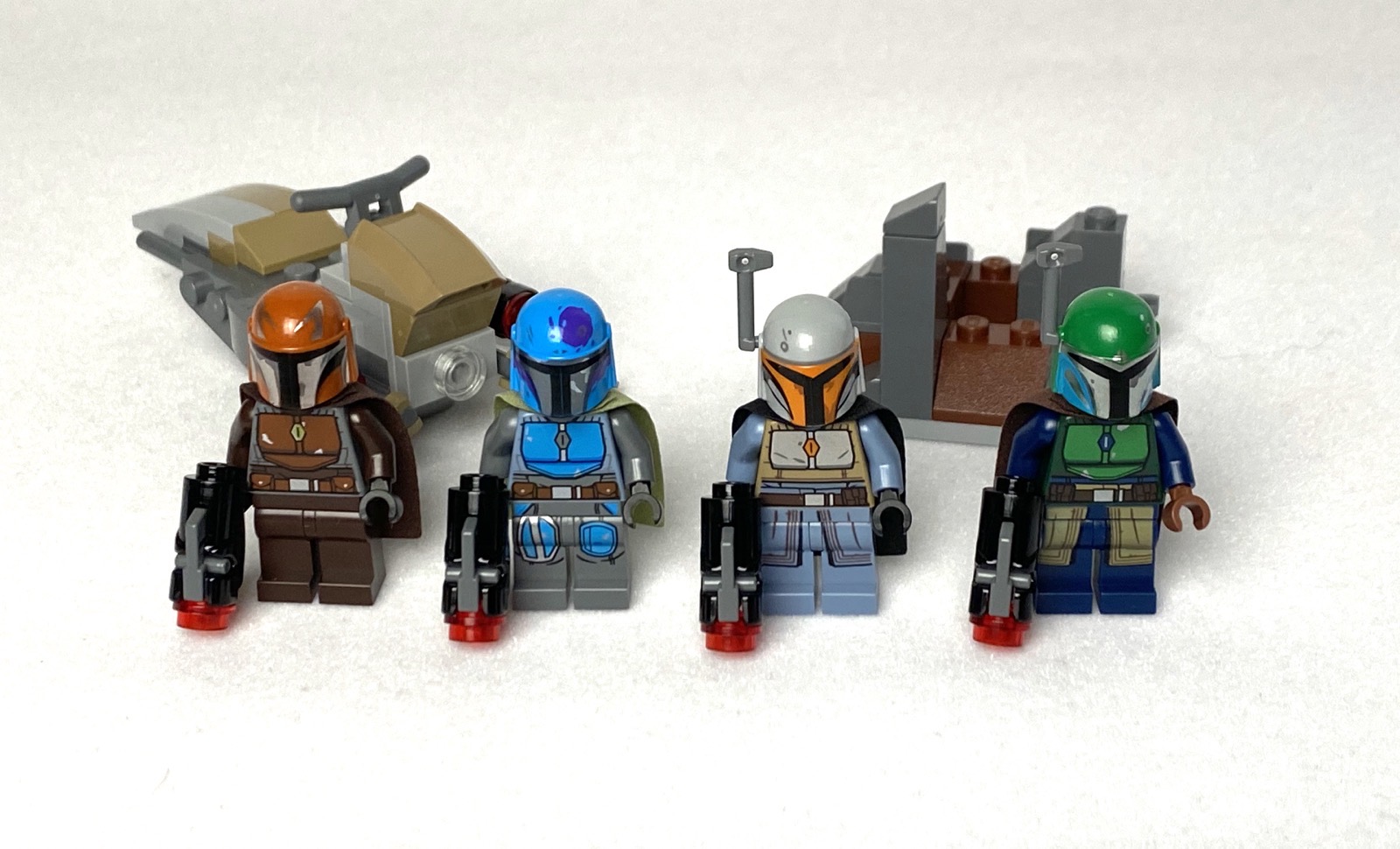 I can’t remember the last time we reviewed a Battle Pack around here. We may never have. They’re mostly simple little builds where the main attraction is the minifigs you get in them rather any of the dinky little models you get. 75267 Mandalorian Battle Pack is no exception to that pattern but what makes it interesting is its somewhat loose tie-in to the best Star Wars story since Rogue One: The Mandalorian. 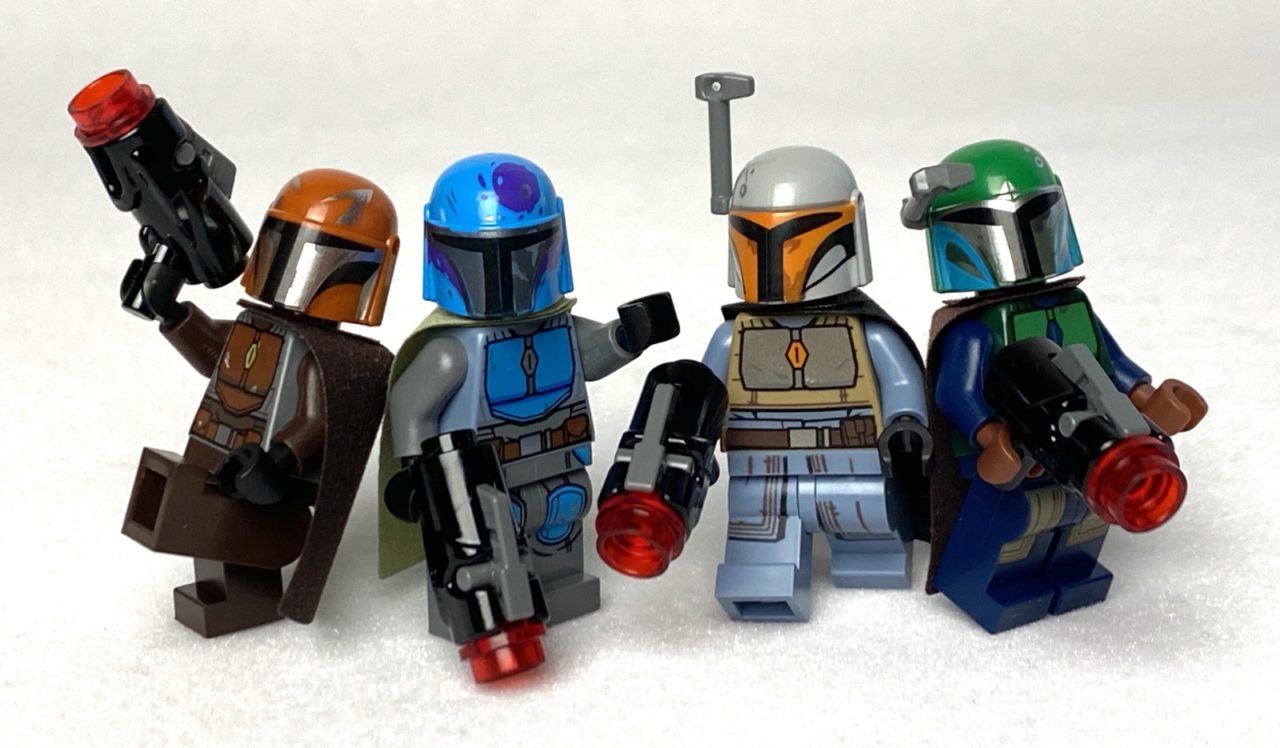 The most striking thing that I noticed was just how brightly colored these guys are. I mean, they are fresh-off-the-factory-floor bright. LEGO did try and dirty up their armor a bit but their bright palettes are easily spottable in the darkest night. But that’s okay, these are kids toys after all, but they get 0 points for show accuracy. The rainbow Mandalorians you get in this set aren’t really based on the ones you see in the show. I don’t know, maybe they are. The Mandos I do remember from the show, the ones that left a lasting impression, are not in this set. Where’s Jet Pack Mando? Heavy Infantry Mando? Armorer Mando? We don’t get any of those but we do get NFL Team Fan Mandos. Introducing: 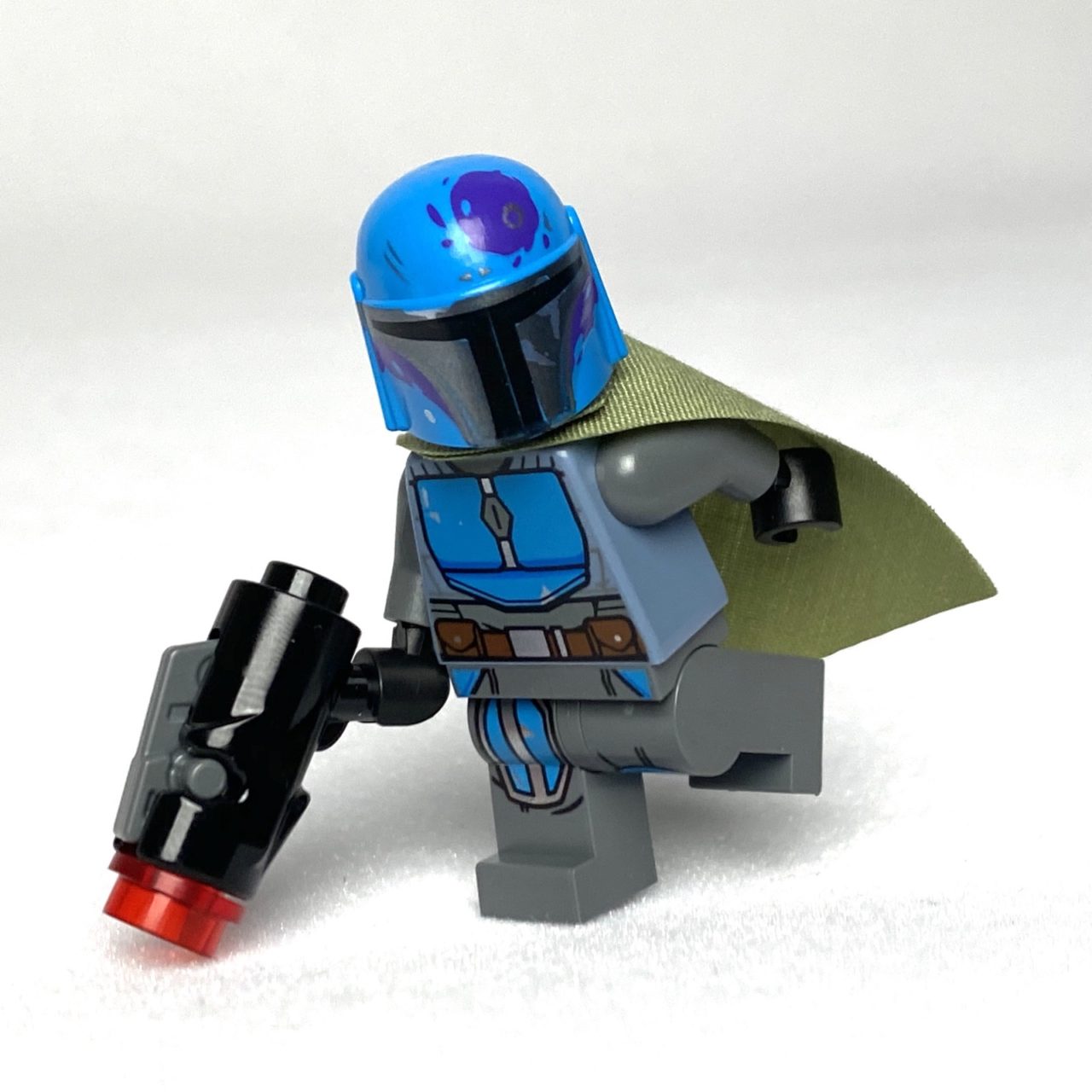 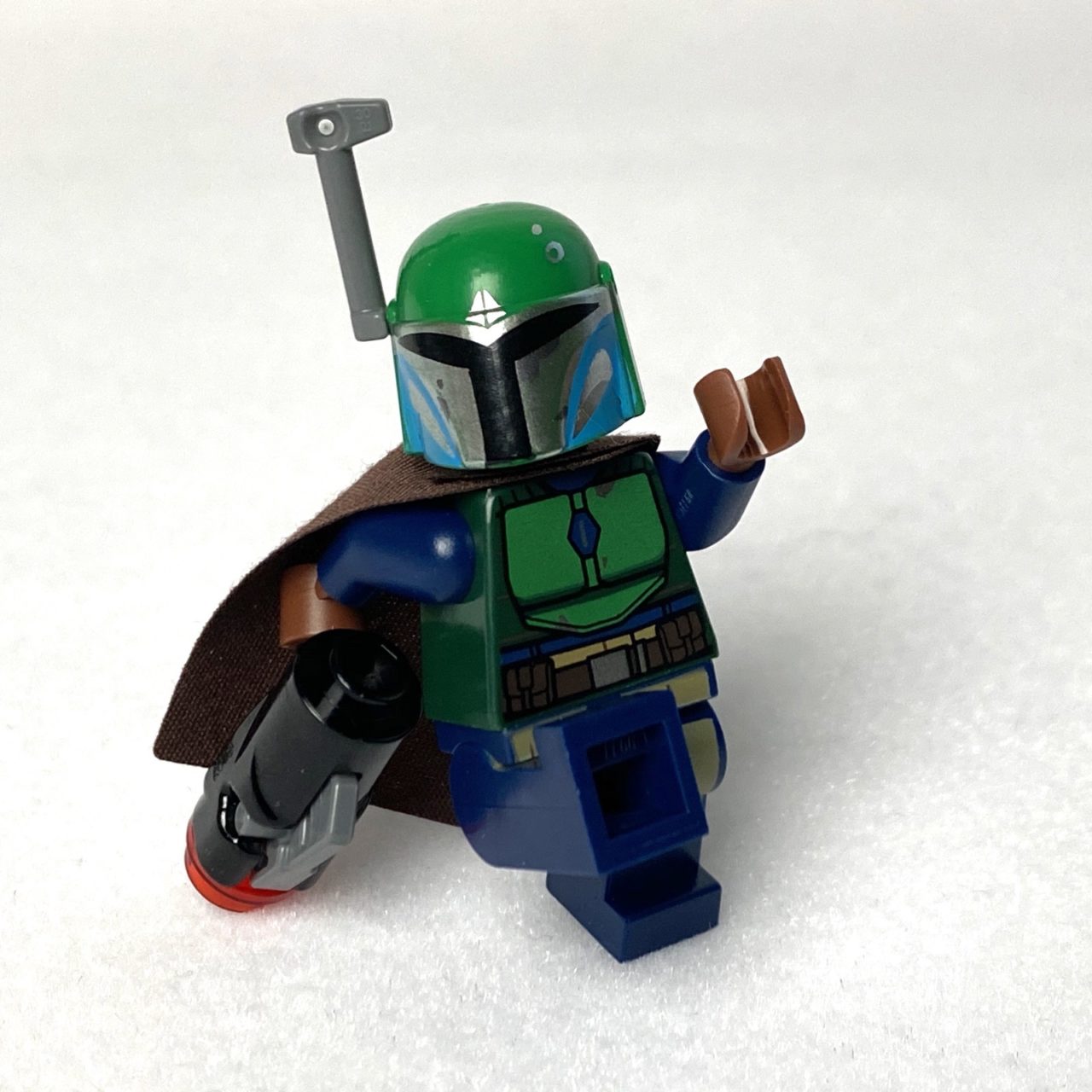 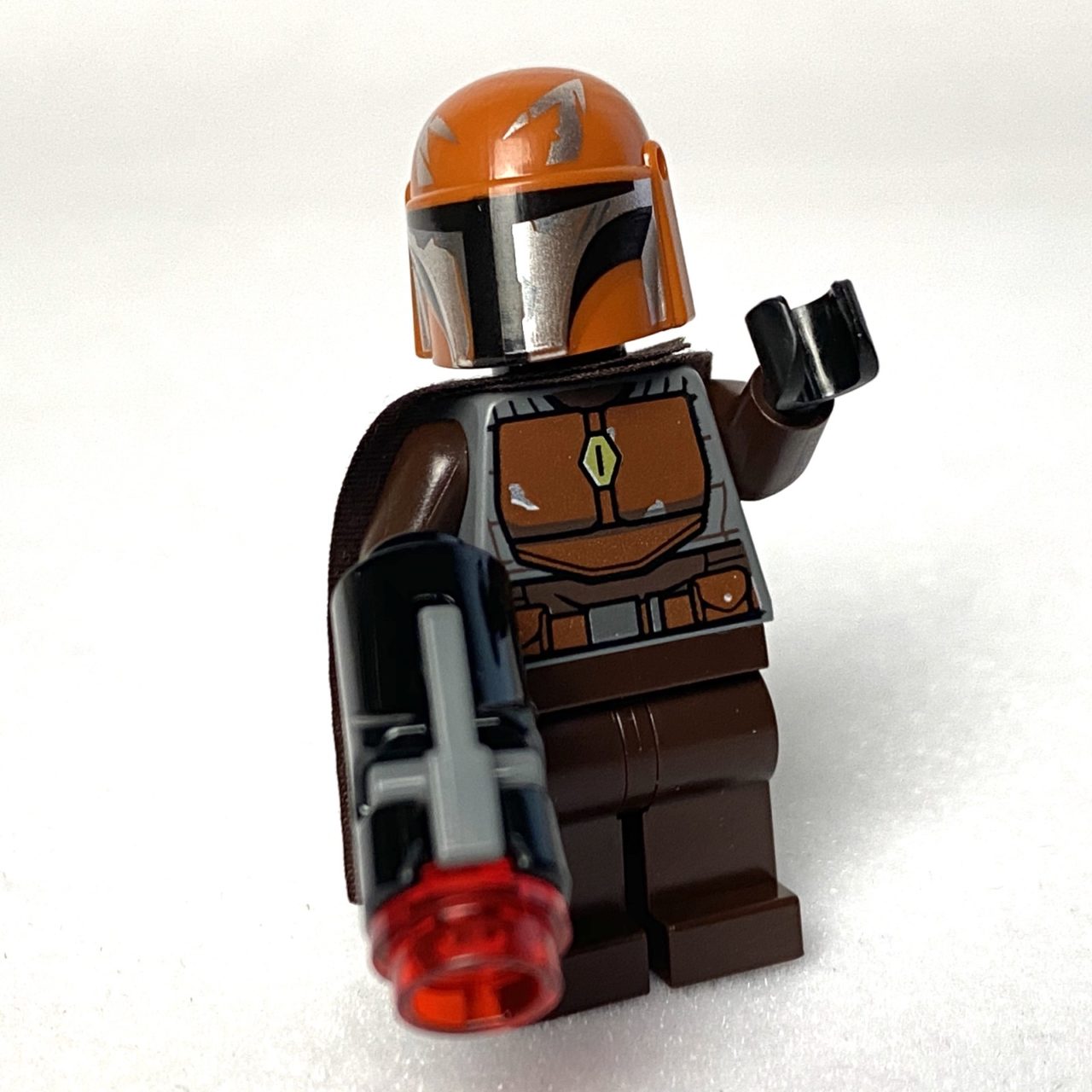 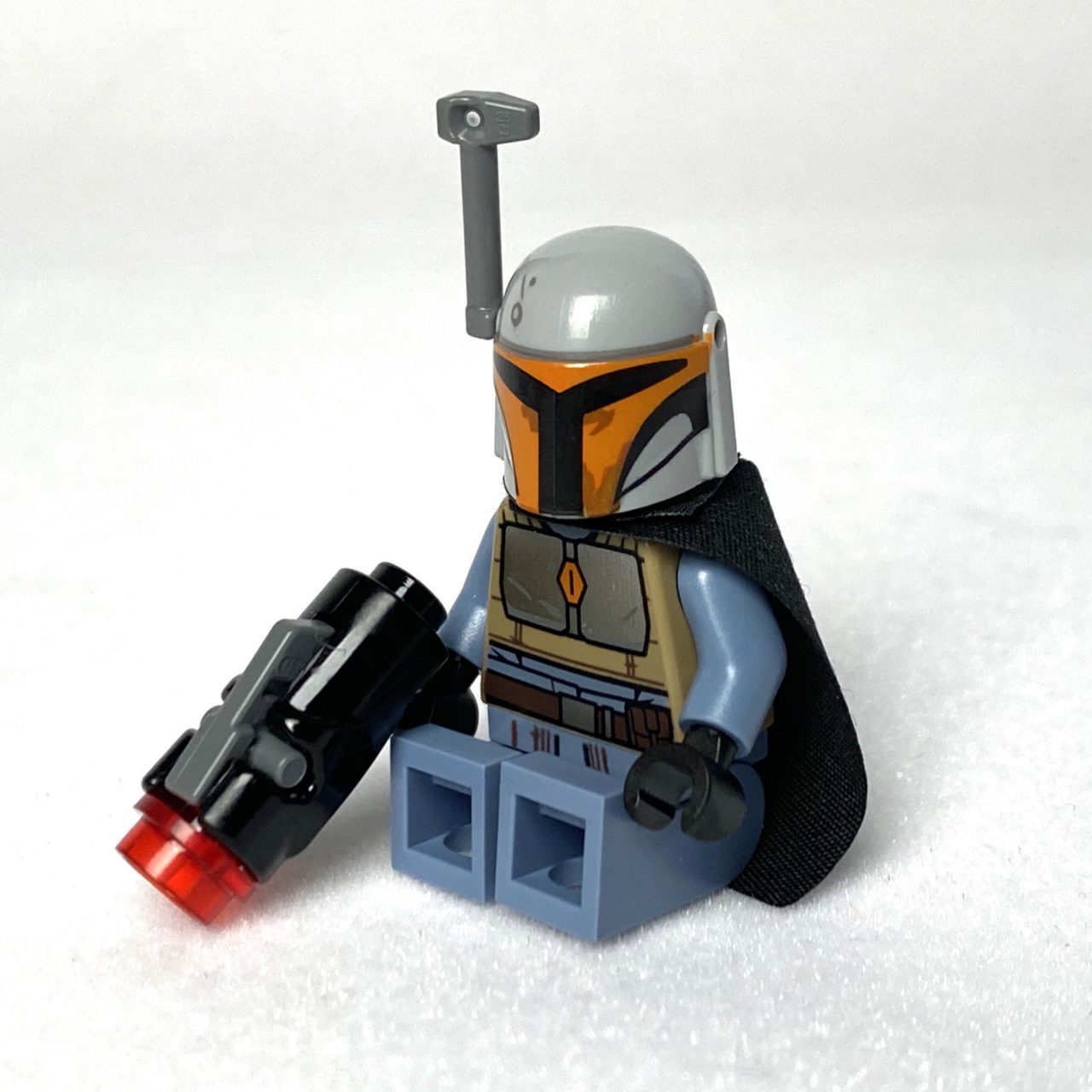 All the heads are blank black heads. The detailing is spot on without approaching the “too much” territory. A set of visors and range finders are also included. The instructions only show two range finders attached to Dolphins and Seahawks Mandos, but it’s nice they included the accessory bag to customize to your liking.

In addition to football themed Mando cosplayers, we get a speeder bike of some kind and a… checks LEGO.com… defense fort. 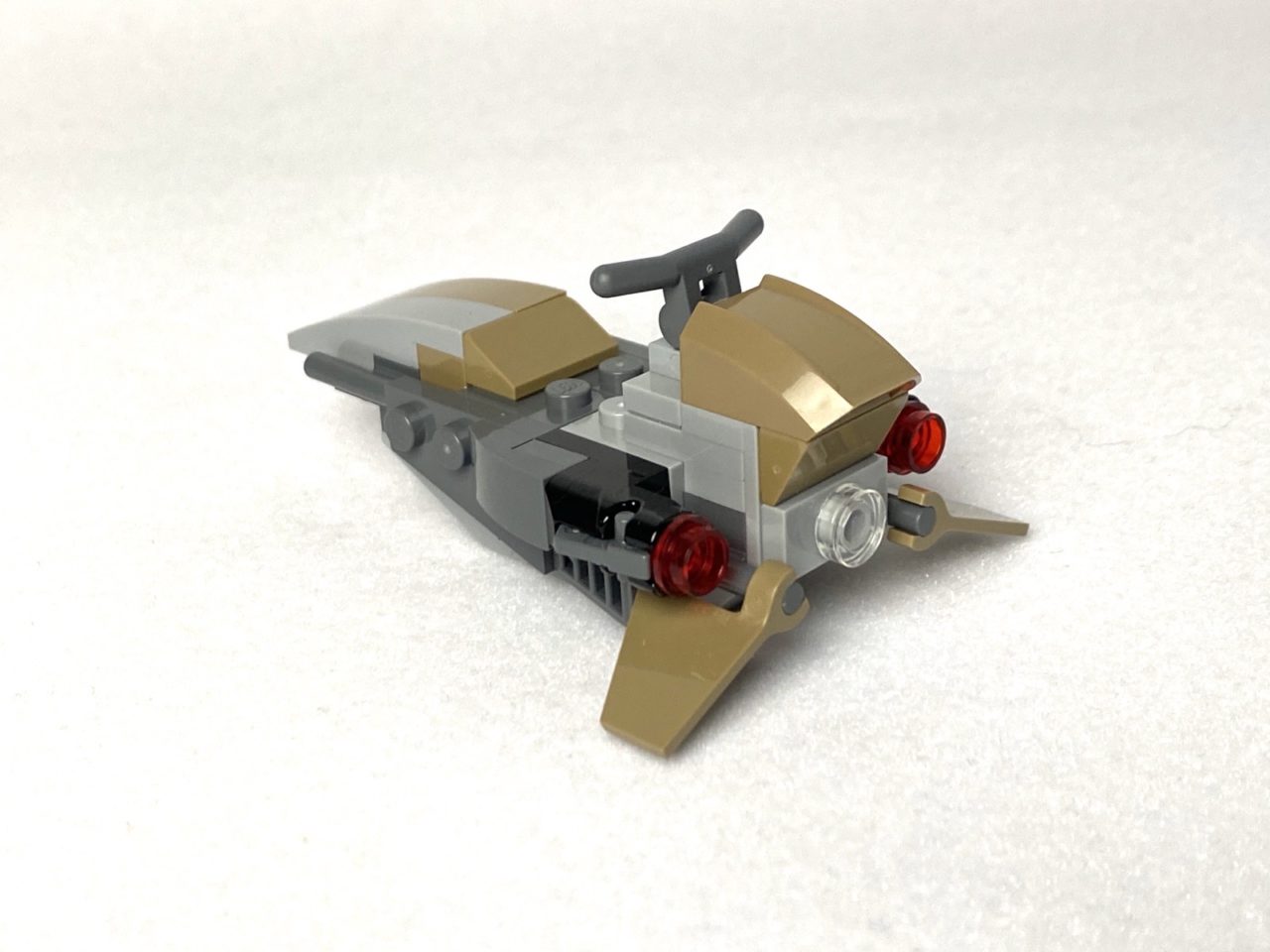 The speeder bike is a nice little build. it lacks any sort of clip or hollow stud so a Mandalorian’s gonna have to steer with one hand and shoot with the other. 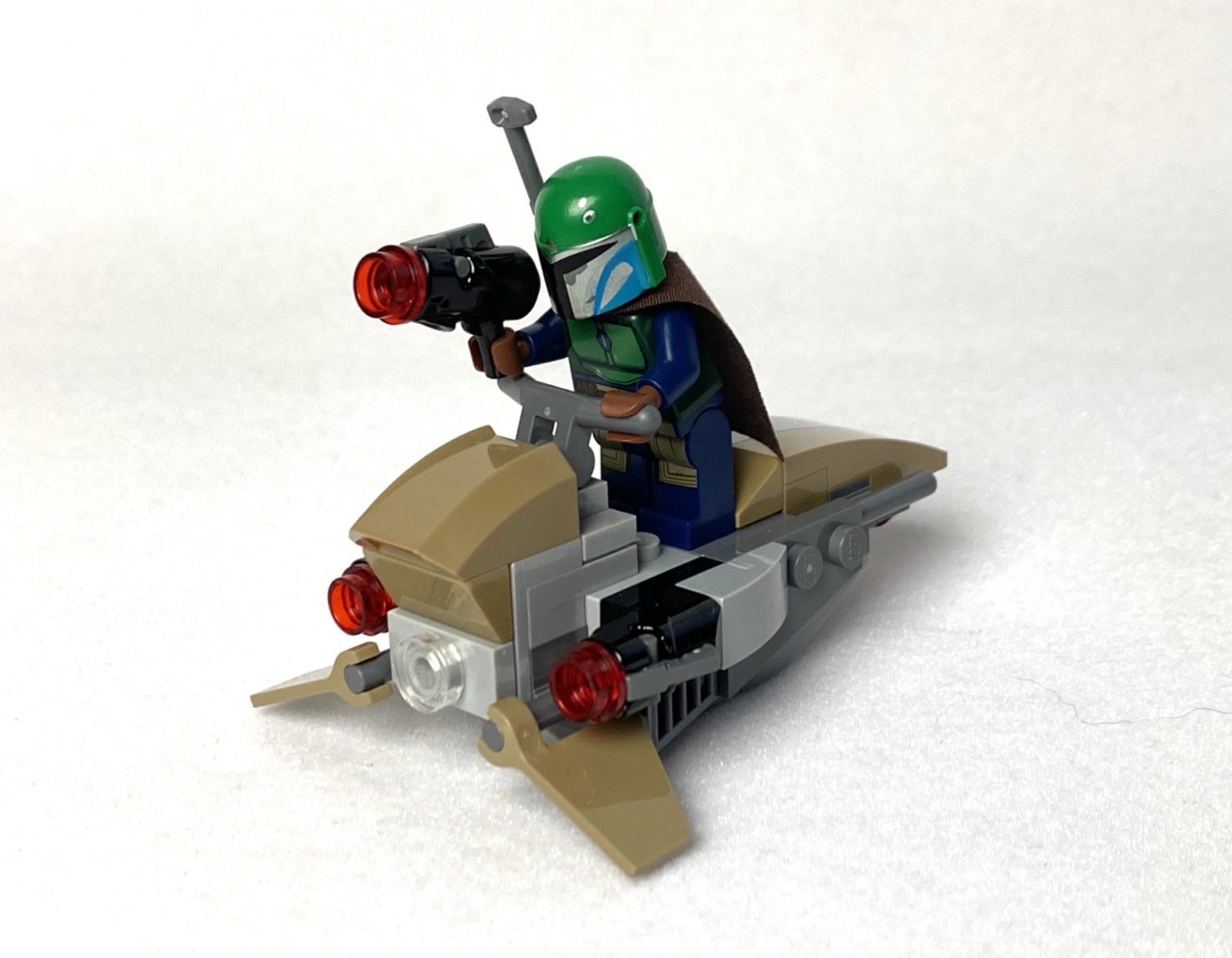 It gives the sports mascots something to vroom around in. It comes outfitted with two stud shooters. 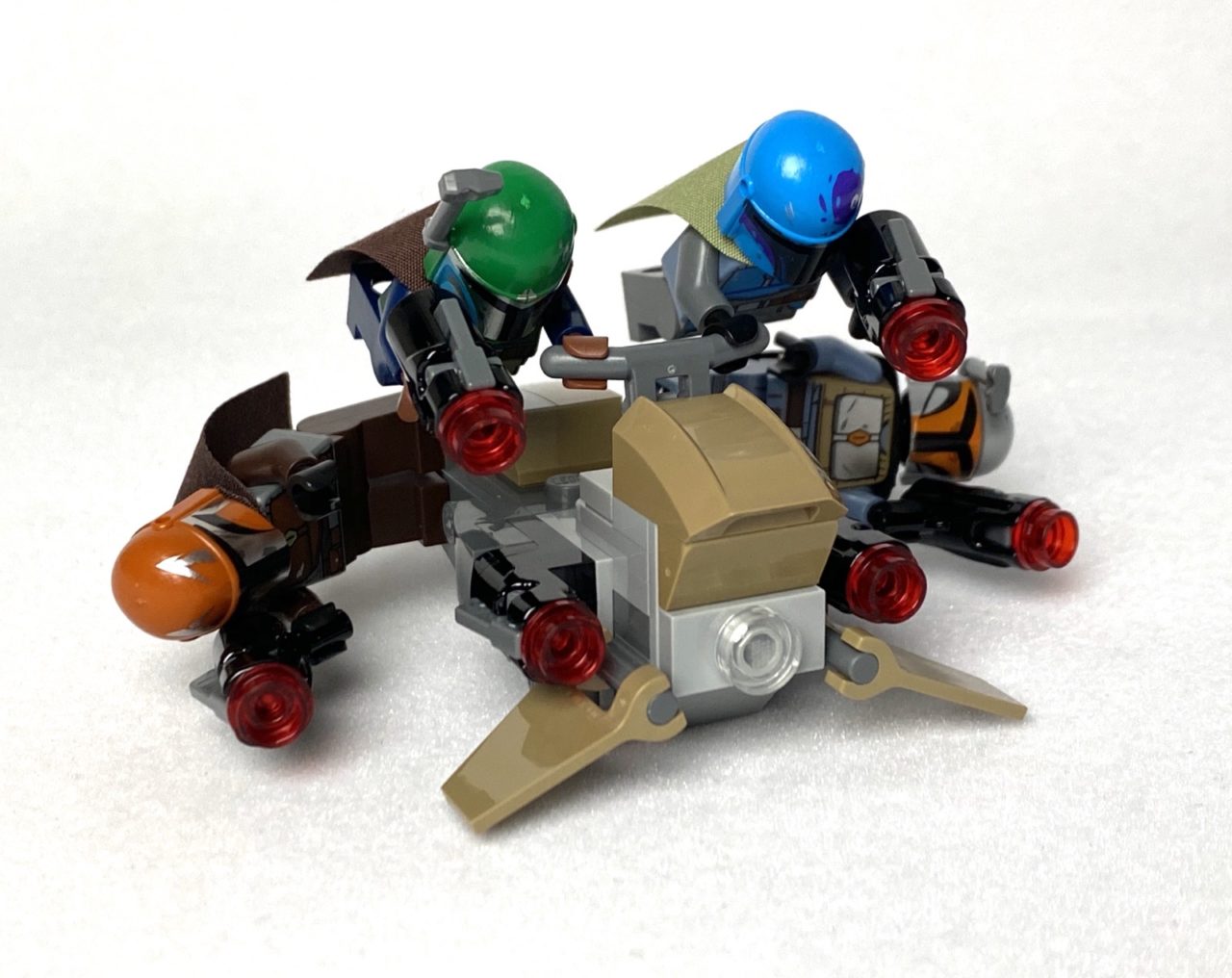 I think it’s awesome that it has room for four. 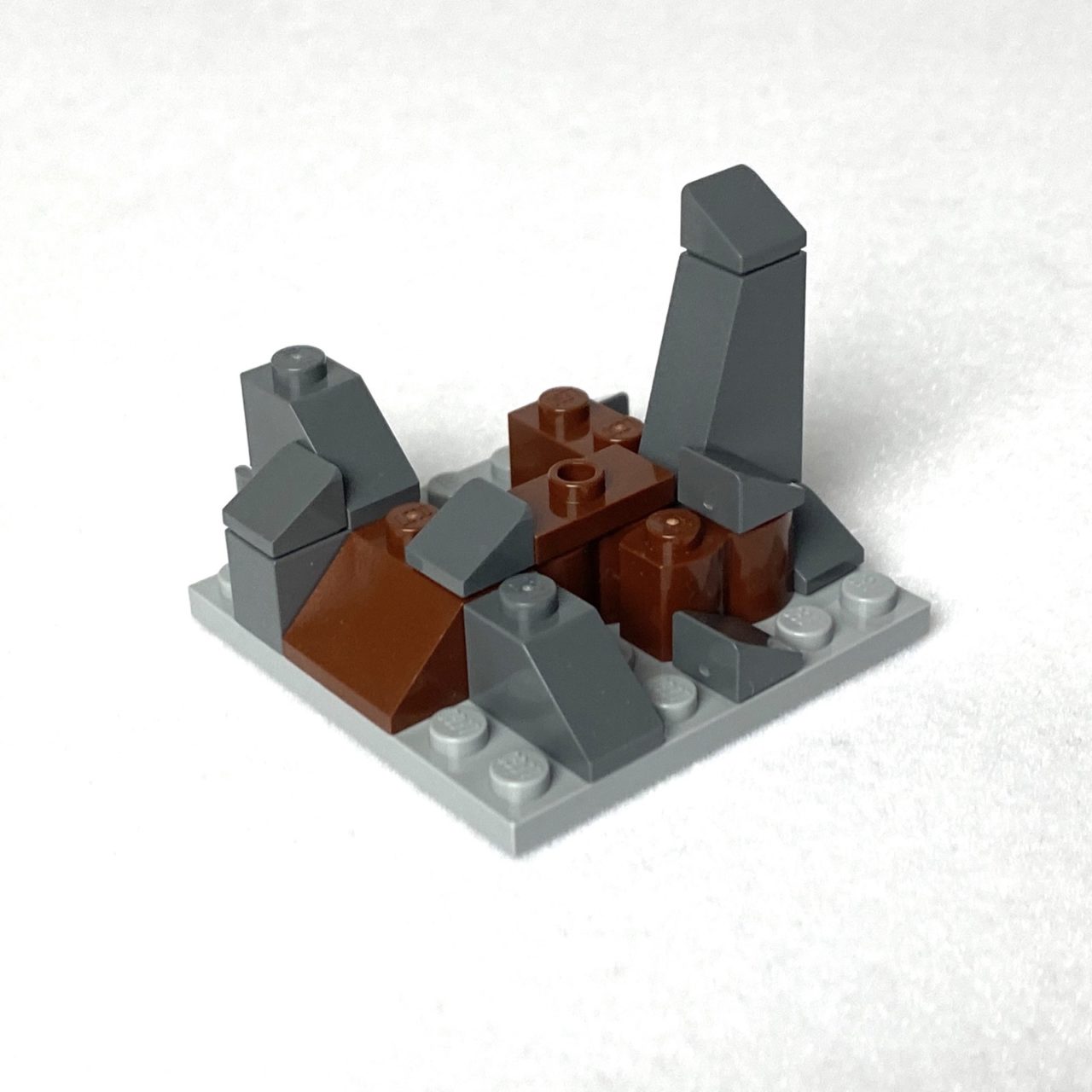 The defense fort is a complete waste of bricks though. I guess to really immerse yourself in the heat of battle, you’re supposed to put a Mando behind an embankment and then take the stud shooter out of his hand and place it in the hollow stud. Is it supposed to convert to a mounted weapon? 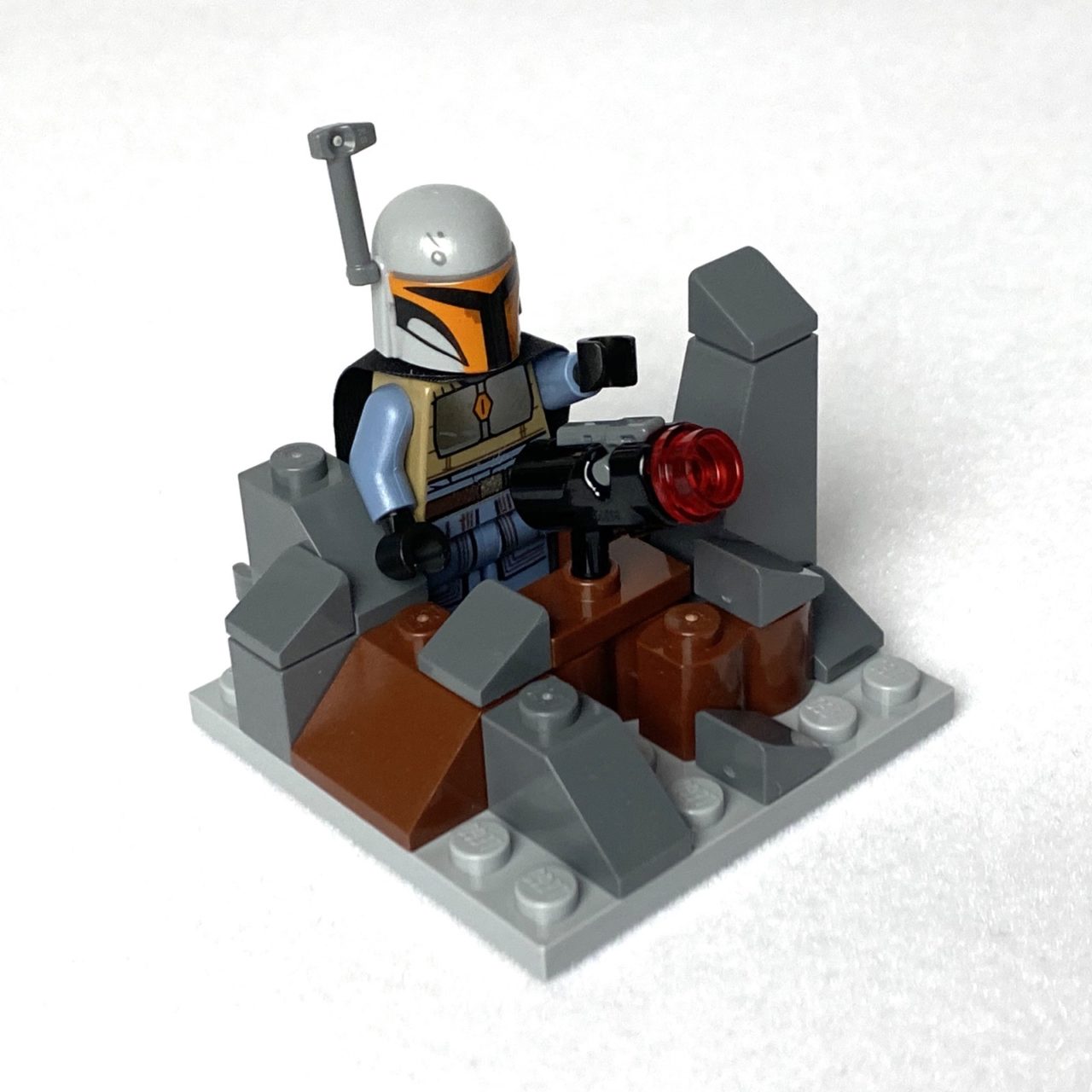 ‘Cause that’s now this works. But whatever, I really doubt anyone getting this set is going to come back to it after building it. It’ll get tossed right into the parts bin and forgotten forever.

This defense fort is made up of 18 elements, and to be honest, I’d rather have gotten fifth Mando instead of this thing. There’s nothing differentiating the Mandos from one another other than paint and cape color. The parts are exactly the same, they all have the exact same weapon, and the cut of the capes are exactly the same. A fifth Mando could not have costed much more than those 18 defense fort parts, could it?

Maybe it does. Or maybe LEGO didn’t want to start a trend of putting 5 minifigis in a battle pack instead of the usual 4. Had they not included this stupid little fort, the piece count would have dropped down to 84 pieces and LEGO might have felt like it would have been a hard sell. So stupid little fort got thrown in. 75267 Mandalorian Battle Pack would have been a successful product without it, though. Like I said, it’s tied to The Mandalorian, the one redeeming thing about being a Star Wars fan. And us Star Wars fans will buy just about anything good.

Final score? 4 out of 5 stars. The brightly-colored rainbow squad is a bit Power Ranger-y but it’s just fine for what it is. 75267 Mandalorian Battle Pack is worth getting if you’re a fan of Mandalorians, any of the four football teams they’re obviously fans of, or a fan of the show.

Regular price is $14.99. As of publication time, Amazon has a slight discount on this set, $13.47, a modest 10% discount but it’s enough to cover tax. If you click through and buy, FBTB will get a small commission. 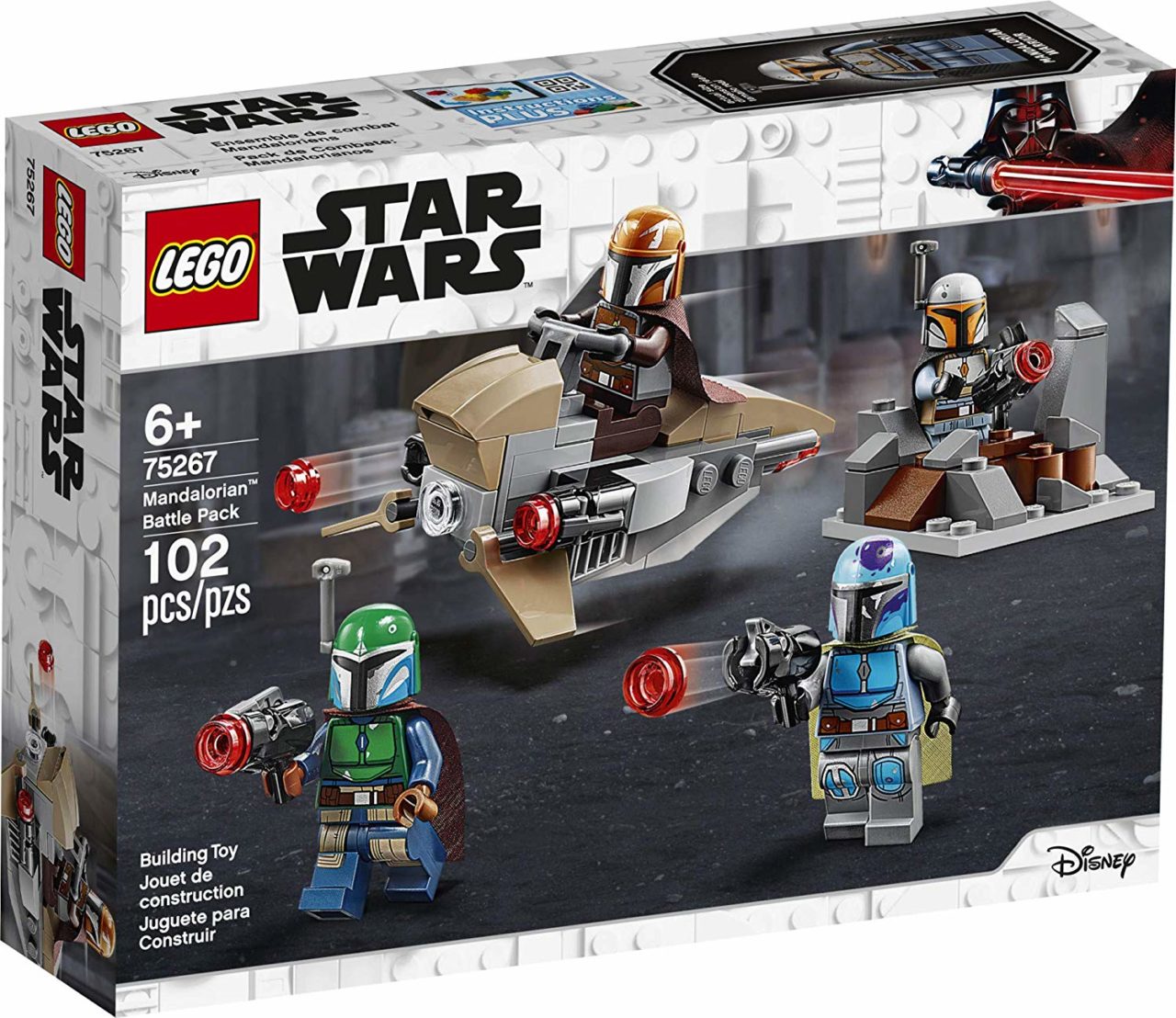 All of the 75267 Mandalorian Battle Pack Review Pictures

Yep. A sandwich sized one is all you need.

Want to win my review copy? Send an email to giveaways@fbtb.net with FANDO MANDO as the subject line. Standard giveaway rules apply. Y’all have a week to enter. Submission window is open from now until 11:59pm July 27th. Good luck!