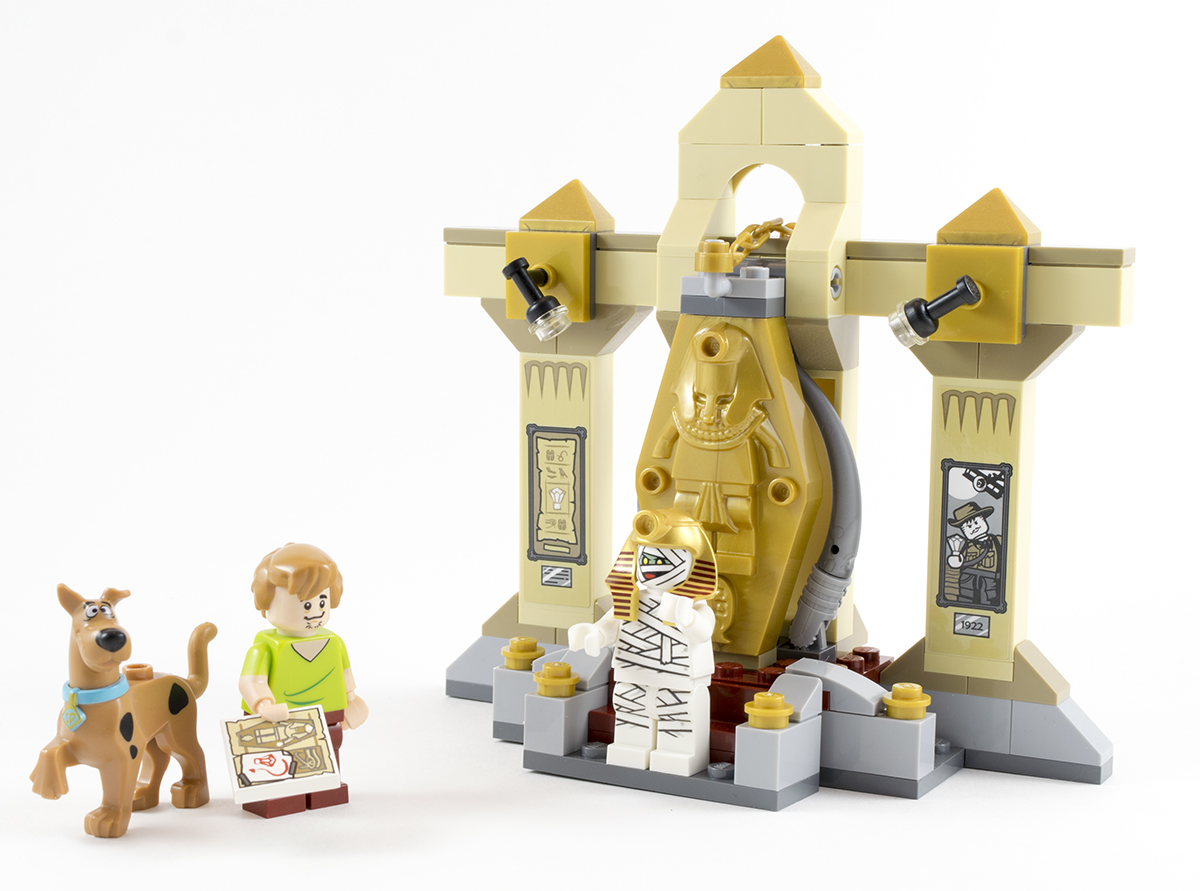 Given the contentious nature of stickers in LEGO sets, it’s always shocking when a set comes along that features a sticker set so awesome that it’s the real highlight of the set. There have been a few sets out there like that, 3221 LEGO City Truck, Hulk’s Helicarrier Breakout, and Rebel and Imperial stickers from the early Battle packs all come to mind. I wanted to review 75900 Mummy Museum Mystery because the stickers included had one of the more meta references ever in a set, the inclusion of Johnny Thunder, from LEGO Adventures fame.

It’s touches like that, along with the faithful adaptation of critical pieces of what made Scooby Doo so fantastic, that have made these sets pretty fun to build and review. I was pretty indifferent to this theme originally, and only wanted the mystery machine, but have really come around to it overall (even if it still stinks that I only get Velma in one set).

Of course, there is kind of a downer to this set, and that’s the $14.99 price tag for only 110 parts, in a size that would have typically been $12.99 in the past. On the surface, everything about this set seems to fit into the lower price; while it’s only $2, I don’t like the prospect of LEGO trying to kill off the $13 price point like they already have the $10 one… and this set strikes me as testing out doing just that. So we just need to ask ourselves if a Johnny Thunder sticker enough to forgive that every time I see one of these sets I start humming the Scooby Doo themesong to myself?

This is the third set I’ve reviewed for Scooby Doo, but was actually the first one that I built. That’s one of the wonders of the internet and laziness… how it shows up here isn’t always how it worked out. Seriously, I have some reviews that I’ve been trying to get finished for months, or occasionally do something insane like crank out the Ewok Village review in two days. I will say that this is a very good set to get you hooked though, because it hits so many “feels like Scooby” notes.

We get three minifigs, well, two if you don’t include Scooby (he, like battle droids, brick-built stuff, and bigfigs don’t get included in the official minifig count). But I always include Scooby, because I love Scooby. We also get a Shaggy with his plate / piece of paper (no word on if it’s rollable), and the mummy that presumably makes up the mystery. 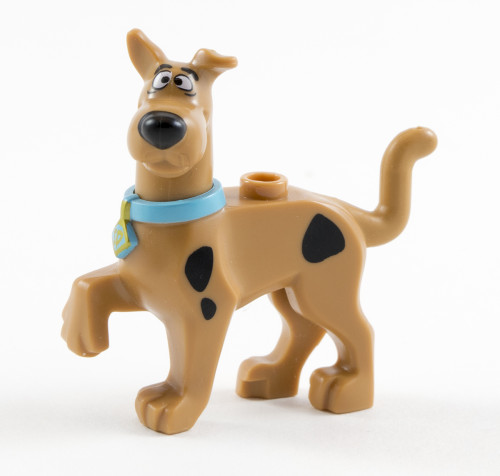 Scooby, as I mentioned in the other two sets, is really two parts that get mixed together. This is the standing version with a regular head, which is probably my favorite head. I prefer the sitting version… this is a lazy dog unless there’s food involved, but the great thing is that you can easily mix and match Scooby into the version you prefer. You get each variety of body and head in the three cheapest sets as well, which is a nice bonus. 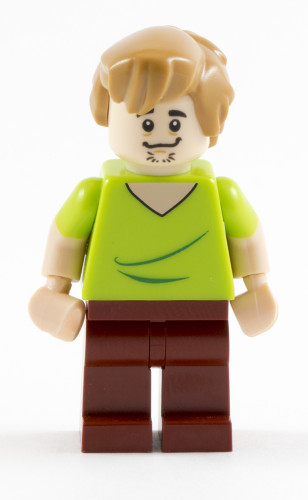 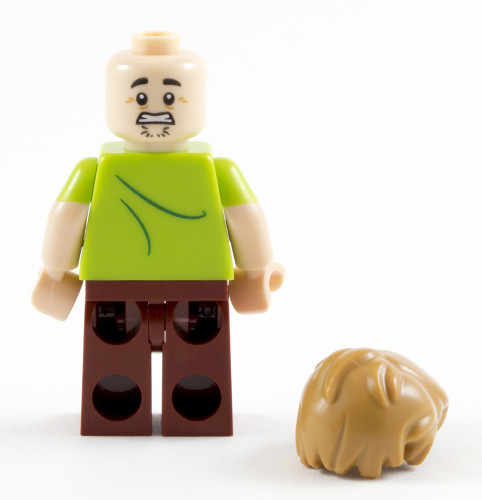 Not much to add on Shaggy here. He looks fine as a figure, but the only difference between them in the head, and that’s just one of the expressions on the head. The smirk one is still the best, but it’s hard to convey slouching in the minifigure form, and that’s really the only other expression that Shaggy has in the cartoon. 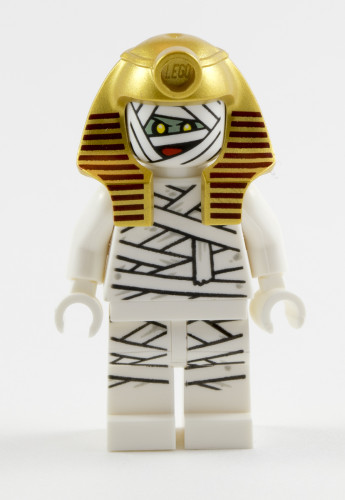 The bad guy in the set is a pretty standard LEGO mummy. The pattern for this guy was last seen in the Monster Hunter line… mostly, as there is an alt-face, and the headdress is a variety of the CMF pharaoh figure (and then reused in Pharaoh’s Quest, which didn’t feature Johnny Thunder and only had one Pharaoh) . I’d like to think that this mummy was originally just the CMF, preserved and prepared after his death to scareÂ Abbot and Costello. 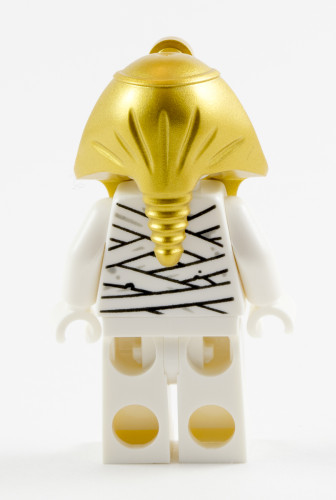 Also, Woflman. The headdress is in metallic gold, which is nice, and just overall is a pretty nice part. Of course, the mummy looks pretty standard, unless you were the one to put him together or you take off the hat… 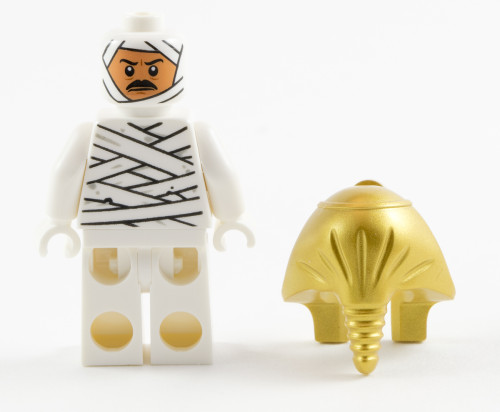 In which case you reveal that this is really just a the guy behind the mask. Right here is the most “Scooby Doo” part of these sets, and it is awesome. This figure, which isn’t really reusable at all, and not even all that practical unless you’re making some sort of halloween display, got me from “I want a Mystery Machine” to “I’m probably going to buy all of these sets” with the Scooby Doo line. 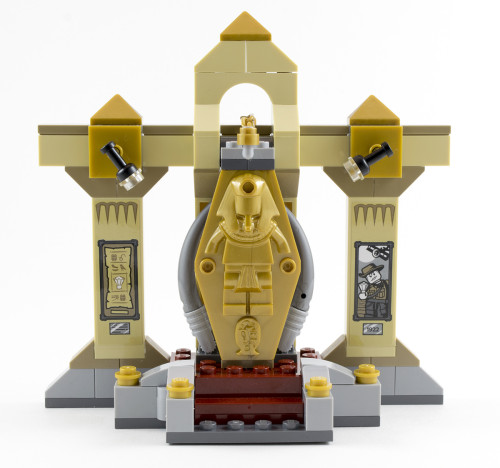 The set itself is pretty basic, but what I do like about it is that this really is a museum mystery, and not Scooby and Shaggy raiding a tomb and desecrating the dead or something. It’s not that flashy of a set, but there are some obvious standouts that you see, like the sarcophagus lid, the dark red, or the 2×2 jumpers in pearl gold. 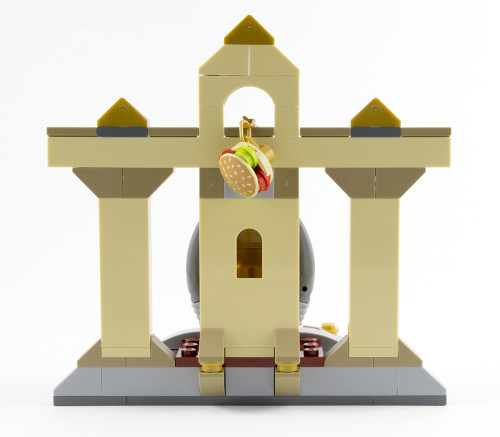 The back is pretty… nothing. It only features a sandwich on a chain to open and close a tomb. When I built the set, I remarked in chat that it was probably the dumbest feature I’d ever seen in a LEGO set, but that was before I put together the 75901 Mystery Plane Adventure. That being said, outside that chain, at least this set makes a lot more sense than the biplane. 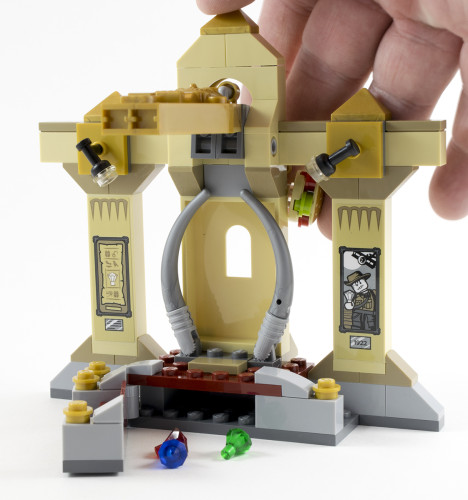 The chain is there for a couple of features, mostly to lift the lid. Of course, the lid is more about hiding the false opening, which has some gems hidden. I’m pretty sure I saw that movie before, and it didn’t work out so well for Ben Murphy or anyone else who touched the gems. The back of the sarcophagus is fairly disappointing… I wish it would have had a back or interior like the Pharaoh Quest or Monster Hunter stuff typically featured.

I’m not exactly sure how time works in the LEGO universe, but the picture implication above is that Johnny is from the roaring 20s, which means he predated Indy by a decade or two, but apparently also starred in North by Northwest, which was in the 50s. He was also seen hanging out in the Dog in the LEGO movie, which means he’s still around and looks the same. I can only come to the conclusion that Johnny Thunder is actually a Highlander.

That doesn’t explain why he hid the jewel in the museum display to wait until the 70s when Scooby and Shaggy happened to be visiting the display to look for a sandwich. Unless he’s actually the mummy, and just buried himself to be put on display, rescued by Ben Murphy, and the discovered by Shaggy looking for a structurally important sandwich… we might be through the looking glass here, people.

That or it’s just a fun little meta set with in-jokes for LEGO fans. Really, this was a great Scooby Doo set, a good gateway to wanting more from the line… and not as great of a price. This is every inch a $13 set, and a good one at that, which gives you some basic figures, good stickers, and decent parts. I’m going to ding it a point for being $14.99, but it still stands as a goodÂ four out of five. You don’t have to like the price, but it’s hard not to like the set.

Verdict: 4 out of 5. Better yet, at the time of this writing, you can get 75900 Mummy Museum Mystery at the price point it should have been, under $13, at Amazon.com. 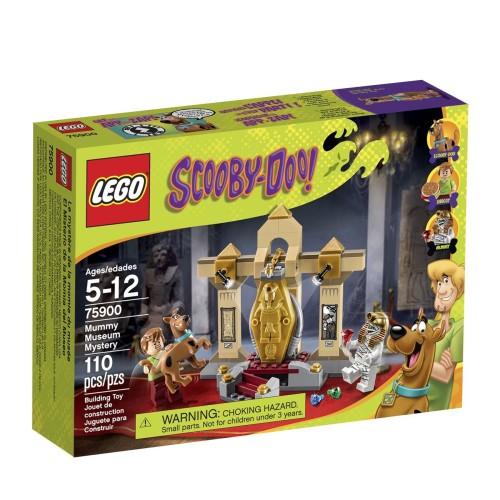