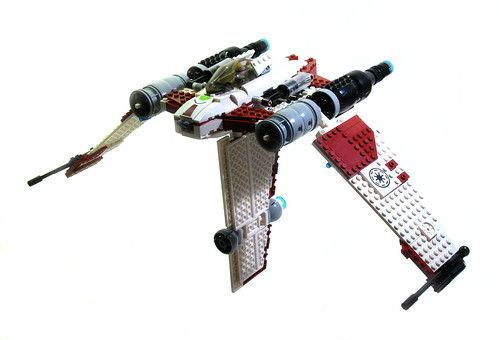 Ah, the V-19… one of the more old school looking ships to come from the prequel trilogy. Folding wings, big engines, what’s not to like?

Turns out, a lot actually. It’s no secret I’m a bigger fan of theÂ  original trilogy and by correlation the ships from that era, although the Naboo Starfighter has a certain sleekness I can’t ignore, so pitting the V-19 Torrent against the mess of droid fighters, Jedi starships, Republic Gunships and the V-wing puts it easily ahead of it’s Clone Wars siblings. So why the tone of disappointment? Read on.

First lets talk value. For $54.99 you get 471 parts. That works out to almost 12 cents a brick. Everyone knows that the 10 cents per brick rule of thumb is slipping, so it’s not excessively high for a licensed set. But consider the variety of the parts included. Lots of large plates and wings/wedges mixed in with an unusually large number of Technic elements, with a bit of Bionicle tossed in to keep you on your toes. I’m of the camp that thinks no part is a useless part, but I still get the feeling this lot isn’t as alt-model friendly as a more unified pallet would allow. Also, as a result of the two sort of incongruous sets of ingredients, the build was a mix of enjoyment and confusion.

Right from the start I knew it wasn’t your typical system construction. The pilots seat seems to be able to tilt forward and back, a neat feature I thought at first, then the next step is to fix it in place. What a tease! My pilots like to recline! I guess that’s only in the luxury edition V-19s though. And it just gets stranger from there. 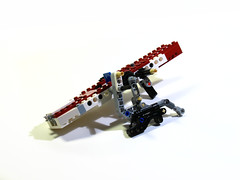 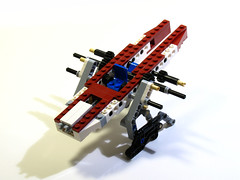 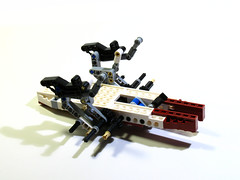 As I began assembling the mass of intertwining beams and axles, I was pretty happy about it. I grew up building both system and Technic sets, so I thought I was in for a treat having them melded into one. But as it went together something felt wrong. There was no cohesion. The parts get the job done but they don’t do it very well. Note how the unfinished model stands at a tilt? Surely they would remedy this by build’s end right? They couldn’t possibly just leave the jumble of beams exposed and call it landing gear could they? No, that’s ridiculous. They’ve got to have something in store to make it look good. 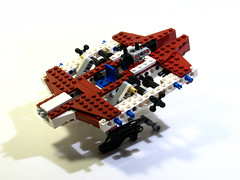 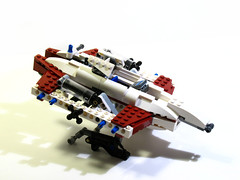 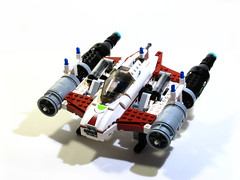 Haha, psych! That’s exactly what their plan was. At this point I was pretty disappointed. Not only was the body sitting on some oversized and unfinished looking chunk of plastic – but it was still leaning forward! I went back and built it again to make sure I lined up all the pegs right, but same result. On the bright side at least, the effect of the landing gear seemed to work alright, and I do so love it when the wings all move in unison like they should. So I finished it off with forced though cautious optimism. 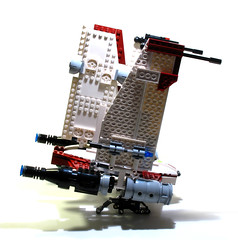 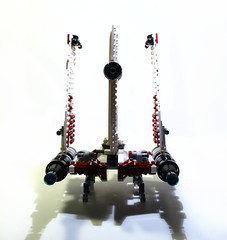 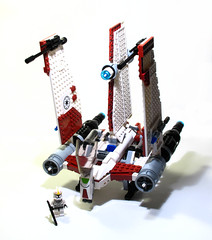 So there it is. Aside from the tilt and ugly “landing gear” it’s not so bad… A few gaps where you’d rather not see them, but that’s to be expected with an official set. Overall it matches the ship I remember for the Clone Wars cartoons, and it’s a pretty impressive size once it’s completed. Bigger than I expected in fact. Almost too big to fit my photo setup. 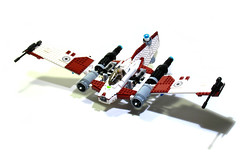 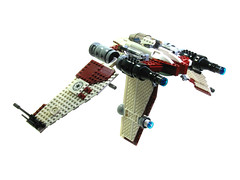 So, of course, once you have something like this in hand, and you let the wings slide down, it’s time for some swooshin! But be careful: you learn pretty quick with the set that bigger isn’t always better. The wings, though impressive, feel dangerously flimsy when you try any of the fun maneuvers. The inability to lock the s-foils in attack position makes loops and rolls fairly impossible, and with any light bobbing motion (you know, like what happens when you walk?) the Torrent starts doing it’s impression of a seagull taking off. The 4-knob gear things that link the motion of the wings together isn’t the tightest mesh, and plastic axles flex by their very nature – so there’s just too much torque for the parts to handle. I haven’t managed to break mine yet, but I fully expect to. Maybe I should have. Just dropped it… you know, to see how it held up? For science! I’m sure my cat would love helping my find all the parts that are bound to scatter when it hits the floor.

Oh, and speaking of cats, this has flick fire missiles! And they work as great as ever – meaning not very well. If you really want to give your pets and siblings something to run from, you need the spring loaded plunger thing. Pity the Rogue Shadow is the only Star Wars set in recent years to feature it. Those are pretty much wasted space, but apparently kids love em in the focus groups so they’re here to stay.

Now, the last thing on my list is the minifig. 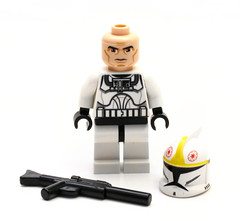 The lonely, sad, ugly Clone Pilot. I know this is a starfighter and it doesn’t have room for a passenger… but I’m a big fan of minifigs – and for a $55 set to come with a single non-unique minifigure – well that’s just kind of a let down. I’m trying hard not to dock the figure itself for being the hideous animated style, so I’ll break it down to the good parts. Yes, there is a minifigure, so you get a point for that. Wasn’t that easy? And it’s a fitting figure: a pilot for a fighter; so there’s another easy point. Plus they armed him, somewhat needlessly, but I’ll give a third point for including the gun. And I think I’ll actually give one more to him, since it must be hard being so ugly. Your life is bad enough as it is, ugly clone pilot, I won’t make it any harder than I have to.

All in all, I wanted to like this set. I really did. I like the V-19, and I hoped that this could be as good as the latest X-Wing and Y-wing sets we’ve gotten. I know the designers are up to the task… but this managed to fall short. Maybe my bias against the Clone Wars in general is clouding my judgment. Surely if you like the animated style figures you’d rank him higher, and make the build will feel a bit more sturdy to you. For me, however, I simply was not impressed. I should go pick up one of those new OT playsets to quell my dissatisfaction.