The above video was published on Nintendo’s YouTube channel giving the world a sneak peek into what the upcoming LEGO Super Mario theme will look like. I don’t know what I was expecting, but it wasn’t this. Let’s break down what the video shows us.

Mario Is Gigantic and For Good Reasons 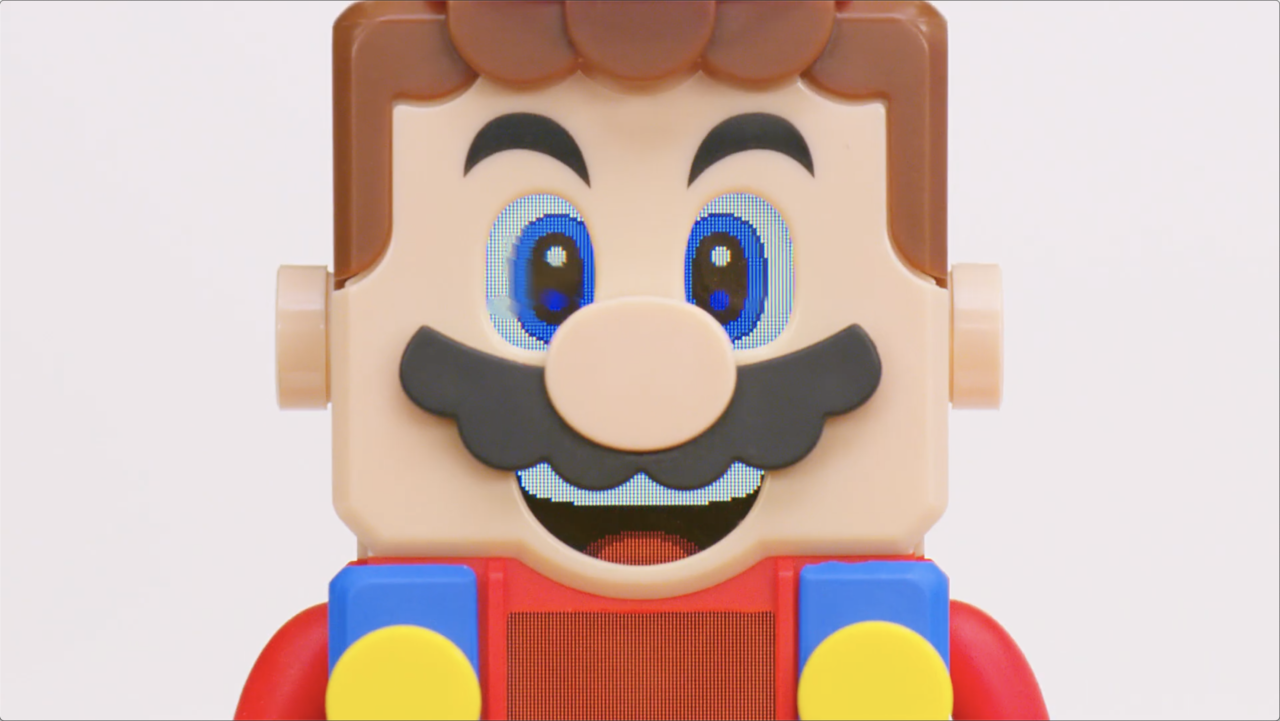 He’s an electronic toy complete with LCD screens for the eyes, mouth, and chest.Â  Though it’s probably one LCD screen with specific zones, like how they made the 2DS with one screen.

He’s battery operated and bluetooth enabled. You can also see a small grill on the back of the head for the speaker. 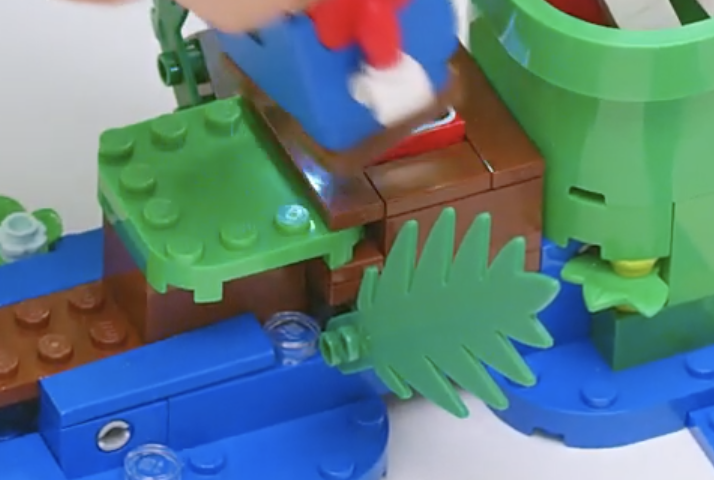 He’s got a camera up his butt and a little LED light. You can see the LED light reflecting off of the plates above. 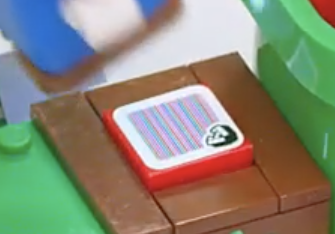 The camera can scan bar code tiles. I’m 99% sure that’s a sticker. The barcode is identifiable to the interactive element by the icon on the top right corner. This one is for the Piranha Plant.Â  The camera also detect colored plates so Mario can react accordingly. 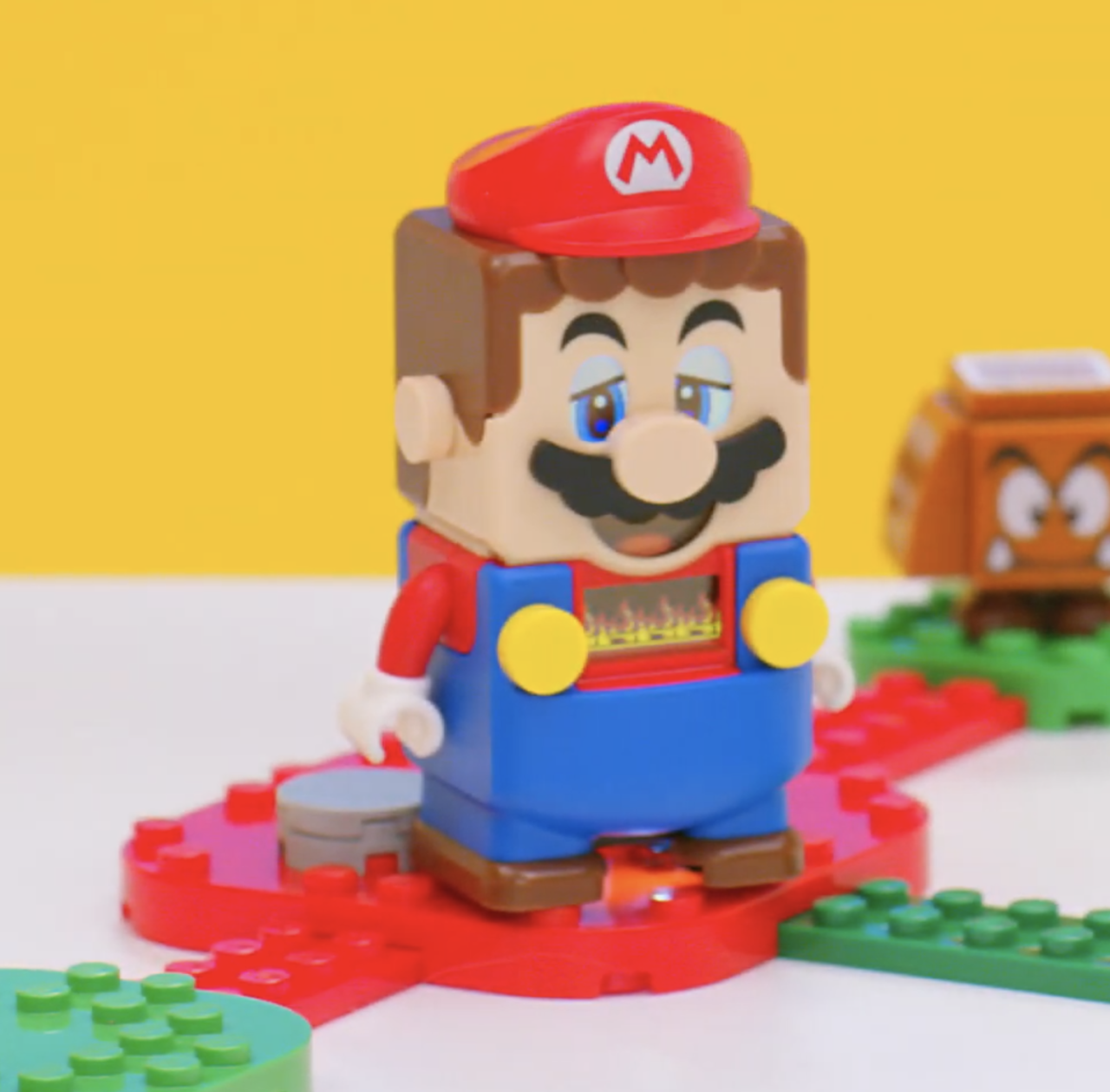 Here’s he’s placed on some red tile and Mario throws up a lava icon on his chest, distressed eyes, and plays sound effects.

The video also gives us a preview of some of the denizens of Mushroom Kingdom. 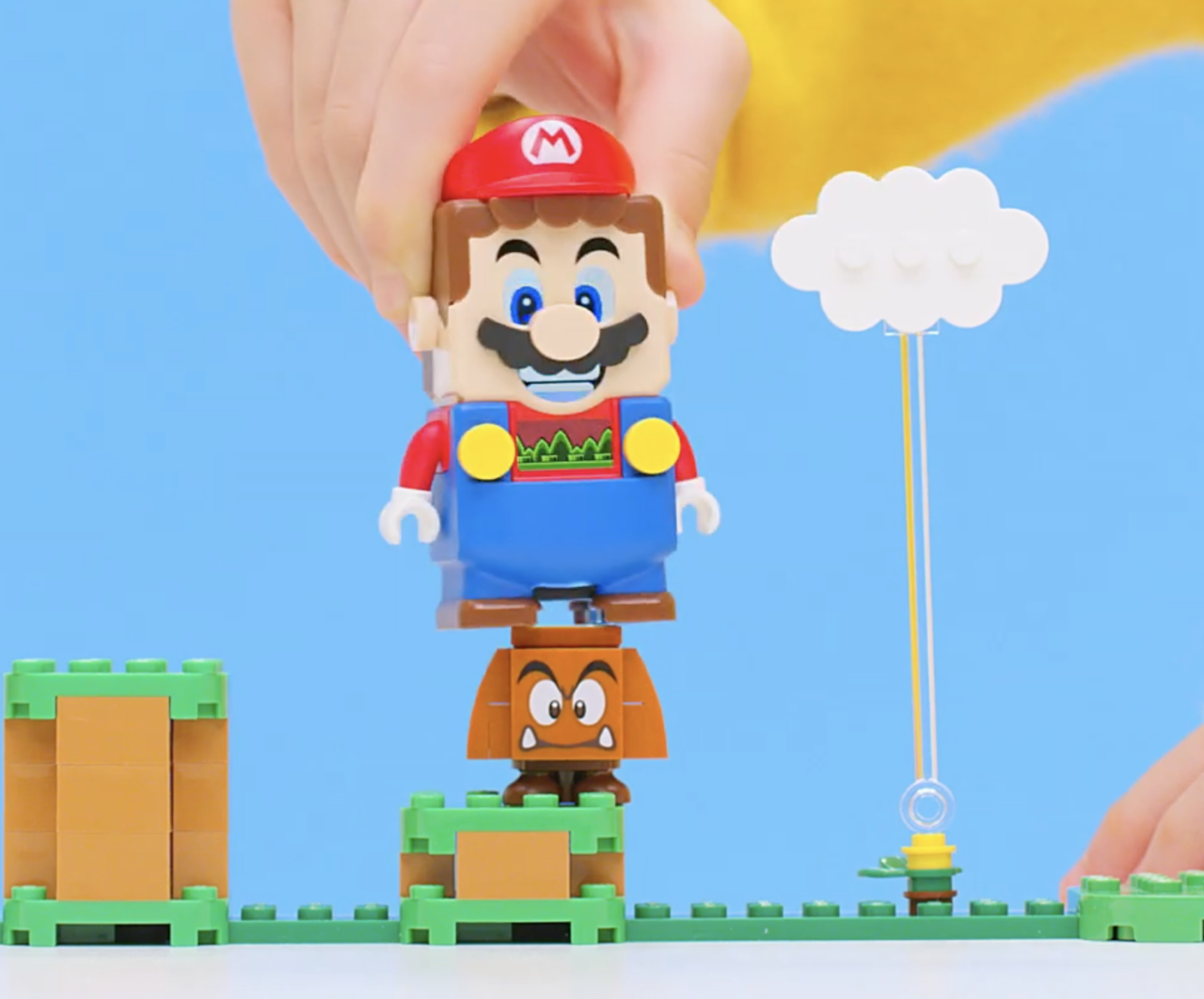 Here’s a Goomba. Based on the way it looks, I’m gonna guess the face is a printed element. The feet look to be a unique mold. That cloud tile element is also new as far as I can tell. 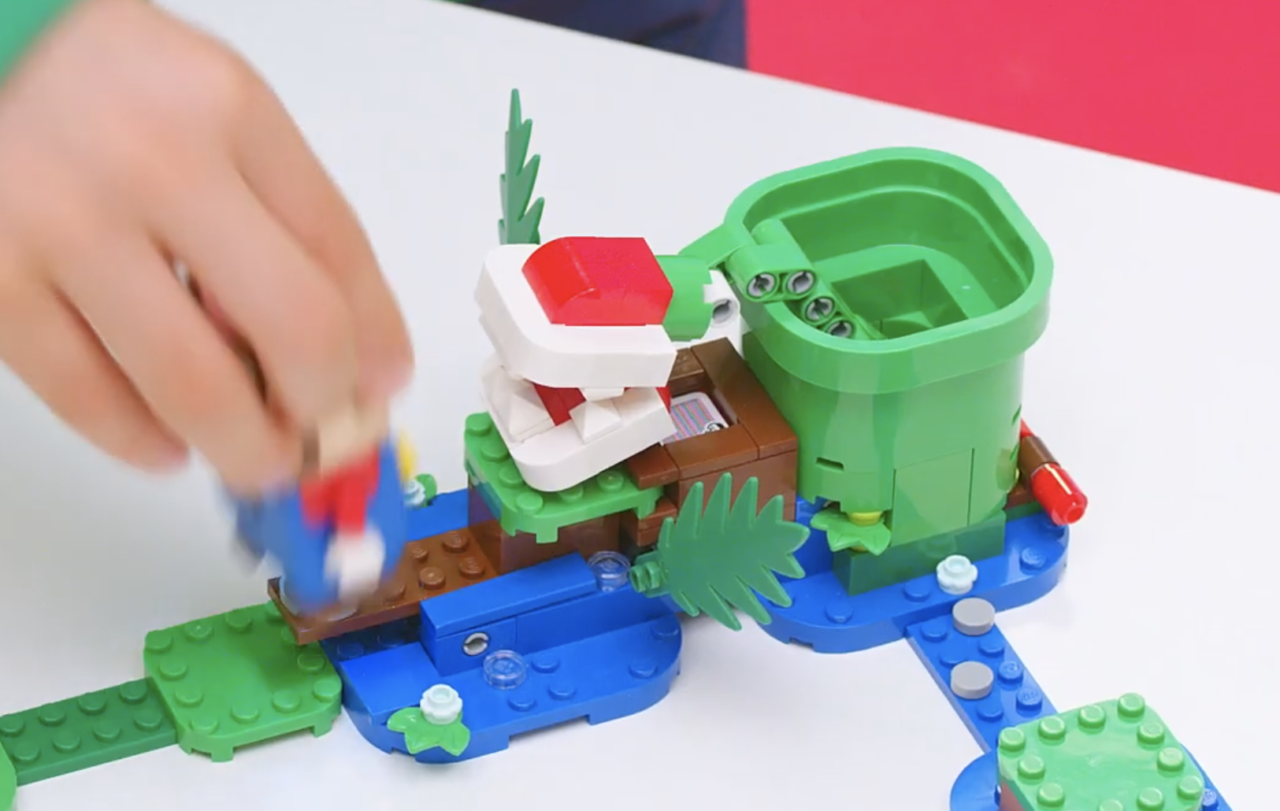 Piranha Plant sticking out of a pipe. You get a good look at the inside of the single-piece pipe element. 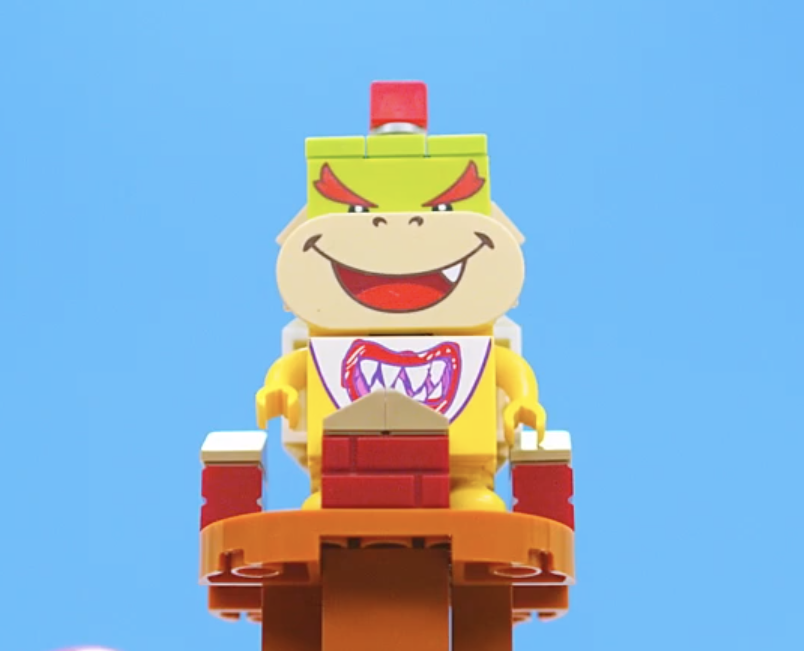 Like the Goomba, Bowser Jr. looks to be sporting more printed elements. The mouth is particularly interesting as it appears to be on a 2×4 tile with rounded corners. Here’s another view of Bowser Jr. on his side: 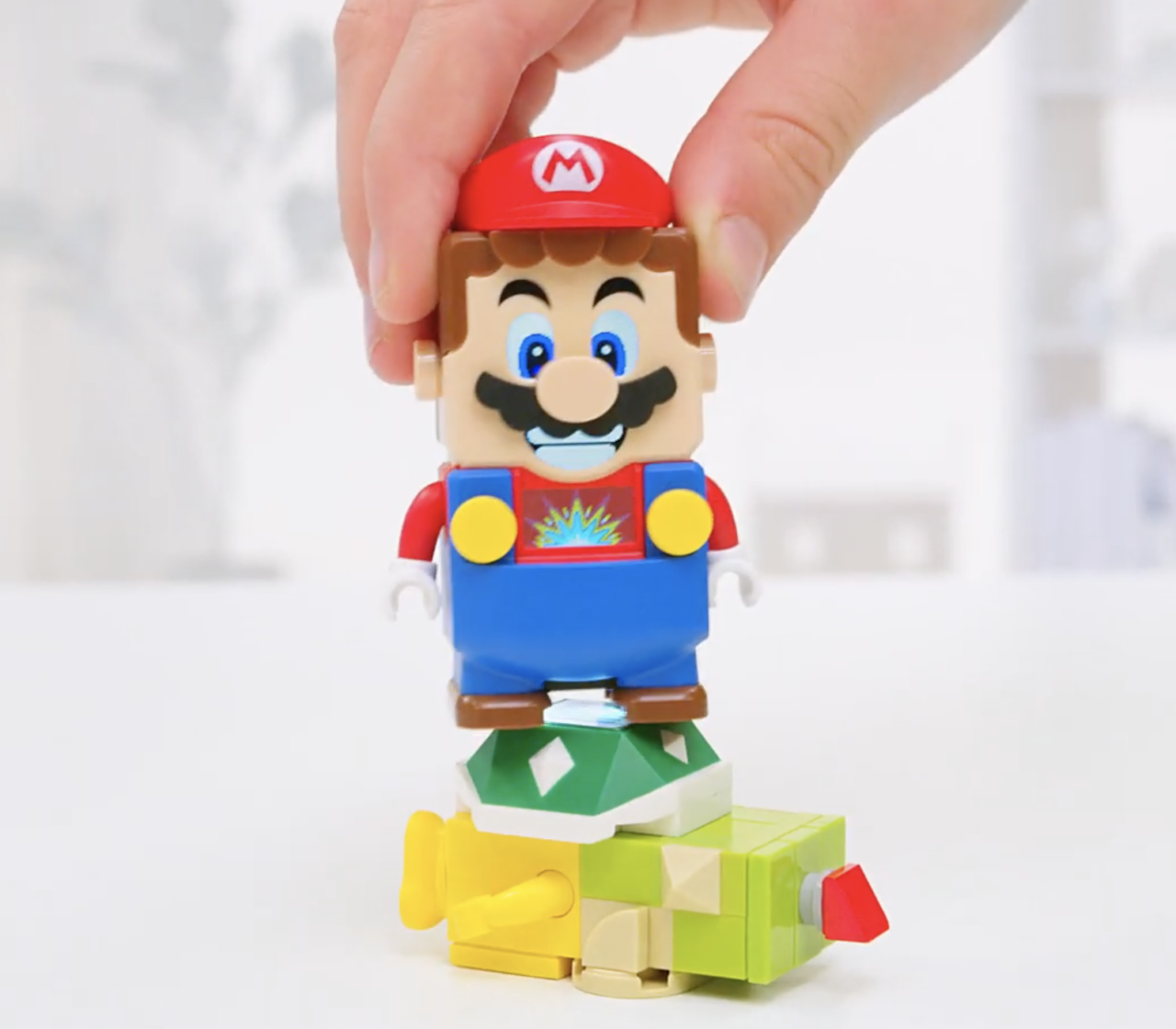 You can also see the custom shell element. There’s a barcode sticker on the back so when you stop on him with Mario, Mario animates and plays sound. 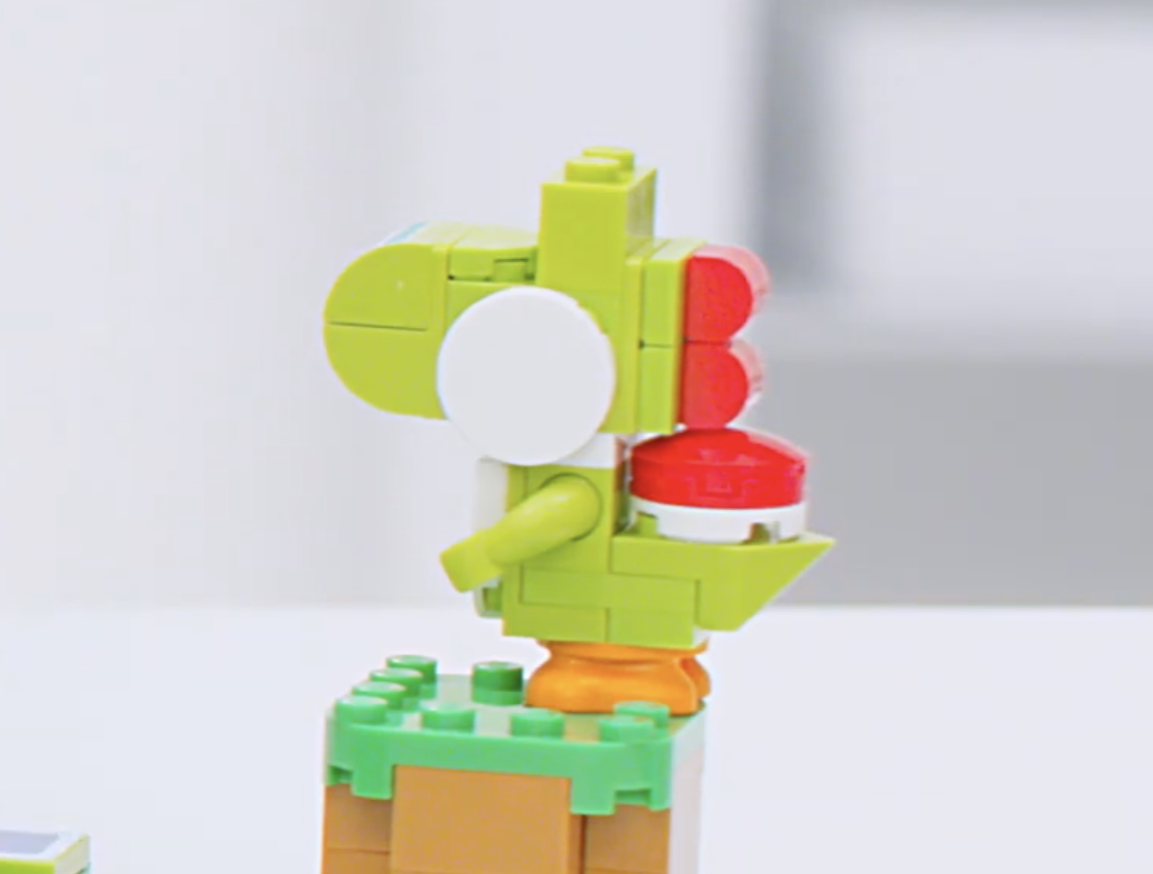 Yoshi has a ton of things going on. Check out his shell on the back. I couldn’t find a spot in the video showing the front Yoshi though. 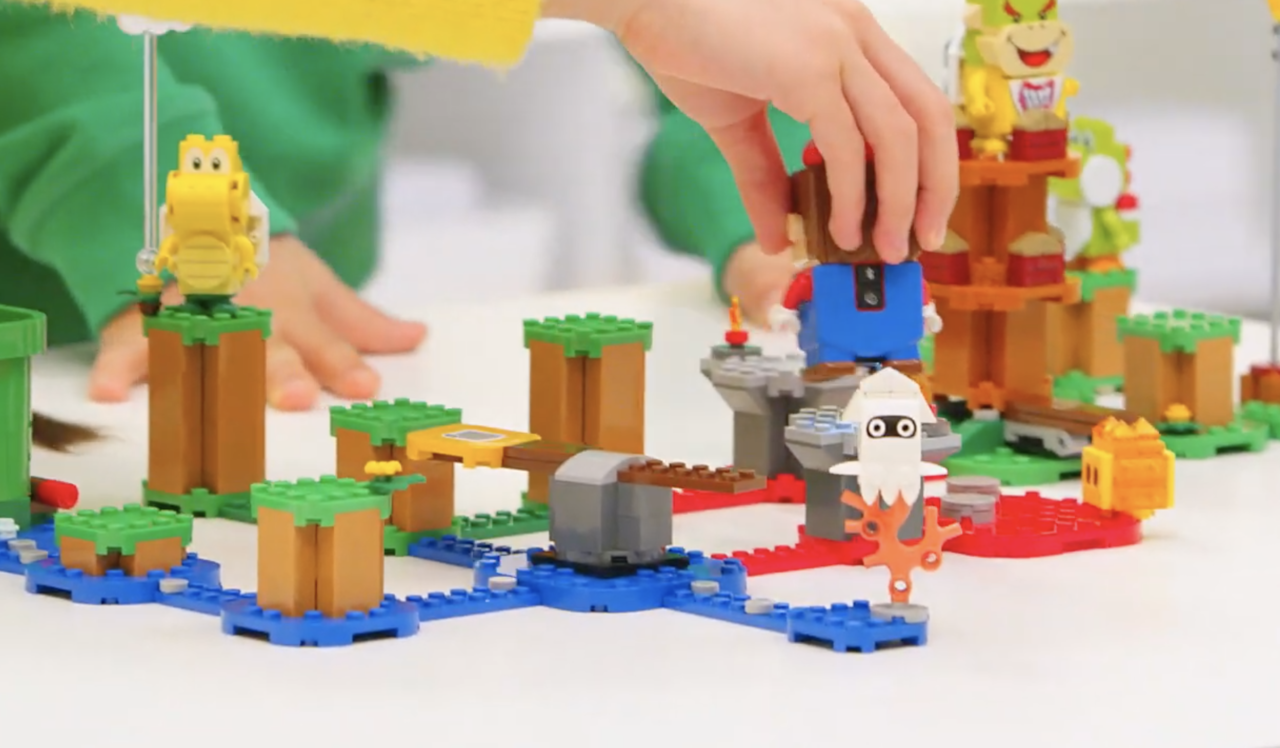 Here’s a cap that shows a Koopa Troopa, Blooper, and Lava Bubble.

Other than Mario being one giant electronic brick, everyone else who are shown are brick-built figures with varying degrees of success. Yoshi looks particular well done, but that Goomba is an eyesore.

Let’s Talk About That Flag 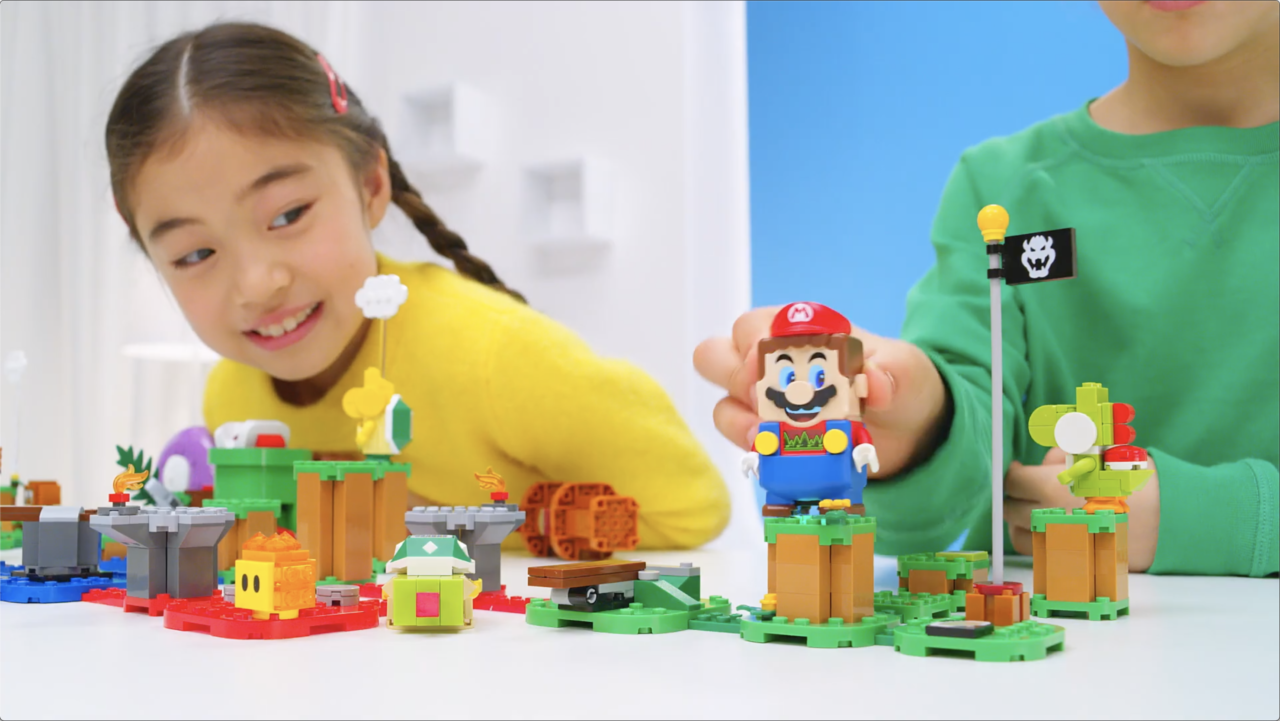 Near the end of the video, when the kid moves Mario from one space to the one in front of the flag, Mario’s eyes animate. You can see him above with his eye’s looking left towards the flag. I downloaded the video and stepped through the sequence frame-by-frame. It starts at about the 40 second mark. When Mario is placed in front of the flagpole his eyes are now looking up towards the flag. 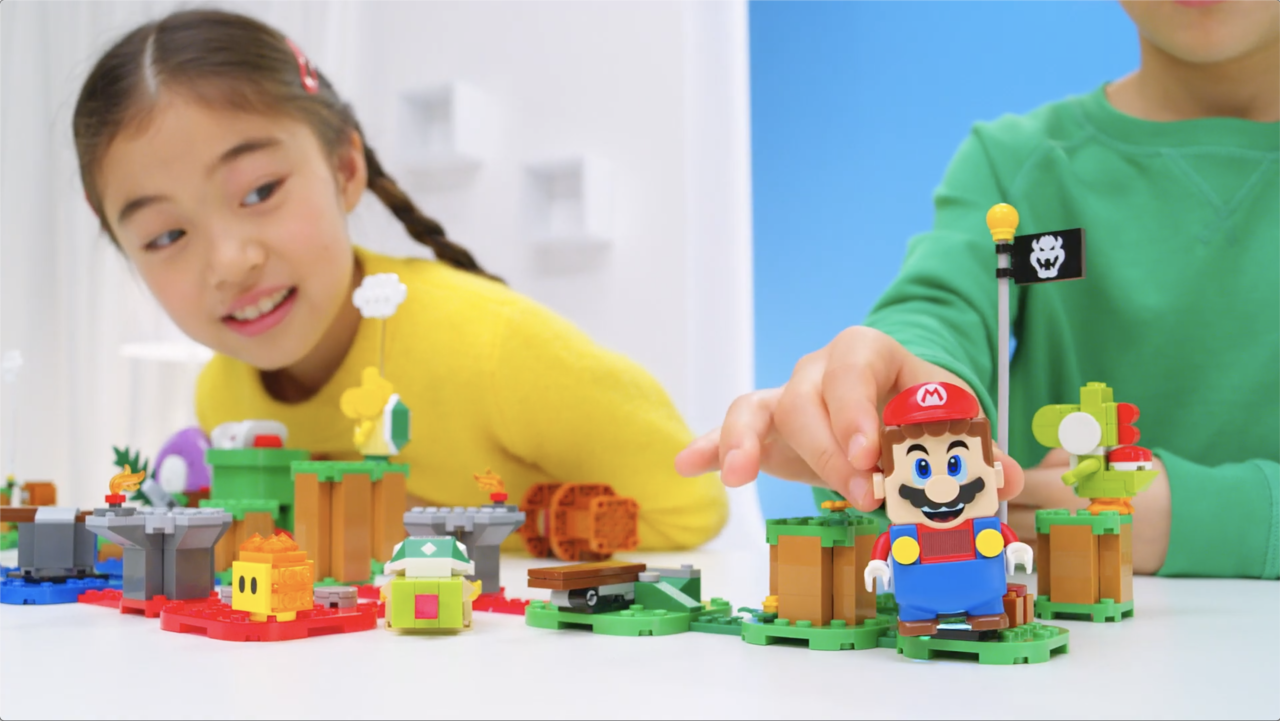 Mario’s eyes tracking the flag could have just been a serendipitous event luckily caught by the camera. Or that flag or flagpole or the base of the flagpole has a bluetooth transmitter where Mario reacts to it based on his proximity. After all, there is a bluetooth button on the back to enable discovery. So far, we’ve only seen his camera working to enable all of the animations and sounds when interacting with the other elements by scanning barcodes.

The bluetooth obviously has to serve a purpose, and it could just be another for Mario to interact with other elements without the need of a barcode. Perhaps with other figures? Or a flagpole even. Unknown so far what exactly is happening but it’s fun to speculate until we get further details or the sets in our hands. 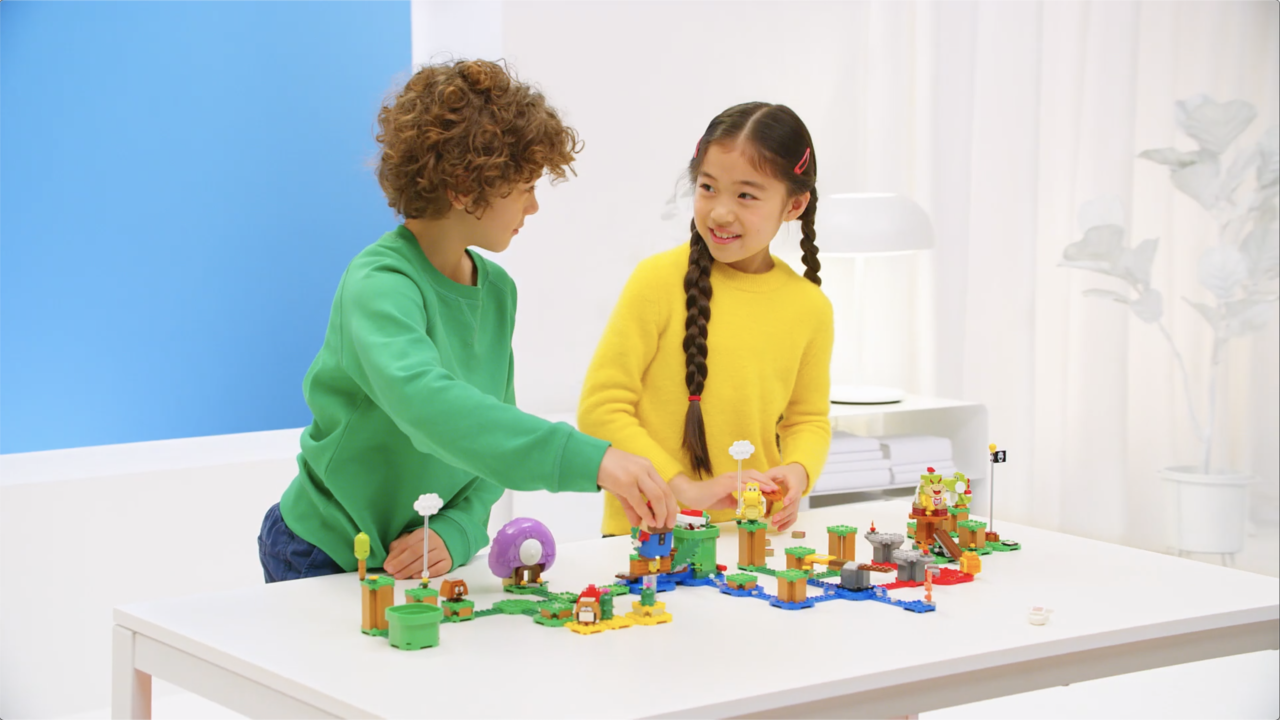 This is the complete layout of what I assume to be a level. It doesn’t seem to be based on any real game layout as it is a hodgepodge of various levels. There’s a water, lava, grass,, and mountain areas. Well, to be honest, i’m not sure if they’re called mountains or hills. It’s those platforms where there’s grass on top and then sheer rock below where you can fall to your death. Anyways, the last title card of the video says “Multiple sets shown” so I’m guessing each of those environments are different sets that you build and connect. You stick the beginning pipe on one end and the flag on the other and make your way across. 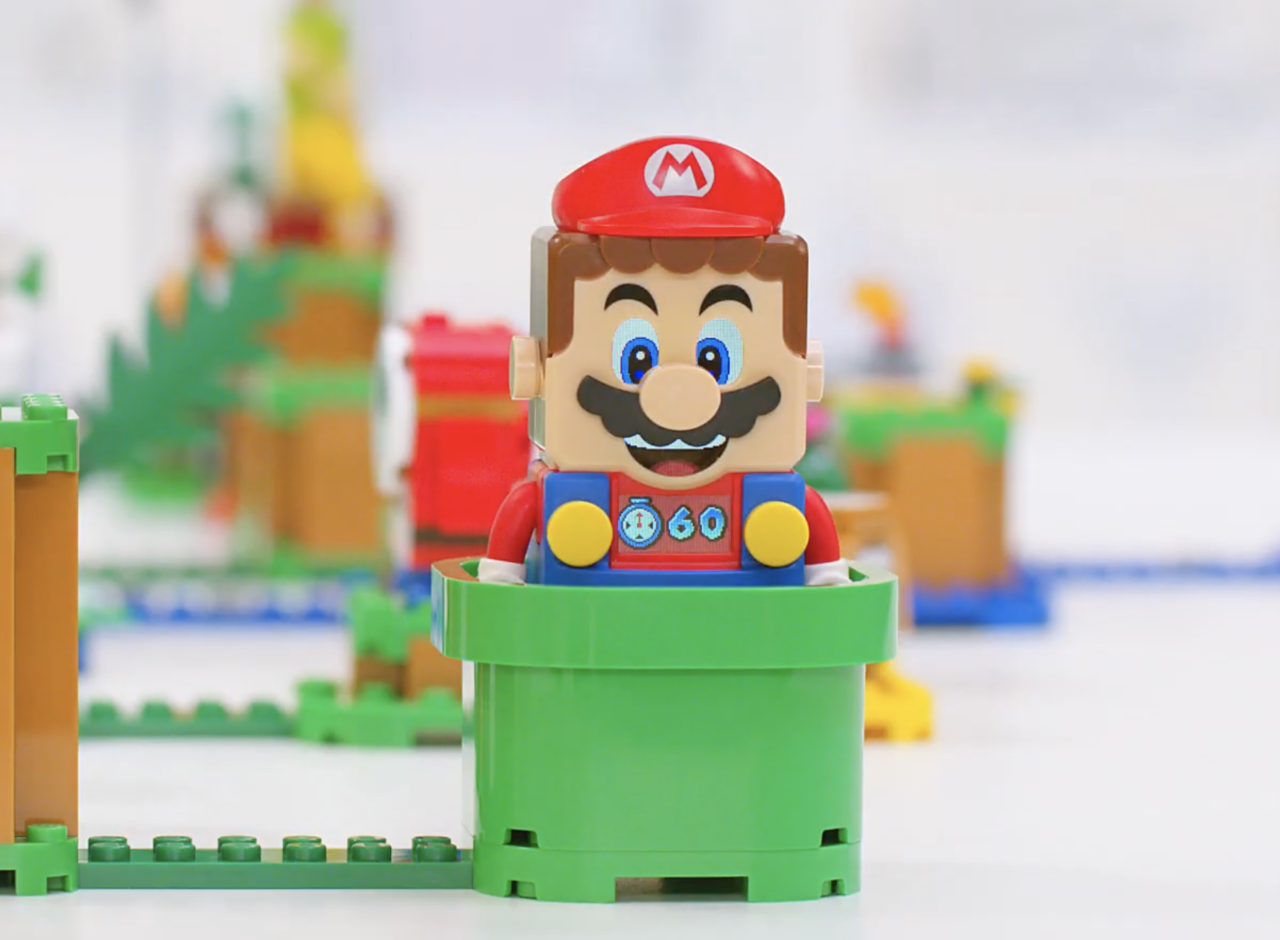 You start the level by sticking Mario in the beginning pipe to activate the timer. Progression through the level is still a bit of a mystery to me. Does Mario put up a random number to move him across sections? Is there a dice roll that we just haven’t seen yet? 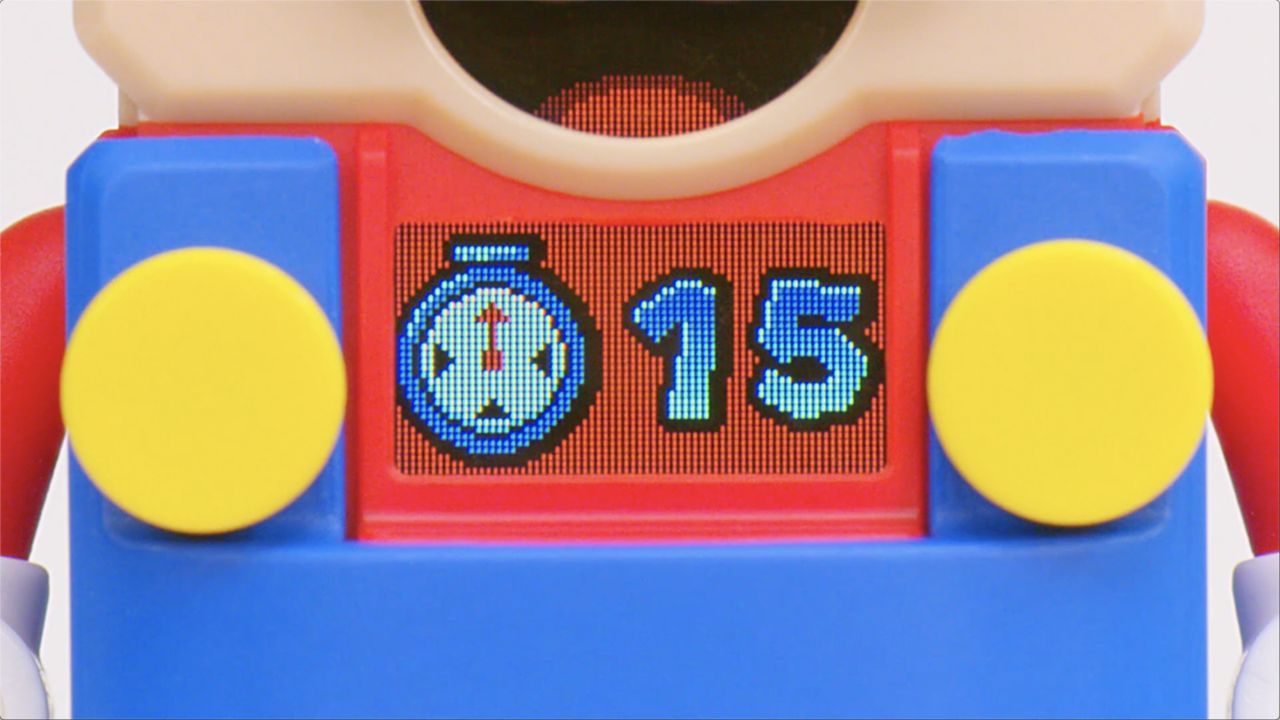 This does seem to be a timed activity because at some point the timer reaches 15 seconds and the fast music starts to play. If the goal is to reach the flag within a minute, what’s the mechanic that’s preventing someone from just picking up Mario from the warp pipe at the beginning and placing him in front of the flag at the end. The Mario video games doesn’t let you do that since it’s a linear game and everything in the level is an obstacle. Goomba’s need to be stomped on or fireballed, Piranha Plants need to be avoided, hazards needs to be traversed, and so on. There’s nothing restricting Mario to the path you create when connecting the levels together.

The video also features a hand-off of Mario between the two kids. Is this a Player 1 vs Player 2 feature? Is it a co-op game? What is going on?

This Mario figure also begs the question if other characters will be the same. Will there be a Luigi with animated eyes, mouth, chest and sound effects? Princess Peach? Bowser? Link? The teaser video, while answering some questions, brings up more.

I had no idea how this theme would be done. I, like probably every other LEGO fan out there, made the assumption that it would take the same approach as any other licensed theme: minifigs of Nintendo characters, sets based on famous locations from games such as Hyrule Castle, Bowser’s Castle, Karts from Mario Kart, minifigs of characters. But that is not what we got. The theme is called LEGO Super Mario so even if we’re restricted to just the platforming Mario games, this is still not what I was expecting. LEGO and Nintendo seems to be trying to recreate the platforming experience using bricks and plates. The paths look something like one of the old LEGO board games adapted for Mario.

Like I mentioned earlier, the reveal shows multiple sets. There’s no indication how the sets are broken up, what the price points are, or what other sets in the line there are if any. There are a couple of rumored lists out there with set numbers and price points, so there’s still hope that we may see a variety of sets and that what we see in the video isn’t indicative of what the entire line is going to look like.

My prediction on its reception is that LEGO fans are going to hate it, but non-LEGO Nintendo fans will eat it up. I’m a huge fan and of Nintendo, but my reaction is coming from the LEGO fan inside me. After seeing the video, I get now why Mario looks the way it looks. I don’t exactly hate what’s been shown so far, but I’m not in love with it either. My tempered expectations will remain reserved until more is revealed. So far though? Not a fan but I’d be lying if I said I wasn’t going to buy it.