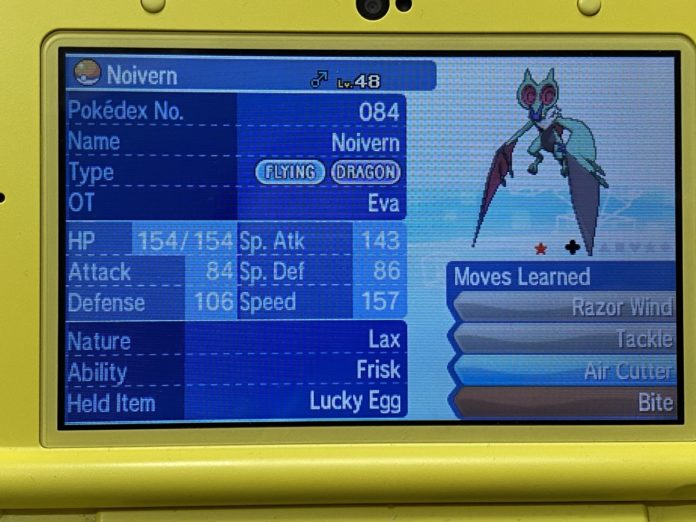 While I was in Verdant Cavern hunting for my Shiny Digletts, there was another Pokémon there that I wanted to get: Noibat. I’ve never actually seen the shiny version of it before, not even online so I thought I’d hunt for it to see what it was like. I was glad I went in blind because because seeing it in game for the first time just wowed me:

My picture doesn’t really do it justice but the teal coloring is really nice. The first one was caught at 55 SOS calls, the second one 131 at calls. It took awhile to get it to level 48 to evolve into Noivern, but it was worth the effort because Shiny Noivern was just as nice.

If I had to pick between the two I think I’d go with Noibat as being the prettier shiny. They’re both so, so nice though.

After that pair, I randomly picked the Makuhita and Hariyama Pokémon to hunt for. This guy popped at 118 SOS calls.

Purple Hands Hariyama appeared in the wild at 50 SOS calls. These last four were so quick, I was sure that a marathon battle was headed my way.

And I was not wrong because Shiny Pikipek arrived at 886 SOS calls. After the first four in this post that came in quick succession, I browsed through my storage boxes to see what other Pokémon I should hunt for. I remember from my Sun/Moon days, there was one Pokémon I tried hunting for but ultimately gave up on because it was taking so long: Pikipek. I managed to catch two others and evolved them but never got the third. I kind of remember this being the last hunt before I moved on from the game onto greener pastures. So after a whopping 886 SOS calls, I finally completed the Pikipek / Trumbeak / Toucanno trio. Funny how both Pikipek attempts took a long time. The first run in Sun killed the game entirely for me. The second one in Ultra Sun was high enough to do the same, but I think after Zorua this was a walk in the park.

As I write this, I haven’t picked my next target yet, but since Pikipek is the first non-starter Pokémon in the Alolan Pokédex, it might not be such a bad idea to go in ‘dex order. According to my storage boxes, my next target would be Ledyba. We’ll see if that holds my interest long enough. One hundred forty-five down, two hundred forty-eight to go.