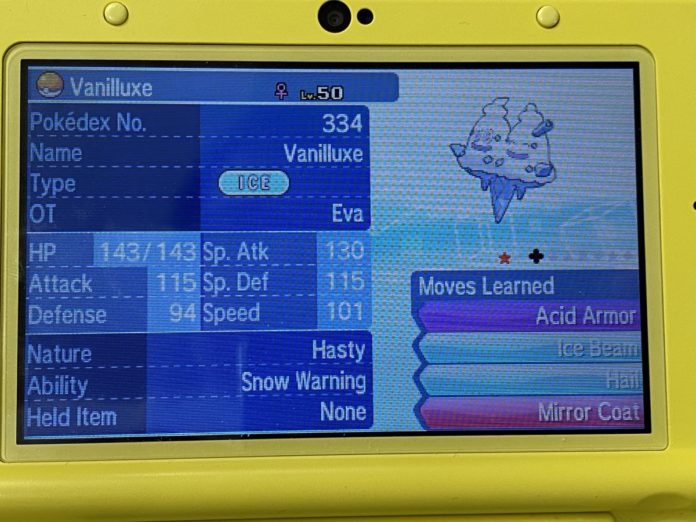 Moved on with my Pokémon life that is, cause haha how can I give that up haha… haha… ha… (laughs in sadness)…

But seriously, I hit about 1,535 calls before accidentally killing the calling Zorua and decided that rather than try and catch it again and be miserable about it, I moved to a different area and tried to get some other shinies and hope they went more smoothly. So, goodbye, Zorua, you POS, I’ll catch ya later, and hello Crabominable.

As usual, this was the first shiny Crabrawler I caught at just 48 calls. That was such a relief to get so early. I might have spoken to soon though because…

The second shiny Crabrawler took 810 calls. I was actually amazed I didn’t accidentally kill it during those 810 calls. And yeah, I totally went through the different stages of shiny pokémon hunting. Everything after this was a breeze.

You can barely tell but there’s a shade of purple there. This was my first Shiny Alolan Vulpix which I evolved into Shiny Alolan Ninetails here. Getting it at 81 calls makes it super sweet.

Hunting Vulpix is one of those hunts that can spawn an ally that’s not another Vulpix if it’s hailing. And that’s just what happened.

Vanilluxe has a 1% chance to show up as an ally during hail, and after 108 SOS calls, it did just that and as a shiny to boot! The chances of it showing up and as a shiny is like,… (does some mathing)… like, really, really low and I was thrilled to bits.

After that I did manage to get the last Shiny Vulpix to complete the line at just 16 calls. Yeah, I couldn’t believe it either.

After the Vanilluxe/Vulpix episode, I needed to step away to think about a strategy of trying my hand at getting Vanillish. The Vanillite/Vanillish/Vanilluxe Pokémon only show up in the game as SOS allies much like Mareanie so farming them is a bit more difficult. It’s either farm during weather and hope they pop or try and hatch them from an egg as shiny. Without a solid plan of what I needed to do, I decided to keep hunting instead and went for the surf’s up Pokémon, Alolan Diglett. 216 SOS calls later and he was mine.

And of course, the line wouldn’t be complete without Alolan Dugtrio, the second Diglett was had at 36 calls.

These are the kinds of hunts I enjoy. Nice and fast. The Zorua hunt left me bitter but these made up for it. Not sure where I’ll go from here but it’ll be awhile before I go back to Zorua. One hundred forty shiny Pokémon down, two hundred fifty-three to go.