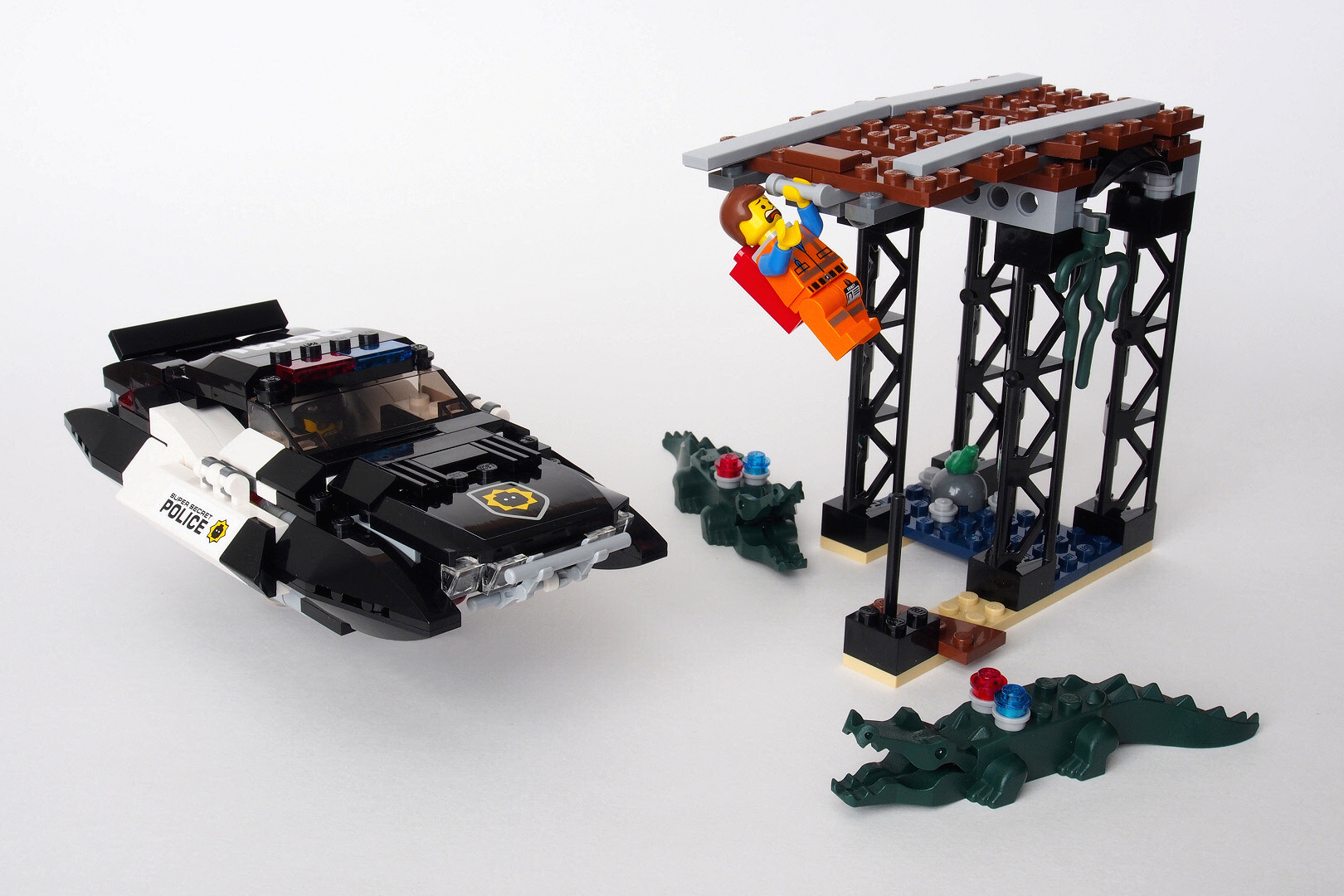 My first impression of this set was… it seemed very familiar. It didn’t click immediately but I was remembering the Agents Swamp Raid set from five or six years ago. It too featured a pair of cyborg aligators and a collapsing stilted platform, so I can’t help but feel like this was a rehash of the old set to some extent. Except now we get a boss flying police car instead of a bike.

The hover car itself is great. Solid build and nice curves everywhere. It has way more of a Fifth Element vibe to it than Deckards Spinner from Blade Runner, even though that seemed to be the go to reference when talking to people about the set. 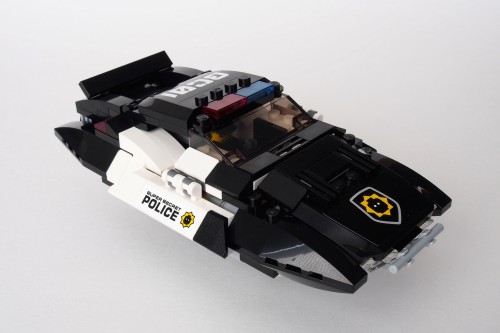 Four stickers jazz up the hood and wings. The two larger ones were a bit difficult to apply centered, but being opaque black on black parts means no concerns about bullbes ruining the look. I especially like that they have “SUPER SECRET POLICE” on the wings. Nothing says secret police like officially labeled vehicles. Notably absent is flick fire missiles in any form. I’m serious. Somehow they snuck this vehicle through the approval process without any shooting features. Instead we get retractable laser weapons that you pop up from under the wings on the sides:

How fun is that? 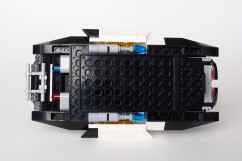 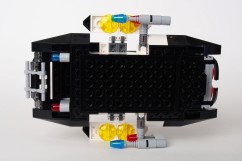 There are also a set of retractable police lights under the hood that you can flip down, but they’re not very noticeable in either configuration and I can’t help but feel it would have been better with some sort of engine detail there instead. 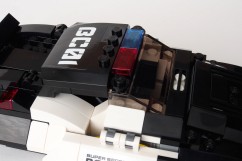 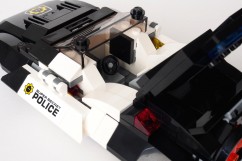 The roof flips back to let Bad Cop into the spacious interior. It seems oversized for a single ocupant vehicle, but at least there’s plenty of room for his stud gun. And yet not enough for a prisoner. I guess Bad Cop doesn’t take prisoners. 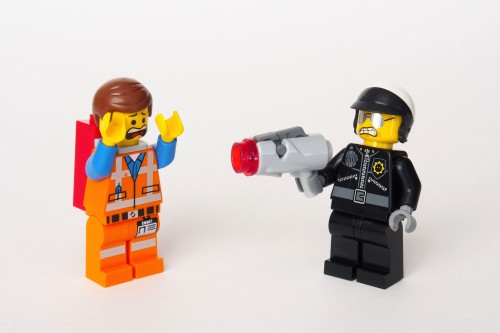 The set comes with Emmet and Bad Cop of course. Both with reversable heads and different faces from the Collectable Minifigure Line versions.Â 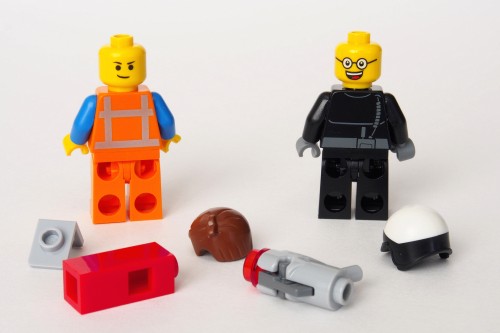 Emmet’s horrified/mischevious head is in several other sets though and Bad Cop only comes with one of the new stud guns, no handcuffs or smartphone like the bagged version, so that’s a little bit of a let down. 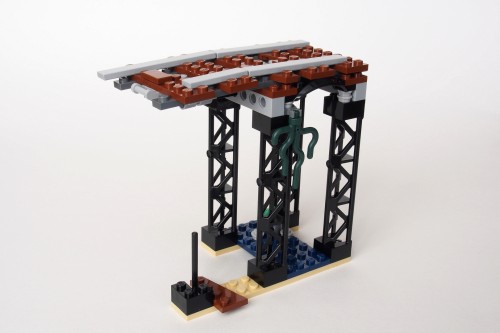 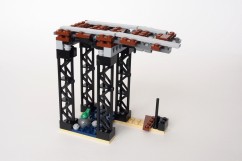 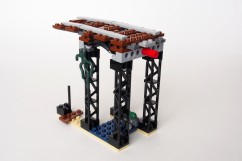 The platform is simply underwhelming. I’m sure it’s from a specific scene in the movie where Emmet gets chased to the end of a railroad bridge that collapses under him. 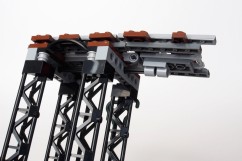 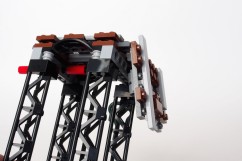 The collapsing feature functions well enough, although when raised the tracks don’t line up very well. That might be part of the design though so who knows. I’d say the set would have been better off at a lower price point with just the car, but what do I know about marketing. 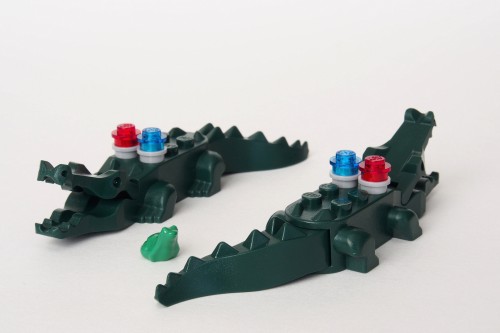 Waiting hungrily under the rail bridge is a pair of policigators (or copodiles maybe?) and a frog for good luck. Not as fancy as the ones from the Agents set I mentioned above, but maybe the super secret police department just doesn’t have the budget for enhancements beyond red and blue lights.

Verdict
Solid 3 out of 5. This is the only set with Bad Cop in it and the hover car is rather nice, but the rest of the set is somewhat lacking. Considering the other mid range sets it’s up against I might call this the weak link of the lot, although still not exactly bad.