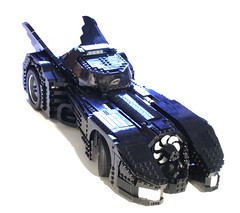 We don’t feature nearly enough MOCs here on FBTB, and by that I mean any. But we should, right? I mean look at this. It’s huge, it’s awesome, and it has retractable guns that pop out with the turn of a knob (and an opening canopy with detailed interior).

So here’s the deal: you build something that impresses us that’s within the scope of this site (we’re still focused on licensed themes: Star Wars, Batman, Toy Story, SpongeBob, etc.) and we’ll post it under a new feature called MOC Spotlight that we’ve been thinking about starting for a long time but kept putting off… sound good?