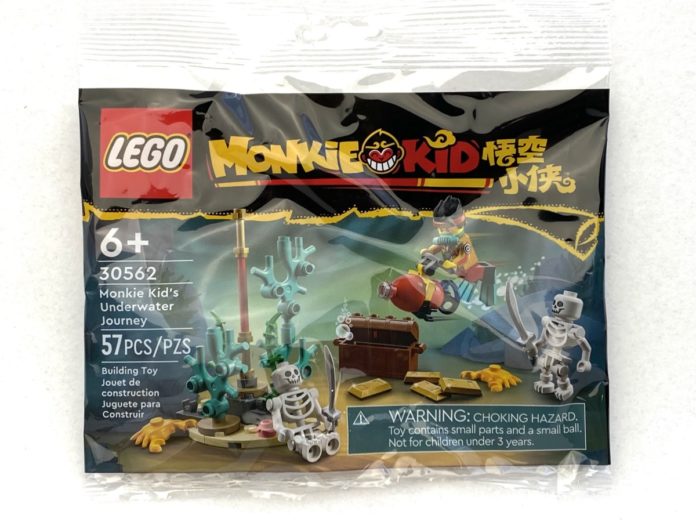 Remember when I said getting two minifigs is rare? Well getting 2.5 of them in a single polybag must be a unicorn. Today’s set, 30562 Monkie Kid’s Underwater Journey, has just that. Okay, I’m being a bit cheeky since technically there are three minifigs but two of those minifigs are skeletons. That’s a bit of a cheat since it costs nothing for a robot to pick up two sets of parts from the same parts bin but I’m not complaining because getting two skeletons instead of one feels overly generous in the world of polybags.

Today’s set is sponsored by The LEGO Group which sent me this set to promote their current promotion. You can get 20562 Monkie Kid’s Underwater Journey for free with a $40 purchase of any combination of LEGO Monkie Kid or LEGO NINJAGO sets. The offer expires on 1/27 while supplies last. If you click on any of the links in this post that to take you to LEGO.com and make a purchase, we’ll get a few pennies that go towards operational costs of the site. We thank you for your support. 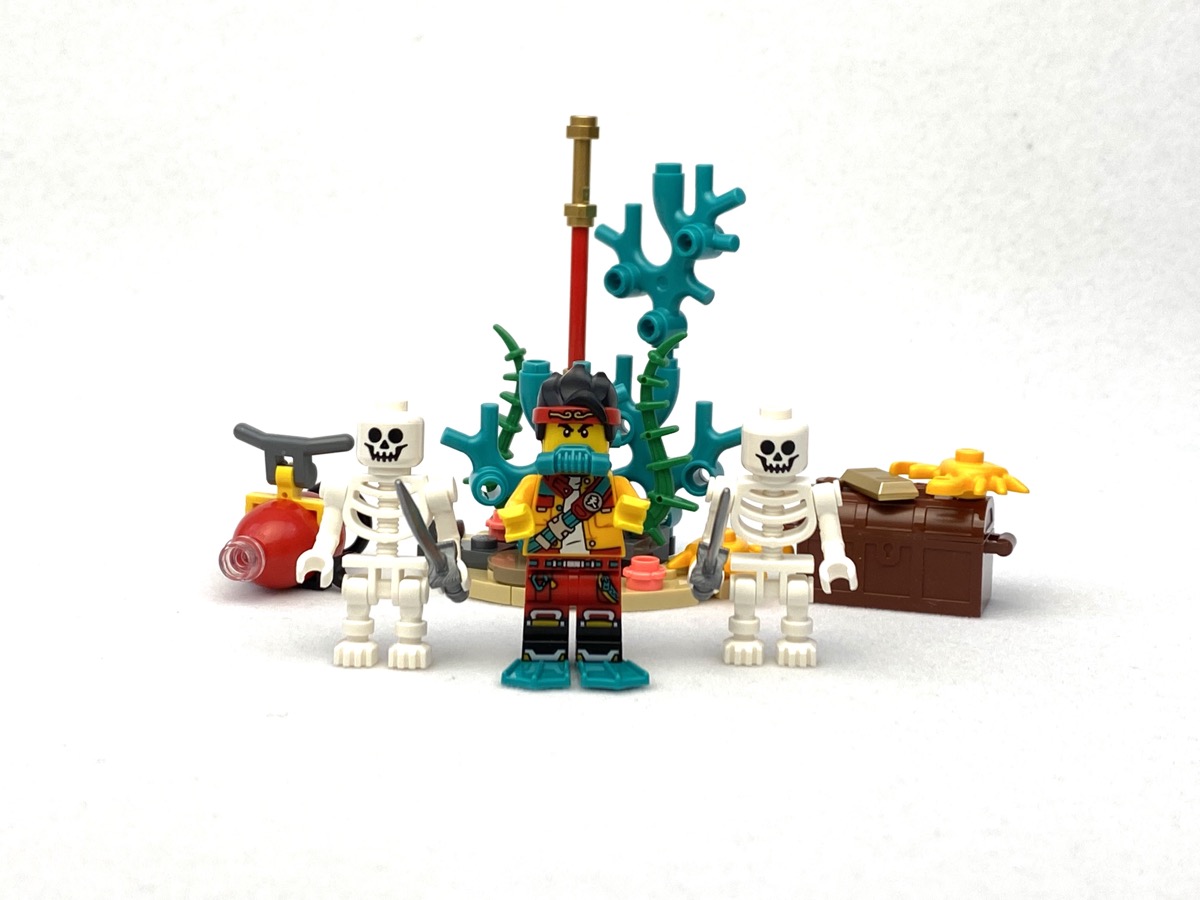 I’m not familiar at all with Journey to the West, the 16th-century Chinese novel the Monkie Kid theme is based on, so I’m not sure if there is an Underwater Journey that’s key to the story or not. This set features some sea floor items, two skeletons, a treasure chest, a weapon, an underwater scooter, and the Monkie Kid himself. 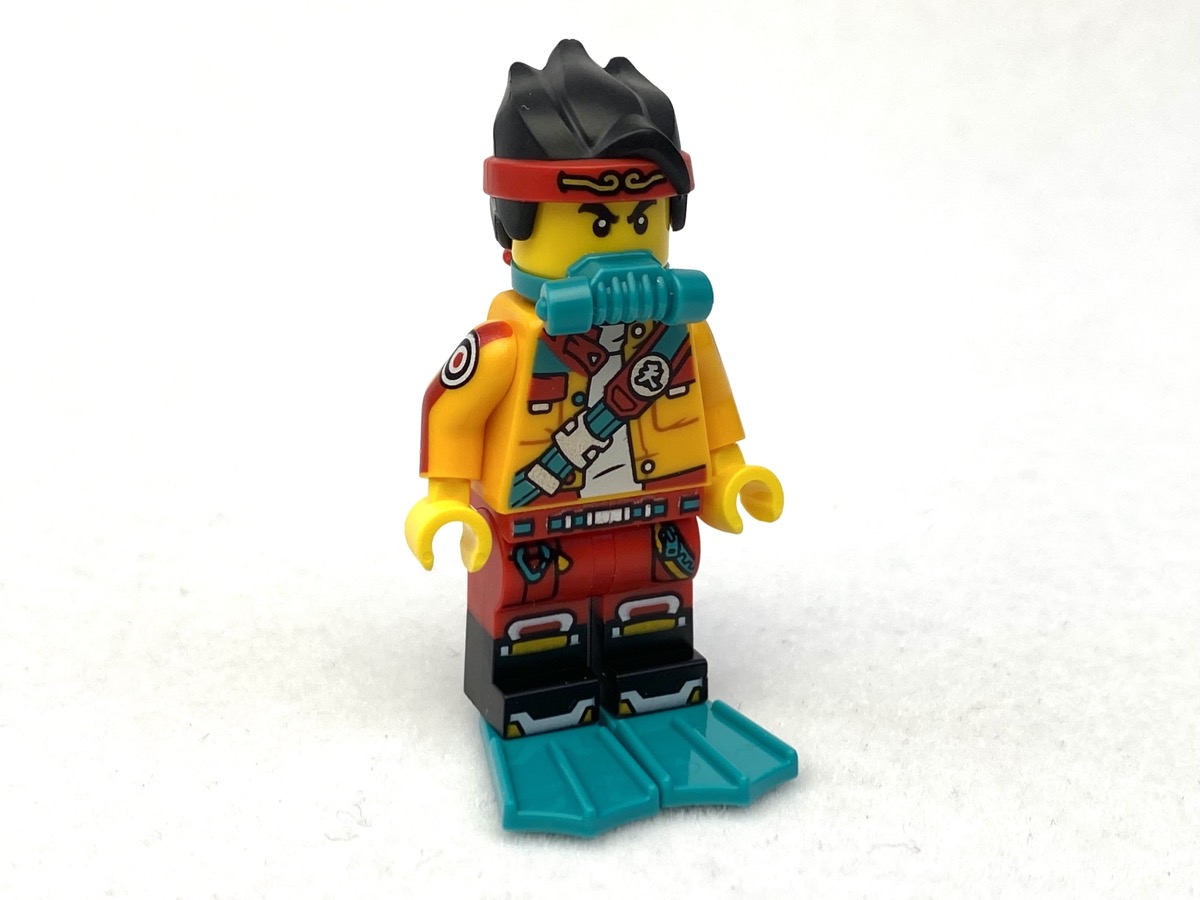 Now this minifigure, LEGO seems to have pulled all the stops on the Monkie Kid. It features printing on just about every surface except the sides of the legs. 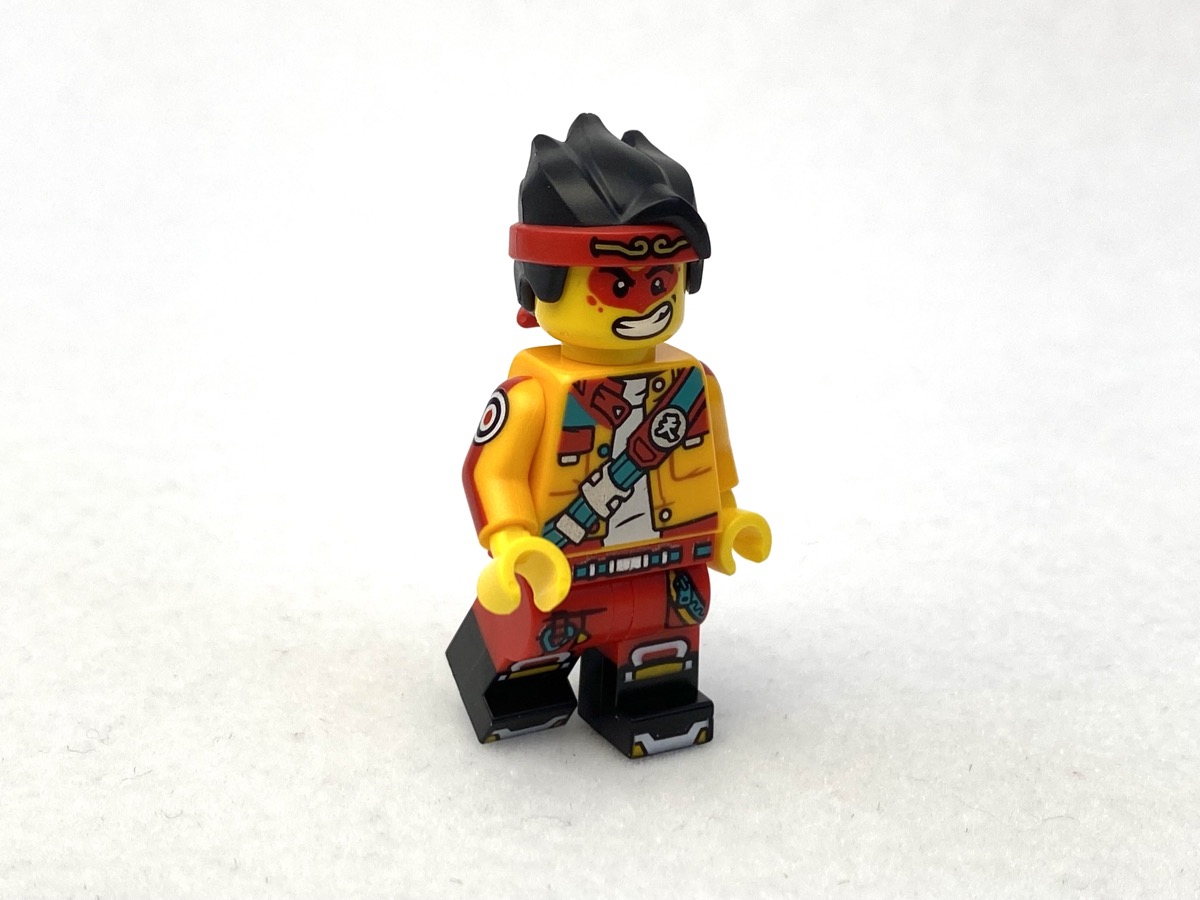 There’s even a small print on the bandana. The detailing isn’t overly done, but the sheer amount of it makes it look super busy. This is the same minifigure you get in two other Monkie Kid sets, 80031 Mei’s Dragon Car and 80033 Evil Macaque’s Mech. 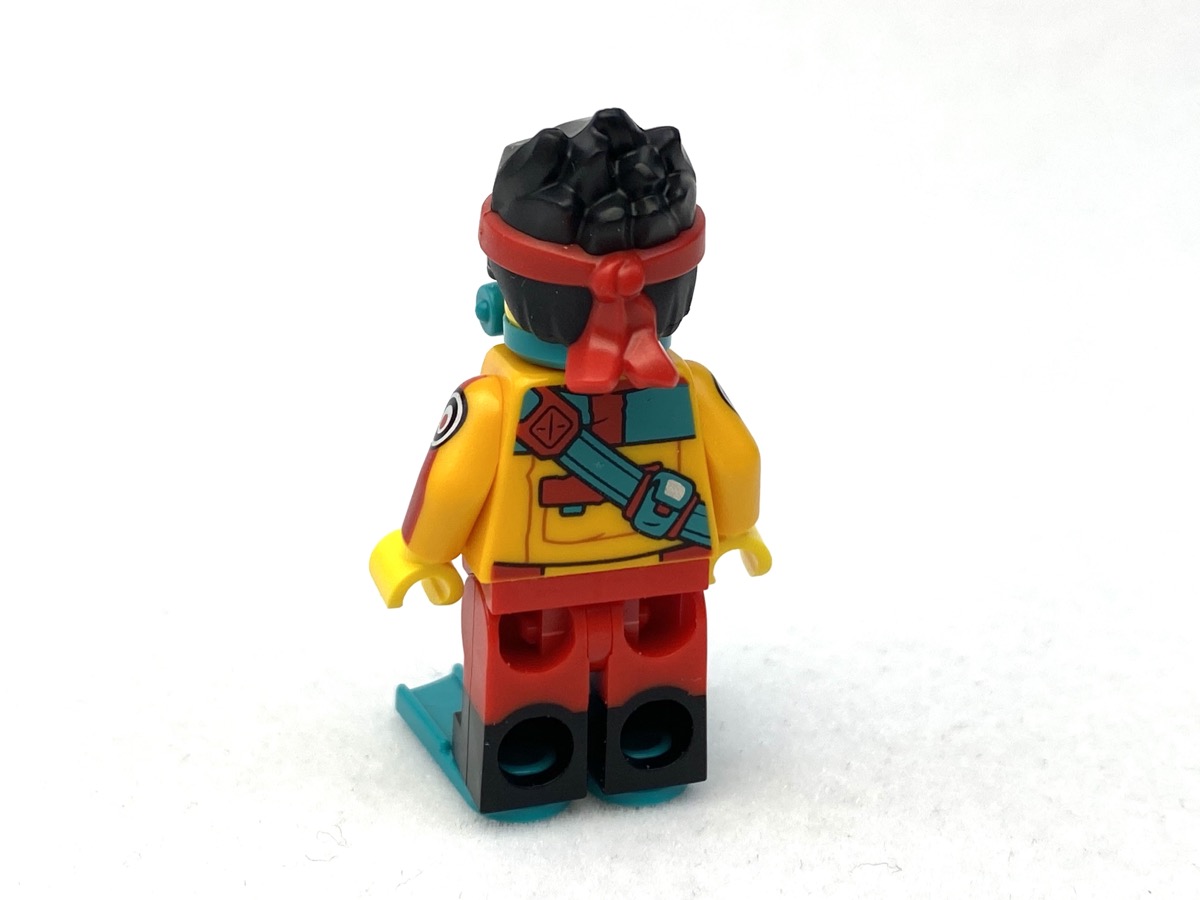 Looking at pictures of other Monkie Kid minifigures, this amount of detail appears to be the norm rather than the exception. He is the star of the theme after all so it makes sense but it begs the question why LEGO doesn’t offer this level of detail with other minifigures in other themes. 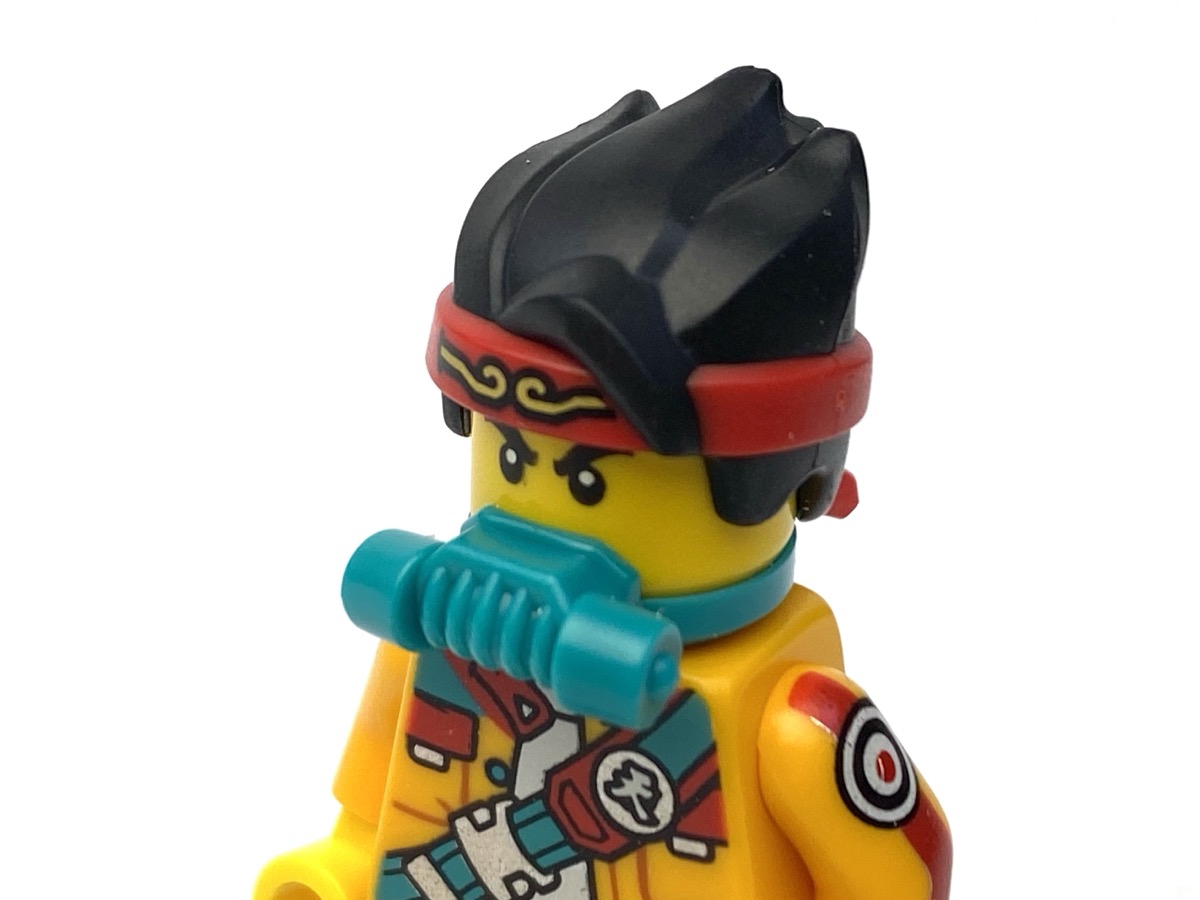 My favorite piece is the underwater breathing device. If LEGO ever re-releases the Gungan Sub, they need to include this piece for both Qui-Gon and Obi-Wan instead of printing on the head like last time. It’s a super snug fit and covers the mouth on one side of the double-sided head perfectly. And you get a spare to boot! 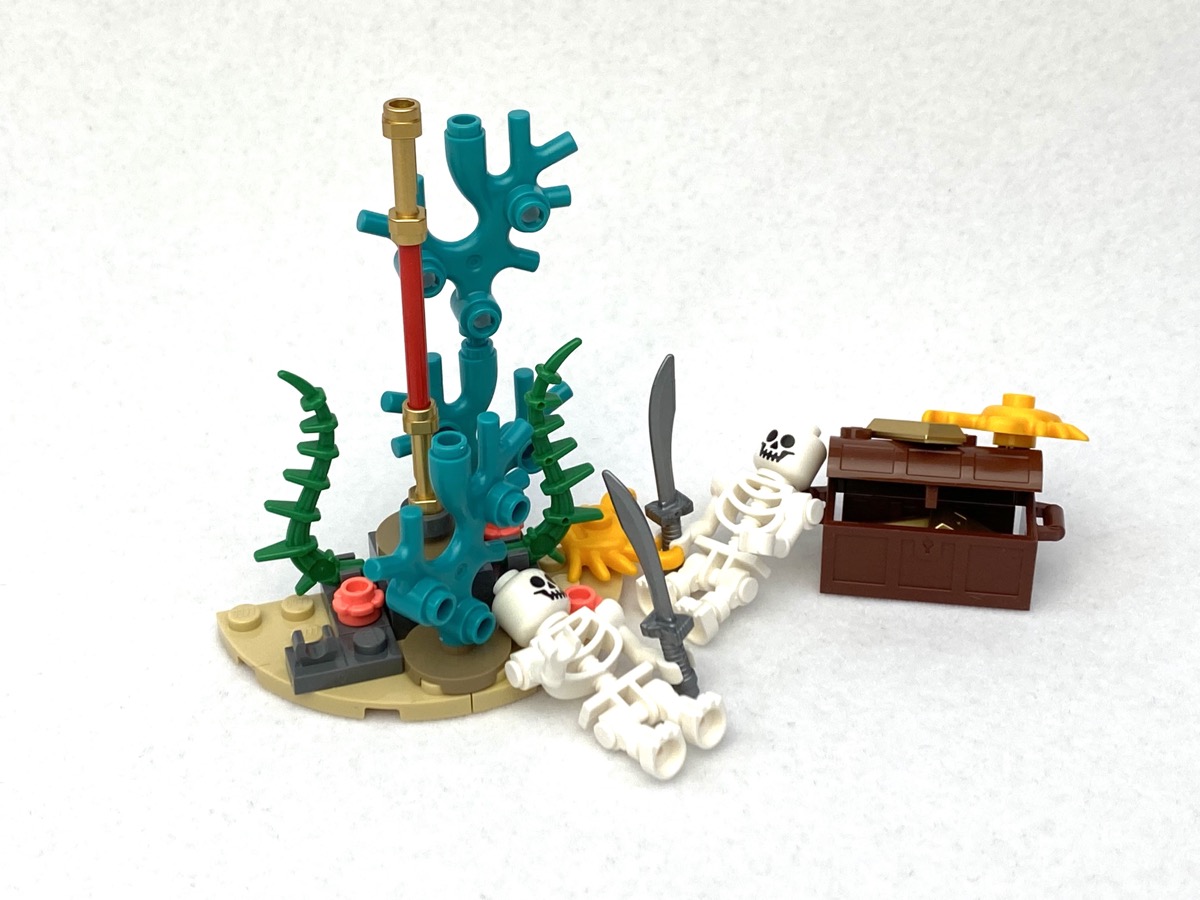 The piece of seascape you build has some kelp hiding a what I presume to be a long lost ancient weapon with a treasure chest nearby. Those two skeletons I mentioned populate the scene as either undead warriors guarding the coveted items or previous treasure hunters that succumbed to the sea during their hunt. It’s a nice complete scene and depicts exactly what it says on the package. That seems like such a low-hanging-fruit goal to achieve but going back to day 1’s set, 30588 Kids’ Playground, LEGO couldn’t do it on that set.

This set rocks! It’s my first Monkie Kid set and it didn’t disappoint. The contents of the bag execute the name of the set, 30562 Monkie Kid’s Underwater Journey, perfectly. Honestly, if they just stuck the Monkie Kid minifigure with the underwater scooter and called it a day, it still would have rocked. But there’s a whole underwater scene you build for Monkie Kid to interact with that offers some more play value. 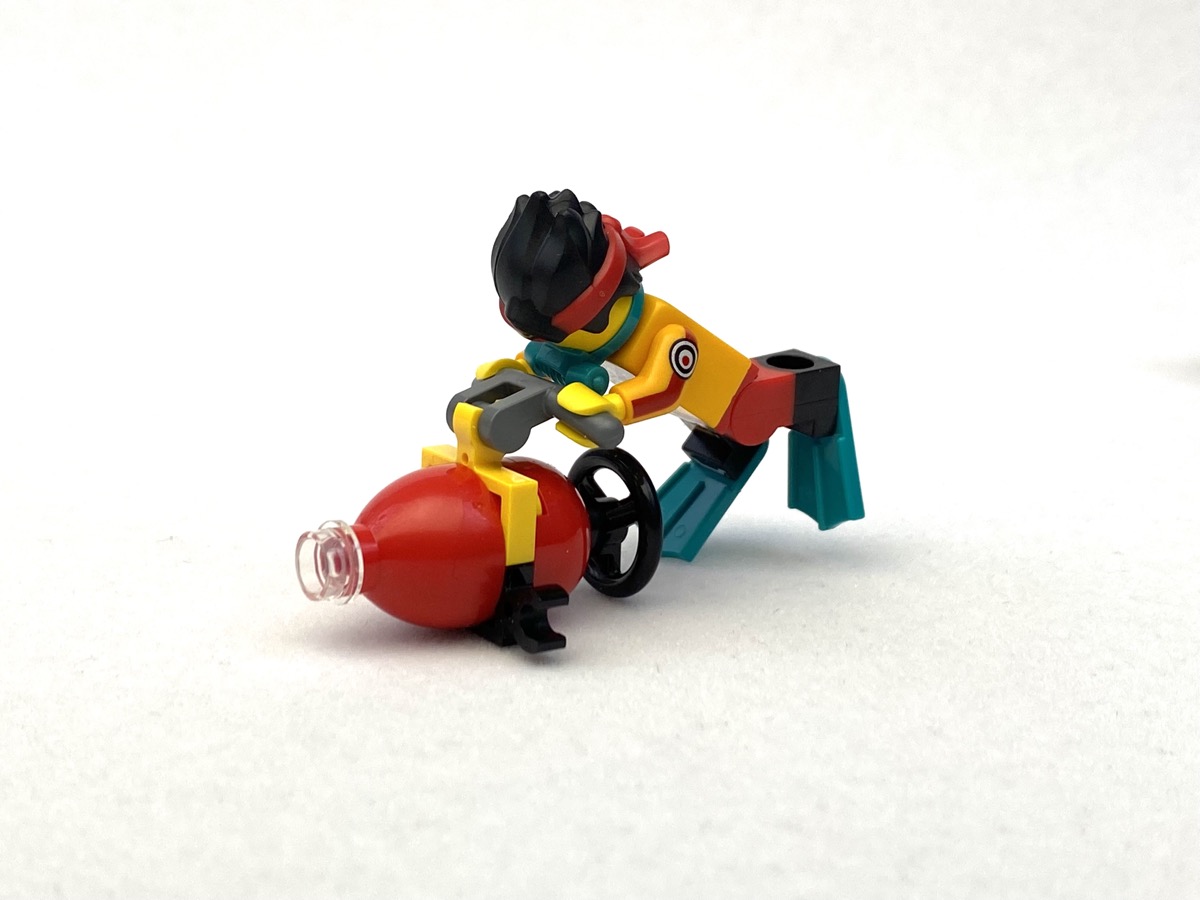