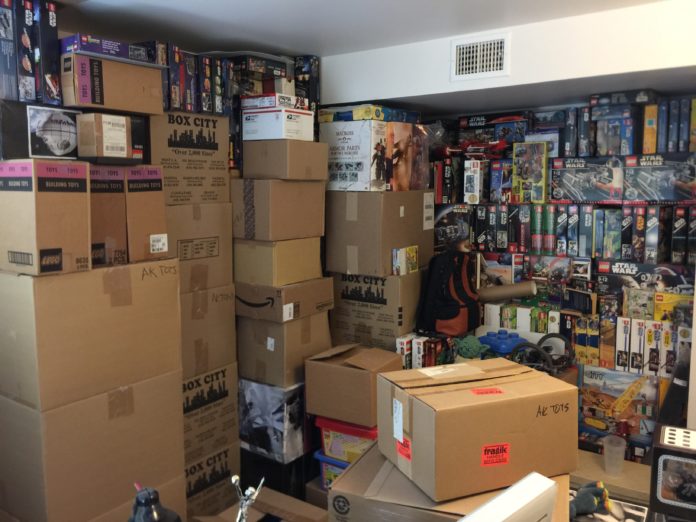 Too much stuff. I have it. You probably do too. Ever since my post about being burned out went up, I/we received a lot of encouraging and touching replies. No words can express how I felt. It was a mixture of emotions that’s for sure: part validation, part gratitude, part guilt, and many more. I definitely felt much better afterwards though. But through it all, there were a few interesting responses that all shared a common thread and struck a chord in me loud enough for me to take notice. This is something I like to call “The Secret Shame”. It’s when this hobby, for better or for worse, takes over and you end up living with/in/on a pile of LEGO.

I don’t even know how to begin writing about this so I’m just gonna let it all out. I said I wanted this site to feel more personal, and I can’t think of anything more personal than this. The picture up top, and the other ones sprinkled throughout this article is a result of years of collecting, amassing, hoarding, whatever you want to call it. I can’t remember exactly when it took over, but at some point I let it get out of hand. 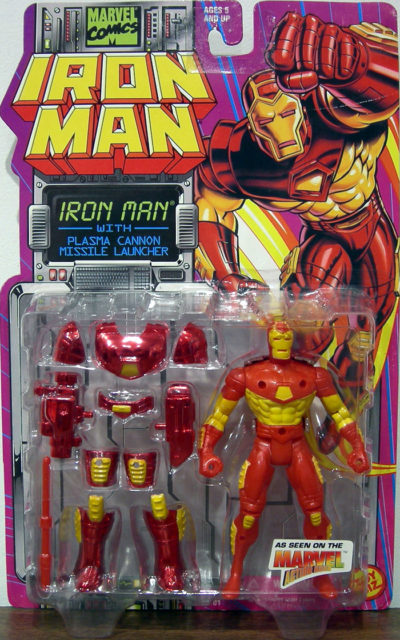 I can’t even remember when it happened exactly, when it became a real problem. I can kind of pinpoint when I started “collecting” though, and it was right around college when I started making a tiny bit of extra money. Back in the mid- to late-90’s, I bought a couple of Iron Man action figures by Toy Biz. It started off with one, then another, and then eventually I wanted to get all of the different armors. I had a pretty good variety of them and set them all up in a row on my bookshelf. I liked looking at them all lined up like that. They certainly can’t compare to the action figures coming out today. But that was when it more or less started.

How It Got Worse

It expanded from there. It wasn’t just Iron Man, it was Star Wars action figures, Transformers, Macross, anything new and hot at the time. LEGO was brought into the fold of things once the Star Wars license came out. Once I graduated college and got a real job, oh man, my spending allowance skyrocketed and most of it pretty much went towards toys.

My wife and I lived in an apartment that became more and more crowded with stuff. Not because of kids or anything like that, but because of my habit. Why my wife didn’t leave me or say anything, is beyond me. She never made me feel guilty or bad about any of it. We just kind of adapted to our ever-shrinking space and continued living on. By the time we moved out of our 1-bedroom + loft apartment, our movers told us we had enough contents of a 3-bedroom apartment. Yeah, I had that much stuff.

We moved into a pretty sizable house, and that just meant more space to squirrel things away in. I had an office where I stuffed all my crap into. And then I took over a second empty room, and then a corner of the master bedroom. Things were getting out of control. 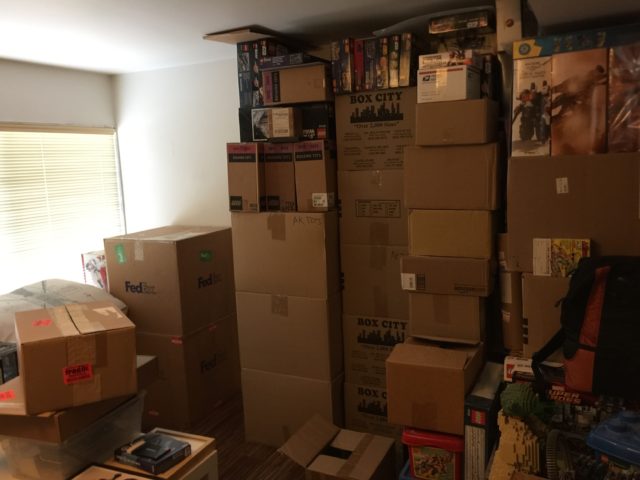 It’s bad. The picture at the beginning of my post is one corner of my office. This picture just above continues that wall o’ boxes on the left. This one below is on the opposite wall: 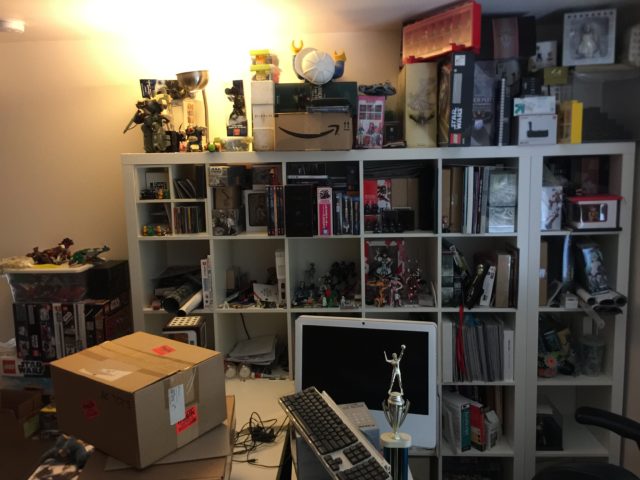 Our move was about 10 years ago, and everything you see hereÂ  in this post is the accumulation of stuff since then.

I will say though, that I did manage to let go of a lot. I sold off all of my Hasbro Star Wars action figures in a garage sale and let go some other action figures and toys through eBay and cleared up some space, but clearly not enough. 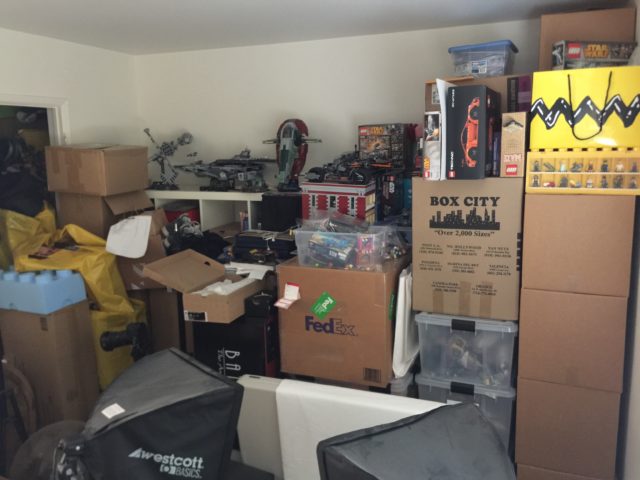 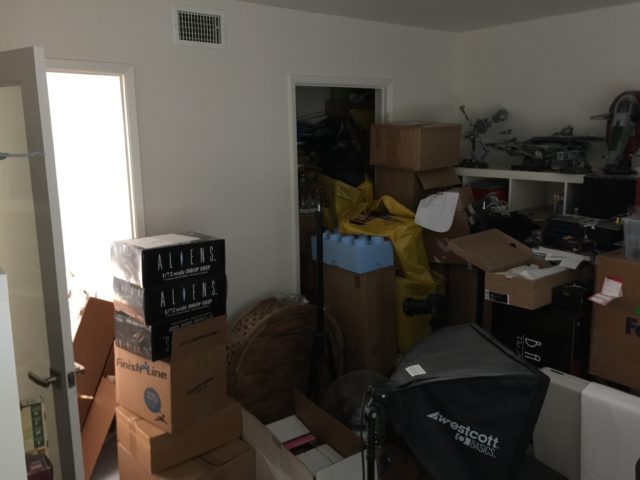 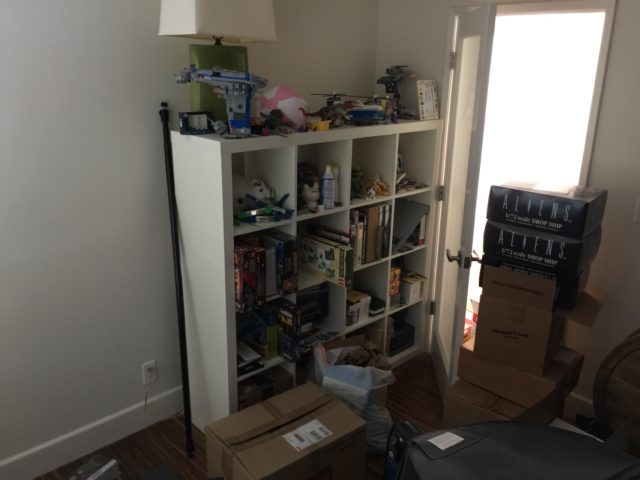 Things look messier than normal because we are getting work done in the house and I had to start shuffling some things around. All of these pictures were taken at the same time. In addition to all that, I moved a bunch of stuff downstairs: 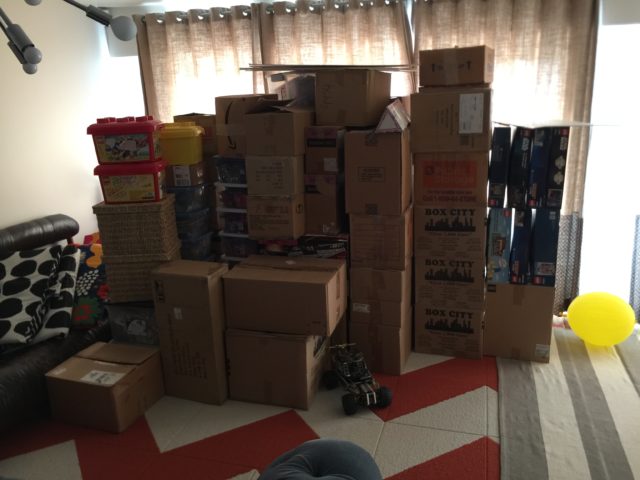 I’m not proud, but this is what my life is like right now. I had a really hard time coming to terms of writing this post and exposing my secret shame like this. Like I said, I wanted this site/blog to feel more personal and this is as personal as it gets. I also think it’s important to talk about the dark side of having a hobby, especially one where amassing hoards of crap is the norm no matter what the justification is.

I know I’m not alone in my collecting/hoarding habits. Though, I might be one of the few that is willing to let everything go. All this being said, I am not exiting the hobby. I just need my space back. We’ll still be around talking about LEGO, but as far as my own personal shopping habits, it’s got to change and it’s starting with me purging all my stuff. 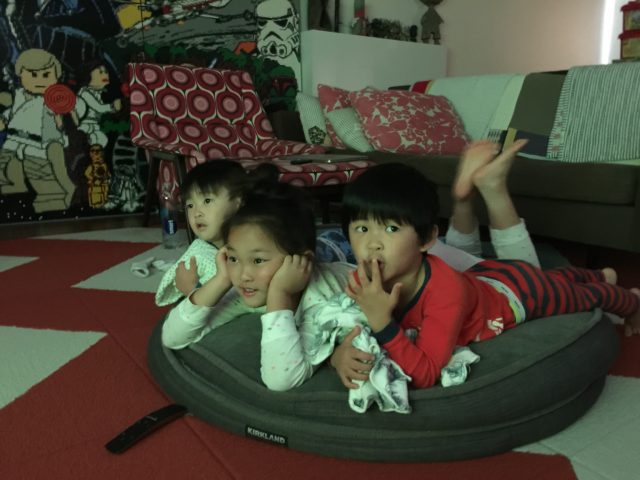 These are my kids. And I need to give them the space they deserve because it’s not about me anymore. I need to make their life better because as it is right now, I’m dragging them down this pit with me. And I am going to make that stop.

Life isn’t all roses and lilies and i think it’s important to air out one’s dirty laundry every once in awhile. You go onto Facebook, twitter, Instagram, what have you, and all you see and hear about is how great people’s lives and all the cool stuff they are doing, are making, have happening to them, and you know what? It can get downright depressing. Nobody ever talks about the bad stuff, the depressing stuff, the stuff that brings us down. I kinda believe that’s the hard things in life that connects us to each other more so than the good stuff people post about. People struggle everyday with things, yet it seems like no one ever talks about it.

And if you do, you’ll more than likely get shot down and/or made to feel bad for even having feelings. God forbid should you complain about something, like your commute to work, without having someone jump down your throat about other people you don’t even know being in worse situations. We’re all human; we all struggle and we all have our own shit to deal with. The things you see in this post, this is my struggle. I need to get rid of my stuff and I need to be held accountable. I figure if I post about it here, I’ve made it public and people will know. And that will be another reason for me to keep my ass in gear.

I need to sell off my collection, like ALL of it. I need to get rid of my stuff. I’ll be opening up the store part of the site again and listing stuff there. Prices will be below whatever the Bricklink low average is for any given item. I do need to move this stuff and I’d like to do it as quickly as possible and maybe try and make a little money. Keep an eye out for a front page announcement for the store. As far as my loose stuff, I’ll probably end up donating it to schools or something. Other than the store, I have not yet devised a strategy on how to get rid of it all so it’ll be a long process.

I am looking forward to getting rid of my stuff. I imagine I’ll feel less burdened, lighter, and freer. Anyways, I’ve run out of things to say. I’ll be making updates as time goes on. I don’t have a timeline on when I want to get rid of it all, sooner the better obviously.

So, uh, anyone want to buy a LEGO collection?