Rogue One: A Star Wars Story, the next chapter in Disney’s Star Wars Cinematic Universe, is scheduled to hit theaters in December of this year, December 16th 2016 to be exact if IMDB is to be believed. But a major plot point (or spoiler depending on your outlook) has already been leaked out at the Nuremberg Toy Fair last week.

The below screen cap shows a German news cast with a LEGO Star Wars image green screen. You can plainly see that the icon for Rogue One features a shot of a Slave I ship. Yay? Nay? Not sure how I feel about that since I was never a big Boba Fett fan. I just don’t understand the fandom that surrounds that particular character. If anything I’m a little disappointed that it doesn’t really introduce a new bad guy, but instead reuses an already-established character from the Star Wars universe. Yawn. 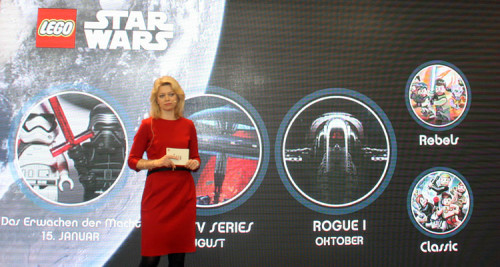