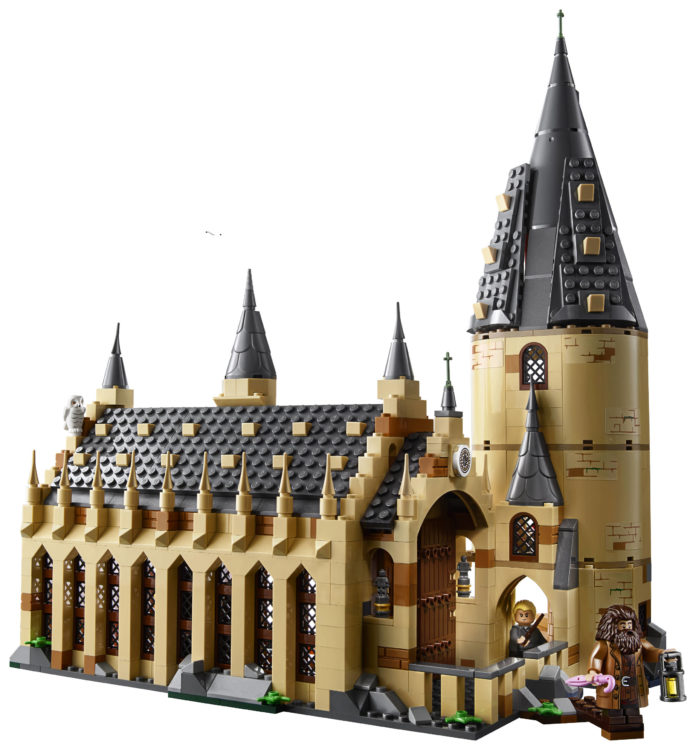 The first reveal for the revived LEGO Harry Potter line is 75954 Hogwarts Great Hall. This set will cost you $99.99 when it launches in August along with all the other LEGO Harry Potter and Wizarding World sets. Since this release is tied to toy fair, there is a good chance we may see more sets. We’ll find out tomorrow morning. More pictures and the official press release are below:

LEGOÂ® SETS FROM THE WIZARDING WORLDTM TO LAUNCH IN 2018

NEW YORK, NORTH AMERICAN INTERNATIONAL TOY FAIR (February 16, 2018) â€“ LEGO Systems, Inc., in partnership with Warner Bros. Consumer Products, announces that a collection of LEGOÂ® sets inspired by the Wizarding World will launch in the second half of 2018, bringing the film worlds of Harry PotterTM and Fantastic Beasts to life in LEGO form. This is a collection of building sets and collectibles inspired by the global blockbuster film franchises, slated to engage fans of all ages.

The LEGO Wizarding World-inspired building sets call on familiesâ€™ creativity and imagination to recreate the action-packed storylines from the films and feature a cast of fan-favorite wizards, Muggles and magical creatures in LEGO form â€“ from Harry Potter, Ron Weasley and Hermione Granger to Newt Scamander and more. Fans of all ages will also be able to collect their favorite Wizarding World characters in new LEGO BrickHeadz building sets.

During the annual Toy Fair in New York, the LEGO Group will unveil a special sneak peek of the LEGO Harry Potter HogwartsTM Great Hall ($99.99) building set, which will launch August 1st. Additional building sets and figures will launch in the second half of the year, with more details to come soon.

Jill Wilfert, vice president, licensing and entertainment for the LEGO Group said, â€œWhen it first launched in 2001, LEGO Harry Potter was a global sellout due to its broad appeal and ability to spark imaginative play, so weâ€™re thrilled to go deeper into the Wizarding World to bring even more magic and excitement to LEGO play. The Harry Potter and Fantastic Beasts stories are perfectly suited to construction play, and our designers cannot wait for fans to see how the films are reimagined in our new collection of building sets and collectibles.â€

Maryellen Zarakas, senior vice president of franchise management & marketing for WBCP said, â€œTogether with our long-standing partners at the LEGO Group, weâ€™re excited to bring Harry Potter back into LEGO form and expand the world with the addition of Fantastic Beasts sets. These new sets allow us to strengthen the emotional connection our fans have with the Wizarding World as they bring to life their favorite characters and memories from the films.â€

About the LEGO Group
The LEGO Group is a privately held, family-owned company with headquarters in Billund, Denmark, and main offices in Enfield, USA, London, UK., Shanghai, China, and Singapore. Founded in 1932 by Ole Kirk Kristiansen, and based on the iconic LEGOÂ® brick, it is one of the world’s leading manufacturers of play materials. Guided by the company spirit: “Only the best is good enoughâ€, the company is committed to the development of children and aims to inspire and develop the builders of tomorrow through creative play and learning. LEGO products are sold worldwide and can be virtually explored at www.LEGO.com.

About Warner Bros. Consumer Products
Warner Bros. Consumer Products (WBCP), a Warner Bros. Entertainment Company, extends the Studioâ€™s powerful portfolio of entertainment brands and franchises into the lives of fans around the world. WBCP partners with best-in-class licensees globally on an award-winning range of toys, fashion, home deÌcor, and publishing inspired by franchises and properties such as DC, J.K. Rowlingâ€™s Wizarding World, Looney Tunes and Hanna-Barbera. The divisionâ€™s successful global themed entertainment business includes groundbreaking experiences such as The Wizarding World of Harry Potter and Warner Bros. World Abu Dhabi (opening 2018). With innovative global licensing and merchandising programs, retail initiatives, promotional partnerships and themed experiences, WBCP is one of the leading licensing and retail merchandising organizations in the world.