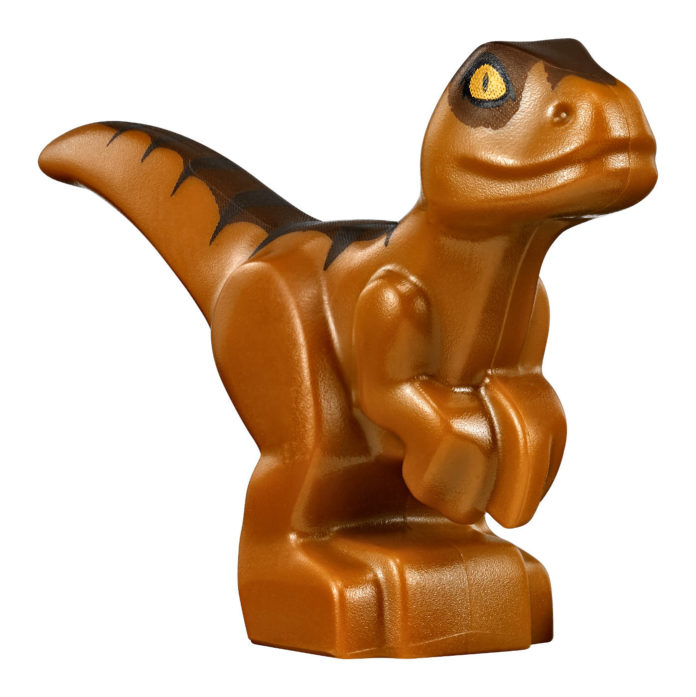 Yep. Pretty sure this is almost all of the building sets for Jurassic World not including any BrickHeadz or retailer exclusives. Prices and piece counts are included with the official copy for each set. These sets will hit store shelves in April. 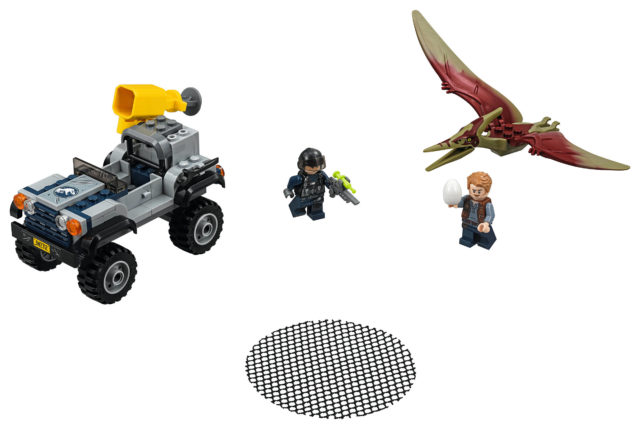 Time to evacuate! This Pteranodon needs rescuing from the erupting volcano but is a fast flyer, so help Owen and the tracker jump into the high-speed offroader and race across Isla Nublar to save it from danger. Retrieve its egg and fire the net shooter to bring the creature down. Then sedate it with the tranquilizer gun and prepare for your next mission! 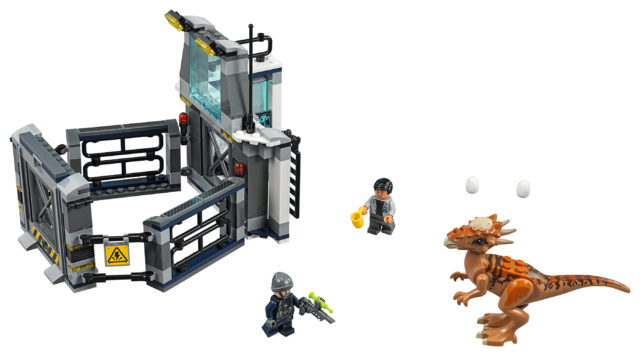 Sound the alert! The Stygimoloch has broken free. Help it smash through the lab door and cause mayhem by flipping the workbench over and smashing the window, then make a speedy escape. The guard won’t believe his eyes when he sees the Stygimoloch charging towards him, so call for back-up!

Watch out for the trap! Too late-Blue has been tricked into entering the cage after spotting food left by Wheatley and the pilot. Jump onto the quadbike and speed after Owen’s dinosaur ally before the evil hunters fly off with it in the helicopter. Fire the crossbow to stop them, set the dinosaur free and take back the stolen eggs-but watch out for the helicopter’s powerful 6-stud shooter. 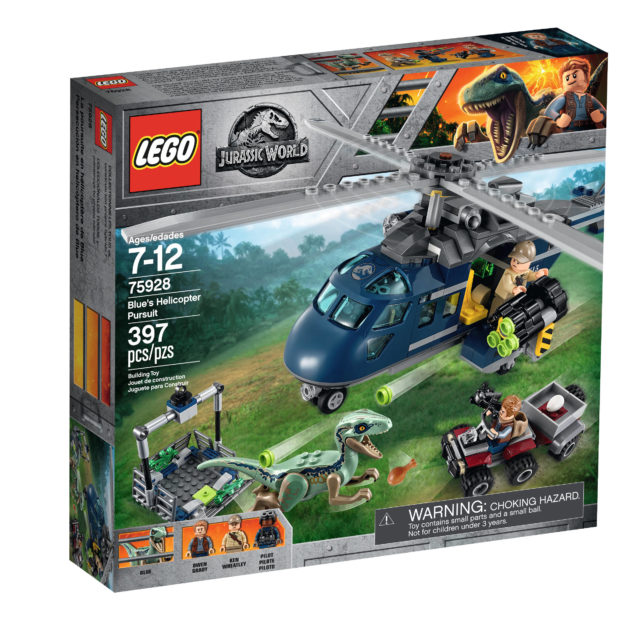 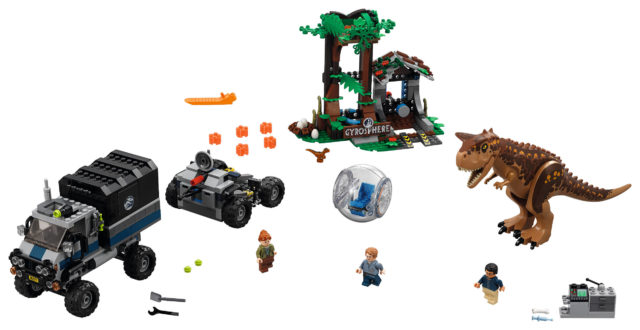 Run for cover! Things are getting hot on Isla Nublar as the island’s volcanoes start erupting and a deadly Carnotaurus appears. Hit full speed in the truck and help Owen, Franklin and Claire escape the falling lava rocks and rampaging predator. Hide in the mobile control center or launch the Gyrosphere, but don’t forget to rescue the baby dinosaur and its eggs before you go! 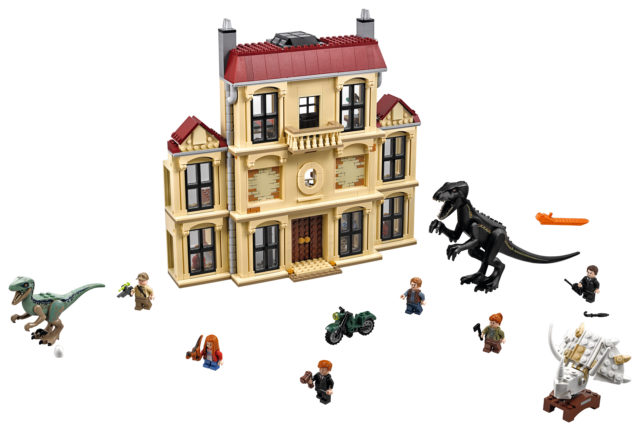 o The 3-level Lockwood Estate features an office, bedroom with bed, laboratory area with museum display cases and a collapsible roof.
o Indoraptor and Velociraptor feature posable limbs, head and snapping jaws.
o Also includes a buildable triceratops skull.
o Customize the estate using the configurable walls.
o Push the dinosaur heads through the windows to cause a smashing effect.
o Place the baby Velociraptor in the laboratory and run some DNA tests.
o Pull the lever to activate the collapsing roof!
o Weapons include a tranquilizer gun and an axe.
o Accessory elements include an auction hammer, umbrella and a dinosaur egg. 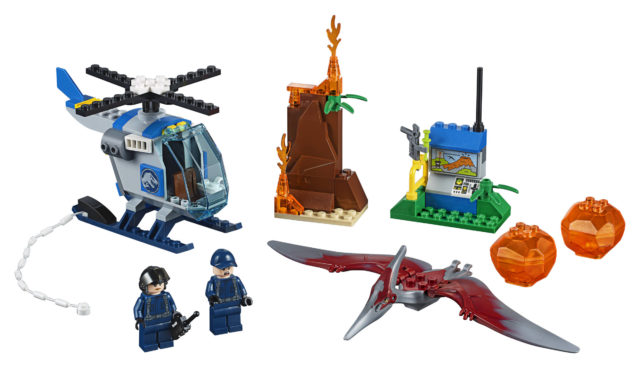 Watch out, the volcanoâ€™s going to blow! Keep an eye on the lava flow as you wait for the helicopter to come in and rescue you. There it is! Grab the rope swinging from the door and start climbing in. Better hurry, that lava ball is getting close. Hey, whatâ€™s that? That Pteranadon is flying in fast; can you get away before it catches up? 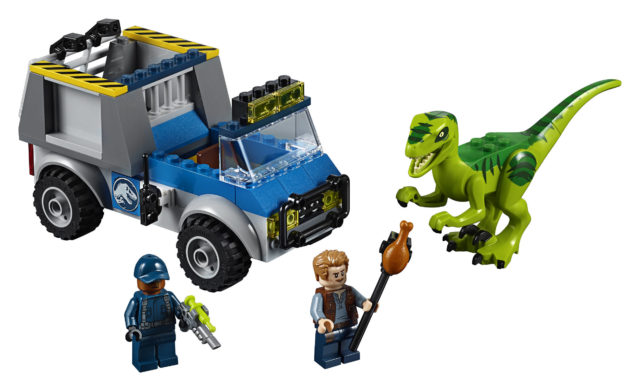 Grab the chicken leg and head to the truck! The volcano on the island is about to blow, and itâ€™s up to you to save the lost Raptor. Drop the cage on the ground and open the gate, and then attach the chicken to the stick and use it as bait to tempt the Raptor to the cage. Can you and Owen rescue the Raptor and get away in time? 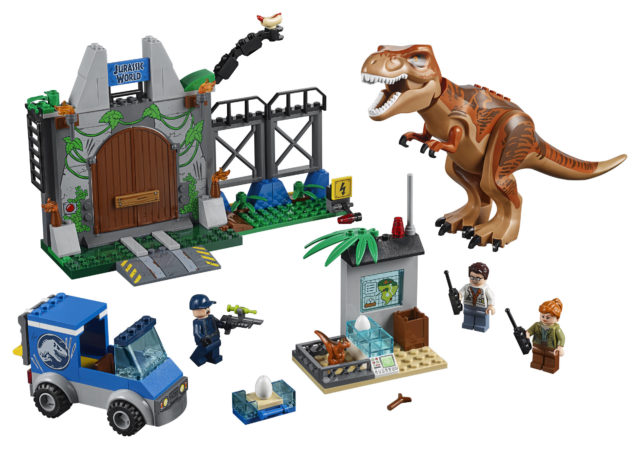 Watch the gates, thereâ€™s a T. rex on the loose! Help Claire and the scientist watch over the baby dinosaur and the eggs while the guard climbs the ladder to look out for the giant dinosaur. Load the hot dog onto the robotic arm and distract the T. rex away from the gate. Then load up the eggs in the back of the truck, open the gates and speed to safety! 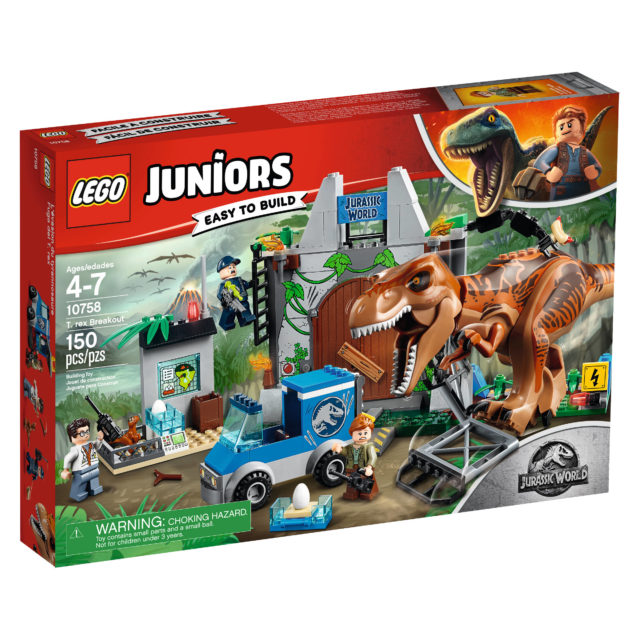 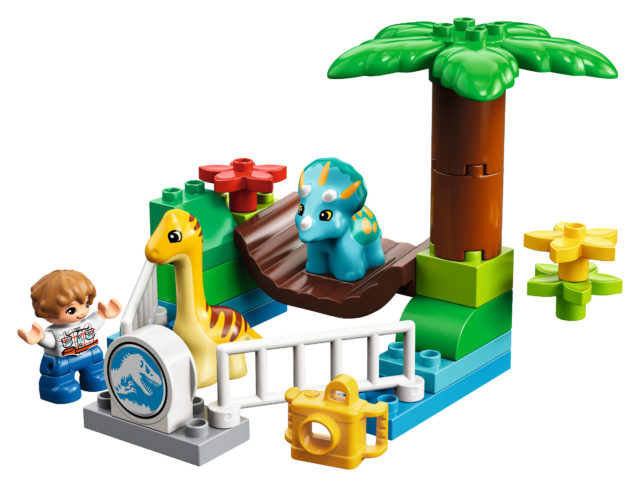 Little dinosaur fans will love to create endless role-play adventures as they visit the Gentle Giants Petting Zoo with this Jurassic World toddler toy. Help young children develop fine motor skills as they build and rebuild the baby dinosaur enclosure and help Gray Mitchell use his camera to snap pictures of the baby Triceratops as he stands on the swinging bridge, or the Diplodocus as he eats the vegetation. But donâ€™t get too closeâ€”baby dinosaurs can still bite! Includes a LEGOÂ® DUPLOÂ® Gray Mitchell figure plus 2 baby dinosaur figures. 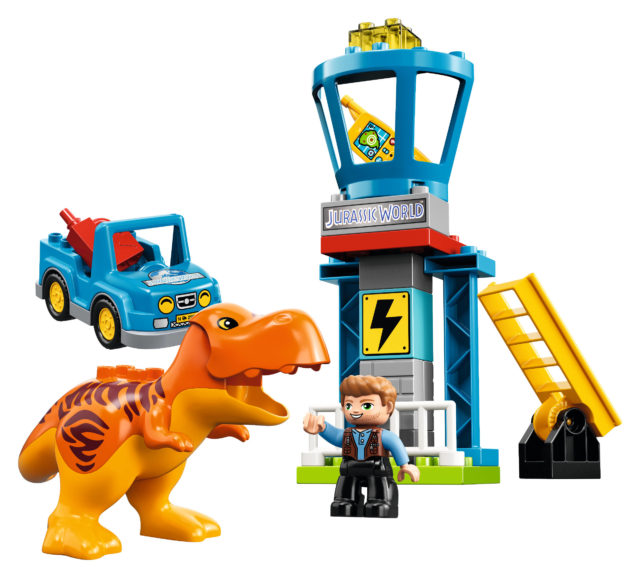 Enter Jurassic World with your child and recreate all the drama and tension from the movie, with this exciting set! Thereâ€™s a T. rex on the loose and itâ€™s snapping its jaws! Preschool children will love to help Owen Grady speed in with the car, face off with the huge dinosaur and make it safely into the turning control tower to call for backup. This easy-to-build dinosaur toy with large building bricks is great for creating endless role-play stories with a dinosaur theme. Includes an Owen Grady LEGOÂ® DUPLOÂ® figure, plus a T. rex figure.