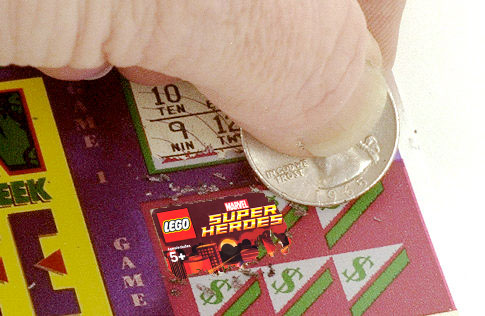 This email comes from Joy. No kids to speak of, just a huge fan of LEGO. Her logic made the most sense to me so I was happy when she wrote me. Her email is quite lengthy so let’s get right to it.

Let me start by saying that I did manage to get a full set of the Super Heroes minifigures, so this is not a sour grapes accusation. I believe that the people running the booth wanted to keep as many minifigures as possible off ebay, and I believe they went as far as choosing who would win the raffle to attempt to control it.

So what makes me so sure the “random” raffle was fixed?

1. The winning numbers were known before the drawing took place.

This is a huge red flag all by itself. I would guess that they would claim that this speeds things up later, but it is very questionable for the winning tickets to be known before the “random” drawing begins. The guy who runs this portion of the booth explained that all the tickets started out in sequential order, then they were dropped in a bag and shuffled. Since the winning numbers were parts of large blocks (for example 651-700), it would be very quick and easy to pull out all the winners prior to the “random” shuffle that supposedly took place.

2. Everyone who won a minifigure on Saturday got their ticket from the same person.*

Now everyone is probably a bit strong since I didn’t actually ask everyone who won, but of the dozen or so “random” people I asked after they claimed their prize on Saturday, plus the few that were won by people I know, all of them responded with “the guy on the right.” Not a single person who got a ticket from the guy on the left showed up to redeem a ticket. Of course, these results aren’t scientific by any means as I can only account for about 20-25 of the winning minifigures, but I do find it strange that not a single person from the people I asked and witnessed got their winning ticket from the guy on the left. I only asked people on Saturday and I think that raffle may have really been â€œrandomâ€ on Sunday.

3. You couldn’t pick your ticket from your choice of people or tickets.

I didn’t think too much of it has it happened, but on Friday I was told to “get your ticket from him (the other guy passing out tickets)”. Now I wasn’t intentionally trying to go to the guy on the right, but there was someone getting a ticket from the guy on the left as I reached the front to get a ticket. The guy on the right on Friday was the man in charge of running the raffles. He had tickets in his hand and I was standing right in front of him yet he wouldn’t hand me a ticket? I wasn’t the only person who was told to get their ticket from a different person. They said that they wanted to make sure people in the same group were getting a more “random” selection. If these tickets were properly mixed up to begin with, this idea doesn’t even make sense.

4. The guy on the right handled his tickets very suspiciously.

5. The employees kept mentioning how “random” the raffle was.

Are you tired of seeing “random” throughout this? That’s how I felt when I was there. I have no idea how many times the LEGO employees repeated to people that the raffle was random, but it was way more than was really necessary. Yea, I get it, it’s a raffle, it’s supposed to be random, it should be inherently random. The fact that you keep telling me how random it is really makes me question its randomness.

Now any of these things alone might not raise any suspicions, but all combined it seems very obvious to me that this raffle was fixed. It was very simple to do. The winning numbers were all pulled out ahead of time and placed in a small bag within one of the larger bags. Obviously, everyone who got a ticket from the guy on the right couldn’t get a winner since there were only around 200 winners each day, depending on the minifigure, and they passed out more than 1,000 tickets each day. So most of the time he was handing out losing tickets, but every so often he would pull out some winners and pass those out to people who, I guess, looked like they deserved a minifigure. I also found it interesting that a person questioned an employee about the randomness of the process on Saturday, they handled the raffle a little differently on Sunday. First, they gave an announcement that you could only go through the line one time, something they didnâ€™t announce the previous days. Second, they made a little more of a show of them mixing up the tickets in the bags before the ticket distribution started. Third, they actually scanned some badges to at least give the impression that you would only be able to go through the line once. These precautions make sense since on the previous days you could have gone through the line ten times but you were only going to win if they decided you were going to.

In conclusion, the LEGO presence at SDCC needs a lot work. If they want to give their minifigures away via a raffle, thatâ€™s fine, but it should really be done using a truly random lottery system. Personally, I think the raffle system is a waste of time for the employees and the attendees. If you want to control who wins the minifigures, just hand them out to people in the booth throughout the show. Donâ€™t waste our time standing in lines when we donâ€™t even have a legitimate chance of winning the item. The best solution is this â€“ give a minifigure to the first XXX people who come to the booth each morning. Hand them a minifigure, stamp their badge, and send them on their way. When the show floor opens each morning, attendees have dozens of options of what exhibitor to visit first. They all have exclusives and if an attendee is willing to skip Hasbro, Mattel, Bandai, Funko or whatever else is hot that year, then I would say that they are clearly a fan of your product and deserve the giveaway item.

This will be the last email I post. Tomorrow, I’ll follow up with my own commentary and observations on the whole system and what LEGO can do to fix it assuming, of course, they haven’t completely killed off doing promo figures in the future because of the backlash.