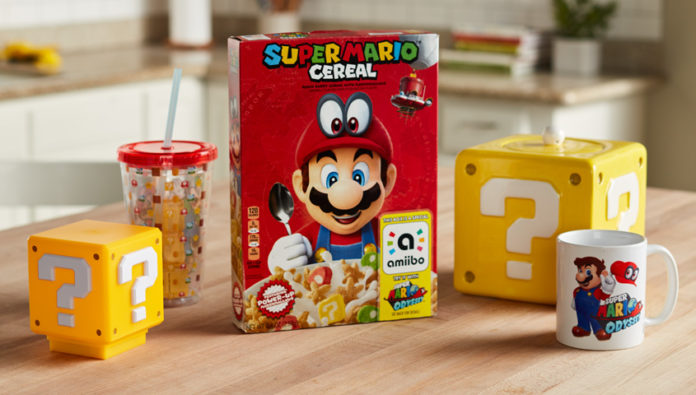 Update: The box has been found and a picture of the back is posted below:

Yeah, kinda weird but I can dig it. Nintendo has partnered up with Kellogg’s to create a Super Mario cereal. The cereal is themed after the Super Mario Odyssey game for Nintendo Switch. The cereal features “colorful power-up marshmallows and a blast of mixed berry flavor in every box.”

After you’ve inhaled the sugary sweetness, you can use the box as amiibo to get items in the Super Mario Odyssey game. Tap the box to the controller and you’ll get hearts or coins with each tap.

Nintendo’s probably the only company to get toys-to-life right. The toys are not tied to any one game and are pretty nice collectibles by themselves. They may have been one of the last companies to enter the field, but they are the only one standing right now. amiibo functionality has taken the form of collectible figures, and cards; now cereal box can be added to that list. But I’m pretty sure everyone’s just going to cut out the NFC chip though.

Availability for Super Mario cereal should start on or around December 11th.