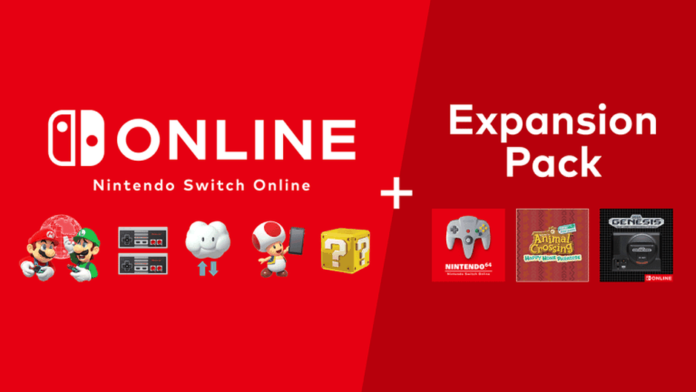 Some days… Nintendo makes it hard to be a fan, and makes it even harder to defend them as a fan. Not that any multi-billion dollar corporation needs, or should even get, regular people defending it. It’s easy to hate on Nintendo sometimes, because they so often do things that feel out of step with how the rest of the industry or just doing their own thing.

A lot of the time, it’s more that Nintendo is going to do their own thing and they’re not going to bend to expectations or chase trends. They’re not going to suddenly throw everything behind turning Splatoon into a Battle Royale Free-to-Play shooter, or trying to make Smash Bros. into a MOBA or something. Or, if they did, it’d be like ten years after everyone else had forgotten about those genres and somehow it felt fresh again.

Sometimes, though, they do chase a trend… and almost invariably, they do itÂ badly. I’ve talked about Switch Online before. It was something I mostly qualified as a “necessary evil” or “meh” at best. It wasn’t especially worth the money for what you got – access to Nintendo’s half-assed online implementation and a limited back catalog of NES (and later SNES) titles. Plus the right to purchase expensive hardware to put in your pile of expensive hardware that gathers dust and you wonder why you purchased every time you look at them. Looking at you, NES Joycons. You know it’s true.

Maybe that’s why, when Microsoft has basically set the bar absurdly high for what a game subscription service can be, and revitalized theÂ last generation of hardware when the next generation is nearly impossible to get… it feels so odd to see other companies lag behind it. Sony has basically held steady on what PS+ does (which is to say… not a whole lot), though they’ve also backed off their commitment to previous-gen updates and started to charge for them instead. Not that either company can actually get consoles out there, but you know.

Nintendo, on the other hand, is taking completely a different stance. They’ve put out a “new” Switch, the OLED version, that added a new screen, $50 to the price, and basicallyÂ nothing else. The old version of the Switch didn’t go down in price, even though at this point they’re likely able to build both systems for a pretty substantial cost savings (it’s likely that Nintendo is putting somewhere close to a 50% markup on Switch hardware at this point).

In early October, they announced an expansion to Nintendo Switch Online, adding the first N64 games to the system, along with a new Sega game library, because that’s what 2021 is. And a bit of Animal Crossing DLC that’s worth $25, but only so long as you’re paying for Switch Online. You’re getting some ROMs packaged in their app, classics like Super Mario 64 (again), Ocarina of Time (again), Mario Kart 64 (again… there’s a trend here), and others. There are only nine n64 games, and 14 Genesis games, not all of which will be available when it shows up on October 25th.

The problem with all of this? The cost. They’re adding $30 to the individual membership price, and $35 to the family (which is required to play any of these on more than one profile on a system), raising the cost of the plans to $50 and $80 annually, respectively. Let’s just call these prices what they are -Â absurd.

These are the same games, out again and again and again on previous platforms, or available through less legit methods to those who want to play around with emulation. Super Mario 64 had a remaster done in 3D All Stars, that was inexplicably put in a vault because of course it was, but it’s still available through retailers like Target because it seemingly didn’t sell all that well. Ocarina of time is the N64 version, which hasn’t aged well at all, and has a great remaster done on the 3DS which Nintendo hasn’t shown any real interest in releasing again. Mario Kart has a great Switch game, and none of the others really stand out. It’s all first-party classics, but curiously missing are Majora’s Mask, Smash Bros., Donkey Kong 64, and F-Zero X.

The real stars of the N64 were 3rd party titles like Golden Eye (which we know has a great remaster that Nintendo kiboshed already – done by Rare), Banjo-Kazooie, and Perfect Dark. Of course, the reason behind those may be somewhat obvious, as they were done by Rare, now owned by Microsoft. Both Banjo-Kazooie and Perfect Dark are on Rare Replay – which, should be noted, is included as part of Xbox Game Pass, but Microsoft has made no secret that they’d be more than okay with putting their games on Switch, or licensing stuff back to Nintendo. TheyÂ wanted to remaster Golden Eye, and would have likely wanted to put it on Switch as well as Xbox, and likely would have given the old games to Nintendo to package up in this new service as part of the payment.

But nope, we’re getting Dr. Robotnick’s Mean Bean Machine in a Sega Genesis package instead. And a the first two Sonic Games, but not the much better Sonic 3 or Sonic & Knuckles games. Golden Axe, which has been released so many times, Strider, and Shinobi III are in there… but it’s still only twelve games. Ironically, almost all of them, other than Ecco the Dolphin, and 38Â others, are part of the Sega Genesis Collection, which is coming to Switch in December and is already available on the other consoles for a flat $30.

So, you know… not a lot of value add unless you really want to play Ecco. A decent game, but not worth the price of admission. Ironically, all of these were available on what ended up being a commercial flop, Sega Genesis mini as well, which was marked down heavily in it’s final days (it was going for $25 at Gamestop in the end I think)… maybe Genesis games aren’t as big of a draw at this point unless you’re from Europe or fell on the losing side of the Console Wars.

Nintendo is again trying to leverage its name to charge a premium for less than what other companies are offering. There was a hope, when it first hit, that they’d be adding a lot of value to this library. No other company is sitting on the absolute vault of classic gaming content that they are and could put into these apps, first party or licensable-3rd party games… but that’s not what they do. Instead, we get these tiny drip feeds, every few months at best, of a game or two that often no one cares about.

There were 715 NES games released in the lifetime of that system, and only 58 have made it to the Switch service. There were 1750+ SNES games, and only 48 have been released on Switch Online… and there are some notable missing titles in there, like anything from Square (including Super Mario RPG or games like Chrono Trigger, Final Fantasy, etc). I’m sure there are all sorts of licensing things tied up in it, but since that’s the rumor behind the price hike, and they’ve clearly licensed SEGA titles, you know… it’d at least feel like they put effort into it.

Instead, what we get is Nintendo putting the bare-minimum into another offering, and giving us something that’s been sold many times before on other systems. Often to the same people. Even those Genesis classics are plastered on every other system, and have been a throw-in title in multiple Humble Bundles or a frequent target of Steam sales on PC. I’m sure there are people excited to have them out there… but it’s hard to see who can get worked up enough to overlook the huge price increase. 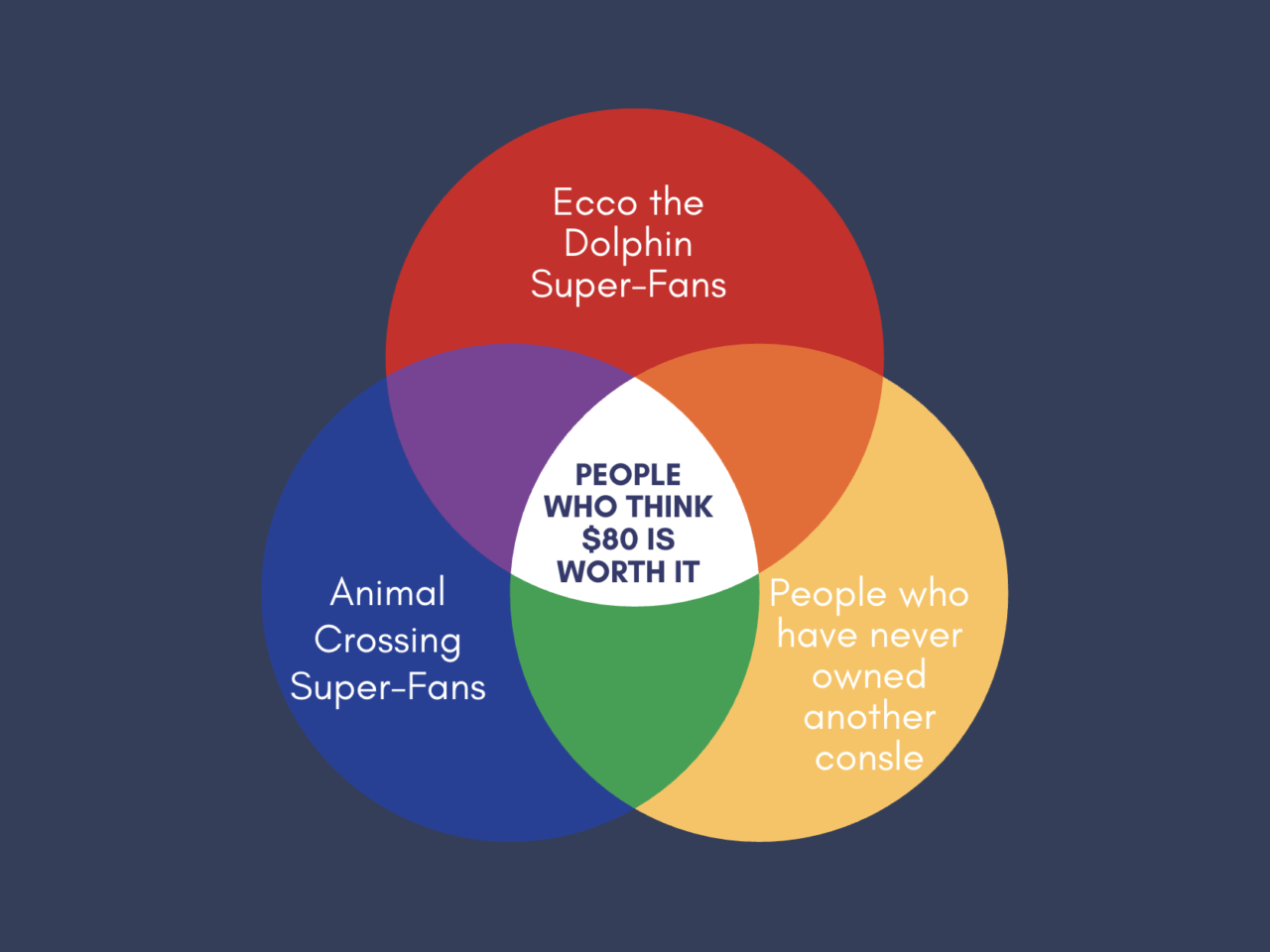 I’m certain there’s a big ven diagram somewhere of “Animal Crossing Fans” and “People who Really Want to Play Ecco the Dolphin on Switch” that are the perfect market for this… but given at this point they’re just locking older titles behind a wall to force a subscription. The online services Nintendo offers aren’t great or useful in the best of times, and they still don’t have the most basic features like chat or voice support (I mean, they just added bluetooth audio in the last month).