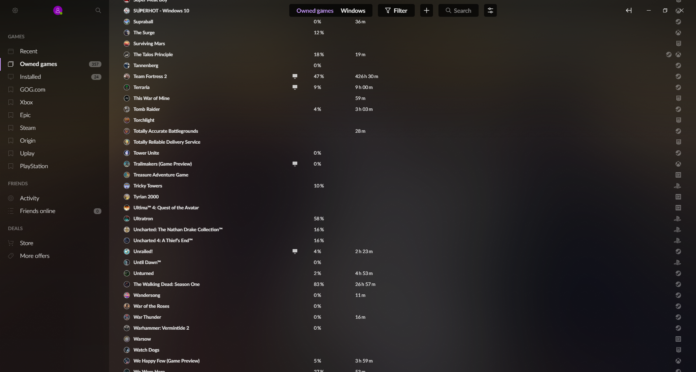 I’ve been trying to make it a point to not buy any new games until I’ve finished some older ones. I’ve been pretty good about that, meaning there was a long stretch where I didn’t buy squat ’cause I wasn’t completing any of them. I did make a few exceptions though, most notably Final Fantasy VIII Remake and The Last of Us Part II. I was playing Resident Evil 2 when FFVIIR came out, and then I was playing that when TLOUPII came out. This is how backlogs grow. But now that I have the platinum trophy for TLOUPII, I can backtrack through FFVIIR and then probably RE2 after that. In between TLOUPII and FFVIIR I finished Journey which was pretty satisfying in a lot of ways. Huge production games are fun and all, but the amount of time some of them require can be a bit of chore, especially if you want to get all of the trophies. Journey was not one of those kinds of games but that is not a slight in any way. It was short, beautiful, and you can get all of the trophies in 2-3 runs with each run lasting a few hours.

I wish more games didn’t require multiple playthroughs to 100% the game. God of War was only one, HZD was 2. I know FFVIIR requires 2. Resident Evil 2 requires like 8, 4 with each character. I may or may not be exaggerating on that last one, but if I could just let go of trying to get that Platinum Trophy I’d probably be able to get through my backlog much faster.

And that’s my main roadblock. It’s not enough to just play the game and get to the end credits. I like getting the trophies and some of these games require a second playthrough and if I don’t do them back to back, I probably won’t ever bother. The Tomb Raider games were some of the first ones I completed on the PS4 and I always intended to go back and get the trophies I missed, but I’m okay with not doing that at this point because they are so far down the backlog list I’d rather play something new than something old.

The Backlog is daunting, but having played Journey after completing TLOUPII before going back to FFVIIR again makes it feel less so. Low hanging fruit like that can really help motivate and make working through The Backlog seem achievable. I may need to finally play Untitled Goose Game after FFVIIR just to cleanse my palate before taking on the next triple-A title.

And mind you, this is just on the PlayStation. On the Switch side of things, it’s more of the same except my main roadblock is Splatoon. I’ve been bitten by the bug yet again ever since the last Splatfest. I still need to finish BOTW, Hollow Knight, Cuphead, and probably a couple of other games. Thank God there’s no system-wide trophy system there. Makes it easier to not obsess about fake points like that.

I’d like to give Eric some crap for talking about Call of Duty: Warzone and saying that it’s taking up all of his time… but I’ve been playing Call of Duty: Modern Warfare multiplayer pretty consistently since I picked it up during a sale earlier during #pandemic2020. I know it’s easy to bag on the game, and it rightfully deserves it a lot of the time… but there is a fundamentally satisfying gameplay loop there. If only i could look past most of the business practices of tying in a bunch of microtransactions to unlock most of the game (though, thankfully, lootboxes are dead in there).

Honestly, that’s been a huge chunk of my gaming time. The big three that I’ve been playing have been Animal Crossing: New Horizons, Magic the Gathering: Arena, and Call of Duty: Modern Warfare. Yeah… that’s a combo of gaming. Honestly, I’ve been a bit burnt out on gaming in general lately, and just settling into comfortable routines.

Not that being in a routine has stopped me from getting new games. I’ve picked up several, new and older, with full intention to play. Despite being trapped in my house, though, I haven’t had as much time as I’d like to play. Some of it is just the general quarantine malaise, but also we have only one big TV to share between the two adults and two kids trapped in the house (and no room to really get another one, so not like I could go change that).

My backlog is stupidly large at this point… Steam says I have 1073 games available, and I’ve probably only loaded a couple of hundred of those, tops. While my Switch, Xbox, PS4, and other services aren’t that big… they are there too. During the Steam summer sale, I got all of the Final Fantasy titles that I didn’t have on PC already, but haven’t even installed them.

Honestly, almost all of my focus needs to be on the PS4 before the next generation comes out. Final Fantasy 7 Remake and The Last of Us Part 2 both sit unfinished. I really liked one of those and just got busy, while the other just wasn’t clicking with me and I haven’t felt like returning to it. I’m also pretty notorious for not finishing games, given that I don’t know if I ever finished Horizon Zero Dawn and Spider-Man in full before eventually just watching the stories on YouTube.

Death Stranding and Ghost of Tsushima are both there, completely unplayed. Ghost, in particular, is one that I really want to visit, as I liked the inFamous games and Sucker Punch as a developer. These are just the games I can think of off the top of my head… my PlayStation hasn’t been getting a whole lot of love lately, despite me having a comfy and lovely new couch to sit on and play it.

On the Switch, I played a little bit of the Pokemon Sword and Shield expansion before getting distracted at paying off that jerk raccoon who takes credit for all of the civic development I handle. There’s plenty I want to play on here, like playing through Saint’s Row III and IV again, and I really want to try out Trials of Mana (and go back and play more of the other two games).

On the Xbox… which really is my PC, since I use Game Pass for the most part… there’s not a ton. I’ve played a bit of No Man’s Sky on and off. It’s drastically improved but still not something I play for more than a few days. I need to go back and play The Outer Worlds again, since DLC is being teased.

I’d like to say I’m better at finishing games than the other two, but then I look at how many games I own. 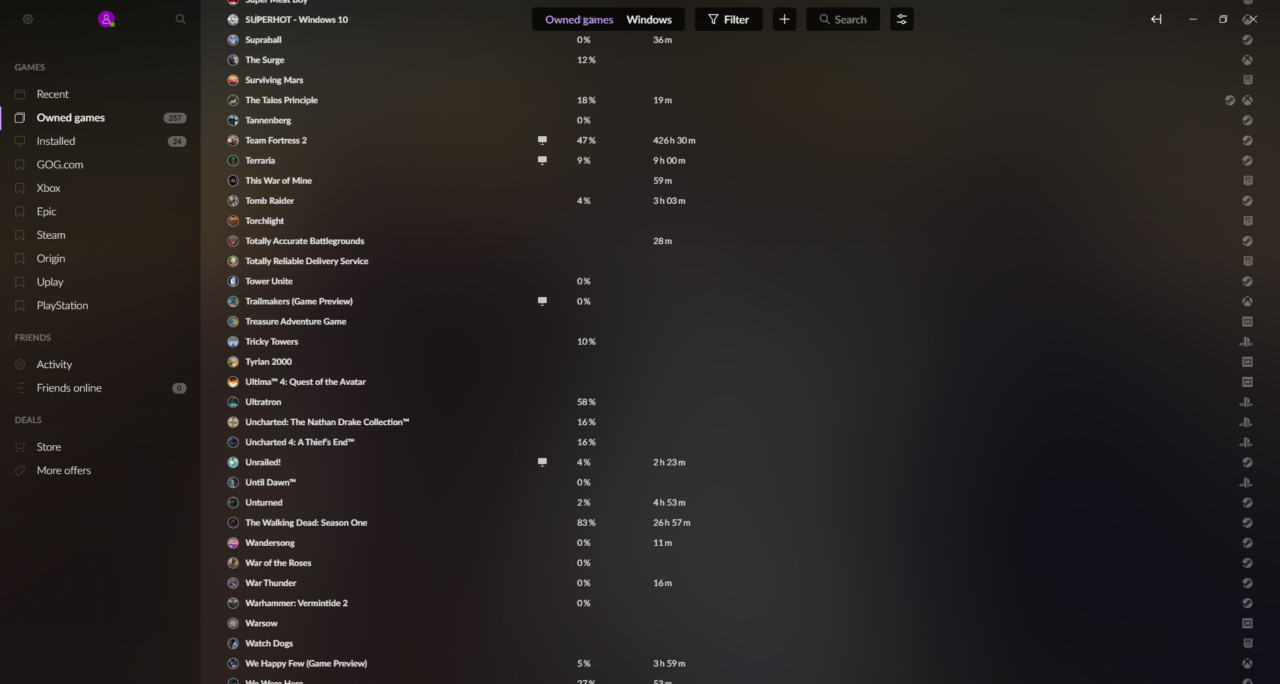 A few months ago I connected all my gaming accounts under GOG, and was shocked at the number of games that not only I hadn’t played, but that I’d straight up forgotten about. I got really into Humble Bundle three years ago, and kinda just horded up. Honestly, I doubt I’ll ever play most of those games. And all these launchers giving out free games, like Epic games, or GOG, or, rarely, EA Access, and I’m accumulating more games than I can play. Did IÂ need a free copy of Watch_Dogs? Nah, but maybe one day I’ll play it. (I won’t.)

Anyway, on to the games that I actuallyÂ canÂ remember, but can’t seem to find the time to play.

Man, I love everything about Resident Evil, but I can’t seem to get over the hump that is Resident Evil 6. Every time I start it, I just get so…tired. I managed to slog through Resident Evil 4 and 5, but something about 6 is breaking my spirit. Which is a shame, because I have two games after 6 that I’m genuinely excited to play: Revelations 2 and Resident Evil 7. Plus, Resident Evil Village coming out next year. But I keep bumping RE6 further and further back. At this point, I may as well skip it.

I’ve made my feelings about this game fairly clear over multiple articles, but I’ve yet to finish it. Every year or so, I’ll restart the game, get really into it for a few hours, forcing myself to start exploring in a new area each time, and then…fizzle out. Maybe it’s just that exploring gets old fast, especially the more you do it, but I can never bring myself to get anywhere close to marching up to Hyrule Castle.

Unlike Nick, I’ve actually played Death Stranding. Like Nick, I haven’t finished it. I put in about 20 hours into the game, and I felt like it lost some of the challenge. Spoiler, I guess, but you get things that make your deliveries way,Â way easier, which kinda negated the whole fun for me. You get to the point where you can just drive a car around, and that’s not really the walking simulator I signed up for. I know it’s a controversial opinion, but I honestly loved the challenge of walking on rugged terrain, judging it, and having to use the tools I chose to overcome it. It was a really peaceful experience, and the roar of a truck engine isn’t nearly as relaxing as the pitter-patter of Norman Reedus’ feet.

I think the biggest detriment to backlogs, for me, is podcasts. Much like games, I have a huge backlogs of podcasts that I will definitely never catch up to, but I like to sink an hour of gaming while listening to a podcast. However, I can’t do that with every game. Rocket League, yes. Dragon Age: Inquisition, no. So it’s really a battle between my podcast backlog and my gaming backlog. And the podcast backlog wins nearly every time.