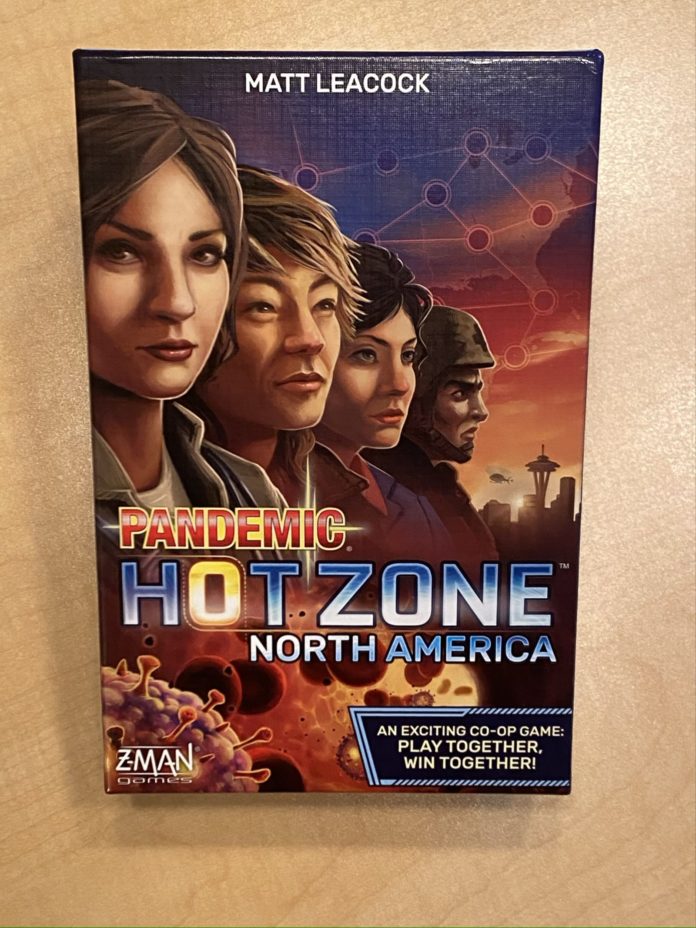 I really like playing Pandemic. One of the initial reasons I was drawn to it, not gonna lie, was the 10th Anniversary edition. It’s gorgeous and thematic and presses all the right buttons for me. I walked into my local game store and saw it on the shelf and was just wowed by the packaging. The store even had the bonus painted miniatures and offered me a 20% discount so I immediately pulled the trigger and don’t regret it one bit. I knew very little about the game before that so I wasn’t exactly sure what I was getting myself into. And what I was getting myself into was a whole lot of losing. It’s not an easy game to win, and it being a cooperative game, it shouldn’t be. I lost way more times than I won, but that made each victory all the more satisfying. Being a co-op game, you really have to think and coordinate with your teammates to exchange cards and at the same time adapt to changing conditions. Pandemic: Hot Zone – North America was designed to be smaller and play faster with all of the challenge (and frustration) of the original Pandemic in half the size. 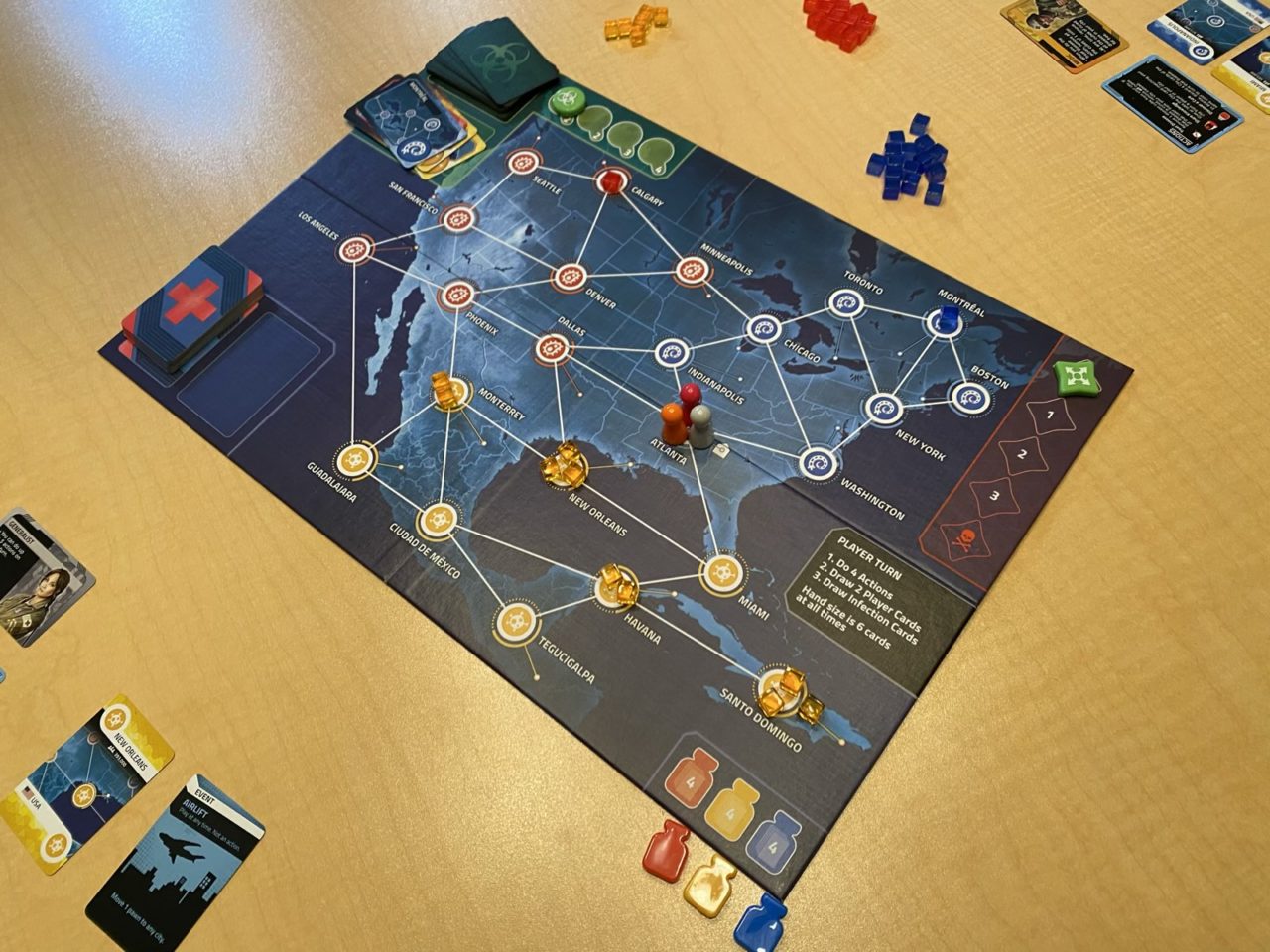 It’s a bit difficult to summarize how the gameplay in a Pandemic game actually goes but I’ll give it a shot: Disease is spreading around the world. Infection in any one city is indicated by placing one or more “disease cubes” on that city. You take on one of seven roles in a disease-fighting team with each role having unique special abilities. You can move from city to city through various means to remove disease cubes or meet with a teammate to exchange cards. Your overall goal is to find a cure by getting five player cards of any one color, and then researching. Do this for all four diseases and you’ve won the game.

Despite my Cliffs notes version of the gameplay, it still may be hard to understand exactly what is going on so here’s a How To Play Pandemic video:

And I even found one for North America:

I have no affiliation with this channel. I just found them pretty straightforward and not annoying like some other videos. Having these video resources on hand helps a lot in addition to reading the rulebook.

Pandemic: Hot Zone – North America is a bit less complex than the original game: the map is smaller, there are fewer roles to choose from, there are no research stations that can be built so all cures must be found in Atlanta (home of the CDC), there’s one less disease to fend off, and a couple of other small differences. Despite it sounding like there’s less game in the box, it doesn’t diminish the game play at all. You’ll still have to strategize with your teammates and coordinate card exchanges and movement to succesfully find a cure. I wish there was more of an emphasis on this part of the game; I think the trap that we keep falling into is that we’re very focused on removing disease cubes from cities to prevent outbreaks that we often forget that the point of winning is to find cures, and to find cures you need to exchange cards, and exchanging cards takes a whole lot of effort. 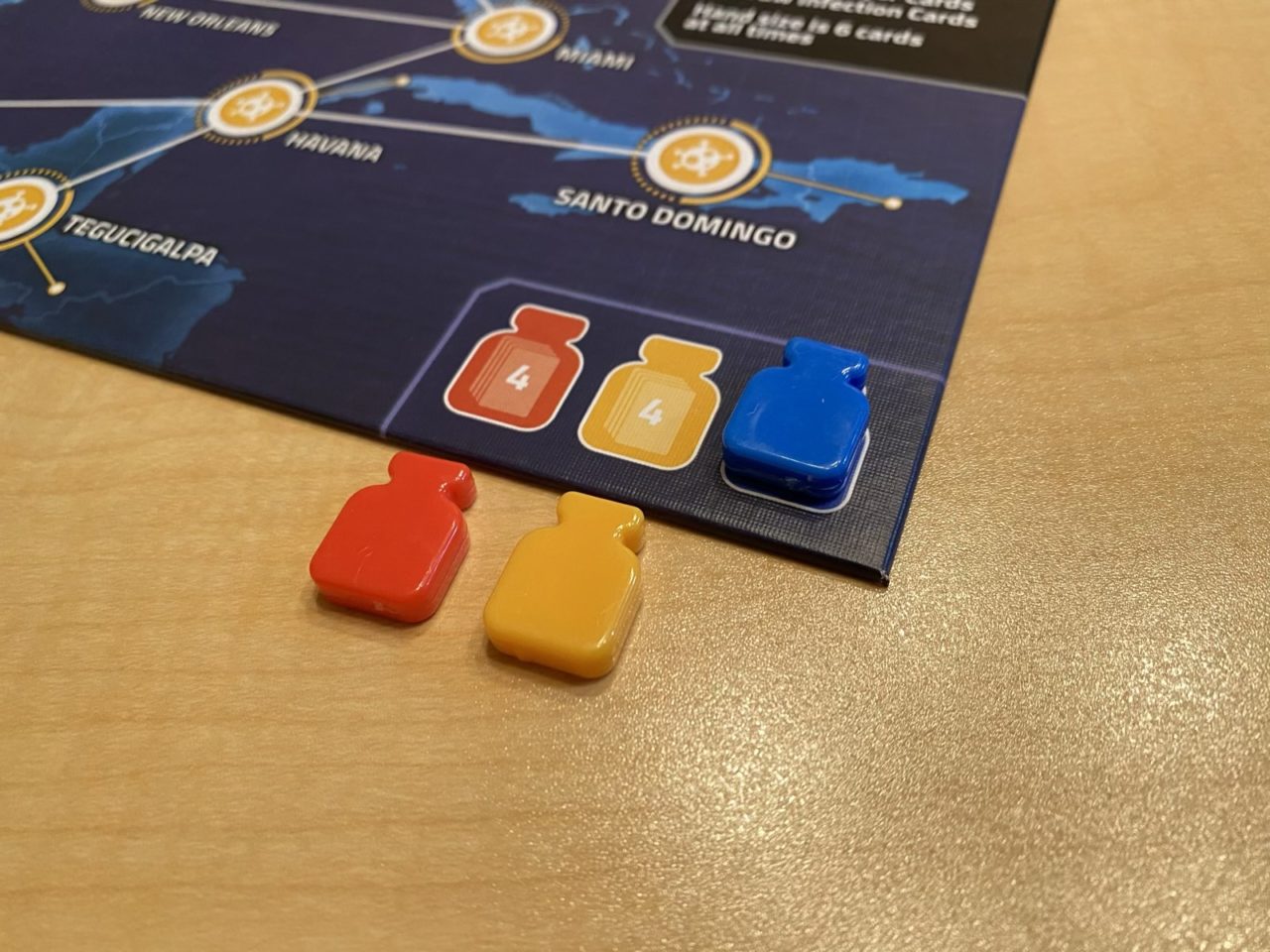 But man, when you do put in that effort and plans come together, it’s pretty satisfying. Finding a cure allows you to remove whole stacks of disease cubes from a city instead of just one if you’re not the Medic. This is key in preventing the possibility of an outbreak. Even after finding one or even two cures, you still have to act fast because the Player Cards deck is finite and taking turn after turn will burn through that deck rather quickly. And if that happens it triggers a losing scenario. Players will have to start planning right from the get go and make every move count. You need to in some way make moves to meet with other players every turn. 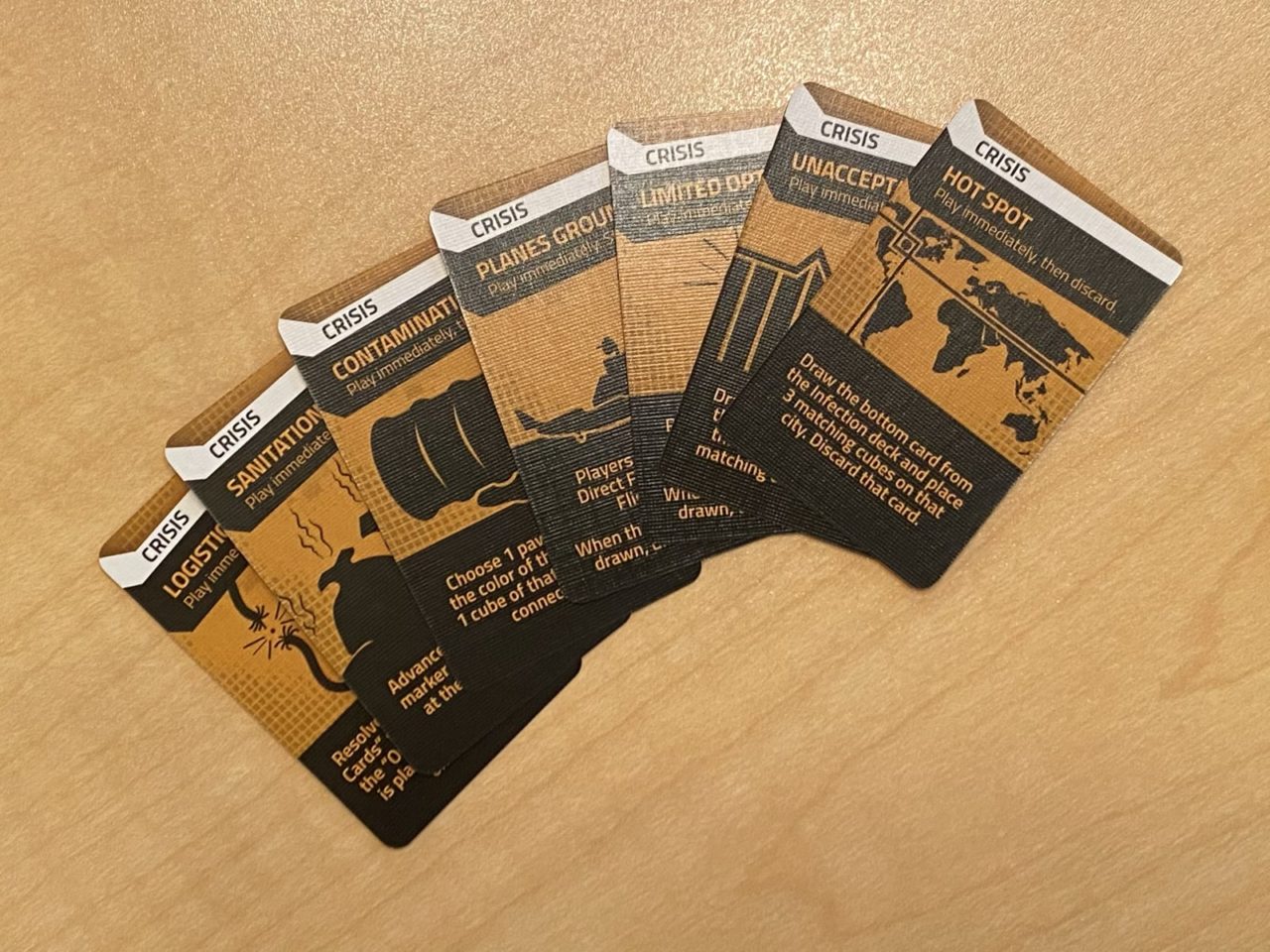 I’ve lost more times than I’ve won, but those victories, as few and far between as they are, are so, so sweet. Granted those wins were in “easy” mode if you can even call it that. Once you feel like a bunch of disease-defeating badasses, you can add certain Crisis Cards to the player deck to add additional levels of challenge and increasing the game’s replayability and longevity.

Because of how complex this game it, I really don’t recommend it for little kids. The suggested age for Pandemic: Hot Zone – North America is 8 and up but I’d bump that up to 10 so that you’re coaching less and playing more. Games finish in about 30-40 minutes compared to the 45-60 minutes of the original. 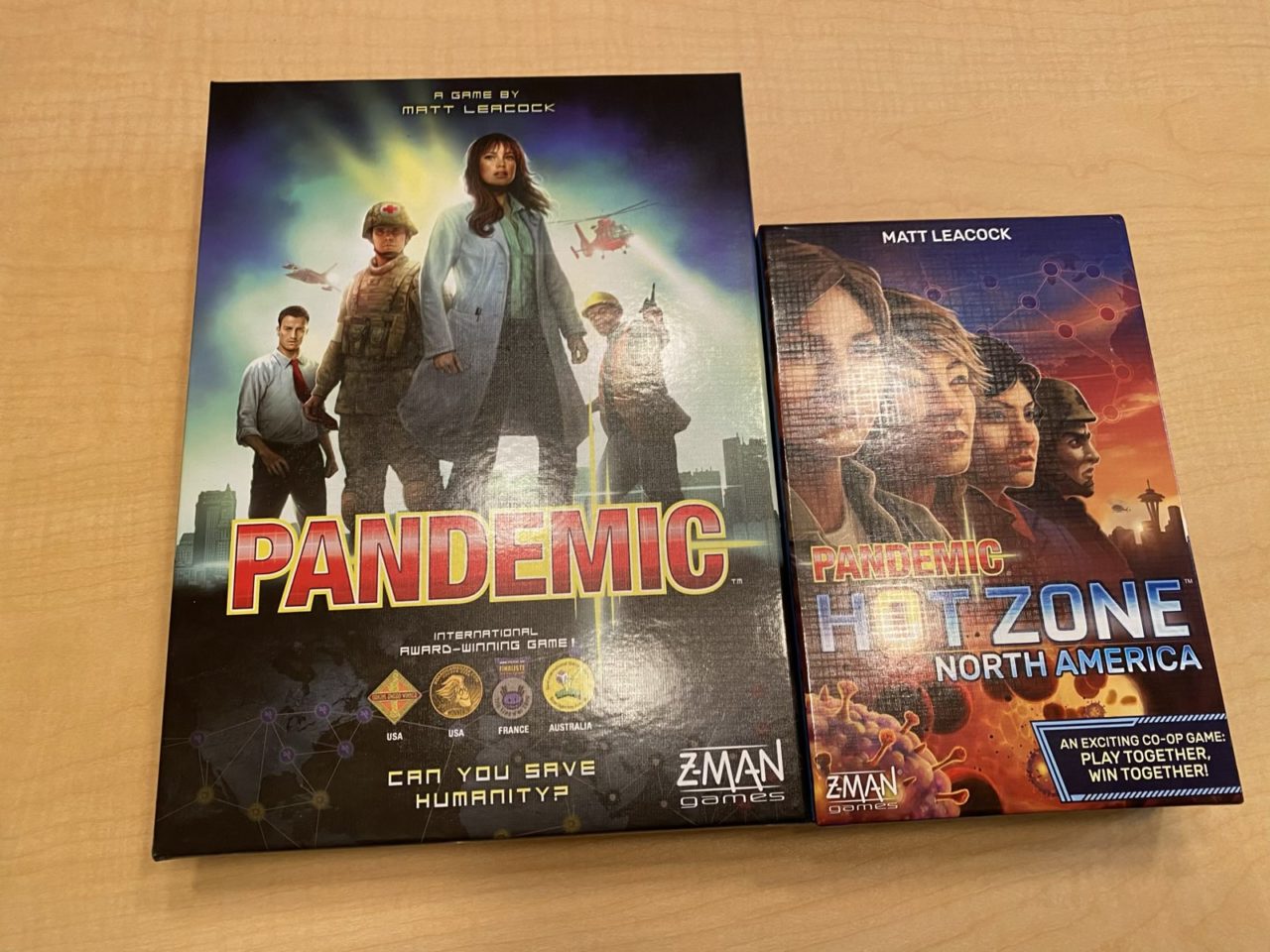 The physical size of Hot Zone is half of the original game’s box. The cards themselves are the smaller European sizes making the whole thing much more portable than the original. It includes resealable bags to keep all the components together and tidy so they’re not flying around the inside of the box. The portable nature of the game makes it a no-brainer to take along on any overnight trip.

With all of the above points added up, I can’t really find any huge faults with this game so a 5 out of 5 it gets. If co-op games aren’t your thing, this is probably pretty low on your radar. If you’re still not sure you want to pony up the twenty bucks to buy the game, there’s a print and play version of it on the Z-MAN website so you can try before you buy. I’ve had a lot of fun with this game and you will too.

Pandemic: Hot Zone – North America currently available at Target for just $19.99. Click below to buy (or not buy) a copy. Every purchase after clicking through supports this site. 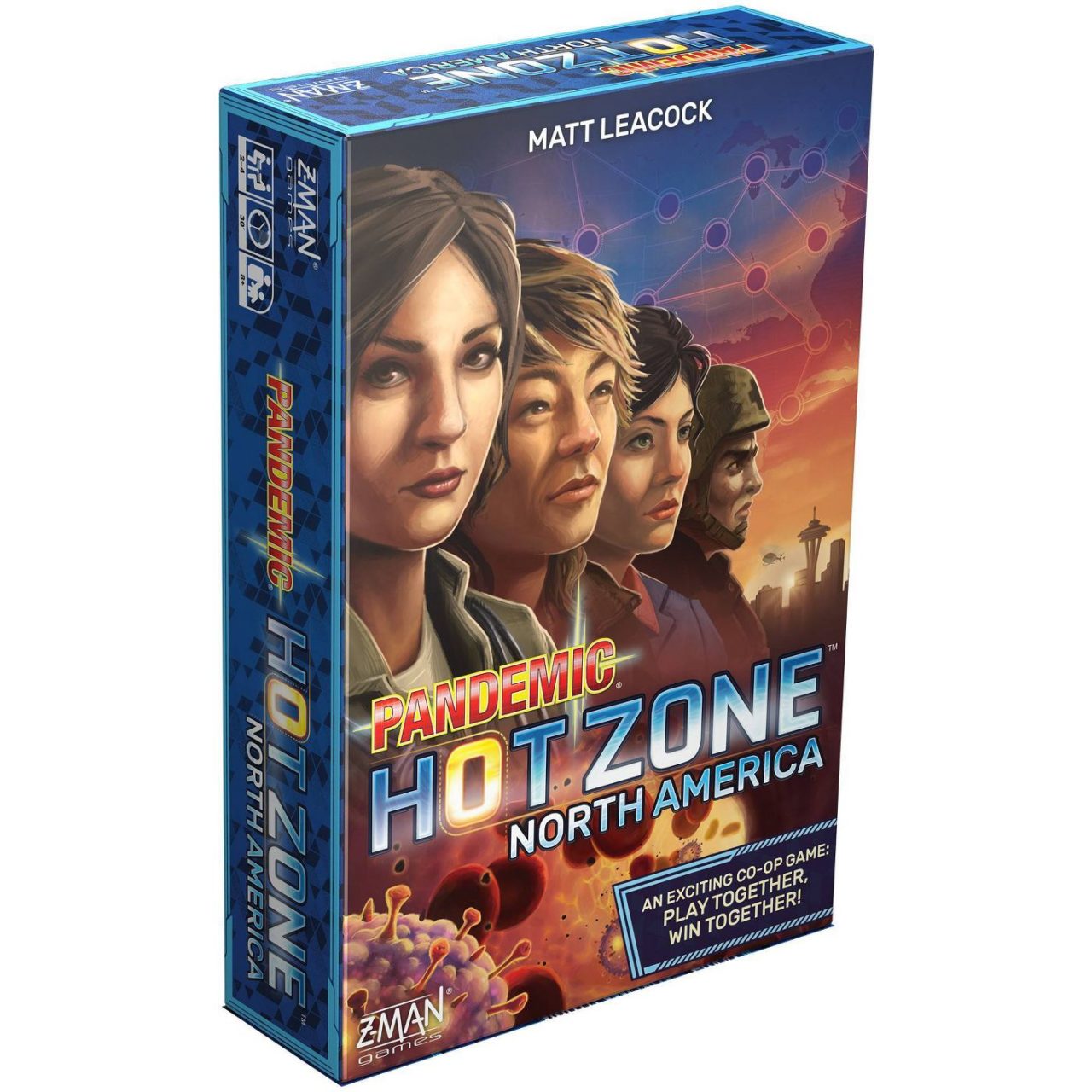 Like the review? Consider helping FBTB keep the lights on by donating or becoming a subscriber. We get very few review copies sent our way these days so we rely on ads, affiliate fees, and donations to keep going. 100% of the money goes towards operational costs and set purchases for reviews, giveaways, and contest prizes. As always, we thank you for your continued support.

For the record, Z-MAN Games did NOT provide us a copy of the game for this review.