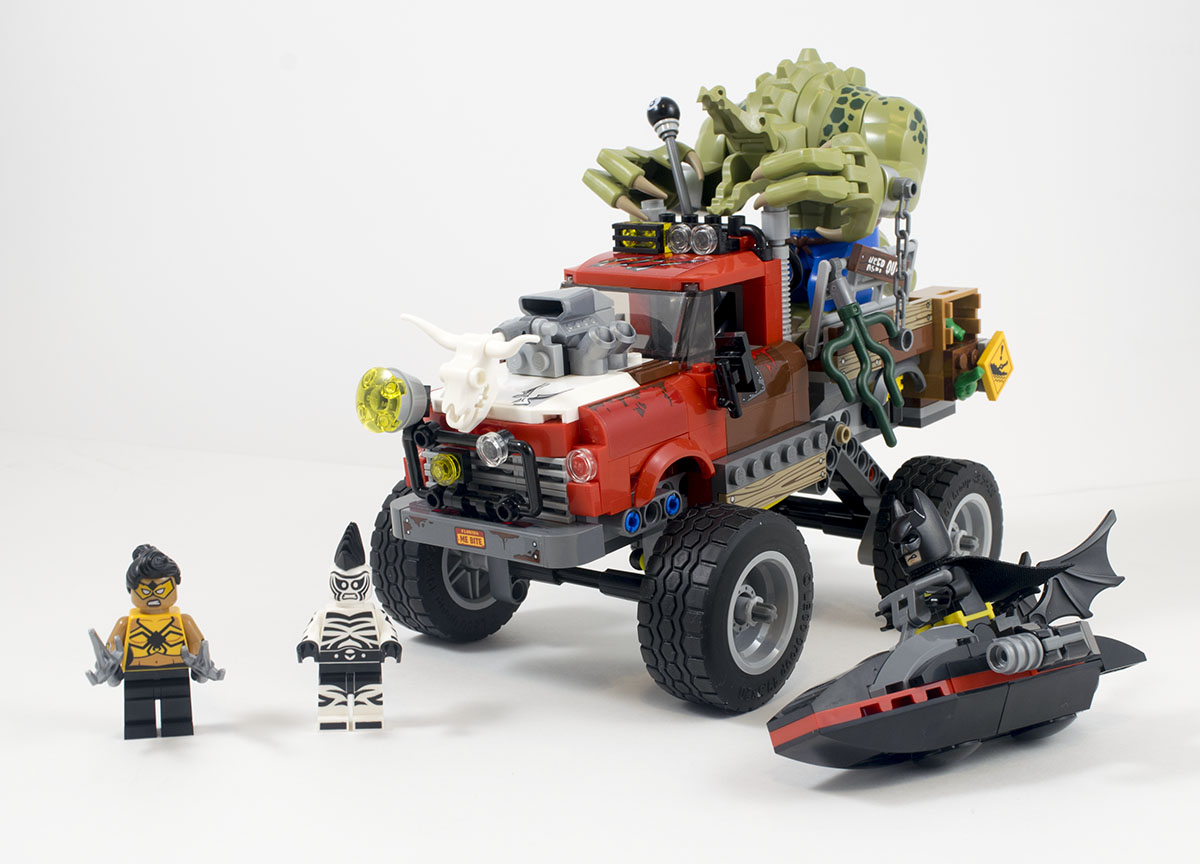 You know, I own a truck, and while I’ve certainly used it to haul a number of things, I don’t think I’ve ever felt the need to extend all of the controls for the vehicle out the back of the cab and into the bed. If I needed to do something like that, I’d probably just reconsider my vehicle choices and go for more of a rocket-sled sort of affair. Look, practical doesn’t mean you can’t be stylish.

Killer Croc is a weird villain in the lexicon of Batman… I’m not sure any other character has gone through more physical and artistic revisions. Originally, he was just a guy with a birth defect that made him look like a crocodile (backstory is that he was a wrestler that wrestled crocs), and more than once over the years, he’s looked like that again. For all of the failings of Suicide Squad (and there were so many), one of the things I think they got right was the look of Killer Croc. I mean, he was basically a prop otherwise, but he looked close to his roots. In more recent years, he’s taken more of a look like a lizard over a crocodile… butÂ I think that’s more the fault of the fact that crocodiles and humans just look really different.

One of the main reasons I decided to review 70907 Killer Croc Tail-Gator is that I haven’t picked up the other set that’s currently available with a version of Croc. I should, because it has Katana and Captain Boomerang, but it’s always been pushed to the side as I’ve been filling in my goal of having six hundred of the same Batman minifigure. This set is only $69.99 and a slight 460 pieces, continuing the unfortunate trend of a Bigfig costing us a good 100 or so parts off a set. This is the most expensive of the cars in the movie line, with the least number of parts… and it is sadly missing a Bat Kayak. In short, this truck better have some good 4WD, because it’s got a pretty tough hill to climb.

If you don’t get the Bat Kayak reference, you should go watch the trailer for the movie a few times. I don’t remember which one, so you should probably go through all of them, but it involved Robin nerding out over the insane vehicle selection in the Batcave. It was the sort of thing that I really wish would have made it into a set as a referential joke, instead of just copy/paste of some of the normal vehicles. But I think that LEGO is too busy ignoring our requests at a proper LEGO Movie Batwing to hear the demands for a Kayak. 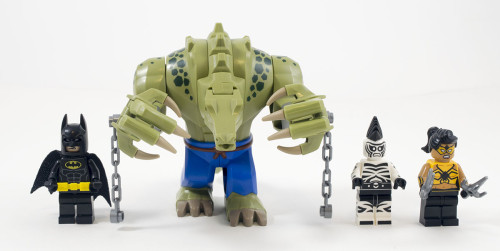 The description for the minifigure lineup in this set has me wondering about the characters in it.Â I mean, Batman and Killer Croc are obvious, but Zebra-Man (who has magnetic powers that have nothing to do with zebras… I’m pretty sure the writers weren’t even trying at that point) is in that realm of esoteric that we’ve seen in a lot of sets. Worse, Tarantula isn’t exactly a villain… I mean, she’s a terrible human being and hasÂ probably done more evil things than most of the villains in the DC universe, but she’s more gray area vigilante. More than that, most of those evil things were done to Nightwing, with whom she is connected. 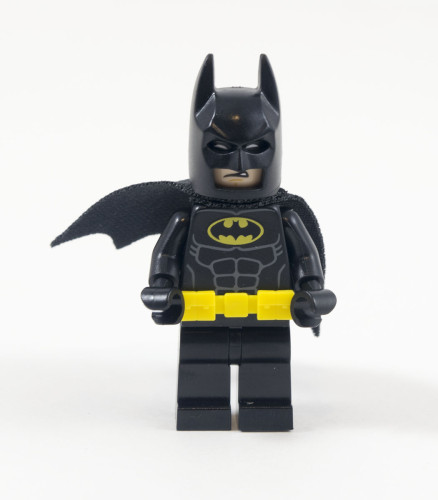 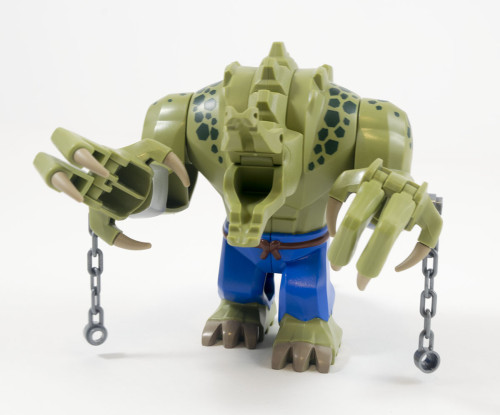 This Bigfig version of Killer Croc certainly has the Croc part, which is what we’ve seen in some of the more recent comic appearances… kind of. The other version that’s available is probably a more accurate representation, where he looks like the Goombas from the Super Mario Bros. movie (which, if you haven’t seen, is worth watching… while very, VERY, drunk). My headcanon really likes that, since I can imagine that Bob Hoskins exists within the DC universe at that point.

Even as Bigfigs go, this guy is weird. Those monstrous hands compared to the rest, though I get that makes sense, since crocodiles are known for their gigantic crushing hands, just like the T. rex*

*Â T.rex’sÂ tiny armsÂ were only tiny relative to the rest of him, and were actually fairly absurdly strong for their size, and could totally beatÂ Lincoln Hawk at arm wrestling. 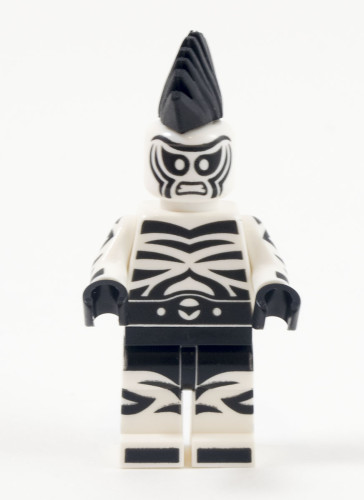 I’ll be honest, I know nothing about this guy,Â mostly because he was a clone of a villain that appeared (and died) in one issue in the 60s, and the clone only showed up in a few issues that were in the Outsiders. It’s okay if you don’t remember the Outsiders… no one really does. The 80s were a weird place. His power set is a bit strange, given that it’s around magnatism, and has nothing at all to do with being a Zebra. I’m not sure if they ever explained the costume choice and how it links to Magnets, but I’m going to go with he was bitten by a radioactive Furry. 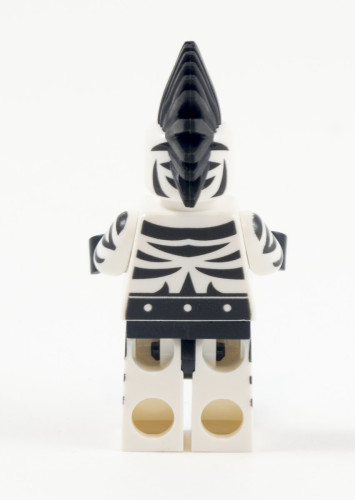 The character sort of appeared in the New 52, but that version was called Vortex and was about as esoteric as the rest of the villains. Unlike pretty much the rest of the characters in the LEGO Batman Movie sets, I don’t think this guy has shown up in any other shows or video games (at least not as anything more than an illusion or background cutout). Not a bad figure, but a weird one. 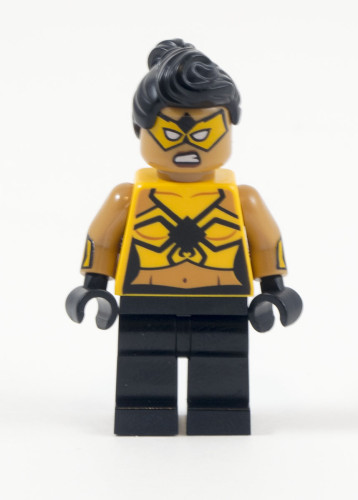 Tarantula is a much more problematic character to include in a any set. First… she’s a sexual predatorÂ and a murderer (those two are actually related). While Batman has the whole “I won’t kill you, but I don’t have to save you” ethos until he sees a horse while standing in a dust cloud, Tarantula adopts more of a “No, I’m totally going to kill you” attitude. She used to be an FBI agent, and then went vigilante, and has more than a few brushes with heroes that thought she took her methods too far. 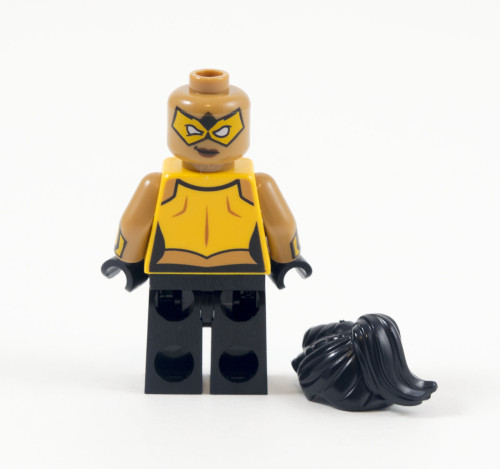 Yet most of the time, she was firmly in the camp of “doing good in all the bad ways” area of comics, so it’s a bit weird to see her show up here. Unless of course they’re going to do a sequel to this movie, turn Robin into Nightwing, and boldly go into territory that no LEGO movie should ever go. I do have to hand it to these sets though for giving us some female villains not namedÂ Catwoman, Poison Ivy, or Harley Quinn, but I’m very curious how they’re going to spin this character in the movie. 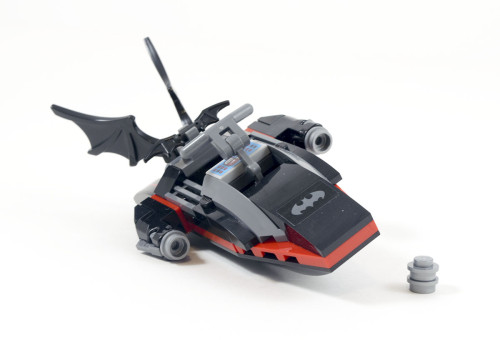 You know, Batman doesn’t always need some wildly specialized vehicle to chase down all the baddies. I get that the implication with the truck is that he’s chasing Killer Croc through the well-documented swamps of Gotham, but maybe an airboat or Batmobile with its huge tires could do the trick. At least those could have some armor… this thing doesn’t even have shark repellent. Mostly, though, it’s just forgettable in the whole scheme of the set. None of the other villain sets needed to give the heroes a vehicle, so not sure why this one got one. Especially since it was already so light on parts… 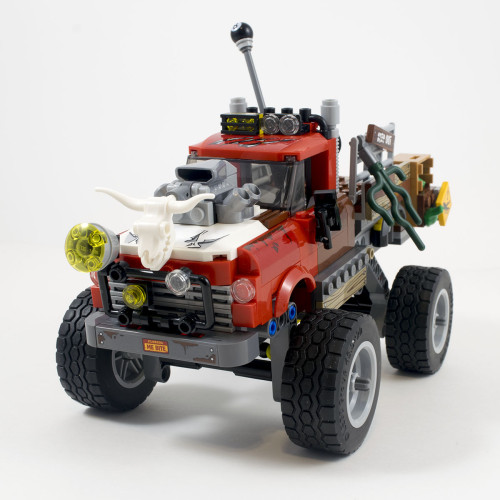 The truck itself is actually a pretty fun, if weird, little build. Because of how the box art is set up, or even the product pictures, what isn’t immediately clear when you look at it is that the 8-ball stick in the bed is the gear shift and a steering wheel extends out from the cab as well. Basically, the whole thing is supposed to be steered from the bed. Which makes it a bit weird to have Tarantula inside the cab on the box. My god, that 8-ball part though, I need so many more of those (and perhaps the rest of the pool balls for a full rack). 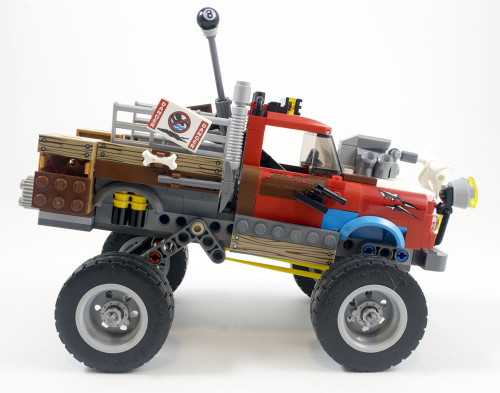 Much like the Joker Low Rider, this set features some suspension work, though here it’s designed more for some off-roading instead of sitting in the place of hydraulics. The side view is where you see the low part count, and wasting parts in the Vehicle, really start to hurt the build. It feels like they could have enclosed the sides and back a bit more to hide the rubber bands and the technic arm, but instead, they’re just out there with some other details faked, like the shocks. 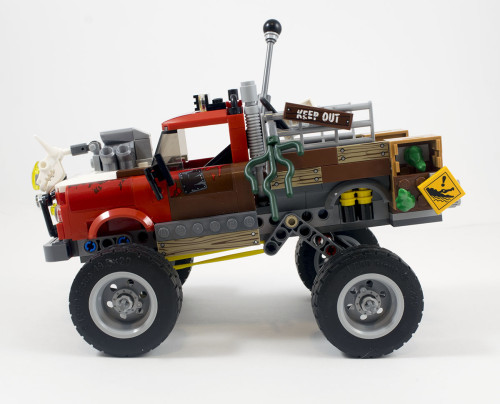 There are some interesting stickered elements on the back, though I really do not get the boxes with sideways frogs. Really, the weird thing about this truck is that it either has great details, like that skull on the front or the signs on the back, or just terrible details, like the exposed techinc parts and frog boxes. There’s very little space in between, and a lot of spots where it feels like something was let off. The tires are a great example like that… those big rubber tires look great, but the axle just sticking out with a little collar on the end looks bad. They either needed to stand them off a bit more or find something to cover it with, like a hub cap. 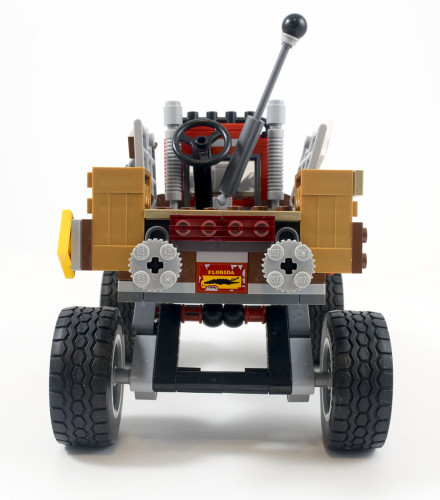 I’ll leave it up to Chief to tell us if this license plate is an accurate description of Florida, but everything I know about that state says it is. Also, I don’t understand why there’s a Florida tuck cruising around Gotham, or if the implication here is that when Batman takes a vacation, it’s just to beat people up somewhere new.

Really, I think this would be a good $50 set, on par with the Low Rider. The problem is that it’s a $70 set, and certainly isn’t better than the Batmobile. I get that a Bigfig adds cost, but I’m really not sure it needed to, especially since there’s another Killer Croc bigfig on the market right now. I would have rather seen him closer to the cartoon looks and a regular minifig, or just a different color of the existing one. Instead, we get a subpar vehicle made worse by the addition of a Bat-jetski, and a build that never lives up to its price. It’s not awful, and you get some interesting figures, but this guy is way overpriced. I’m going to call him aÂ three out of five… worth it on a decently discounted sale, but not at full price.

Verdict: 3 out of 5. You can pick up 70907 Killer Crock Tail-Gator right now on Amazon.com 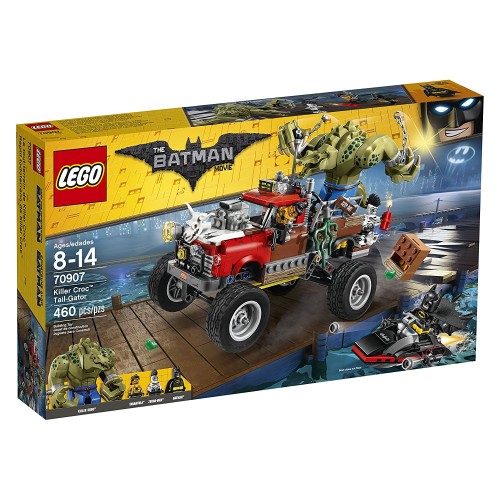