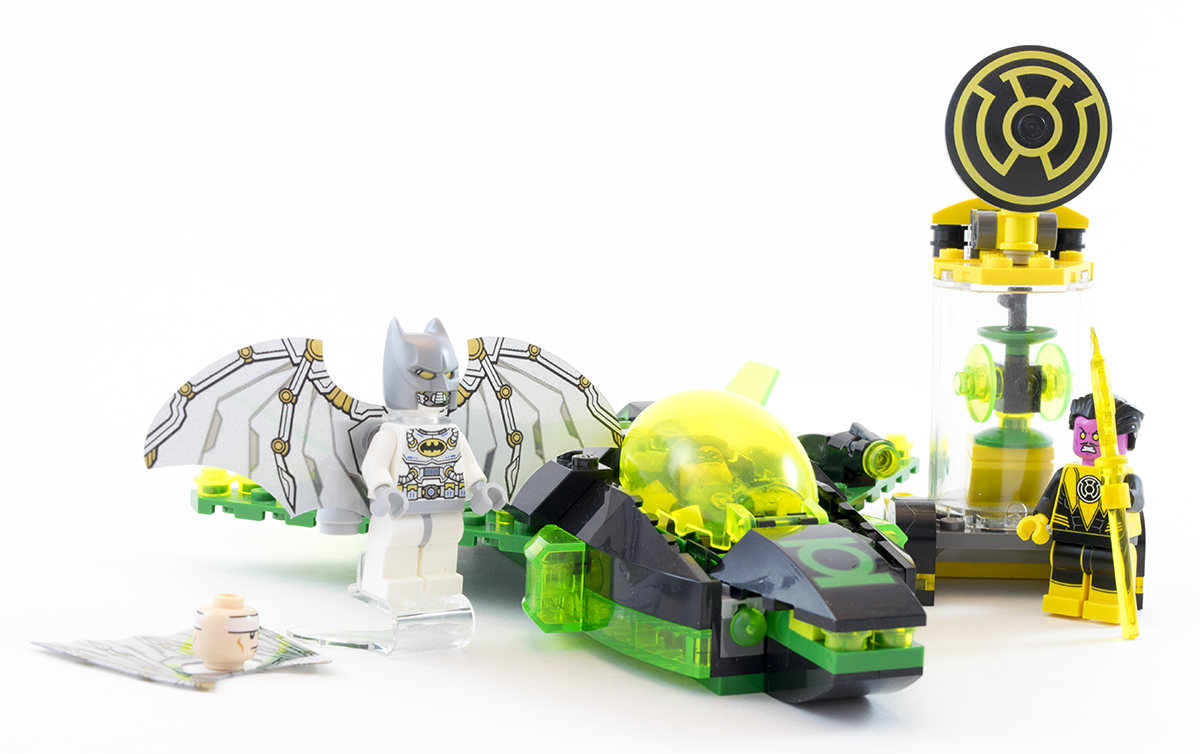 When this particular set was first announced, my reaction, and the reaction of a lot of other people, was “It’s about time!” Usually, when a major character is ignored like this, we have to wait for them to show up in a huge or exclusive set (or, sometimes, both). It’s worse if the character is a woman or minority, so luckily we weren’t waiting for Simon Baz (which is a shame) or Jade (not as much of a shame). That can give us some hope of a Green Lantern Corps set eventually, I guess.

Green Lantern was actually one of the very first figures released for DC Super Heroes, but as a SDCC exclusive that ran several hundred dollars (the shenanigans of the SDCC exclusives has been well documented by Ace). The vast majority of us were never going to own that figure, and even if we had the money to buy it, that money was better spent on sets, not a single minifig.

It’s not like we’re talking about some niche figure here… a Green Lantern of some sort has been a core member of DC comics since the 40s, and some of the biggest stories revolved around them. Of course, given that every major series that involves the Lanterns ends up requiring a reboot of the DC universe, it could be that LEGO was just scared of having to recreate their whole product line if they had him come out. My new product line idea is Batman in everything. Batman the lunchbox! Batman the flamethrower (kids love it)! It’s all Batman!

There was hope when the LEGO movie hit, because some of the funniest parts involved Green Lantern, cast in perhaps the most unique light that I think only LEGO could get away with. Seriously, you give me a Master Builders set with Superman and Green Lantern stuck in gum and it would be a shut-up-and-take-my-money purchase. Instead, we get him, finally, in a Super Heroes release. After DC had a very weak 2014, DC brought their A-game for sets and lead-off with our Green-inclined friend.

This $20 set weighs in at 174 pieces, both of which seem so… uncharacteristic for such an ignored character. I suppose it’s only fair, given that for the majority of their existence, the Lanterns could be easily taken out by a #2 pencil, or the non-Golden Age versions being especially vulnerable to ripe bananas and Wiffle Ball bats. Yes, I know that said weaknesses have been retconned, but my jokes are like my hair: unchanged since the mid-90s. While it seems like a given that it doesn’t matter what the actual set is like, since anyone who collects DC (or really Super Heroes in general) is going to buy this set for one guy, but let’s give it a go anyway…

At least when they gave Thor a nonsense weakness, it involved his primary weapon. He puts it down, and suddenly he was just an incredibly useful doctor (that couldn’t breathe in space, which cost him his life during the whole Infinity Gauntlet fight). It made absolutely no sense, and I think they’re bringing it back in some form with the new Thor series, since our heroine hasn’t put down the hammer for more than a few minutes (and it was less put down, more “stuck behind a door” thing… can’t expect a rookie to get everything right). 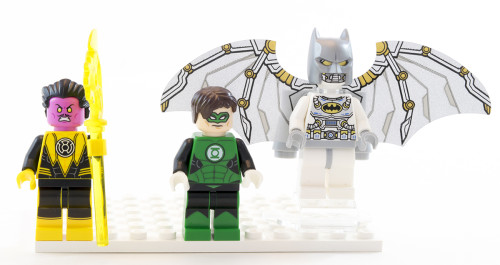 Three minifigs is close to average for a set like this, and all three are brand new. Sinestro, Hal Jordon as Green Lantern, and a space-themed Batman make for a pretty solid showing. Of course, Batman, because… something something Batman. 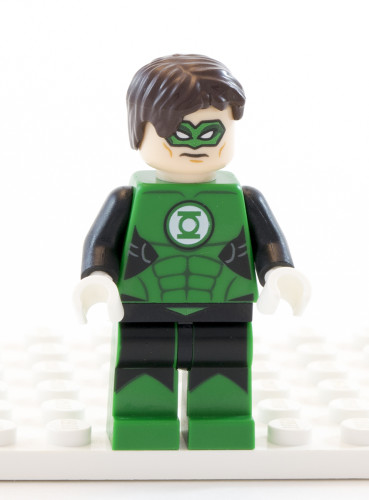 I’m not up on my New 52 (someday I’ll get there), but it’s always odd for DC stuff to feature him as the Lantern, given that he was more defined by all the other (universe wrecking) stuff he did. In the cartoons, , and non-LEGO exploits on the big screen are better left forgotten. Unless we’re talking about a Super-Friends themed Green Lantern, an idea that I could totally get behind. Costume is wrong though.

Edit: Yeah, the animated universe is waaaaaaaaay more convoluted than I realized. What I get for skimming the Wikipedia article on it. Apparently the Green Lantern of choice in the cartoons is “whatever one we feel like, stupid.” 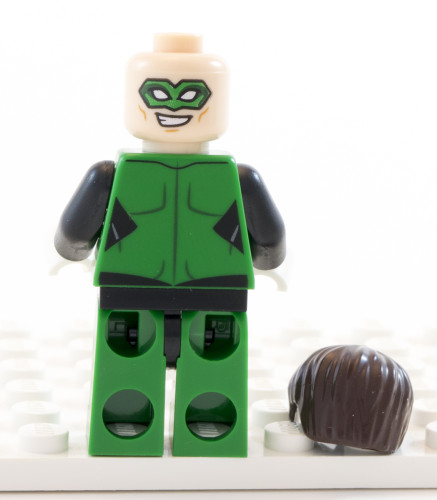 There’s not much I can say about the figure, really. He’s clearly the star of the set because he’s been the huge gap in any DC collection, be it Justice League, Super Friends, or Ryan Reynolds-esque. It’d be hard to screw up the Green Lantern look, and luckily it’s a fairly-generic torso that is just begging for a bunch of different heads to make your own corps. Not sure how you’re going to make the squirrel, but otherwise there are a lot of options here. 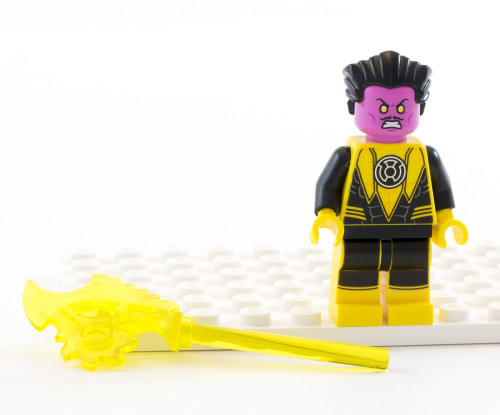 By himself, Sinestro is a pretty cool minifig, and pretty much the Green Lantern villain. The real bonus here is his yellow staff, which features a trans-yellow lightsaber bar! I always welcome new lightsaber blade colors, and yellow will look nice next to some of the pink and neon orange blades that I have. Plus, you have to like any character who can wear a Snidely Whiplash mustache unironically. 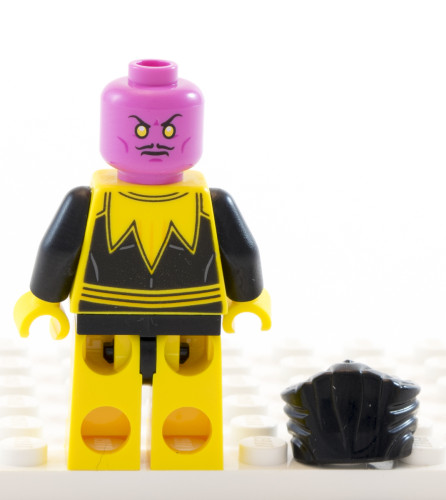 If you’re going to make the Sinestro Corps, his torso is likewise a bit more generic, though that back is very… him. The alt face is what I would call his happy face (which isn’t happy at all). It’s a decent representation of a classic villain. Of course, it wouldn’t be a DC set without some quality issues showing up. As you can see, my Sinestro showed up with a cracked leg, which I need to pester Lego Customer Service about. 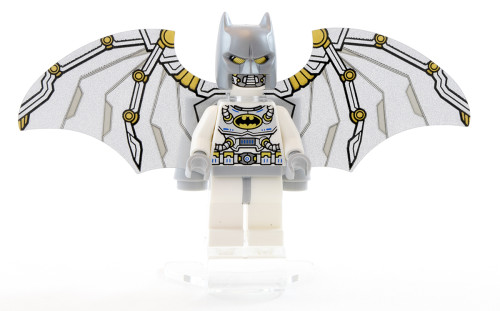 I suppose if you’re going to foist Batman into every set, it’s a good thing to be a pretty awesome Batman. This one is unique from top to bottom. We get the space torso, head, the new cowl in silver, plastic wings (two sets for different looks), and a new backpack piece with two studs instead of one. 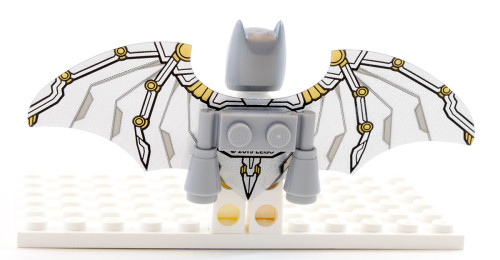 He also comes with one of those new, interesting, and awful spring-launcher. As an idea, I totally get it, and it could be a cool playset feature potentially. However, every one of them that I’ve had fits so tightly on the figure that’s it’s hard to connect (or remove), and will likely break the figure when you put it on there. It also suffers from the same problem that the mini-catapults do, in that to use it properly your finger is basically in the way. The novelty wore off quickly, and the piece was just put aside with that endless pile of brick separators and collectible minifig stands. 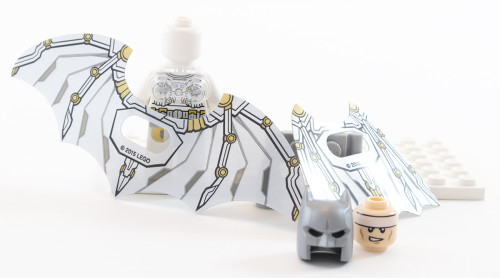 We also get a Batman headband head with our other pair of wings. I’m not exactly sure why we needed that extra head, unless the intention was to let Batman suffocate in the cold, unforgiving emptiness of space. It wouldn’t look right with the silver cowl. Batman only uses Black and sometimes very dark gray. 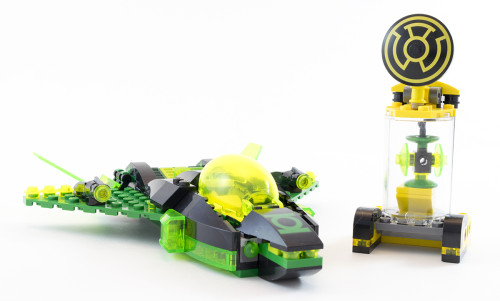 The set itself is pretty basic, with a Green Lantern jet that’s as much black as it is green and a little prison thing for storing a Lantern Battery. The last time the lanterns messed with anything black colored… things got bad (and we were subjected to an absolutely horrible story line that was only redeemed for giving us pirate Batman).

I don’t quite get the concept behind a Green Lantern jet, given that with the power of the ring he can fly faster than most any jet. It also means that he’s concentrating on maintaining a jet and flying said jet, which seems like a pretty inefficient use of power. The jet itself isn’t terrible, but it shares a bit of similarities with the S.H.I.E.L.D. jet from the Helicarrier Breakout set. It integrates some various colors of transparent green (neon, snot, bright, radioactive… I gave up trying to keep the shades straight), a cool Green Lantern slope, and the new stud-shooting gun bricks (as well as flick-fire bricks). 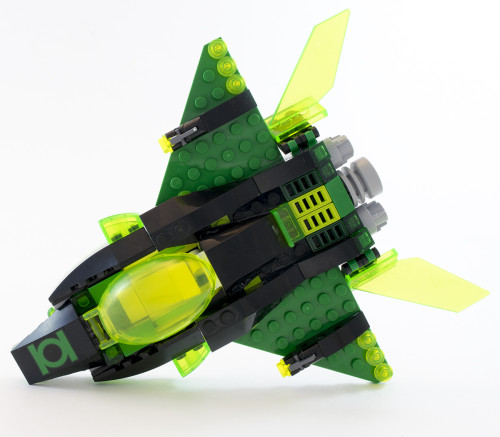 Not much spectacular to the build, and it’s not particularly inventive. The canopy is the weakest area with those huge gaps, but it’s got a decent part selection otherwise.

The real highlight would be the back wings in trans neon-green. I’m thinking some nice Galaxy Squad redux MOCs or perhaps some bug ships with them. The reason that’s a highlight is because looking at the bottom of this thing makes you imagine what you’ll make when you take it apart, because it’s not worth keeping together as it currently is. Not saying it’s a bad build, mostly just a meh build. 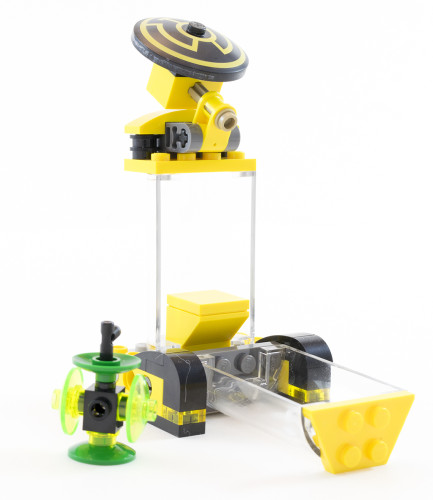 The last section is a small prison section, highlighted in some yellow and glass, to hold a brick-built battery. The battery is a nice touch, but I don’t quite get the whole cage thing. If it was more yellow and meant to hold a Lantern, I could laugh at the whole thing with a terrible joke. But the center is glass, so even if the yellow weakness was still around, I’m pretty sure he could just punch through the clear part. The thing is also on a crazy hinge as well, only held in place by a tiny bit of friction on that top pin. You can get it to fall open just by grazing that pin. So, not an effective cage or container.

The brick-built lantern battery is pretty cool though.

In the end, this set is pretty much what we all thought it would be… a $20 parts pack that we got with our Green Lantern. Getting that core member of the Justice League (and comic relief in The LEGO Movie) outweighs any real apprehension about the set. It was nice that he showed up in such an inexpensive set, even if it is likely the “weakest” of the 2015 DC line overall. The figures alone would make this set a three, and the parts are useful enough that I’m going to bump it up to a four. Go, pick it up, and then start building all sorts of yellow and/or wood things to beat up your Green Lantern minifig. Or torture your Superman minifig by always keeping them together. Whatever floats your boat.

Verdict: Four stars. The ultimate “it’s about time” minifig, some good parts, and a trans-yellow lightsaber blade to go with Sinestro. Also, Batman is there. Buy 76025 Green Lantern vs. Sinestro right now on Lego Shop@Home. 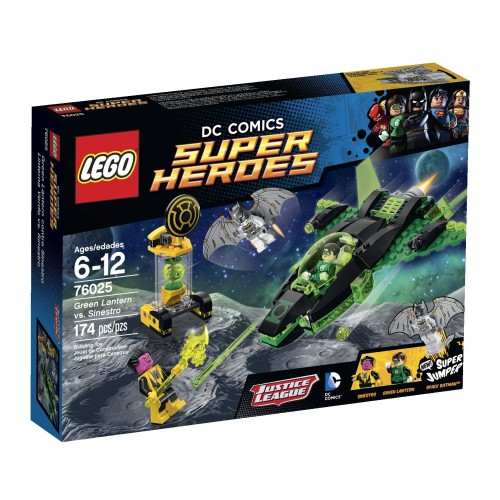