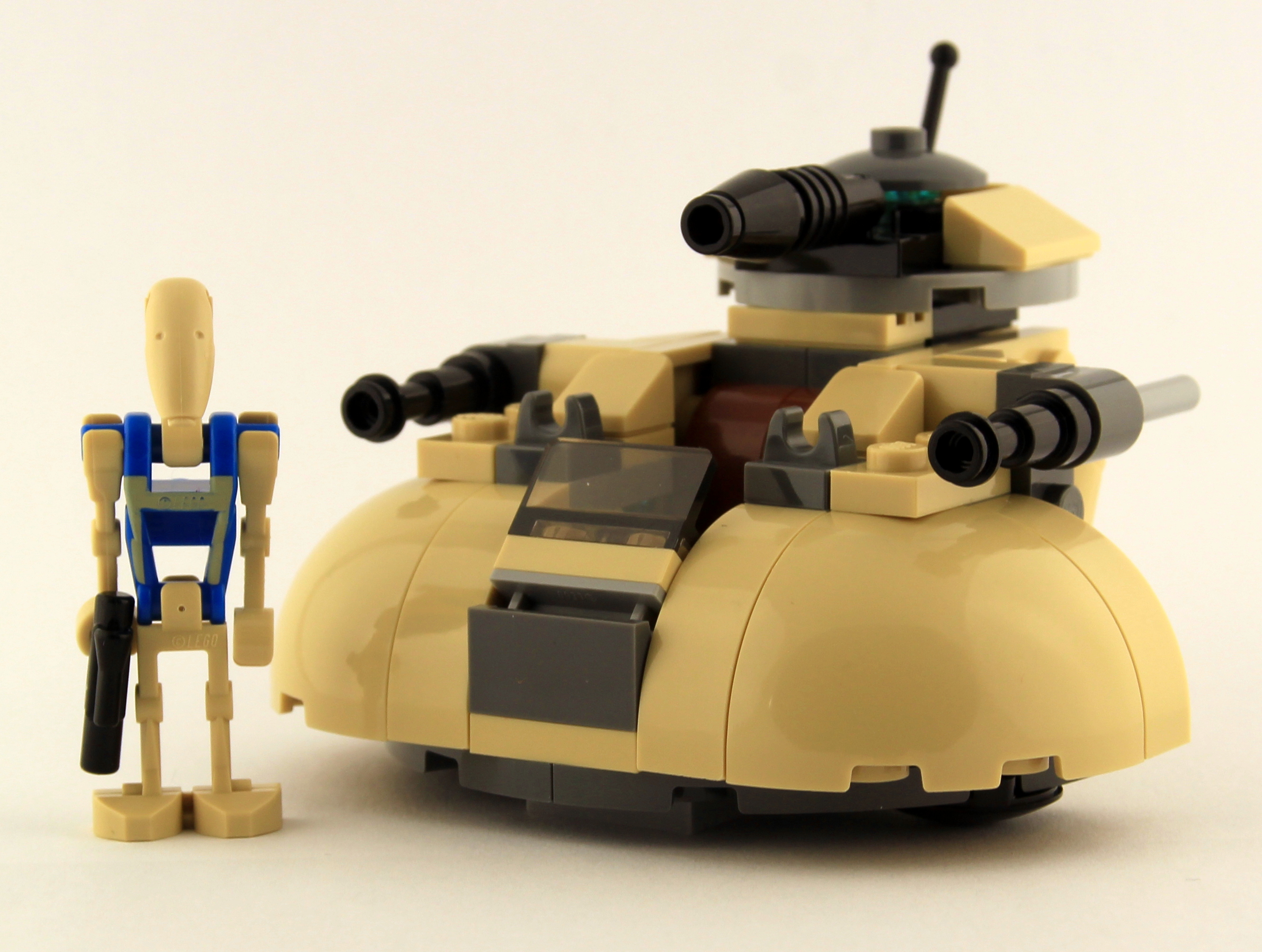 When I first saw the convention exclusive microfighters, I was unimpressed. The Sith Infiltrator came with the shirtless Maul figure that was fairly rare at the time, but the build didn’t interest me. As Ace pointed out in his review, it didn’t even have landing gear or a way to display it for those who were so inclined, but too lazy to build their own. The Boba Fett one I liked because I’m a fan, but the price on these was very off-putting to me. Beyond Maul, they didn’t even come with exclusive figures* to offset the price. At least to me the designs seemed to get stronger as they went along for the most part.

When the Microfighters line was announced and pictures dropped, I was still torn. I was a fan of the Planets line and I wasn’t sure these would be a worthy replacement. From what I’ve seen, these do appeal to the target audience, but I was still torn when they finally hit stores here. I made the decision to get the AAT and a couple of others and skip the rest. The AAT was the first I built and so it will be the first I review. Years ago, it was one the the first Star Wars sets I ever built and I really liked it, so much so that I bought two.

Funny how history tends to repeat itself.

I only have about a half dozen or so of the 1999 Star Wars sets, but the majority were picked up on clearance in 2000. I didn’t want to waste all that money on LEGO and have to leave it behind when the Y2K bug sent us all back to the stone age. When I saw the AAT, I actually bought it at full price and I liked it so much I didn’t hesitate to pick up an extra on clearance later. In my mind I wanted a tan UFO with printing all the way around, but in the end that was stupid and I just preferred to play with the set as it was. Before we get into the set, let’s take a look at the figure included with it. 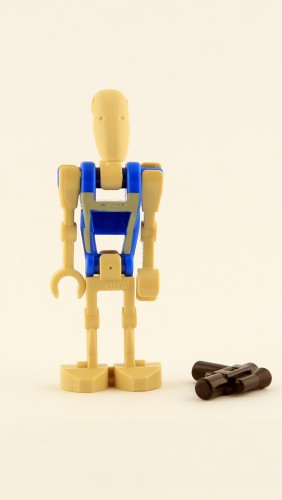 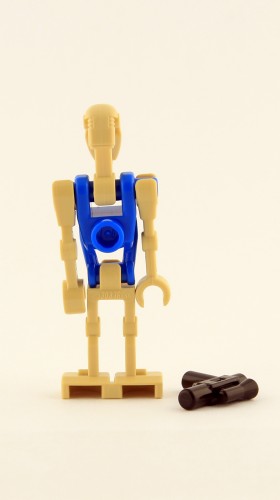 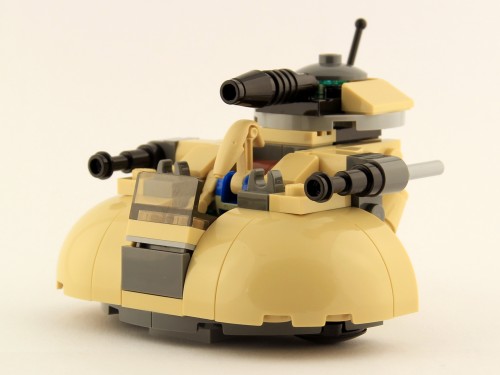 Well, that’s enough about Roger the pilot droid. I do tend to go on sometimes. His best feature is that he sits in this set.

That is easily the most exciting thing I can conceive a battle droid doing at this point. 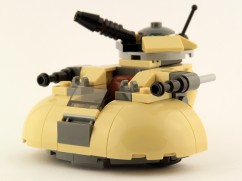 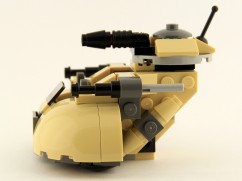 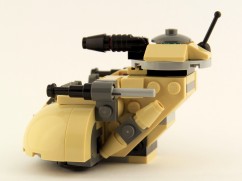 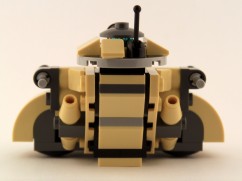 He certainly looks cozy sitting in his big rig and it’s a good look for him. Like many before him, his ride is the only thing interesting about him and it’s not a bad ride.

The build is straight forward with a bit of SNOTing and that is most effective on the power generator… converter… thingys. The 1×1 brick with studs on two sides and tan cones works well and is a nice detail that helps sell the overall look. The back is bland, but sturdy and lends to the stability of the model which can stand up to a decent amount of play with only the odd bit popping off. The front is the money though and wouldn’t have been possible a few years ago, but the 3×3 quarter round bricks and rounded arches sell it. They pump up the base instead of keeping the low, sleek look and that makes the chibi-esque style work for it along with the condensing of the upper section.

The free spinning gun is mildly annoying and makes me think it’s time for a 2×2 clicking version of the 4×4 turntable. The parts assortment is pretty good for such a small set and is the main reason I picked up two right out of the gate. You get some tan cheese and even some 1×2 cheese and dark grey is always a nice accent to a tan build. The side mounted guns being used as missiles is a neat concept, but poorly executed (as more flick fire set ups tend to be) and I doubt it will stand up to much play because the mounts are not very secure. The only other thing I dislike is the windscreen not moving back very far due to Roger and his big feet. I think the screen looks better moved back a bit farther to blend with the curve of the front, but it’s a minor quibble at best.

The biggest problem is the value. This doesn’t feel like a set that’s worth $13 Canadian to me and even at that price (or the $10 it costs south of the border) it is a good parts ratio compared to the usual mini sets that are all tiny pieces. This one was worth it to me for the parts that I’ll find useful, but that is it. I’ll be throwing another droid in the pile tonight. 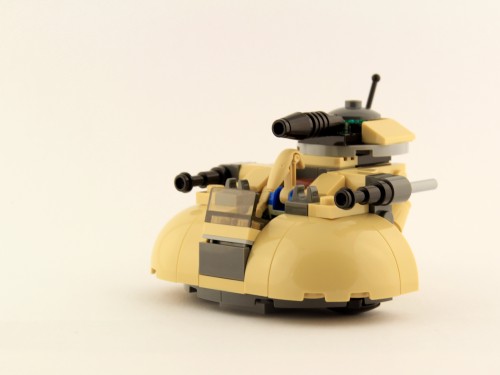 Verdict: I’m going to give it a 3, even though it’s really a 2.5 because it sits squarely between “on clearance” and “on sale”, depending on how you feel about the source material. And how much of a parts monkey you may be. It’s not the best of the bunch, but it’s certainly not the worst because that honour goes to the Clone Turbo Tank. I can’t even begin to bring myself to consider buying that one.

You can pick up 75029 AAT Microfighter on Amazon now! 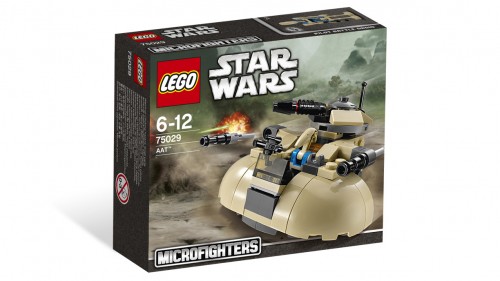 * A new, slightly different head or hair piece, DOES NOT make a figure exclusive. At best it makes it “exclusive”.