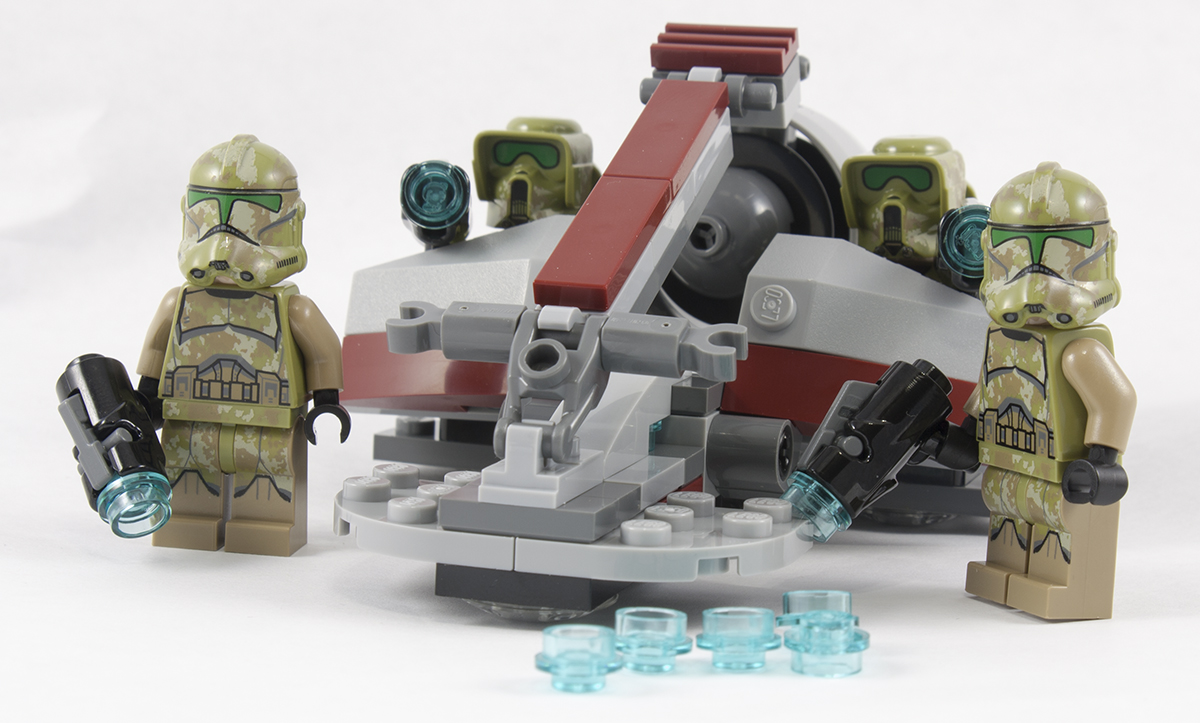 Is it possible to get battle pack fatigue? Maybe that’s why Lego keeps playing with the $10 range with stuff like Planets (which were awesome) and the Microfighters (not as much). Or maybe it’s just that a lot of the recent battle packs have been somewhat underwhelming, with mixes for the type of figures in them or not enough generic troopers to help build up an army.Â

That was my chief complaint with the Death Star Troopers pack, where the Royal Guard figures really detracted from the overall value of the set. The Utapau Troopers set did a better job of some more generic troop types, assuming you wanted to build up an army of troopers that would be able to blend in very well at a Texas Longhorns home game (which, as a ‘horns fan, I can totally get). They weren’t bad troopers, but we’ve had other Sherbet clones recently so it’s good to see a change.

Enter the Kashyyk Troopers battle pack, the third pack we’re getting this year. These are obviously not a very “generic” figure, being dressed up for a Duck Dynasty / Star Wars crossover convention (I’m not sure I want to know what that looks like, but I bet TLC will have it on the air within a year or two), but they all look pretty good. If you were going to build up an army of Clone Troopers, I’m willing to bet you’d rather have them capable of hiding in a jungle than at an AT&T store.

At 99 pieces, this one comes in slightly under the Death Star battle pack and well above the Utapau Troopers. The real question is does it justify your money any better than the other two battle packs (or the existing two you can still get)?

All of the new battle packs feature the new blasters with the flick-fire mechanism to shoot little 1×1 studs. I put together a short video of how well they work, which actually is fairly impressive. There is the obligatory warning in the instructions not to shoot out your eye, but while the shoot looks impressive, it’s still just a 1×1 stud that hits with all the force of a fly bouncing off the window. The new flick-fire cannons in the other sets could do a bit more, but I’m not sure these could take out an eye unless you shot the figure out of a slingshot…

We get two types of jungle troopers here, the standard clones and a couple of Elite Corps clone troopers that look like Scout Troopers but are apparently not scout troopers. I’m willing to bet we’ll see that helmet sneak its way into a scout trooper soon. 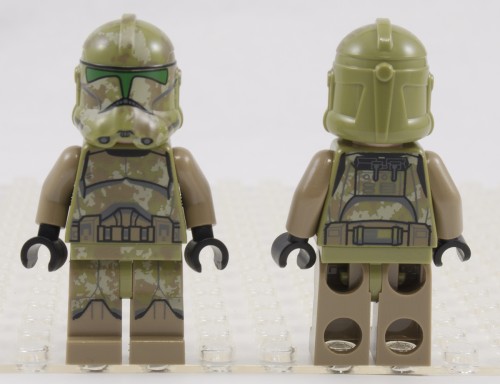 The Clone troopers are the “new” design that we’re getting with the 2014 Episode III sets, featuring the phase 2 helmets. We’ve got the benefit of olive green, better printing, and obviously some new molds. Much like Gree in the AT-AP, the printing on these troopers is far more elaborate than earlier Clones, but it keeps the general Lego feel. I like the camo pattern versus just using green like previous versions have.

The reality is that the more elaborate printing is here to stay, and I like it more when they keep some sort of Lego feel to it. The nice thing with these troopers is that the camo patterns in the torso and legs could easily be adapted to some nifty custom figures, probably the next time we do a Bounty Hunter contest or try to kill Don again with an alphabet bracket. 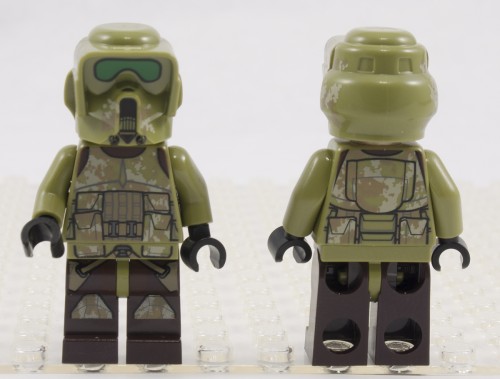 The Elite troopers manage to get one of my (many) pet peeves right, and line up the printing on the pouches and leg details. Funny how that can get done in a $13 set and blown in much more expensive offerings. The camo armor print on the torso is interesting, but the legs are what draw your eye, opting for dark brown and generic enough details. It’s the helmet that steals the show, doing away with the old scout design by adding a closed front and printed visor, and widening and raising the Â flares around the front.Â

The difference between the Phase 1 and Scout clones is particularly stark when you put them side-by-side. While we’ve gotten a lot of Clone Wars and Phase I clone revisions, this is really the first change to Phase 2 since those sets were released nine years ago. The difference on the green BARC trooper is particularly pronounced. In hindsight, I should have snapped a picture of the Clone Wars BARC trooper too, since this new helmet is distinctly different from that as well.

We’re actually getting a pretty big variety in helmets Â thanks to these new sets. For those keeping count, we’ve gotten seven new helmet designs in this release (and six colors of the new Phase II helmet, if you count the 501st Legion Trooper that had the same design in the AT-RT Walker and Z-95 Headhunter). In other words, any chance you have of a nice, uniform looking Clone Corps is sort of out the window at this point. 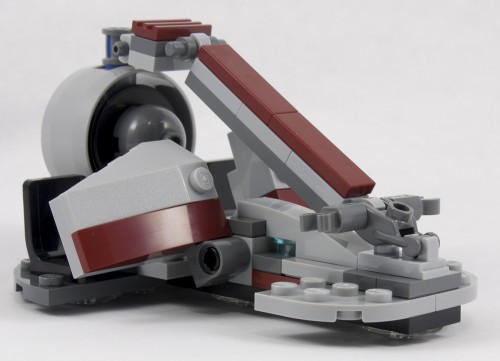 This pack deviates a bit from the other recent trends and gives us a vehicle instead of a gun platform or something for the opposing side. As of late, the packs have gone to smaller vehicles or mixed stuff like tiny vehicles and little platforms. This is like a micro version of the Swamp Speeder, a very overpriced TRU exclusive from 2010. It also appeared in one of the original Episode III sets, the Wookiee Catamaran, one of a long-line of subpar sets from the Episode III releases. 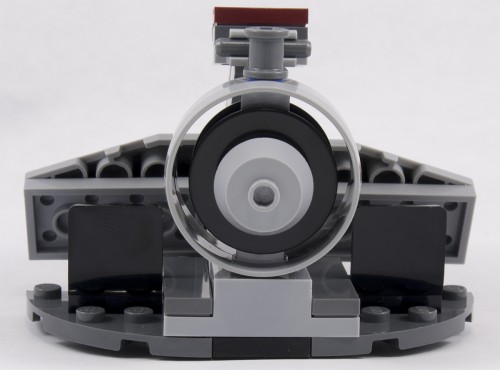 It’s a pretty simple little build, and does include a few nice parts, like the round cylinder for the engine, a light grey R4 head and some dark red curved slopes and tiles. It’s a battle pack, so there’s not a lot of parts to it. The big difference between this and, say, the speeder in the Clone Battle Pack from last year, is that this little guy doesn’t look out of place at all on your Clone Wars display. If you have the existing swamp speeders, these just look like smaller, more mobile versions. As a drop-in to a battle pack, this is up there with the BARC speeders we’ve gotten in the better packs. 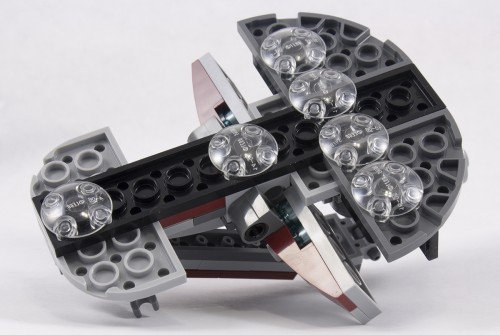 In the end, all of the battle packs have similar part counts but feel all over the place for value. This one seems to come up with the best mix for price and value. At full price, it’s a bit of a stretch, but even a slight sale it will be a great purchase. The clones look sharp and fit with other sets, and I can see using more of these parts in builds than I can with the other packs.

Verdict: 4 out of 5. This is the standout of the 2014 battle packs, and has a lot of utility past the basic build. It also fits well into other sets, like the AT-AP. You can purchase Kashyyyk Troopers right now on Amazon.com, scheduled for a March 1st release! 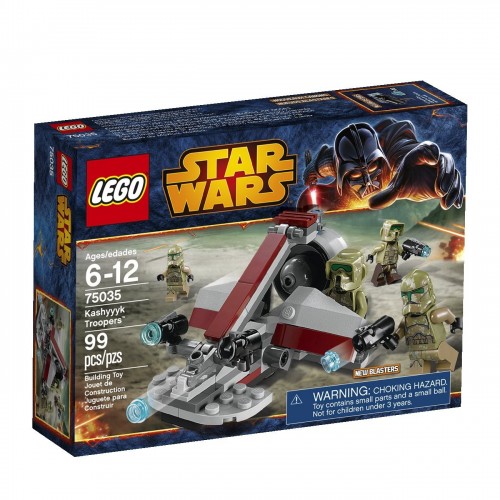