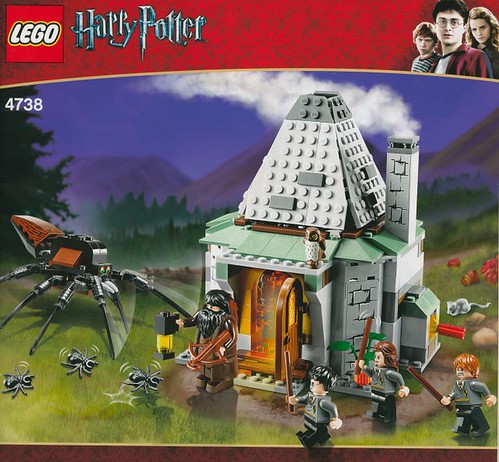 Hagridâ€™s Hut has now received the LEGO treatment 3 times, along with Hogwarts Express (3) and Hogwarts Castle (4+).Â  And why not?Â  They each appeared in several â€“ if not all – of the Harry Potter films.Â  Hagridâ€™s pad played host to at least a few important events in the films, most notably in â€œPrisoner of Azkaban,â€ and as such is at least justified in more than one treatment (if not worthy).

The first release, 4707 from 2001, was essentially just a shell.Â  The build was dominated by wall panels and was repetitive.Â  The only actionable features were the opening door and a rotating fireplace to make things â€œmagicallyâ€ appear.Â  Included only 2 minifigures.Â  The best thing about this model is that it was an octagonal structure, which is accurate to the films. 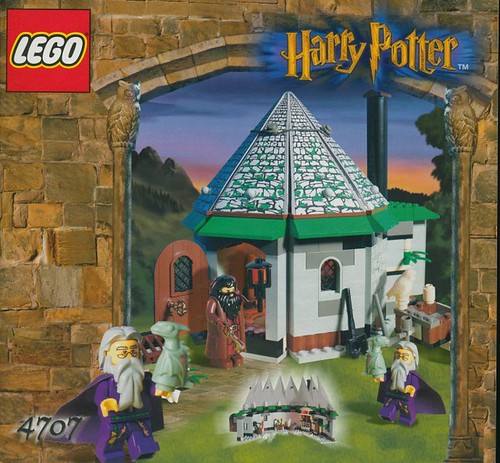 The roof was an abomination.Â  While it looked the part and came to a closed point on top, it was a single, flimsy plastic piece that was held in place by an unsightly rubber band.Â  Also included a rat trap and a hand cart, neither of which have obvious origins (to me, anyway).

Later came the â€œPrisoner of Azkabanâ€ version, 4754 released in 2004.Â  A brick-built roof made this set feel a little more LEGO authentic.Â  Of course, there were a few other changes too. . . 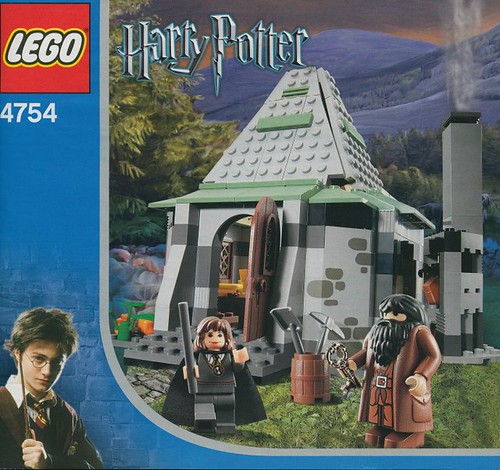 While still a fold-out playset, this one was constructed on a square floor plan, but some corner walls implied the octagonal structure.Â  This set fleshed out both the interior and exterior of the place, offering cooking and dining accommodations and planting a pumpkin patch.Â  There was also a little cupboard and a hidden book within the fireplace.Â  The two figures, though, looked like they came out of a B-list muppet skit. . .

Letâ€™s find out.Â  First of all, we finally get a full complement of figs with the latest release, 4738.Â  Includes our power trio of Harry, Ron, and Hermione, and of course, Hagrid.Â  Unfortunately, the students are all the same figure, the Gryffindor school uniform w/ black legs, grey sweater, red/gold tie.Â  The only thing that separates them is their face printing and hair pieces. 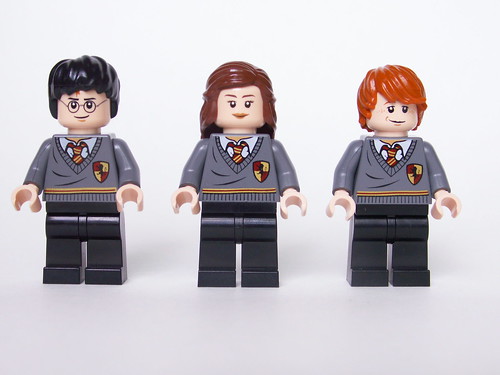 Ronâ€™s is a dark orange version of the Skater, Surfer, and Soccer Player from the collectible minifigs.Â  Hermioneâ€™s is the same piece thatâ€™s shown up in the Indy line, Castle playsets, etc.Â  Harryâ€™s is Harryâ€™s.Â  All three have double-sided head prints, both happy and angry/determined/indignant/scared. 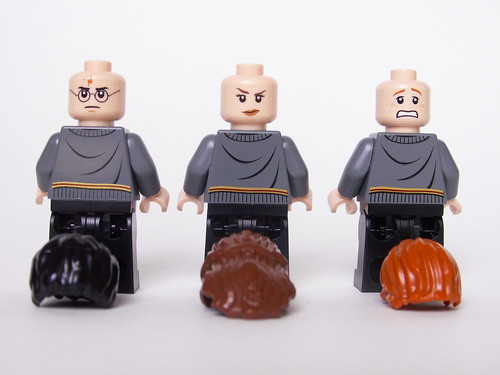 Hagrid has seen a great improvement over previous versions.Â  While the legs remain static, this is the first incarnation that has articulated hands.Â  His face looks less muppet-like, and the printing of his tunic and jacket are far more detailed than in the past.Â  This set also includes his trademark umbrella-wand.Â  The updated version: 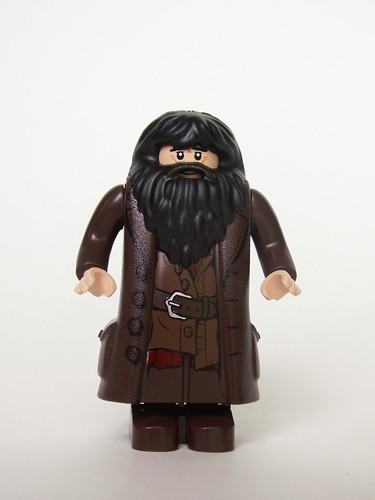 And the Hagrid of the past: 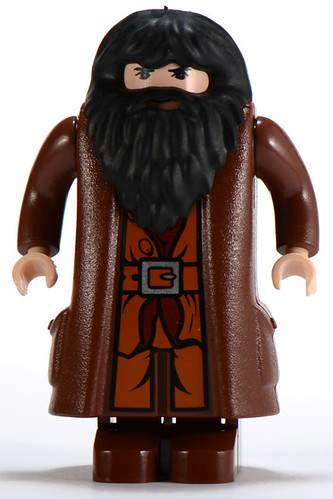 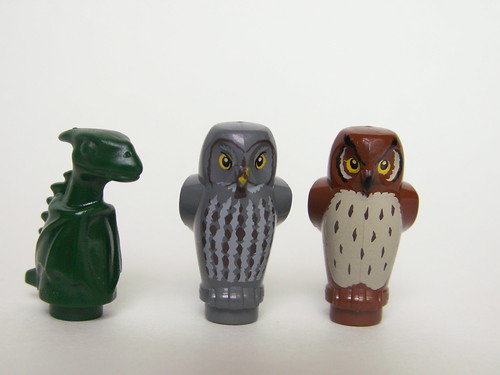 Aragon the acromantula also makes an appearance in this set, making this a throwback to the 2nd film, â€œChamber of Secrets.â€Â  Why they decided to dig up material from that far back seems a little strange to me, but câ€™est la vie.Â  Aragon gets the printed treatment with both his eyes and abdomen.Â  With all these critters running around, could it have been that much trouble to also include his loyal mutt, Fang? 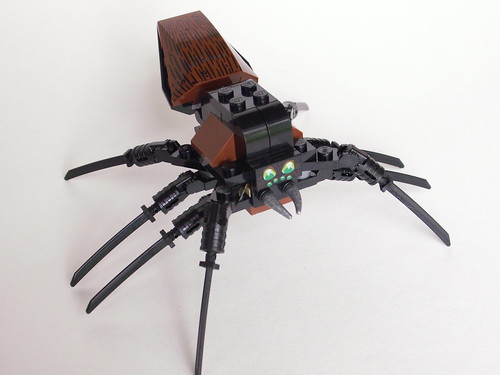 Upon first glance, the latest hut looks virtually identical to 4754.Â  But they are similar only in floor plan and overall structure.Â  Upon closer inspection, 4738 has a more homogenous look, which is an improvement in my book.Â  The hut should look stoney and mottled to a degree, but 4754 was one of the worst cases of â€œrandom brick pileâ€ youâ€™d ever laid eyes on. 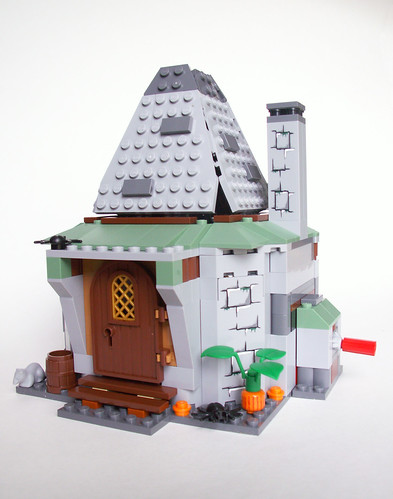 Also, there are a few updates with newer pieces, including the doors, window lattices, etc.Â  The pumpkin patch uses those jack-o-lantern heads from the Monster 4 game, just turned away so the faces are hidden.Â  A little mushroom patch on the opposite corner also includes some printed dishes which are lovely, if not a little single-purpose.

The corner walls and chimney are stickered, which is a little disappointing.Â  They probably went that route to include a little more detail, but come on, theyâ€™ve been printing on those wall panels since the 1980â€™s!Â  Also annoying is the fact that the roof panels are not finished to create a closed roof, instead leaving a large hole at the top.Â  Oh yeah, and the ugly red technic connector jutting out from the side of the house.Â  Couldnâ€™t they have used a less assuming part, like a technic towball?

Anyway, open it out, and the interior is jam-packed with accessories and details.Â  Keys, axe, potion bottles, broom, fish, wall picture (sticker), window seat w/ hidden compartment, houseplant, even a couple of architectural details on the doors and window.Â  The fireplace is scaled down from previous versions, but the highlight is a light brick to make the fireplace glow (makes the hut glow at night, too). 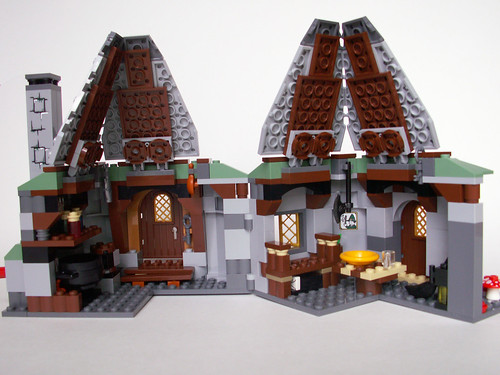 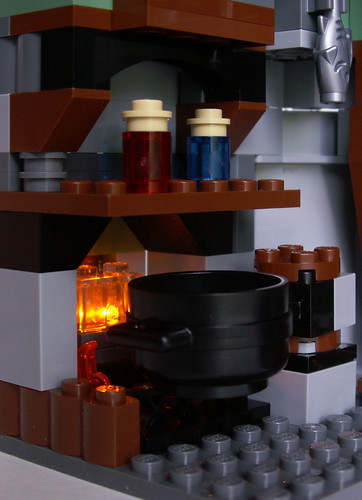 Really gives the place a slightly disheveled feel like in the movies.Â  But itâ€™s so much packed into such a small space that itâ€™s difficult to access anything.Â  Maybe easier for younglings with smaller hands, but my efforts to poke around inside bring vivid pictures of this film.

As for the build, the process is pretty straightforward.Â  Itâ€™s a square-ish building that is roughly symmetrical, so not too many surprises.Â  The most fun part about it is discovering all of the little details as they are put into place.Â  Also, this set comes with a nice smattering of parts, including some sand green slopes, light brick, clip bricks, wall panels of various sizes, and a few other odds and ends.

It should be noted, too, that previous versions were at the $30 price point and hung around 300 parts.Â  4738 is $10 more and weighs in at nearly 450 parts, so it fares a little better than the golden ratio, unusual for a licensed set and almost makes it worth it in and of itself.Â  This is the most complete Hagridâ€™s Hut to date (and probably ever).Â  Itâ€™s got lots of goodies inside and out.Â  It looks good, but not amazing.Â  If they had done away with the spider, maybe they could have made it look a little more impressive.Â  But Iâ€™m more of a model guy and less of a playset guy, so what do I know?Â  At least the parts offerings are better than average.Â  So even at MSRP, you really canâ€™t go wrong here.Â  If you catch it on sale like I did, even better!