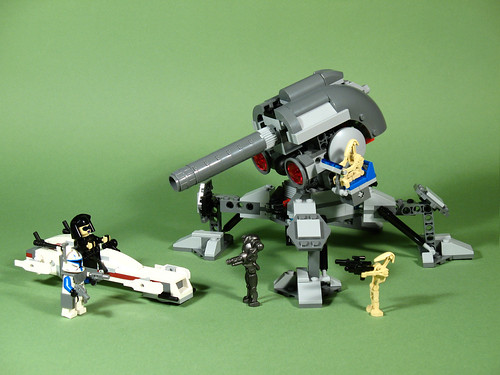 Sometimes a set comes along that looks so ridiculous you just can’t help but feel sorry for it. Then you realize it’s just a box of parts and the idea of feeling sorry for it is itself ridiculous. This is one of those times.

I’m going to preface this with a disclaimer: my opinion on this set is heavily biased, not due to the set itself, but for the source. The Proton Canon is flat out the worst weapon in the Clone Wars line up (*so far at least, I trust something worse that I don’t know about will make it into a set eventually). This isn’t “Don’s being OLD again and hating on Clone Wars for no reason” – I just can’t see any logic to it’s design. There are plenty of autonomous spider type droids already, so dumbing this down to where it needs a pilot is the first mistake. Putting what is essential a ship’s battery cannon on a mobile platform is a great plan, but turning it into a walker as opposed to a treaded or hover vehicle at the expense of mobility pretty much defeats the purpose. But the nail in the coffin is the lack of a magazine. It has to be reloaded manually, for every shot, by a pair of easily distracted battledroids that might as well walk around blindfolded with targets painted on them. Also, it looks funny. 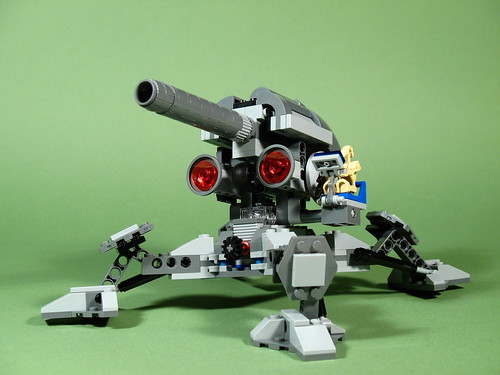 Build Quality and Play Features: As far as the construction is concerned, I supposed it could have been worse. If nothing else it’s a fairly sturdy build, and the spring missile is always fun because it actually works. If I had a single word of praise for this it would be the lack of flick fire missiles. 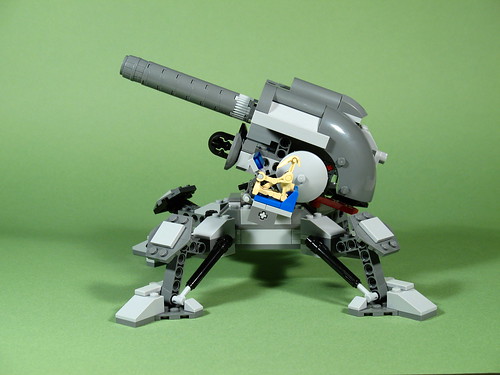 The leg articulation faithfully reproduces the poor range of motion in the real walker. Official sets have never wowed me in this regard and this about par for the course, but it’s very frustrating when you try to stand the thing at an angle and none of the feet are flat on the ground. Obviously they had to skip the knee joint so it could hold itself up but I wish they would have found a way. My other main complaint is how unfinished it looks. From almost any angle you can see the undersides of different parts, studs that seem like they should have been covered, and exposed Technic elements. 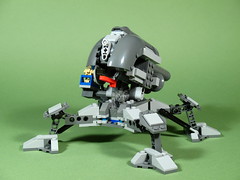 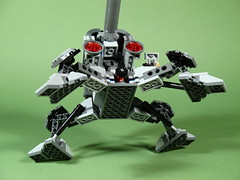 Swoosh Factor: The walker, clearly, is as far from swooshable as you can get if you omit fixed structures like playsets. But the BARC Speeder is practically made for swooshing. 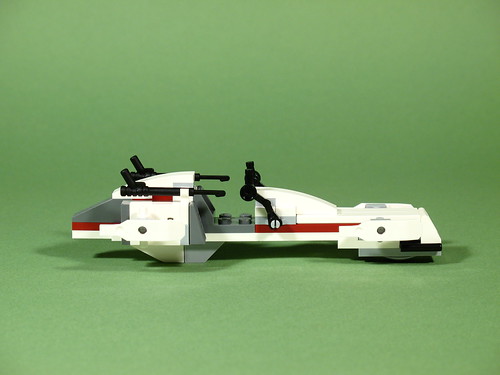 The issue I have here is we’ve seen it before, in the Clone Trooper Battle Pack. I still like, but I would rather have seen something new. I almost feel like it was included as an apology for the walker. Also, you can stick one of the Battledroids under it, so that’s fun. 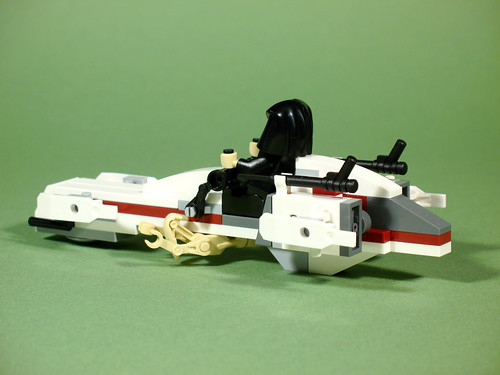 Accuracy: As much as I dislike the source, I still would have appreciated some extra effort to make the set look like it. Part of this is from the exposed undersides and innards I mentioned above, but all in all it feel like a rough draft of a set where they didn’t go back and check the reference images. Most notably, the “face” isn’t proportioned right, and leg details just don’t match up. 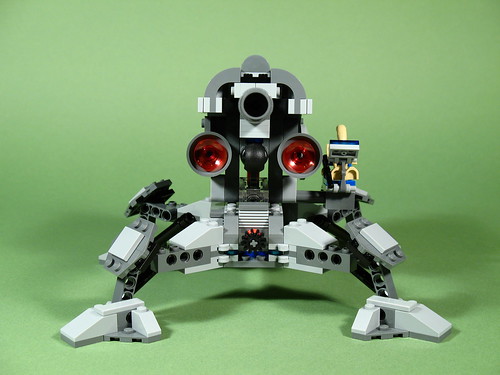 Minifigs: For the Separatist you get a pair of basic Battledroids and one Super Battledroid, but unfortunately no Geonosians. Big missed opportunity there. The set is called Battle of Geonosis after all. Rex is as cool as ever and now a bit more accessible, and then there’s Jedi Master Luminara Unduli. Are you sitting down for this? For a Clone Wars figure she’s actually quite nice. Never expected to say that about a CW style figure. Head and headdress feel a bit more disproportionately large than usual, but the print designs look good and she even has an alternate face on the back with a cool visor pattern. As a stand alone figure, I approve. Definitely better than the piercing dead eyes of her earlier light-up-lightsaber minifig. 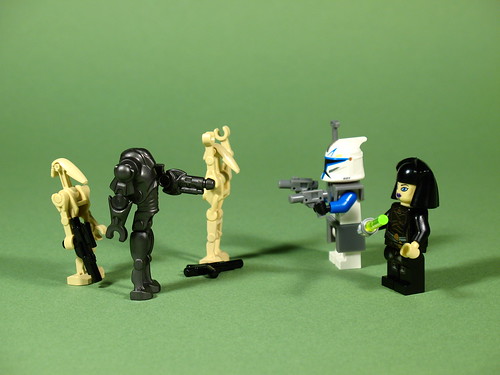 The catch? She’s half of a pair, the other half being Barriss Offee… and Barriss has never had a Clone Wars edition. Put the two together and things get weird. 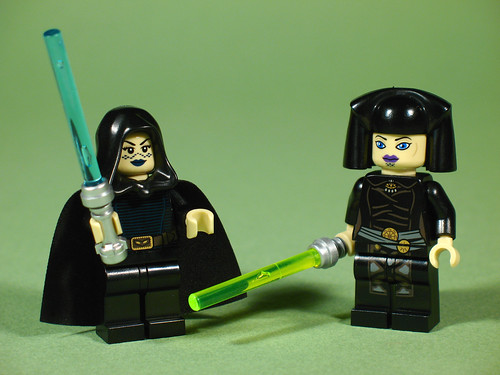 Suddenly Unduli looks like something off of a parade float, or (and now I am being OLD) like someone switched on DK mode from GoldenEye. Swapping their hoods makes the difference in style less obvious at least, but that doesn’t quite quell my mild sense of revulsion. I actually would have preferred the Swamp Speeder set be sold under the Clone Wars banner if it meant these two would fit together (because I know there’s no hope for a normal style Unduli now).

Value: Shop@Home has this for $39.99, and given the trend of pricier licensed sets I would say that’s about what should be expected for the kit. You do get some interesting parts here even if they don’t look to impressive once it’s all put together, and the minifigures are acceptable. 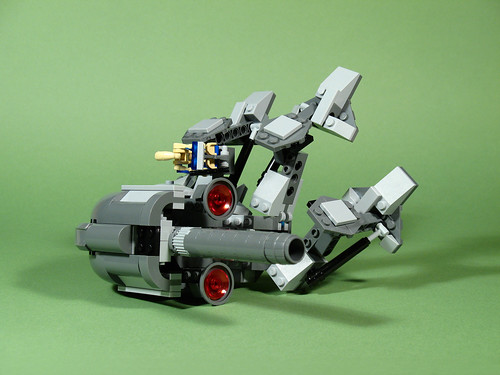 Summary: Ace only made me review this because he knew I would hate it. And he was right. Someone not as biased as me might not mind so much, I’ve read the reviews on Shop@Home and kids seem to love it. But not me. If anything, wait for a sale or clearance. 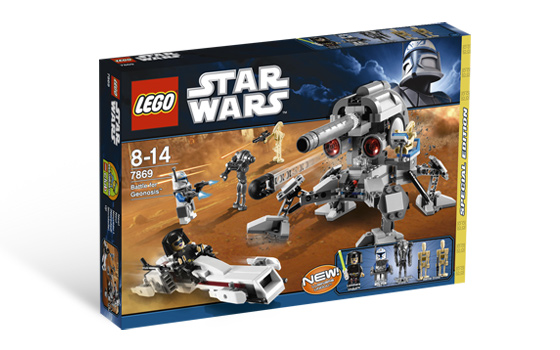