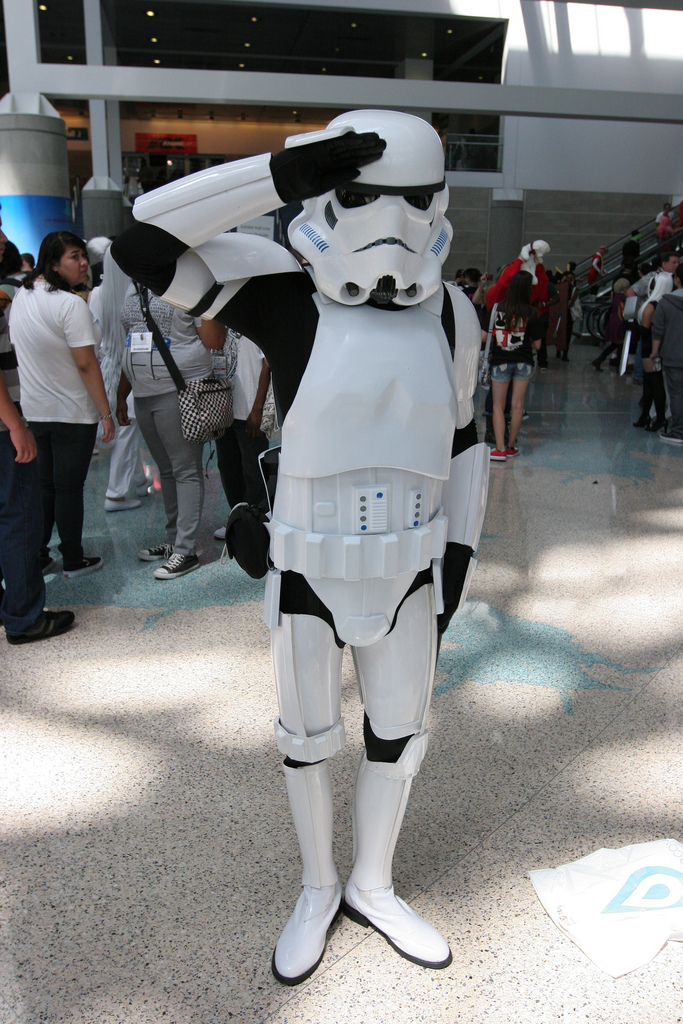 Just a fair warning, this post is completely off-topic, but since I used this site as my press credential to attend Anime Expo, I figure I should at least post about my experience there this year. So feel free to stop reading here.

Most of you may not know this about me, but I’m somewhat of an anime fan, and a bigger fan of cosplay. Usually when I attend Anime Expo or San Diego Comic Con, the biggest draw for me are the sometimes crazy sometimes awesome costumes people wear. The level of craftsmanship and attention to detail can be astounding.

The Stormtrooper above was one of two Star Wars-themed costumes I saw at AX. The other was an older gentleman dressed as Old Ben Kenobi which I didn’t take a picture of. It’s strange because people in costume is such a large part of the Star Wars fandom that seeing it at an anime convention seems so out of place and odd. I’m thankful to have this pic to make this post somewhat relevant, even if it is a thinly stretched line. 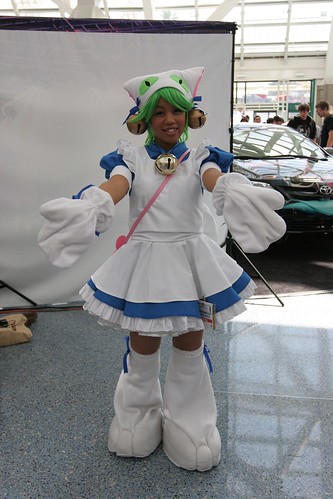 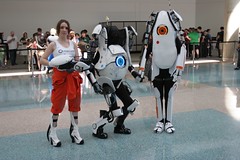 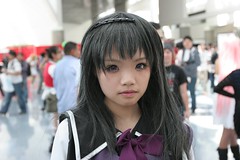 I attended two days of the four-day event, snapping pics whenever the opportunity presented itself. It’s possible to go the show, and I imagine just about any anime convention, without paying a dime. An attendee pass can get you into the dealer hall, artists alley, and any one of the various programs going on. But if you just want to take pictures, you can just hang out in the lobby and snap away unhindered. 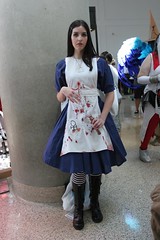 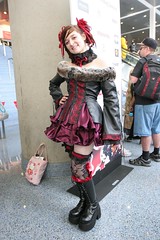 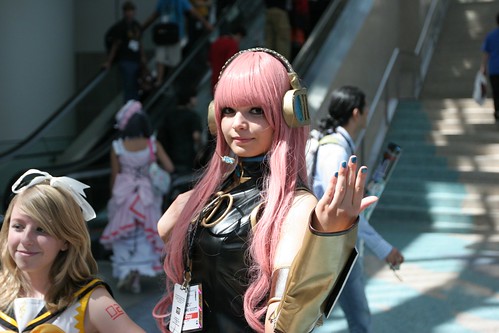 I was fortunate enough to get a press pass due to my affiliation with this site, and it came with a few perks that I took advantage of. One of my favorite anime series is Last Exile, and it was announced some time ago that the world premiere of the sequel to the series would happen at AX. There was a long line to enter the screening room, but luckily there was a separate line for press. When I rounded the corner to get in line, I was the first one to show up. It was awesome. 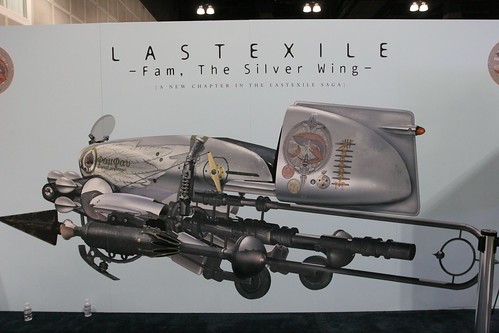 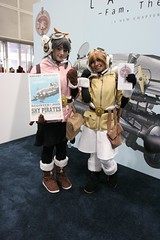 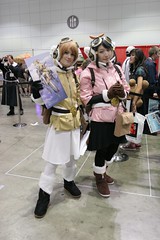 Anyway, the first episode was screened to a packed room 4 months before any audience in Japan would get a chance to see it. There were some conditions laid out before us, though. All camera equipment had to be checked in. Anyone caught recording the screening would be banned from AX for life. And if someone was to get caught, the rest of the screening would be canceled for everyone else in the room. The screening went off without a hitch. There was a brief Q&A session afterwards with some members of the production team, and an autograph session after that. I’m looking forward to the series when it debuts later this year. 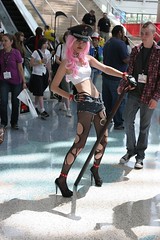 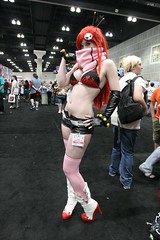 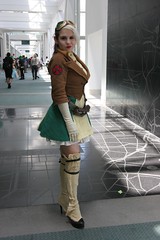 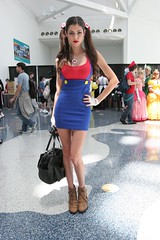 The night of the second day had a very special event. It was the first North American appearance of digital diva Hatsune Miku (Hatsune Miku on Wikipedia). As a press attendee, I was given a free ticket and given all the hype around the character, I wanted to see what it was all about. I was extremely curious about the sensation surrounding her (if still don’t understand who or what Miku is, I suggest looking her up on Youtube) and didn’t quite “get it”. Well, after dinner and, ahem, a few drinks (really, just a few), I entered the Nokia theater. 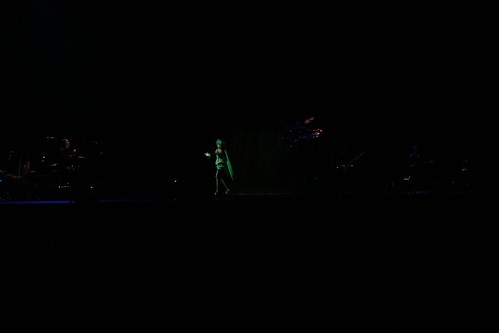 The pic above is Miku being projected onto a glass pane that stands right in the middle of the stage. My seat was off to the left and the viewing angle worked against me as she seemed nearly transparent during the songs. Those seated in the center sections had the best view. If you focus only on Miku, it’s almost like you’re watching an anime music video, but you’d have to try hard to ignore her back up band consisting of real people. I’ve been to my fair share of concerts and at some point, the singer will introduce their band members one by one. Miku was no different. The whole experience was surreal to say the least. Perhaps it was being under the influence of a few alcoholic beverages, but I started to see what everyone else saw in her. It’s not just the synthesized voice, the digital projection, or the long, flowing, teal-colored pony tails. It was an anime personality brought to life, the closest any one will get to experiencing live anime. 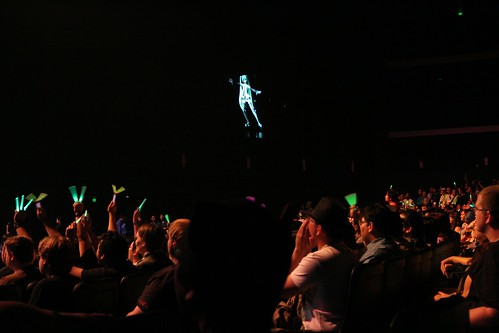 If Miku graced us with her presence next year, I’ll be sure to go see her again. I might even wave a glowstick. 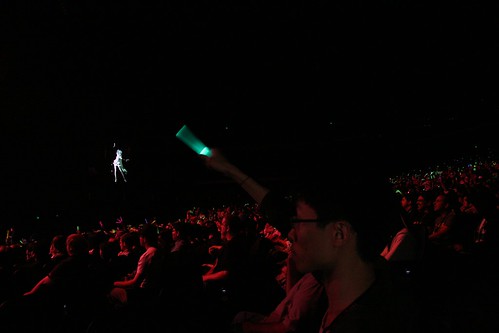 I had a blast at AX this year, just like I do every year. To see the rest of my pictures, check out my Anime Expo 2011 flickr set