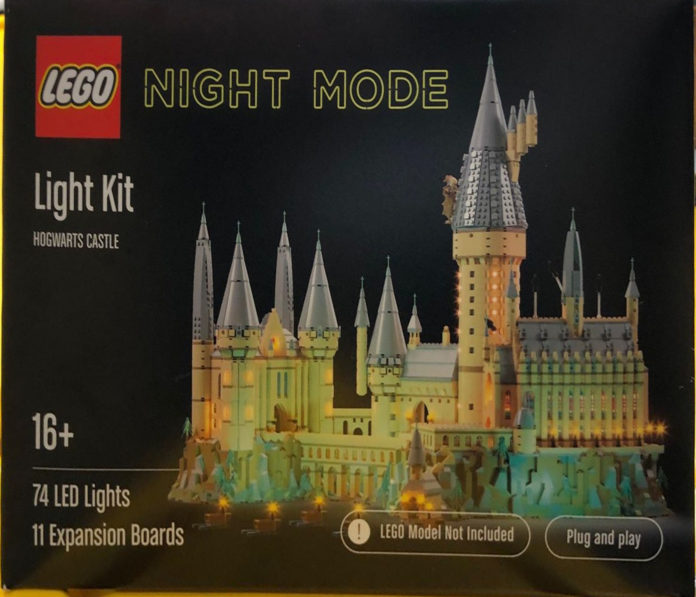 At LEGO World in Copenhagen, The LEGO Group unveiled a new series of official lighting kits and calling it “Night Mode”. Five kits in all were shown off tailor-made for 71043 Hogwarts Castle, 10260 Downtown Diner, 21318 Tree House, 10265 Ford Mustang and 41374 Andreaâ€™s Pool Party. These were previewed to gauge reaction and possible demand but given the pricing it would be a hard sell. Brickset is reporting 1449DKK (approx Â£160 or about $200 USD) for the Hogwarts Castle set and the Tree House kit as priced at 649DKK (approx Â£70 or about $90 USD).

They are bat-ess CRAZY to consider charging that much. Given the prevalence of lighting kits from third-party vendors all over Amazon and eBay, LEGO’s entry to the lighting market comes a bit late. The only saving grace to that they are officially branded a LEGO item, and because of that, integration into an existing model might be better. But at those prices they are a tough sell. Similar kits for 71043 Hogwarts Castle on Amazon run from $89-$140. Buying the castle and the Night Mode kit together, assuming the exchange rates are true, you’re looking at $600.

LEGO’s offered lighting before but they were expensive and clunky. Seems they are staying true to their roots by keeping it expensive.

I like the idea of Night Mode, and it might be worth getting on some of the more expensive display pieces that would never be broken down into parts. The Mustang in particular looks pretty neat. But the cost, man, the cost! That’s a lot of dough for an already expensive hobby. Still, despite that I am curious how the integration will be, what one gets in a kit, if it’s battery operated or if it can be plugged into an outlet.